Voted Bishop of Christoupolis Emmanuel (whose secular name is Ioannis) Sfiatkos was born in Duisburg, Germany on 14/01/1977. He studied at the Orthodox Theological School of the University of Munich (Ludwig-Maximilians-Universität München), from which he graduated in 2001. He then taught religious education at the European School and the Klenze-Gymnasium in Munich.

On November 20, 2004, he was ordained a Deacon by Metropolitan Augustinos of Germany and Exarch of Central Europe at the Holy Temple of All Saints in Munich. He received the office of Archdeacon on the day of the Dormiition of the Virgin Mary, on August 15, 2005.

On November 26, 2005, he was ordained Presbyter by Metropolitan Augustinos of Germany at the Cathedral of the Holy Trinity in Bonn. He was appointed pastor of the Holy Temple of the Assumption of the Savior in Berlin and was elevated to Archimandrite on December 25 of the same year.

Ecumenical Patriarch Bartholomew elevated him to an Archimandrite of the Ecumenical Throne in 2008.

From 2006 to 2009 he was president of the Orthodox Youth Association of Germany. In 2010, by a unanimous decision of the Orthodox Episcopal Assembly in Germany, he was appointed its first Commissioner in the Federal Government of Germany and in the German Parliament, a position he holds to this day.

He has participated in many theological, interfaith and intercultural conferences and has represented the Ecumenical Patriarchate and the Holy Metropolis of Germany in federal events.

Elected Bishop Emmanuel will be the first Bishop of the Holy Metropolis of Germany to be born in Germany.

His ordination as Bishop will take place in Berlin. Details will be announced later. 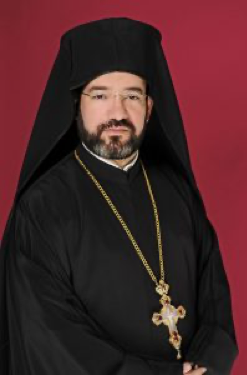 On September 12, the parish schools of the Archdiocese of Thyateira and Great Britain begin

Emmanuel was ordained Bishop of Christoupolis

Bishop of Christoupolis to be ordained in Berlin on July 11

Archbishop of Thyateira at Cathedral of Saint Nicholas in Shepherd’s Bush, W. London

Metropolitan of France: Many Saints lived in France who are shining example for us