Deputy Foreign Minister Diamataris meets with the Metropolitan of Zambia

The charitable and missionary work carried out by the Metropolis of Zambia was the main topic during the meeting held today at the Ministry of Foreign Affairs.

Metropolitan John wished the deputy minister well in his new duty. Then he referred to the educational work carried out by the Metropolis, which contributes to the dissemination of the Greek language and culture while being a point of reference and recognition of the Greek community in the region.

Antonis Diamataris thanked the Metropolitan, wished him much success in his difficult task, and expressed his intention to continue providing medical supplies in cooperation with the Ministry of National Defense to relieve the refugees in Zambia.

The deputy minister hosted a luncheon in honour of Archbishop Nikitas of Thyateira and Great Britain last night.

In his address, Antonis Diamataris congratulated the Archbishop on his election in Great Britain, wished him much success in his important mission and stressed that Greece would always be a source of assistance in his work.

On his part, the Archbishop thanked the deputy minister, referred to their friendly relationship and emphasized that he looked forward to his valuable assistance in the accomplishment of his mission. 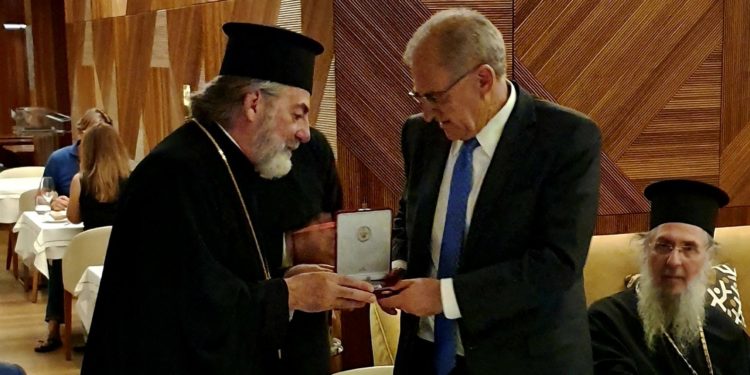 Patriarch of Alexandria at Sts. Constantine and Helen church in Cairo

Patriarch of Alexandria extended condolences for the loss of Dr. Tebebe Yemane Berhan

Patriarch of Alexandria: We owe a big thank you to Eleni Vafiadou for what she offered

10th anniversary of enthronement of Metropolitan of Zambia

Metropolitan of Chersonese met with the Archbishop of Athens