A man with a significant contribution over many years to the Greek Orthodox Church and the wider community was honoured on Wednesday, 6 January, by the Holy Archdiocese of Australia. This was the president for many years of the Parish-Community of St John the Baptist in the suburb of Parramatta in Sydney.

Koditsis was awarded the Gold Cross of St Andrew in an emotion-rich atmosphere during the Vespers service at the Church of St John the Forerunner. The award was made by the Chancellor of the Archdiocese, Bishop Emilianos of Meloa, representing Archbishop Makarios of Australia who, unfortunately, could not attend due to other commitments. Bishop Emilianos conveyed to Koditsis the cordial wishes of the Archbishop as well as his fervent congratulations for the commendable work he has performed and his contribution to the Church.

Fr Dimitri Kokkinos, Parish Priest of St John, briefly described Koditsis’ valuable contribution not only to the Parish of Parramatta but also to other Greek Orthodox parishes in Sydney and to the Holy Archdiocese as a whole. “Vassilis Koditsis worked for this parish during difficult years” he noted and continued, “he was president for many years. He was a pioneer in the construction of the former church on Hassall Street, not only in the capacity as president but also as a self-taught architect, who designed the church and was responsible for overseeing it. He was so effectual that the church was built much quicker and at a considerably lower cost than what was expected by those who knew about these works. All this without any remuneration and, as I mentioned, during difficult years.”

At this point, Fr Dimitri stressed that the labour and contribution of Koditsis was not only confined to the Parish of St John. He recounted that it was he who designed the beautiful Sydney churches of St Spyridon in Kingsford, St Euphemia in Bankstown, St Raphael, Nicholas and Irene in Liverpool, as well as the church of St Nicholas in Canberra.

“There are many other works that I am not aware of and, therefore, I do him injustice”, Fr Dimitri characteristically pointed out and, referring to the testimonies of the parishioners of St John and of his predecessor, Fr Nicholas Tsouloukidis, he praised the ethos, humility, patience and the spirit of cooperation of Vassilis Koditsis. 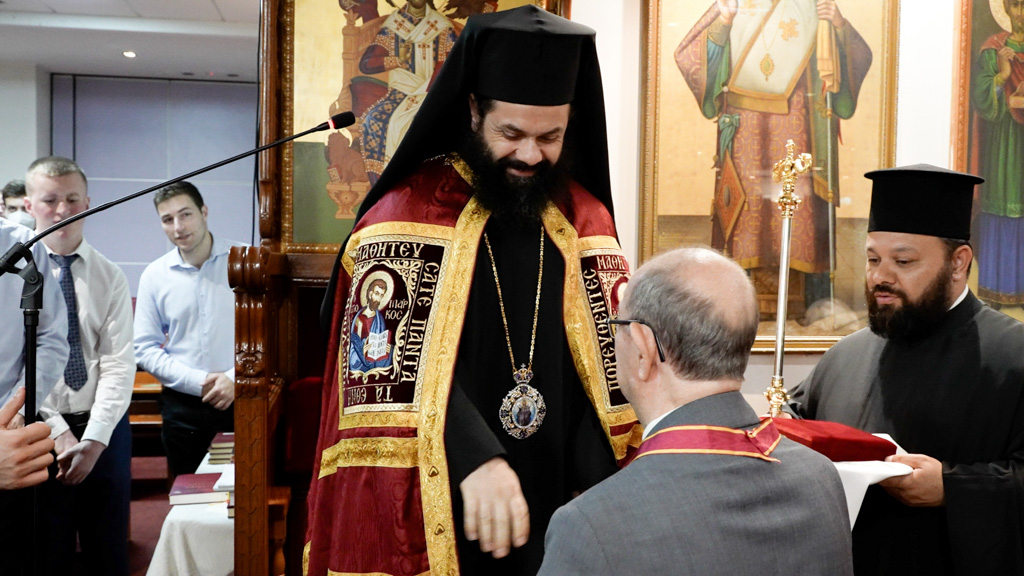 Cutting of New Year’s vasilopita in Archdiocesan District of Northcote

Competition of Expression and Creation: Greece, a country of light, faith and culture

Archbishop of Australia to new presbyter: Priesthood is a path full of thorns and trials

Archbishop of Australia: I will be vaccinated, even in public

Metropolitan of Bessarabia:The year that begins is our special year

Bishop of Mozambique: Holy Communion is not a cause of infection, but we must keep our distance inside the church

Speaking on ART TV, Bishop Chrysostomos of Mozambique about the measures against the pandemic in Mozambique in general and...

Ecumenical Patriarch Bartholomew presided over the Vespers service at the Patriarchal Cathedral of St. George in the Phanar on...

Bishop Elpidios of Kyanes visited the Holy Monastery of Pantanassa in Mangrove Mountain, NSW, together with Fr. Stavros Ivanos,...

The Church commemorates the veneration of the honorable chains, by which Saint Peter the Apostle was held secure. We...

Metropolitan Cleopas of Sweden made a heart-warming post on Facebook for his participation in the Holy Synod of the...

Under the auspices of the Archdiocese of Australia and in collaboration with the Melbourne Office of Education and the...