On Saturday, May 21, 2022, the Funeral Service of Marie-Thérèse Peckstadt-Janssens, widow of the late Protopresbyter Ignace Peckstadt and mother of the Metropolitan of Belgium and Exarch of the Netherlands and Luxembourg, Mr. Athenagoras, was held in the city of Ghent, Belgium. Marie-Thérèse, better known as Mita, passed away to the Lord on Monday, May 16, 2022, full of days, at the age of 94.

The funeral service was celebrated by her son, Metropolitan Athenagoras of Belgium, assisted by Bishop Dositheos (Patriarchate of Georgia) and twelve priests and deacons, including Fathers Bernard Peckstadt and Dominique Verbeke, son and son-in-law of the deceased.

The Ecumenical Patriarch Bartholomew was represented by Apollonius Joachim, Auxiliary Bishop of the Metropolitan of Belgium. Among the many clerics who attended the Service, the Archbishop Mr. George Kourie of the Syrian Church, as well as the Reverend Elders Mr. Frans Mistiaen, Mr. Hildebrand Vandermaelen, (Roman Catholic Church) and Fr. Agapius of the Coptic Church, were prominent. The Evangelical Church of Belgium was represented by Dr. Geert Lorein, leader of the Evangelical Church in Belgium. In attendance were also Elder Joanna accompanied by a nun from the Convent of the Nativity of the Virgin Mary in Asten (Netherlands).

In his speech, Metropolitan Athenagoras stressed about his everlasting parents: “They complemented each other. Our mother followed our father in all his decisions, but our father could not make decisions without our mother. They were always together. For each other, but together for the neighbor. The same was true in our father’s law firm; and in ministry in the Orthodox Church. This has been even more so since they founded together the Orthodox parish in Ghent, 50 years ago. With our father’s ordination, Mita became the ” elder mother ” and in a sense the mother of all the parishioners. She was the tireless ear for those who wanted to share their personal story with someone. Many trusted her and she guided each problem to the right solution. Our mother lived in perfect harmony with her beloved husband Ignatius. To her children she was a sweet and loving mother, grandmother and great-grandmother. (…) How many people from the most diverse countries on the planet have not tasted and appreciated her hospitality? Older and younger ones like in a novel. All were hosted with cordiality and honour. And let us not forget the countless and adventurous family trips as the completion and highlight of the year.”

After the speech of Metropolitan Athenagoras, Bishop Joachim, delegate of the Ecumenical Patriarch Bartholomew, took the floor. The Ecumenical Patriarch also sent a message to Metropolitan Athenagoras in which he said the following: “We recall with emotion that unforgotten woman by the side of the venerable Fr. Ignatius Peckstadt during their visits here and not only, who, as a pair offered the holy clergy of the Holy Church their own shoots willingly and conscientiously. The virtue, kindness and charitable character of your blessed parents will remain engraved in our memory and heart”.

The speech was then given to the two grandchildren, Justine and Nicolas, children of Fr. Bernard Peckstadt, and the song “Alleluia” by Leonard Cohen, sung by the singer Eefje de Visser, wife of Pieterjan Coppejans, grandson of the deceased.

Among the large crowd, the Ambassador of Greece, Mr. Dionysios Kalamvrezos, the Consul General of Greece, Mr. Vasilios Zarbalis, His Excellency Sir Mr. Konstantinos Vamvakas and his wife, and Mr. Philip Kotsaridis, President of the Greek Community of Brussels, were present.

Marie-Thérèse’s body was interred in the family grave in the Langerbrugge Cemetery, near Ghent, where she is now resting with her late husband, Protopresbyter Ignation Peckstadt. 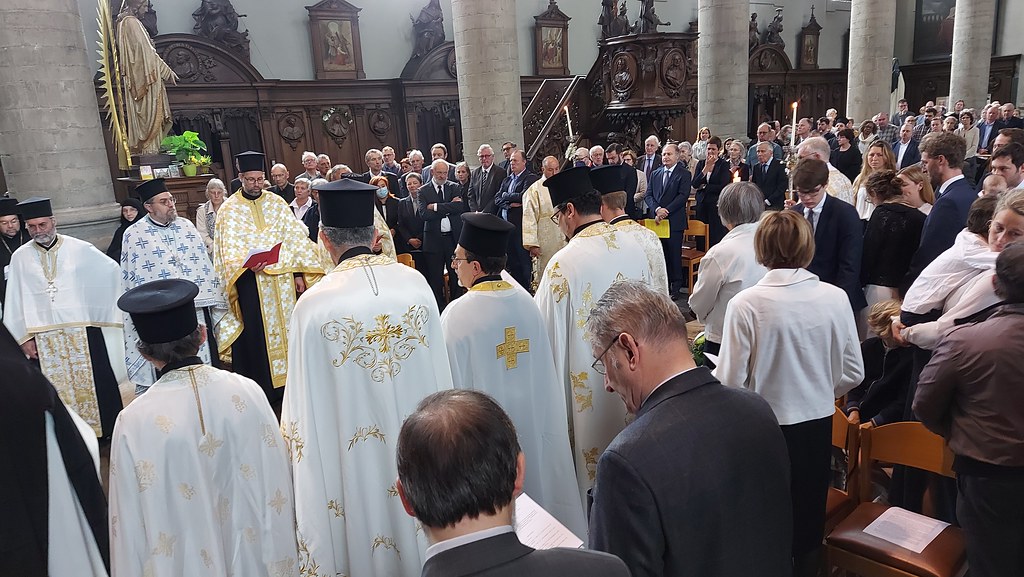 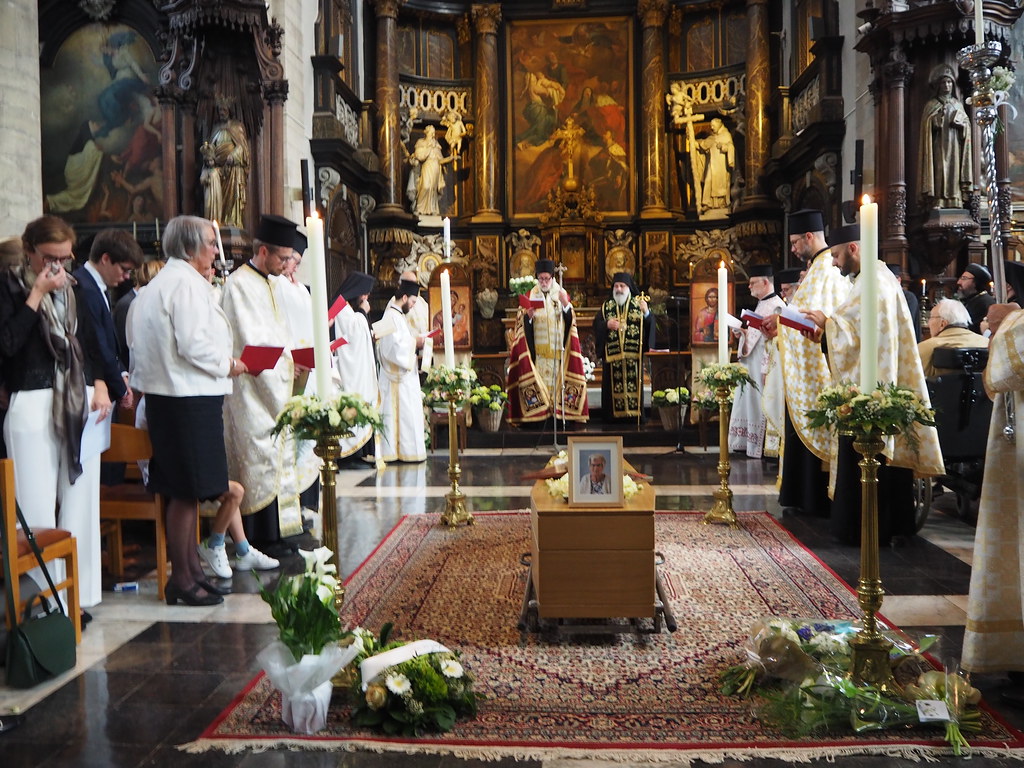 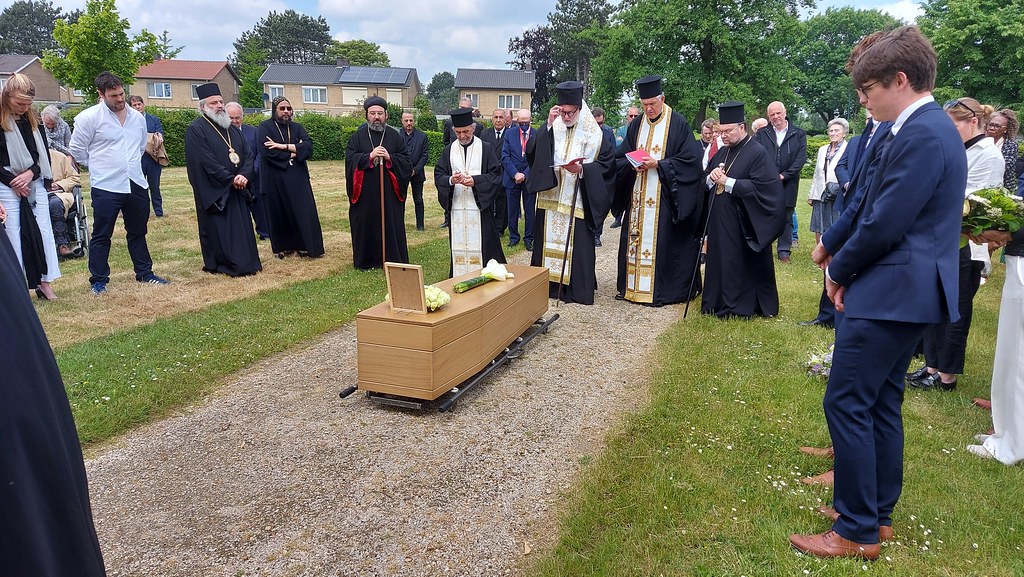 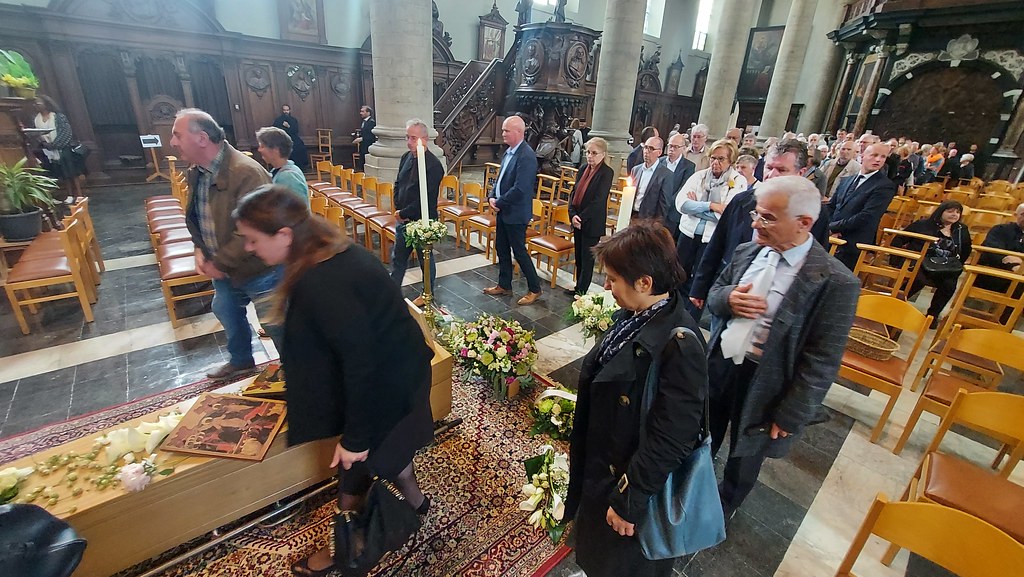 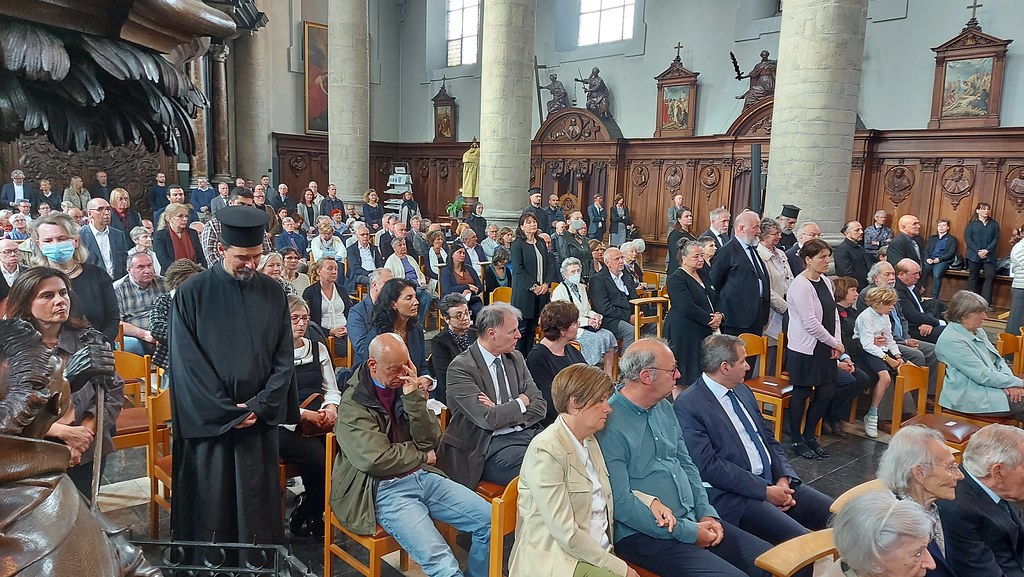 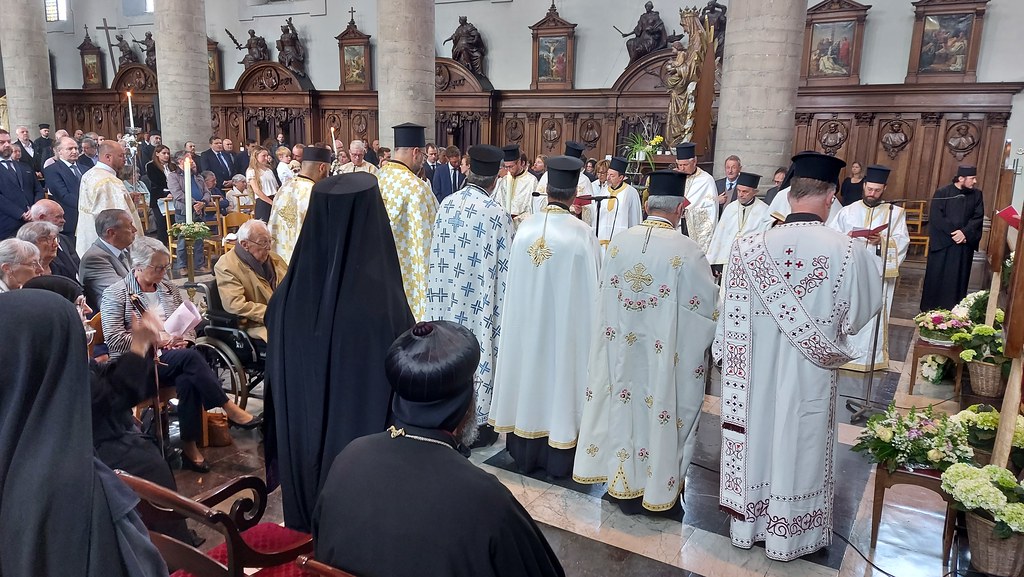 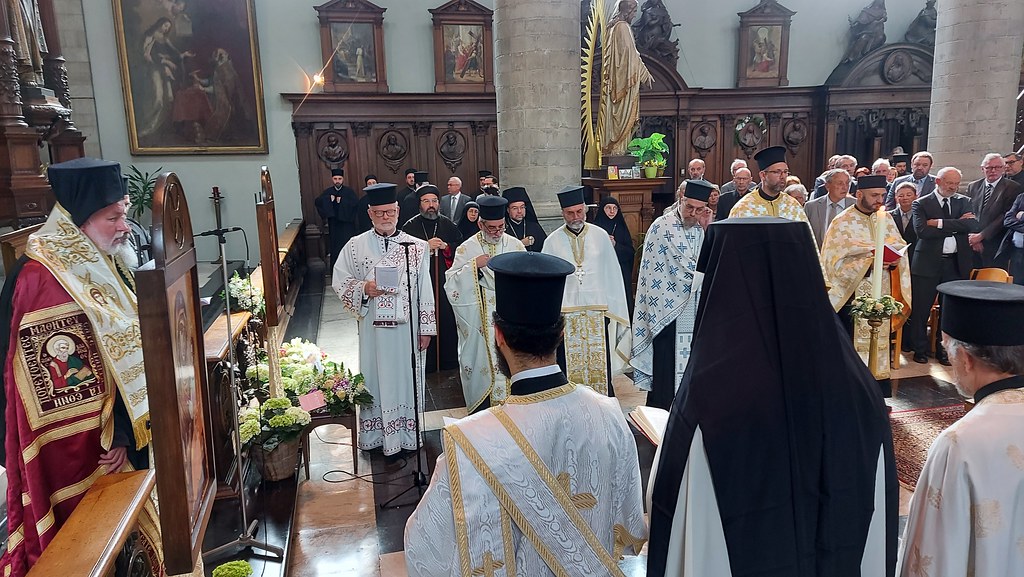 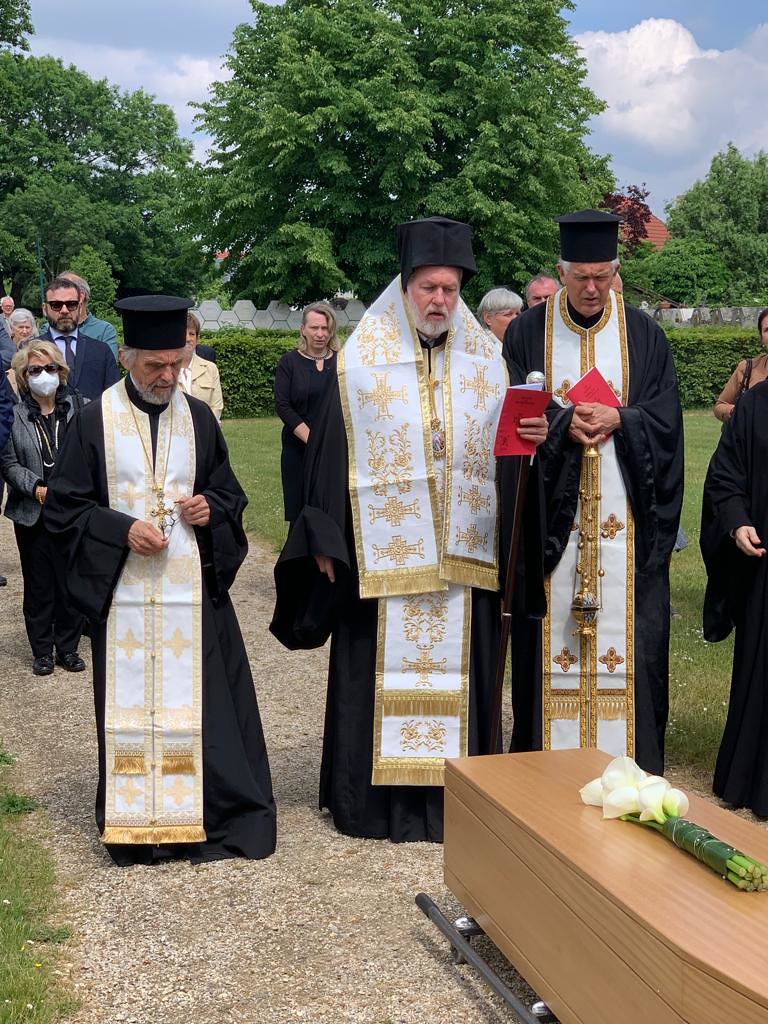 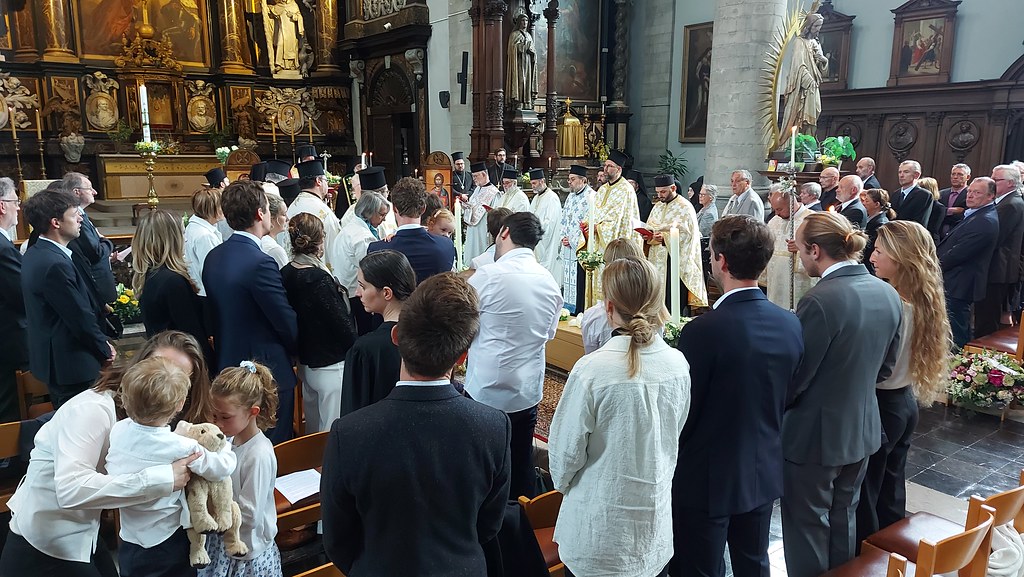 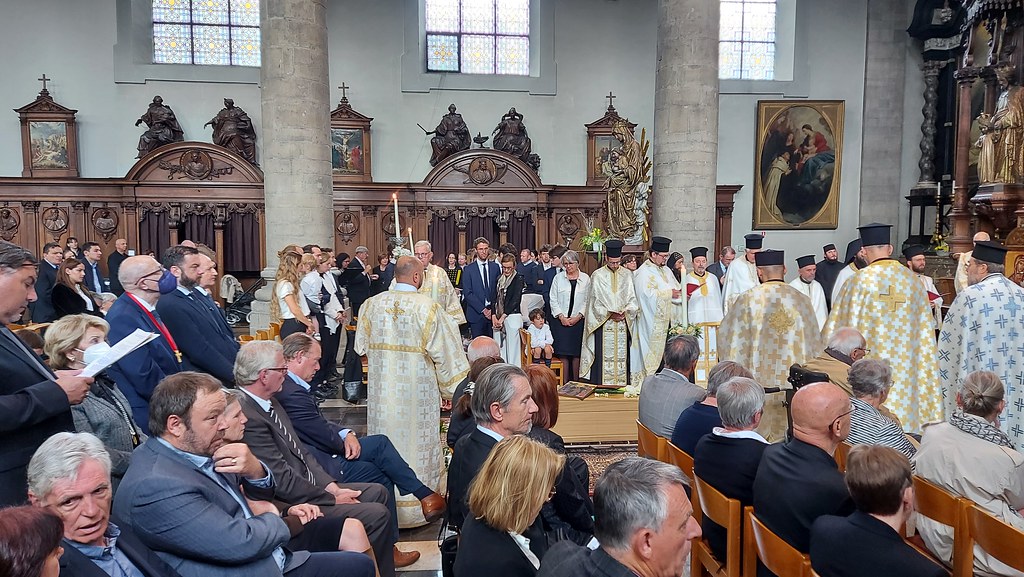 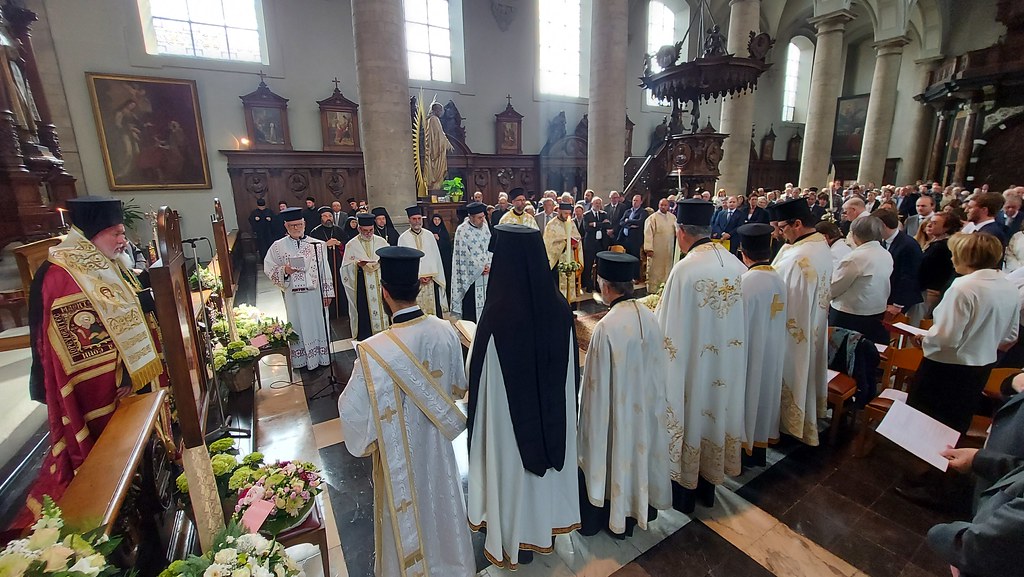 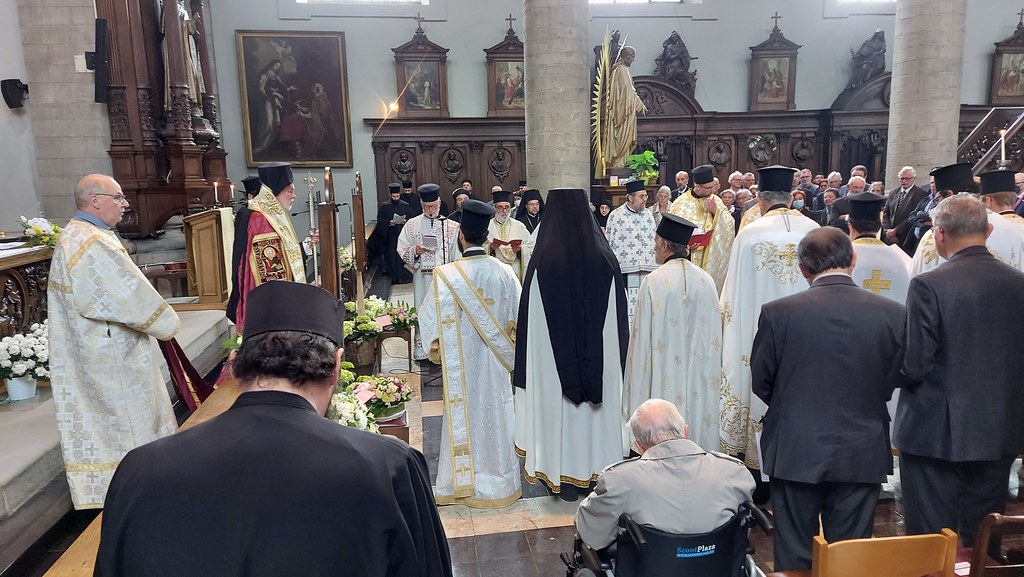 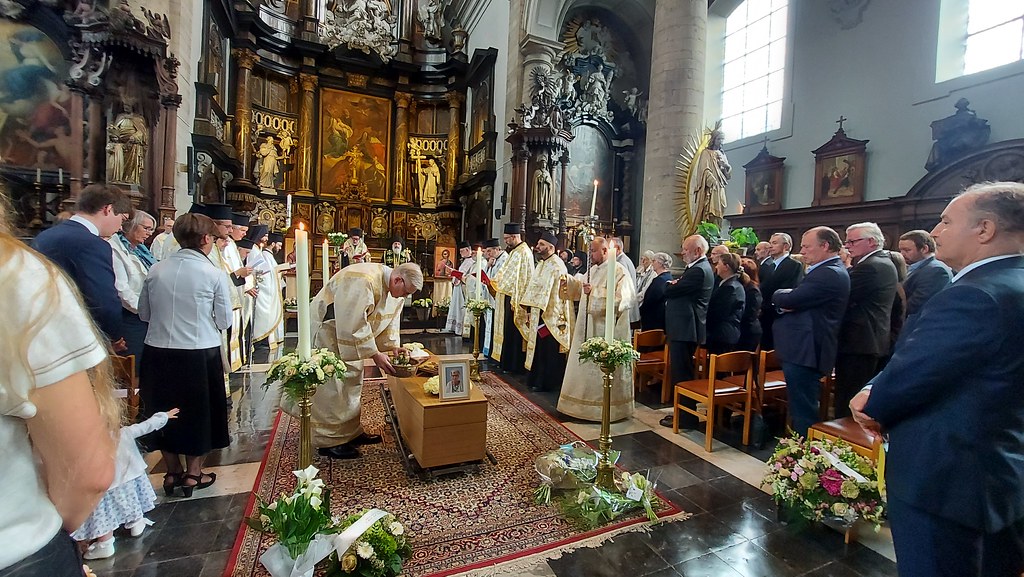 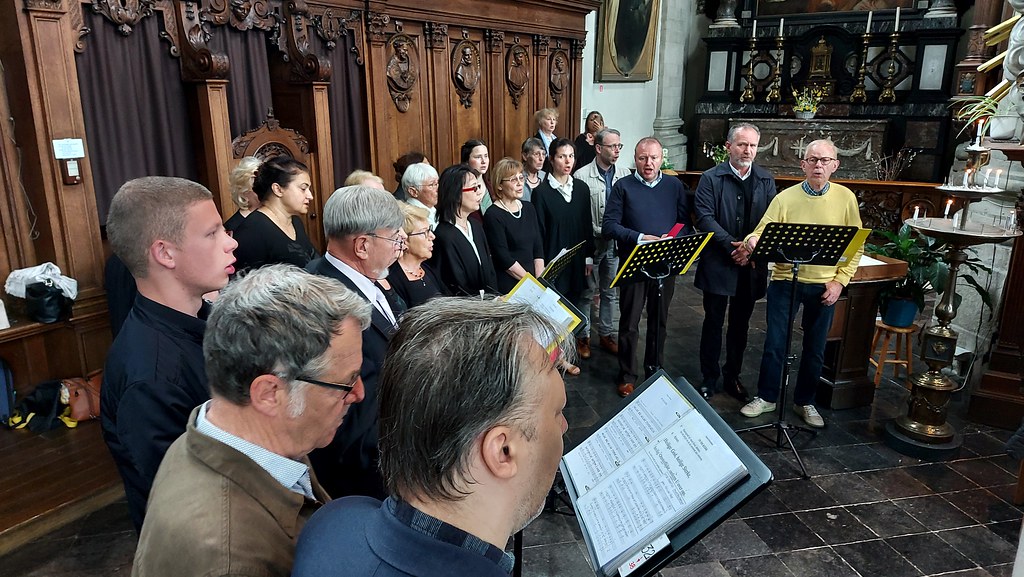 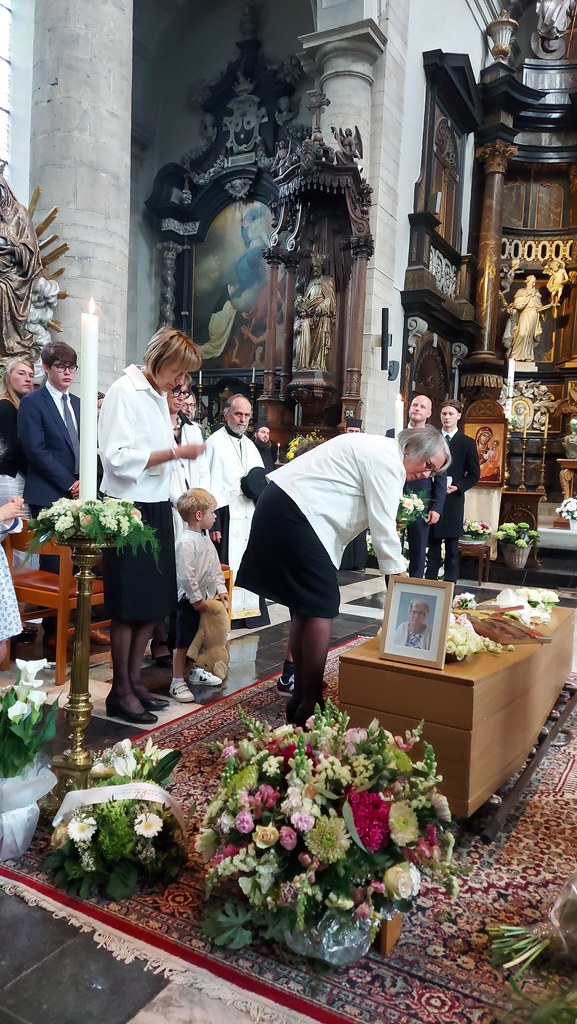 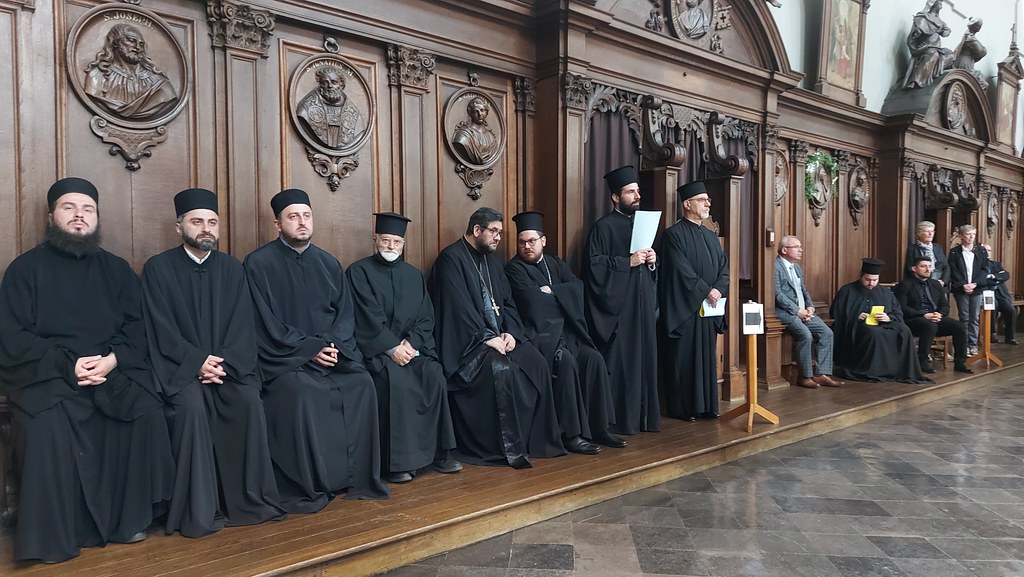 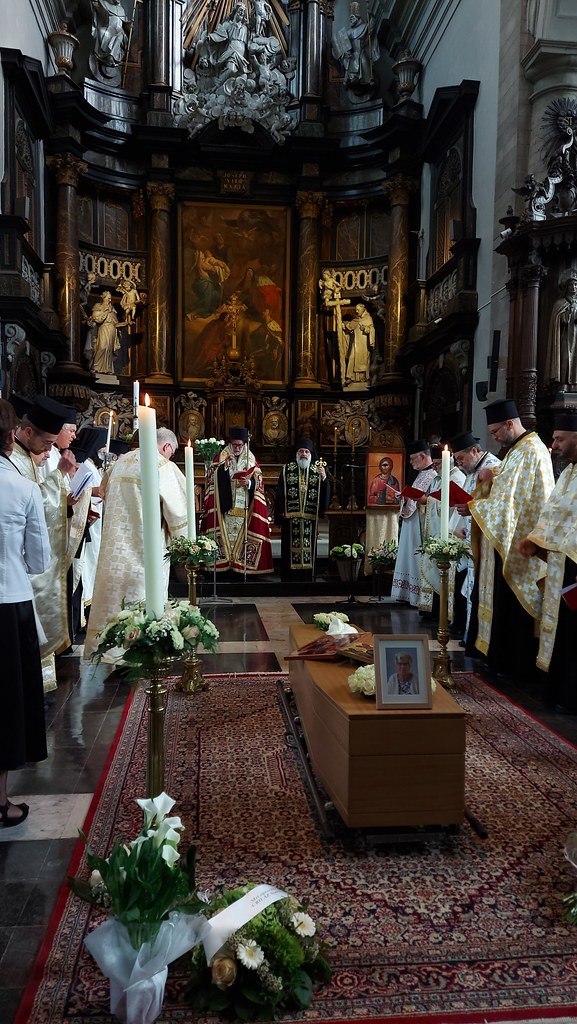 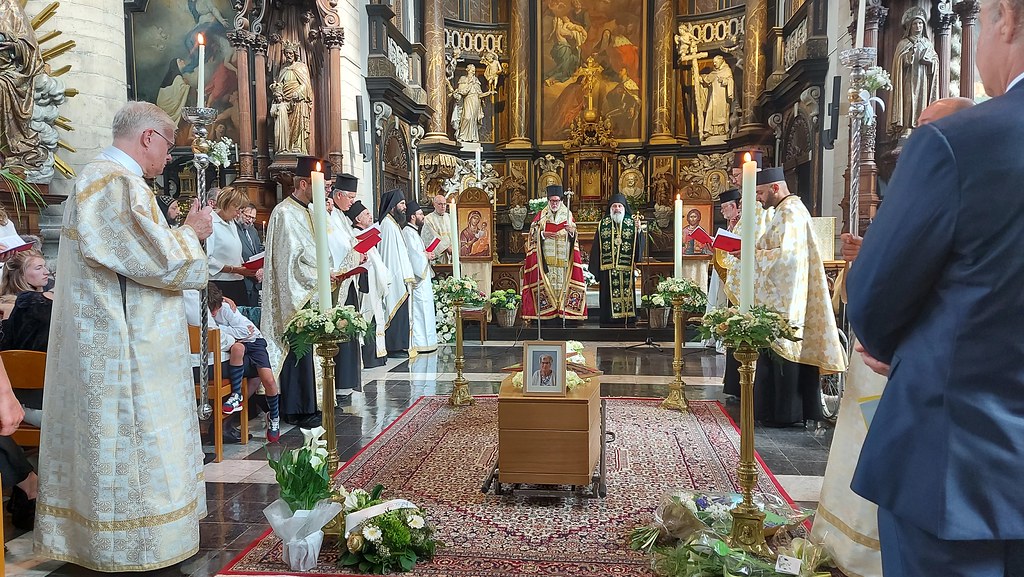 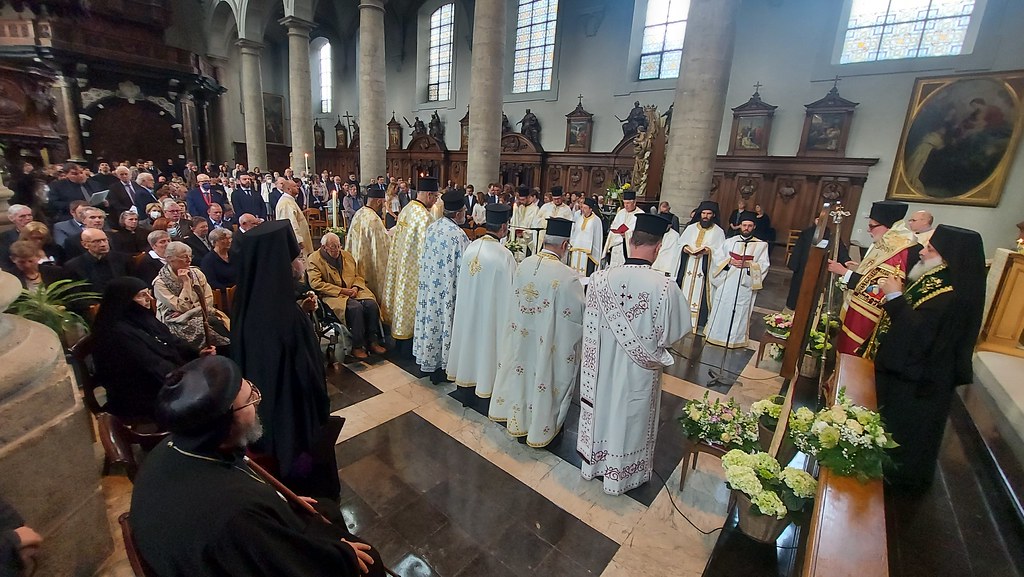 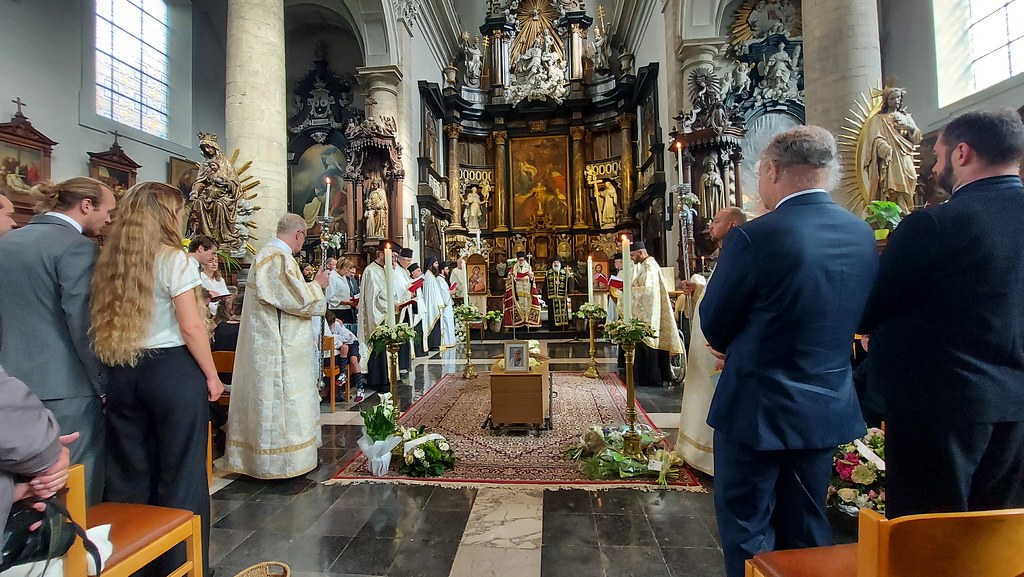 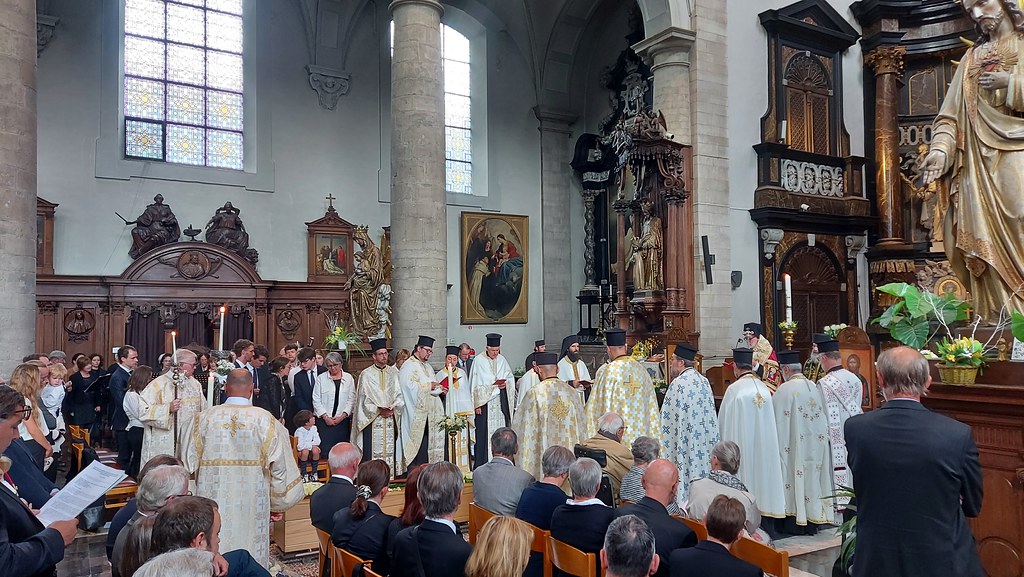 US Ambassador to Archbishop Ieronymos: Great respect for what you have done for the country