On Tuesday, January 24, 2023, the Patriarchate of Jerusalem celebrated the feast of our Holy Father Theodosius the Cenobiarch in the Holy Monastery, located in the area between the Village of the Shepherds and the Holy Lavra of Saint Savva the sanctified and the adjacent so-called village of Abediye.

On this day, the Church remembers that Saint Theodosius came from Mogarissa in Cappadocia, he came to the Holy Land in the year 451, when he was 27 years old, he joined the Order of the Studious of the Church of the Holy Sepulchre. Then he lived as a monk in the Monastery formerly called “Seat of Ikelia” near Jerusalem and in the area where the cave was, where the Magi spent the night “returning by another way to their homeland” (Matthew 2:12).

In this area he founded the Coenobitic Monastery for the training of novice monks, trained in common life, obedience and humility, without being deemed suitable for entering the Monastery – Lavra for an ascetic life. Due to his extreme virtue, he was appointed Cenobiarch, i.e. Leader of the entire Coenobitic life in Palestine and he cooperated after his compatriot Saint Savva for the protection of the doctrine of the Fourth Ecumenical Council of Chalcedon in the year 451 AD. That is, that Christ our God, has one hypostasis in two natures, the divine and the human.

In his Holy Monastery, he received monks of various nationalities. The monks worked as manual labourers and from this income maintained charitable institutions such as a nursing home and an orphanage. Due to the Monastery’s location near the Shepherds Village village, it maintained a coenobitic character for the help of the needy asking for help. The Monastery had four churches and about seven hundred monks.

In this famous Monastery, the centre of monastic life and doctrinal correctness of the 5th and 6th centuries, a Divine Liturgy was held in honour of its founder, Saint Theodosius, during a vigil on the night of January 11/24, 2023, officiated by Patriarch Theophilos of Jerusalem, with the co-celebration of the Archbishops Aristarchos of Constantina and Theodosios of Sebasteia, Hagiotaphite Hieromonks, among whom the Dragoman Archimandrite Mattheos, Archdeacon Mark and Hierodeacon Eulogios. The chanting was delivered by Hierodeacon Simeon and Gotsopoulos and by a choir made up of members of the flock from the neighbouring areas, with the participation of monks, nuns and pilgrims.

Before the Holy Communion the Patriarch of Jerusalem delivered the following Sermon:

“Thou didst secretly enter into the noetic darkness of the Divine Light, O all-blessed Theodosius; and having the doctrines of piety written on the tablets of thy heart by the finger of God, thou gavest them to thy disciples as a book of life” (Minaion, Ode 8, Troparion 4).

Christ, the Son and Word of God, who was baptized in the Jordan, and who renewed and regenerated the aged man by sin, brought us all together in this Holy Monastery of Abba Theodosius the Cenobiarch, to celebrate his venerable memory.

Our holy Father Theodosius, who loved Christ from a young age, left his native country, the town of Mogarrisa in Cappadocia, and retreated to the Holy Land, where he lived the monastic life, during the reign of Markianus.

According to his biographer, Cyril Scythopolitis, our holy Father Theodosius was shown to be a citizen of heaven, the great beauty of Palestine and the boast of the desert, and the General and support of the monastic figure and the right doctrines and defender, guide and protector of the Coenobitic Canon.

It is noteworthy that the God-bearing Theodosius became not only “the support of the monastic schema”, but also the general and champion of the correct doctrines. And this because when he entered the holy city of Jerusalem and was lodged in the Tower of David, by the elder Longinus of Cappadocia, of the monastic order, “of the Studious of the Holy Resurrection of our God Christ”, namely of the Hagiotaphite Brotherhood, he was not allowed to departure to the monasteries of the desert of Palestine, “due to the schism of the monks in the desert who did not partake of the Catholic Church, but were subject to the strife and ill-will” of Eutychus and Dioscorus

In other words, the Church of Jerusalem and the monasticism in the desert, a numerous place of anchorites, was tested by the malice, the heresy of monophysitism, monoenergeticism and Monothelitism. Our holy Father Theodosius was “a general and champion of the Orthodox doctrines, that is, of the Orthodox teaching and faith, as his hymnographer also eloquently states: “Calling thy teaching to remembrance, O Theodosius, we proclaim Christ in two essences, acknowledging the two natural wills and energies and authorities in God who was baptized in the flesh” (Matins, Ode 9, Troparion 3).

The dedication of the God-bearer Theodosius to the healthy Orthodox faith made him a Temple of the Holy Spirit. Clothed with power from on high according to the proclamation of our Lord Jesus Christ to His disciples: “And, behold, I send the promise of my Father upon you: but tarry ye in the city of Jerusalem, until ye be endued with power from on high”, (Luke 24,49), he worked many miracles.

It is said of him, Saint Theodosius, as his biographer mentions, that he did three outstandingly meritorious deeds, firstly, the most exacting exercise of true and orthodox faith from youth to old age, secondly, his kindness to strangers and the poor, and his impersonal philanthropy, the third and the unceasing celebration of the Divine Liturgy.

This is why the hymnographer exclaims, saying: “Thou didst secretly enter into the noetic darkness of the Divine Light, O all-blessed Theodosius; and having the doctrines of piety written on the tablets of thy heart by the finger of God, thou gavest them to thy disciples as a book of life” (Minaion, Ode 8, Troparion 4).

In other words, the blessed Theodosius, like another Moses, entered the place where God was (Exodus 20,21). According to Saint Dionysios of Areopagite, this divine “gnophos” (noetic darkness) is the unattainable light”. According to Saint John the Theologian: “God is light, and in Him, there is no darkness” (1 John 1, 5). And according to Saint Gregory of Nyssa, the “slates written by the finger of God” are the voice of God. “The letters in the slates, the voice of God.” Through whom the revelation of the mysteries took place.” According to the celestial Paul, the Lord God is ” Who only hath immortality, dwelling in the light which no man can approach unto; whom no man hath seen, nor can see” (1 Tim. 6,16).

From the above, it is demonstrated, my beloved brothers, that the faithful and genuine members of the Church, of the Body of Christ, belong to the communion of saints. ” God is faithful, by whom ye were called unto the fellowship of his Son Jesus Christ our Lord”, (1 Cor. 1,9) preaches Saint Paul, who prays for us, ” That the God of our Lord Jesus Christ, the Father of glory, may give unto you the spirit of wisdom and revelation in the knowledge of him: The eyes of your understanding being enlightened; that ye may know what is the hope of his calling, and what the riches of the glory of his inheritance in the saints” (Eph. 1, 17-18).

This wealth of the glory of God was inherited by our holy Father Theodosius, who is being honoured today. This wealth, says Saint Chrysostom, is “the ineffable glory of God”, so he wonders: “what word is able to describe that glory?” [of God]?”

This wealth of God’s glory is provided by Christ as an inheritance in His Church and through His saints, as the psalmist says: “God is wonderful in His saints” (Psalm 67:36).

We beseech God’s Saint Theodosius the Great, my beloved brothers, to be ambassador, after the blessed Theotokos and Ever-Virgin Mary, to the noetic Sun of Righteousness, who came to Jordan to be baptized by John, to enlighten us and the whole world. Amen. Many happy returns”.

After the Divine Liturgy, the renovator of the Monastery, elderly Archimandrite Hierotheos, offered a treat to the Patriarchal entourage. 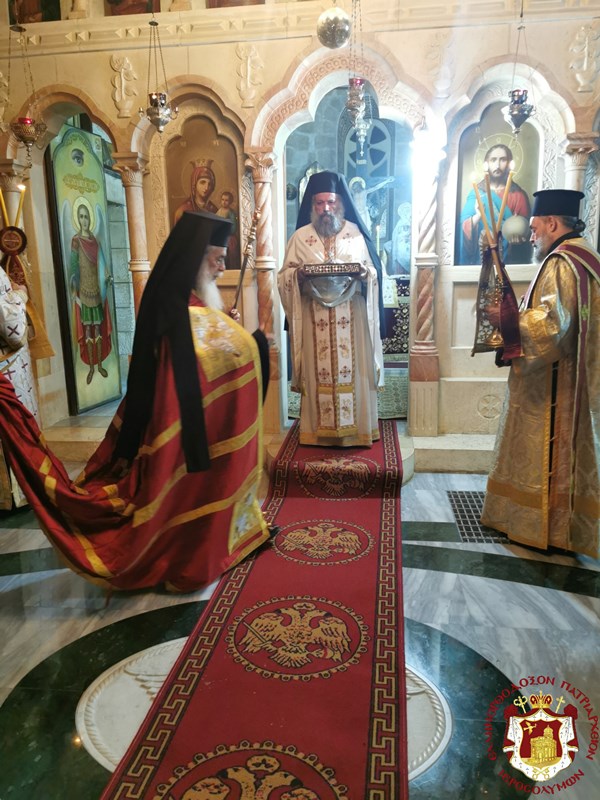 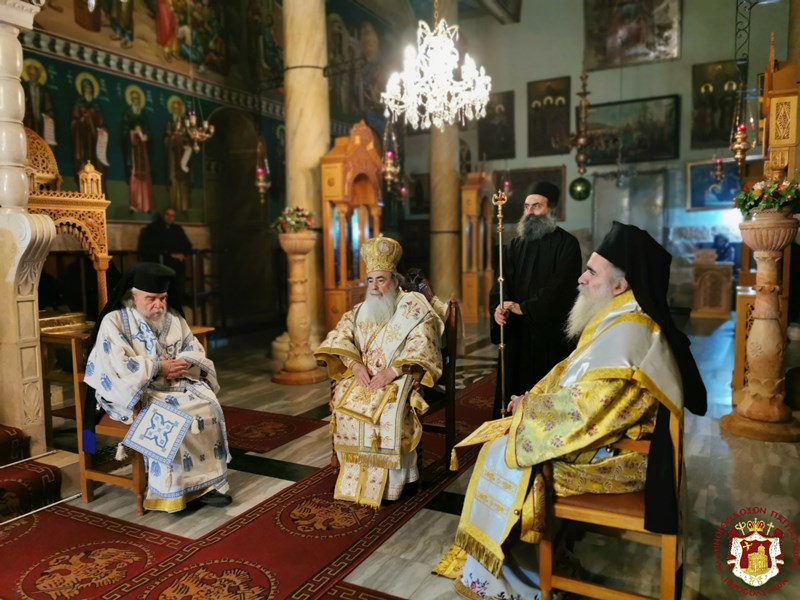 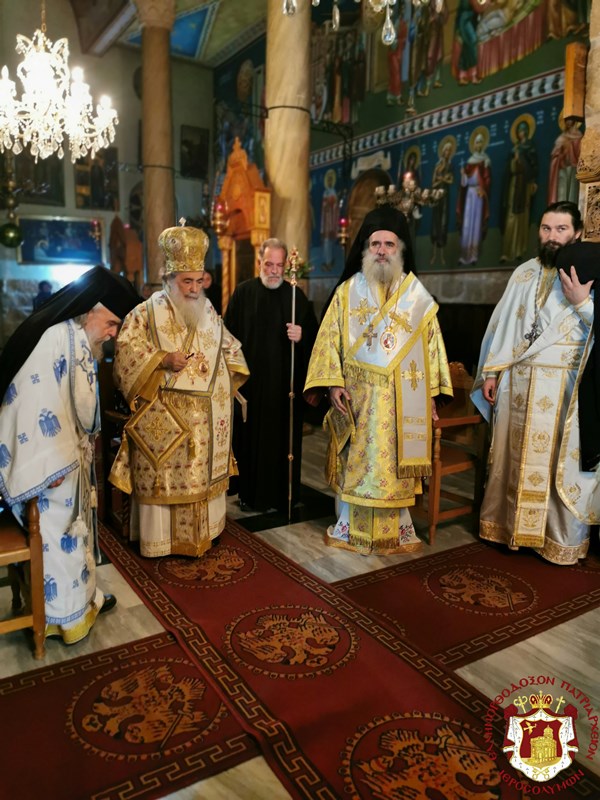 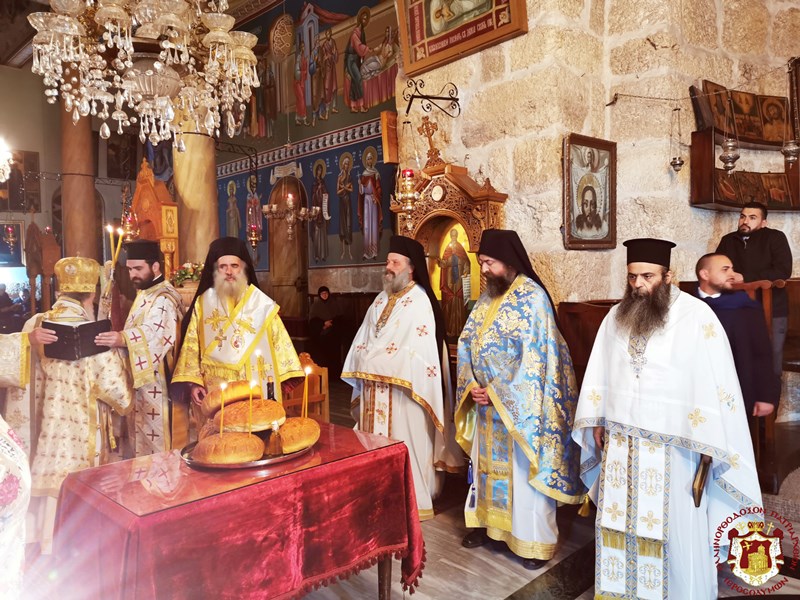 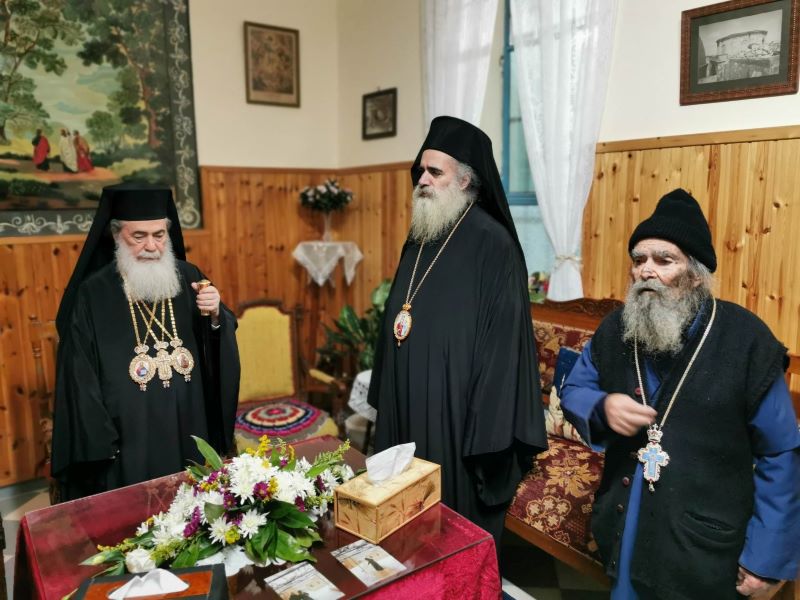