Mourning and sadness for Patriarch Irinej of Serbia (VIDEO, PHOTOS)

The funeral service of the late Patriarch of Serbia, Irinej, who reposed in the Lord due to COVID-19-related complications, took place at the Church of Saint Sava.

The Divine Liturgy was celebrated in the memory church of St. Sava in Belgrade in Belgrade while the body of Patriarch Irinej was laid in the centre of the large church.

Metropolitan Hrisostom of Dabro-Bosnia presided over the Liturgy with the concelebration of Metropolitans of Volokolamsk Hilarion from the Moscow Patriarchate and Antony of Borispol and Brovary from the Ukrainian Orthodox Church of the Moscow Patriarchate; Archbishop of Ohrid and Metropolitan Jovan of Skopje;  Metropolitan Porfirije of Zagreb-Ljubljana; Bishops: Jovan of Sumadija, Irinej of Backa, Pahomije of Vranje, Teodosije of Raska-Prizren, David of Krusevac, Ilarion of Timok, Arsenij of Nis, Dimitrije of Zaholm-Herzegovina, Anthony of Moravica, Isihije of Mohács, Methodije of Diocleia, the clergy of the Serbian Orthodox Church and guests from other local Orthodox Churches, in the prayerful presence of Bishop Gregory of Düsseldorf and Germany, Stephen of Remesiana and Bishop emeritus Atnasije of Zaholm-Herzegovinia.

During the Holy Liturgy, Irinej, Bishop of Backa, delivered the sermon.

The funeral Liturgy, Funeral Rite and Burial were attended by the President of the Republic of Serbia Aleksandar Vucic, Serbian Member of the Presidency of Bosnia and Herzegovina Milorad Dodik, President of the National Assembly of the Republic of Serbia Ivica Dacic, Prime Minister of the Serbian Government Ana Brnabic, Deputy Prime Minister and Minister of Defense Nebojsa Stefanovic, Minister of Foreign Affairs Nikola Selakovis, Minister of the Interior Aleksandar Vulin and other members of the Government of the Republic of Serbia, Chief of the General Staff of the Serbian Army General Milan Mojsilovic, Prime Minister-designate of Montenegro Zdravko Krivokapic, leaders of the Democratic Front of Montenegro Andrija Mandic and Milan Knezevic, Director of the Directorate for Cooperation with Churches and Religious Communities Dr. Mileta Radojevic, members of the Crown Council, representatives of the highest cultural, scientific and public institutions, members of the diplomatic corps, Apostolic Nuncio in Belgrade Archbishop Suriano Luciano, Roman-Catholic Archbishop of Belgrade Stanislav Hocevar, representatives of traditional Churches and religious communities in Serbia.

Members of the Serbian Army and Police, together with their people, honored the late Serbian Patriarch Irinej in the most dignified manner, thus confirming their unity with the Serbian Orthodox Church and testifying that together they are centuries-old, lasting and strongest pillars of the Serbian state.

The Serbian Army guards carried the coffin with the body of the Patriarch of blessed memory and formed honorary lines both in front of the Cathedral and the Church of St. Sava.

A team of artists from the Russian Federation, headed by the prominent artist Nikolai Muhin, who for years under the watchful eye of the Patriarch performed works on the interior decoration of the church of St. Sava, honored the Serbian Patriarch by their presence.

The body of Patriarch Irinej was placed in a crypt inside the church that was built especially for the burial of Serbian hierarchs. Irinej is the first Patriarch to be buried in the crypt of the Church of Saint Sava.

A panichida was held yesterday morning at the Cathedral Church of Saint Michael the Archangel, in Belgrade with the participation of many hierarchs of the Serbian Orthodox Church and the presence of hundreds of faithful, inside and outside the church. 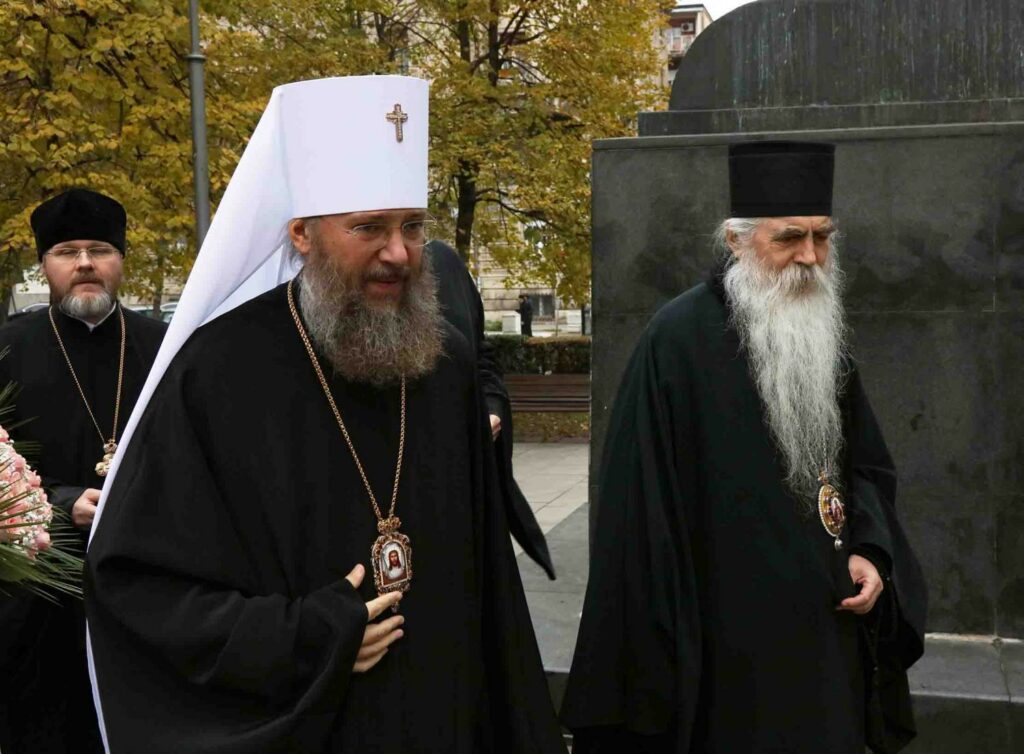 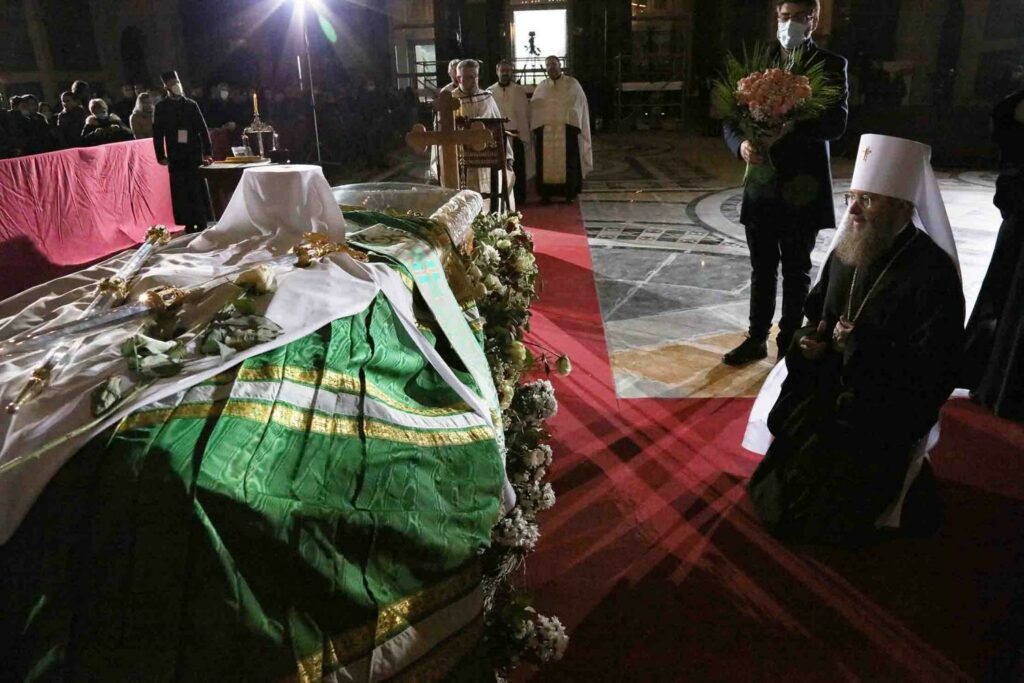 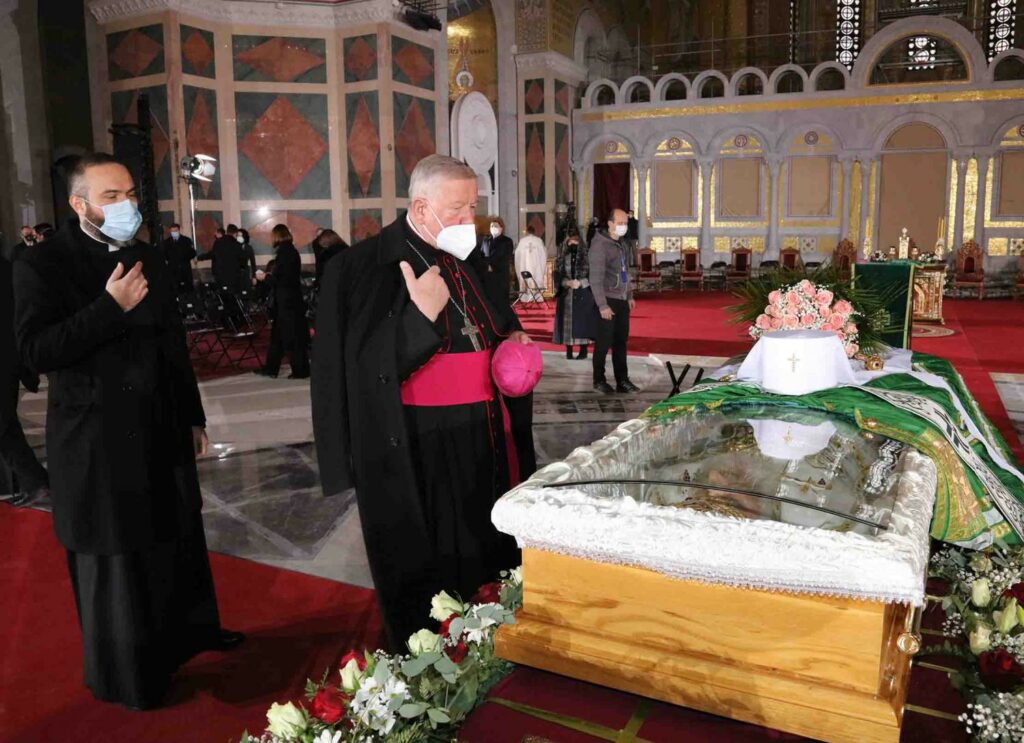 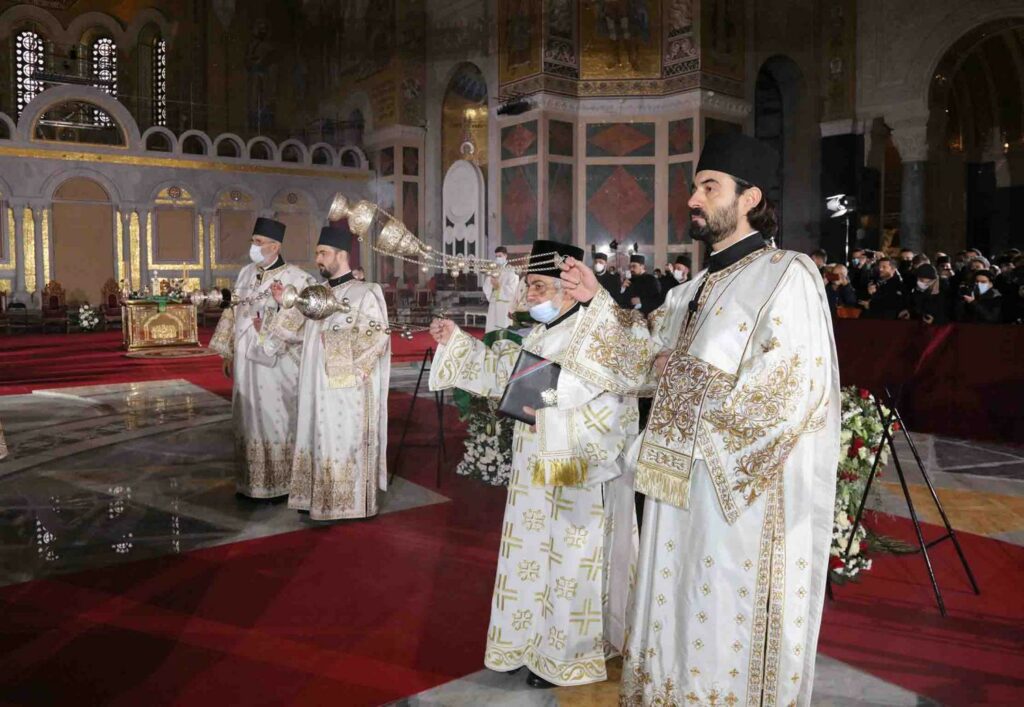 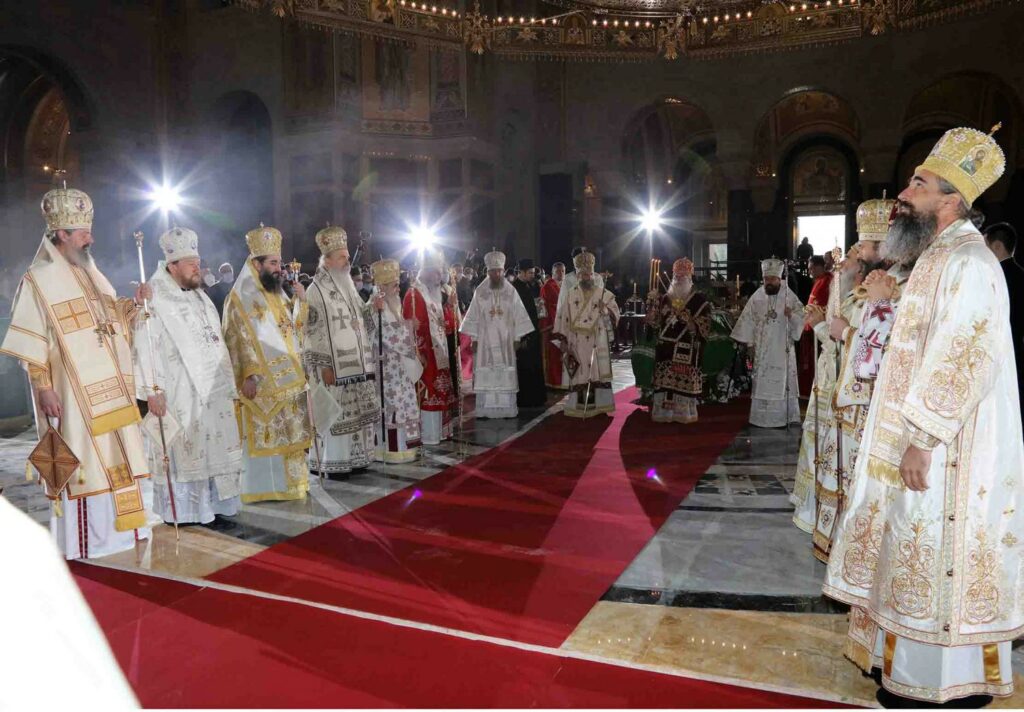 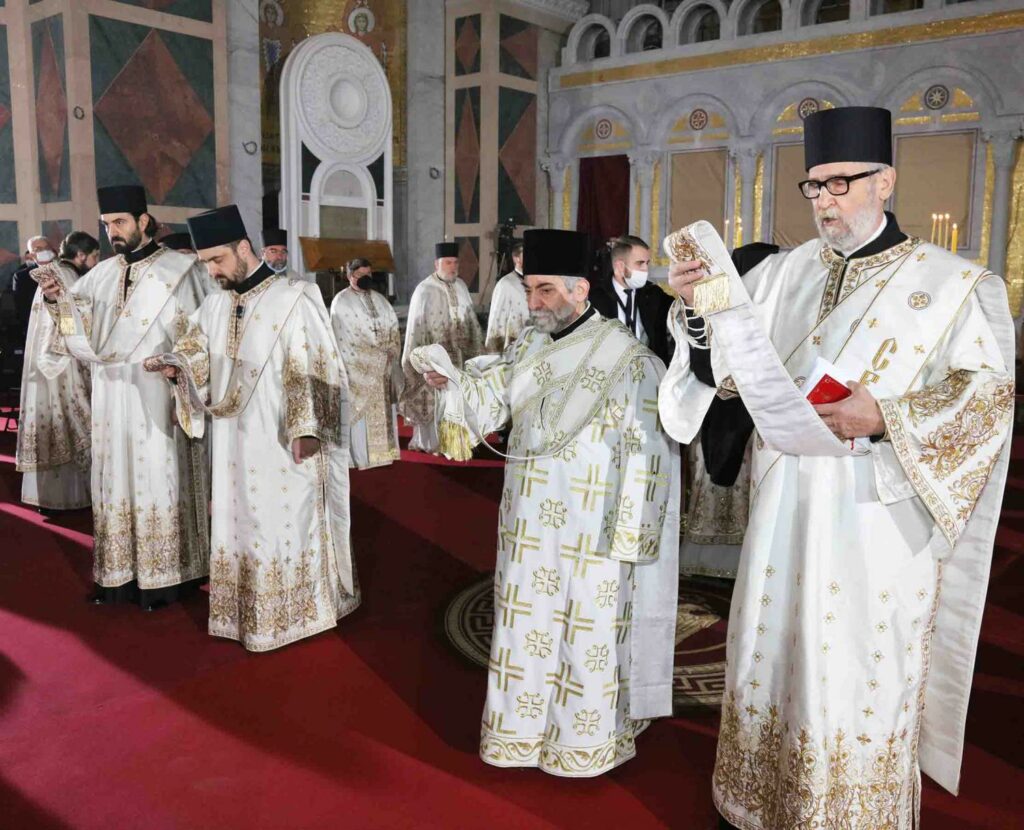 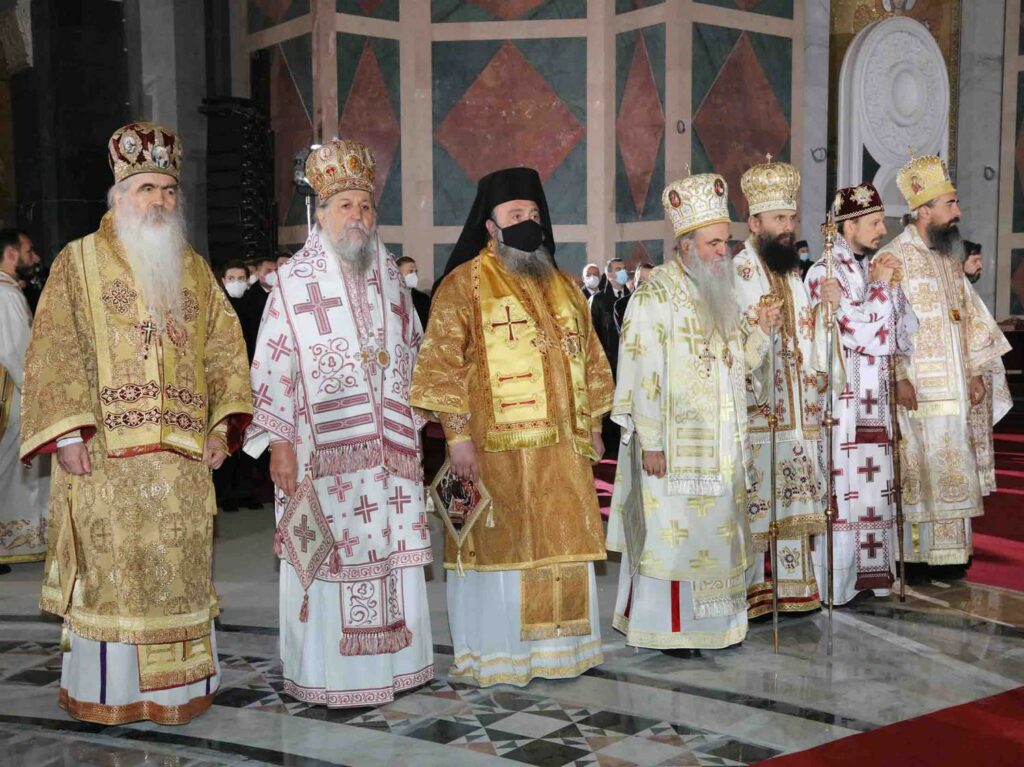 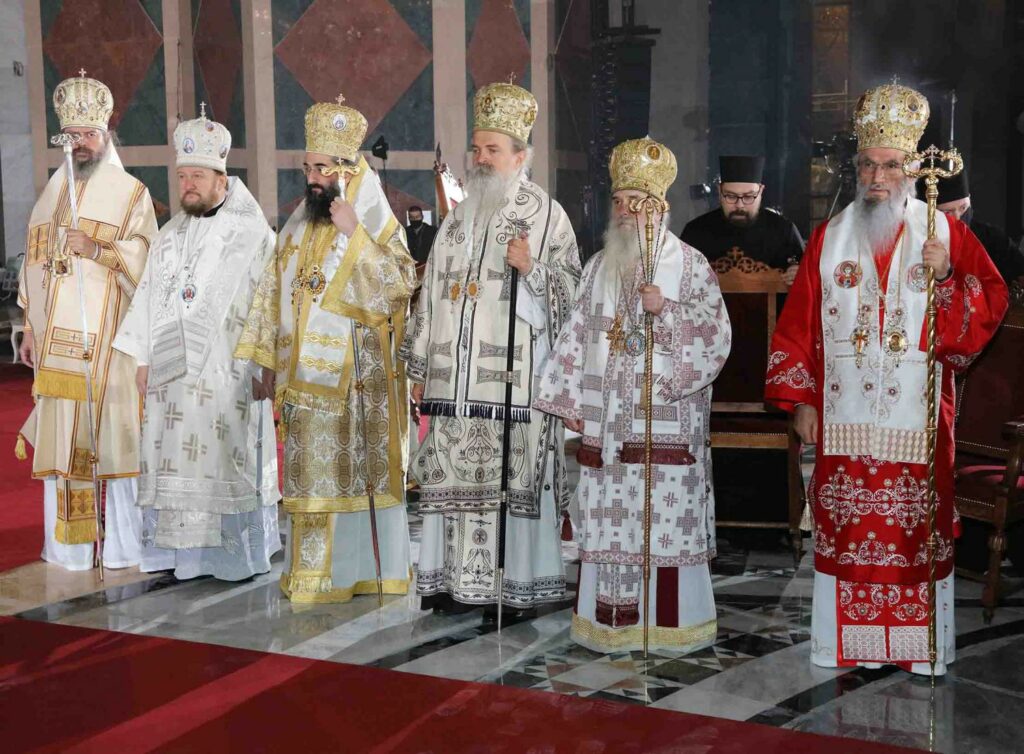 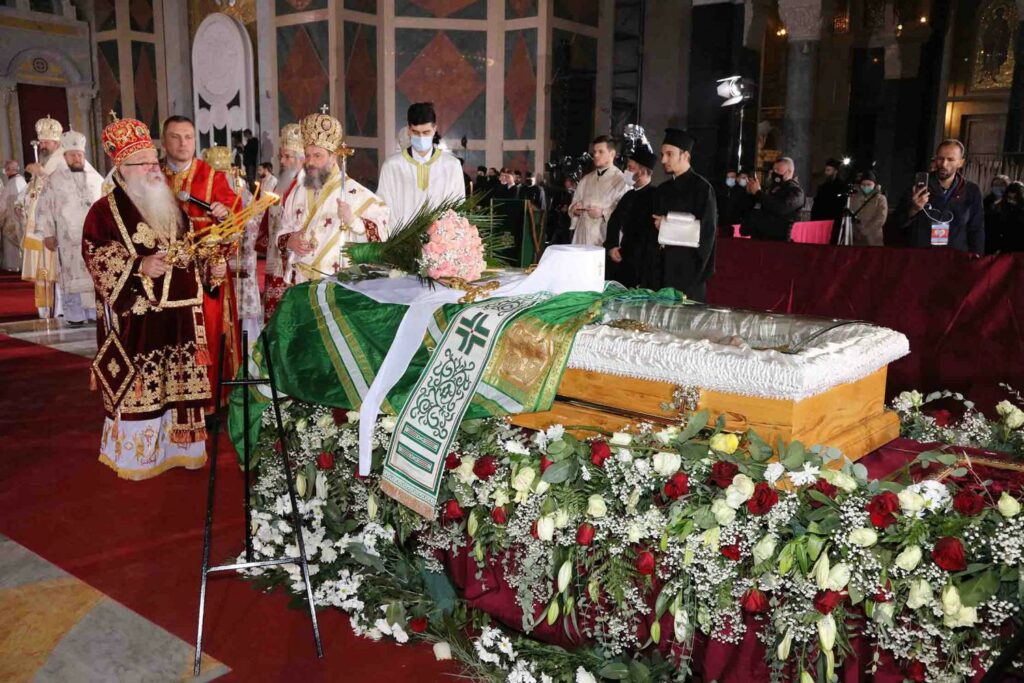 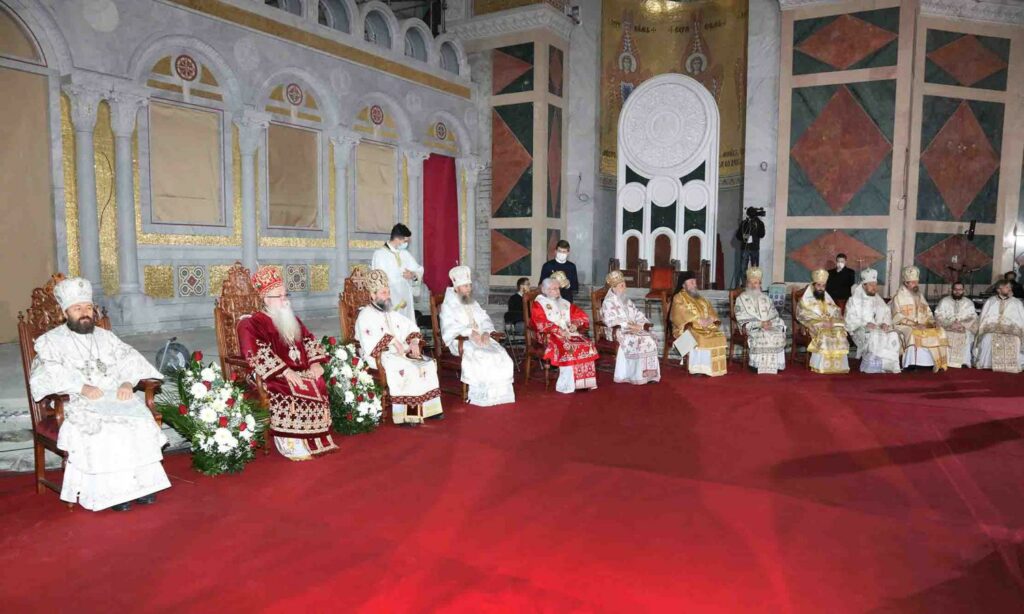 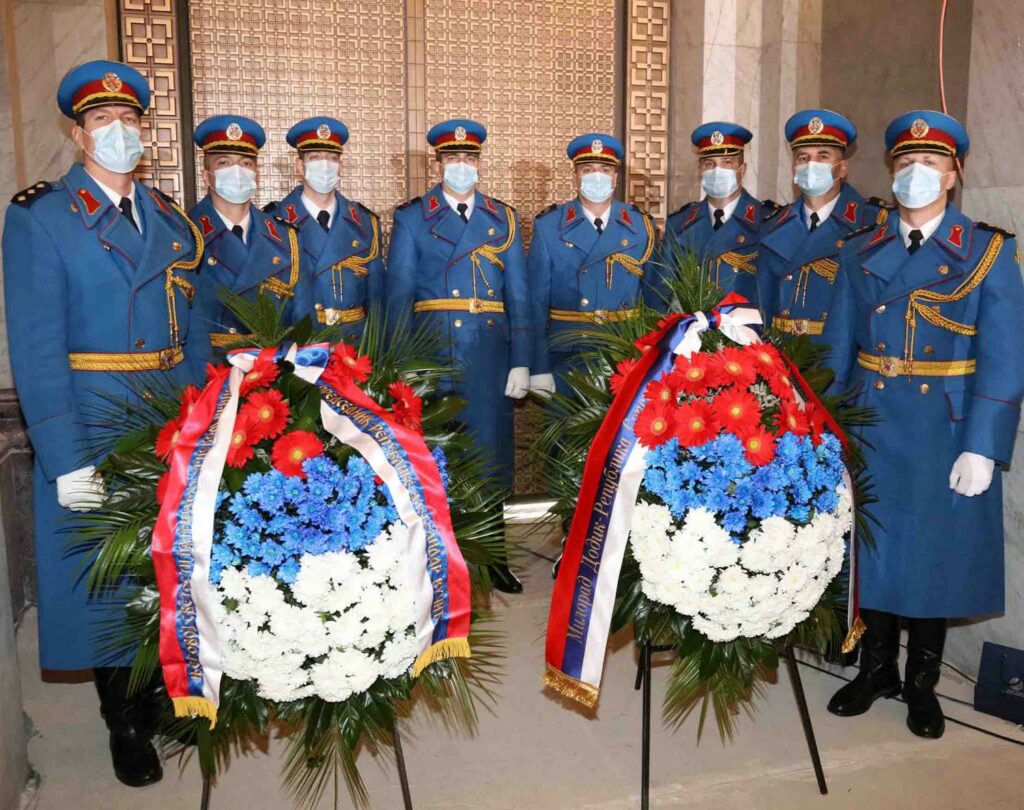 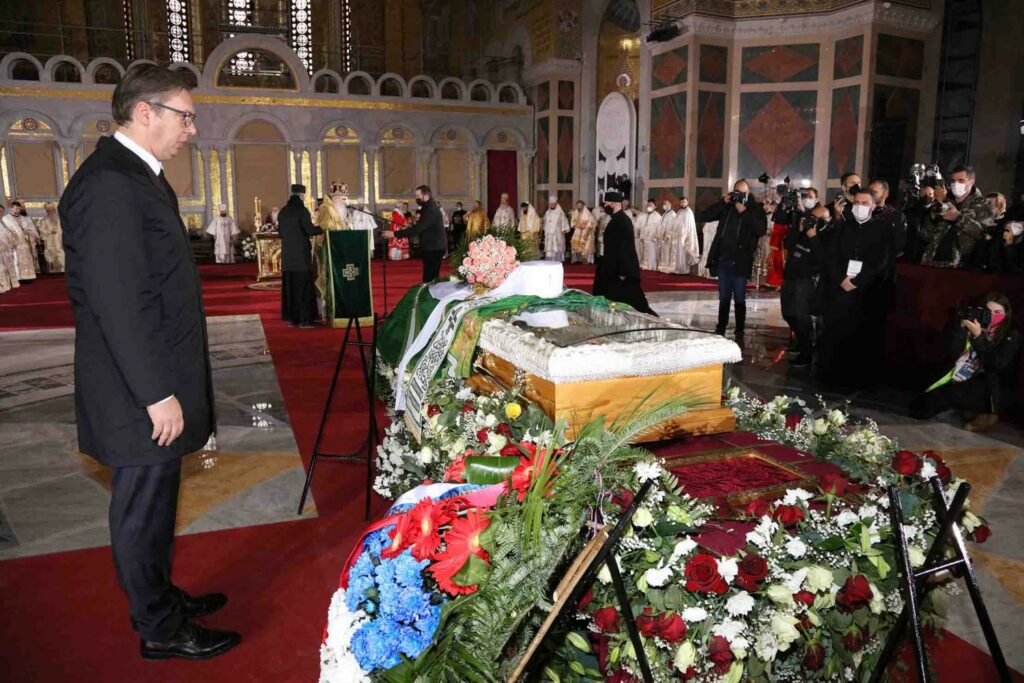 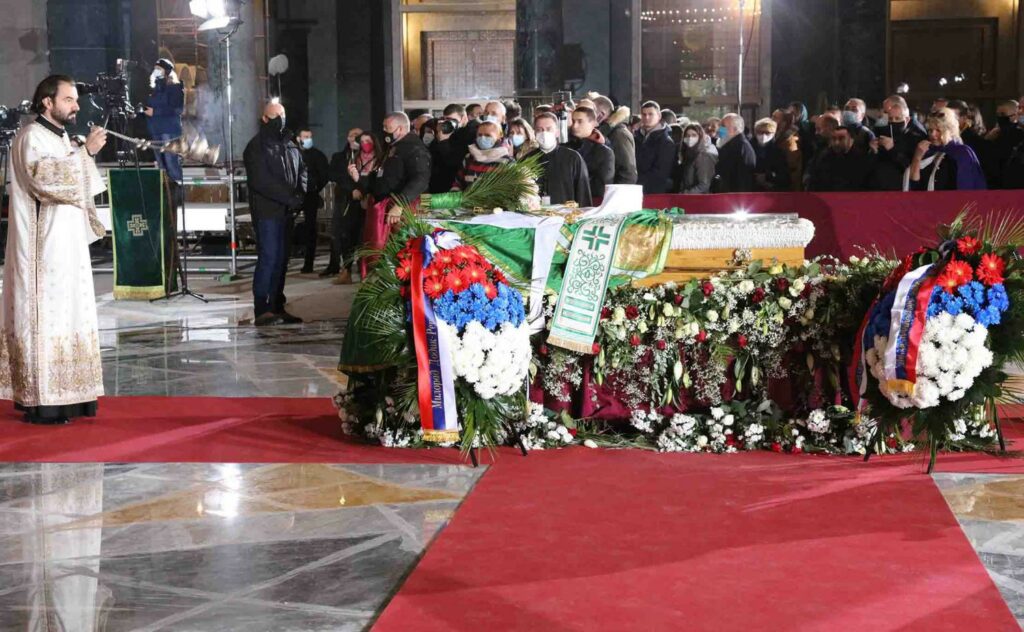 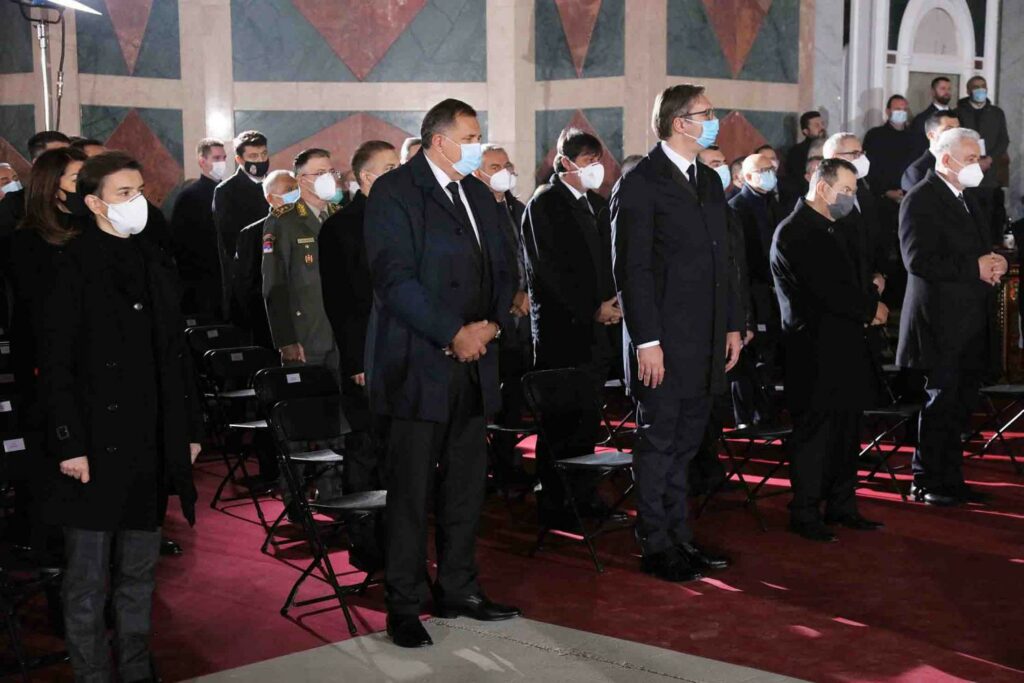 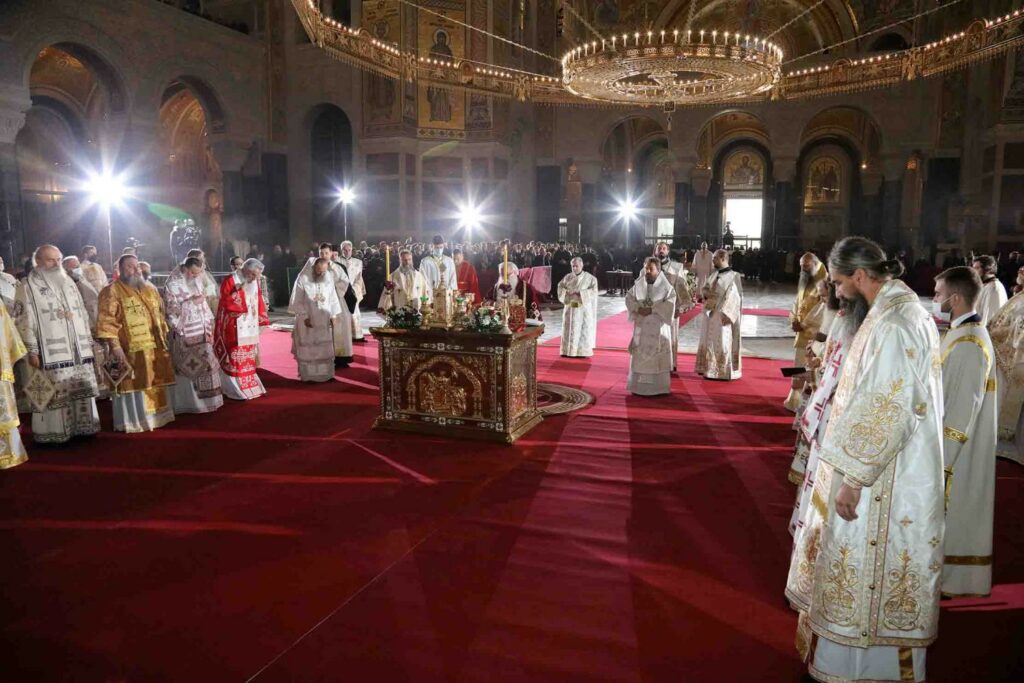 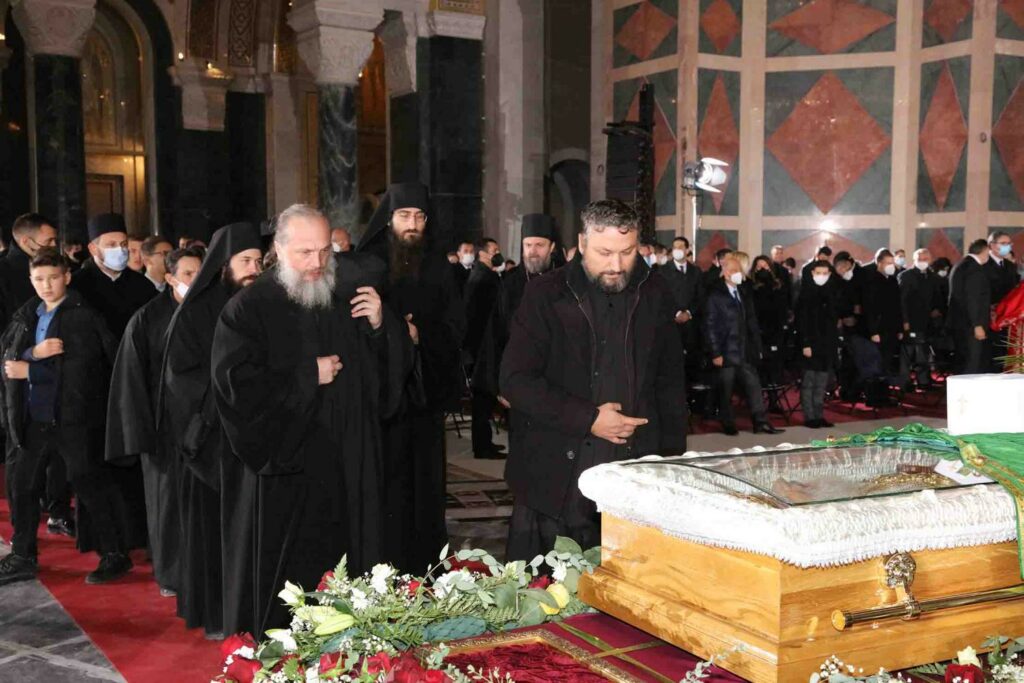 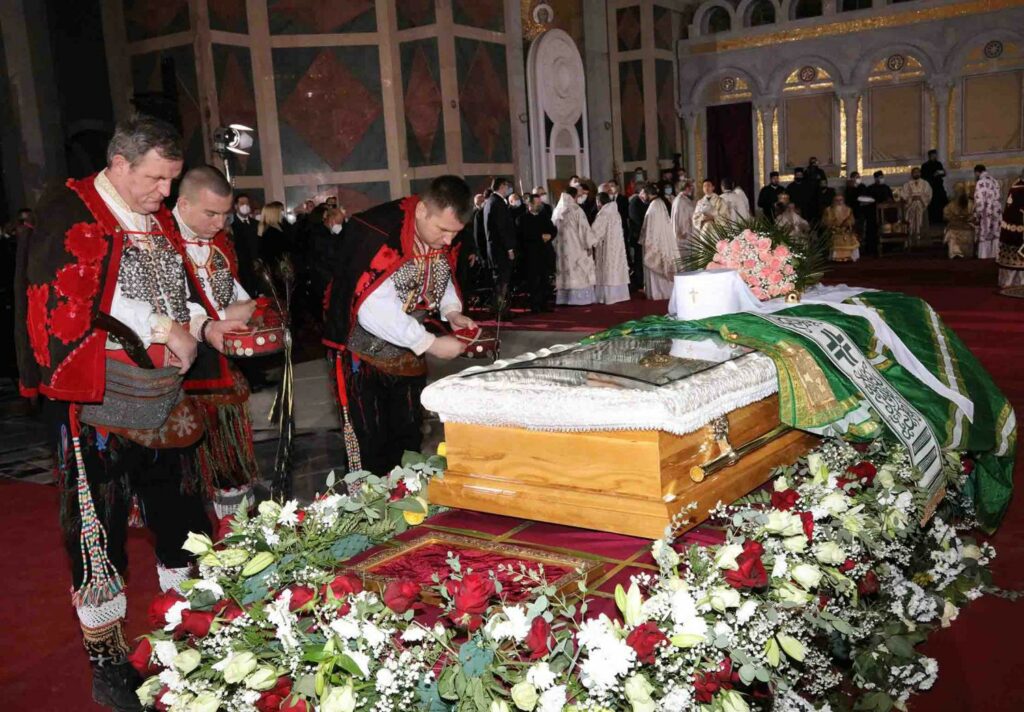 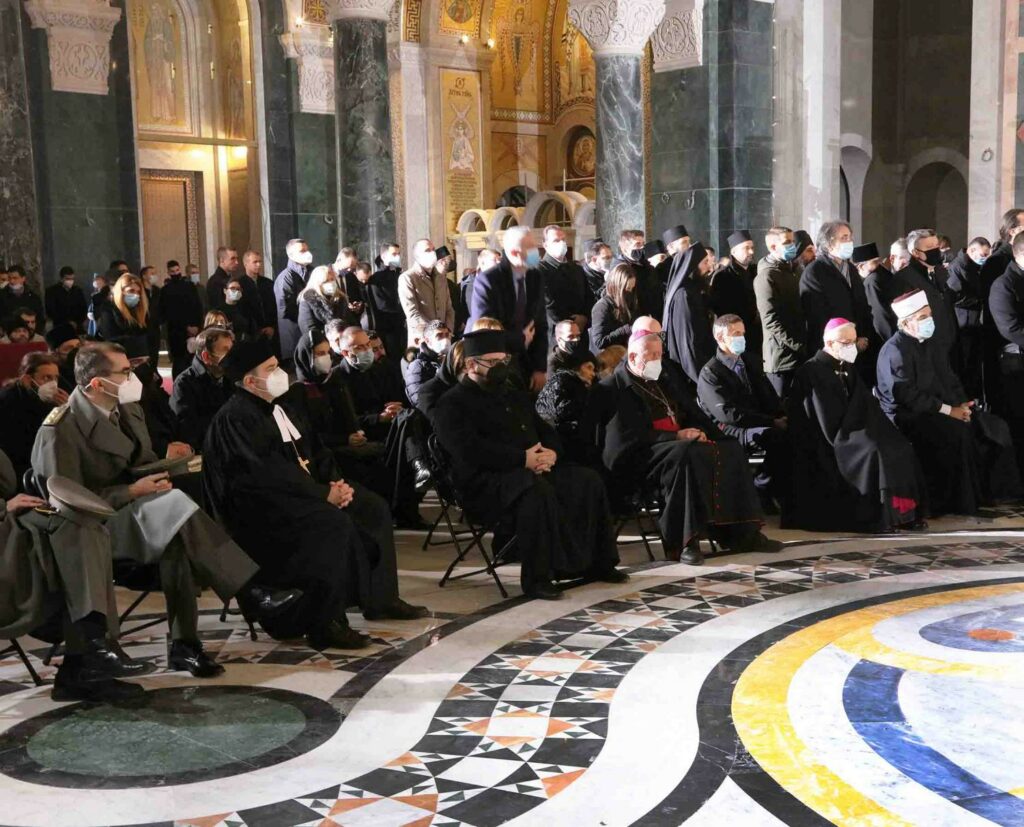 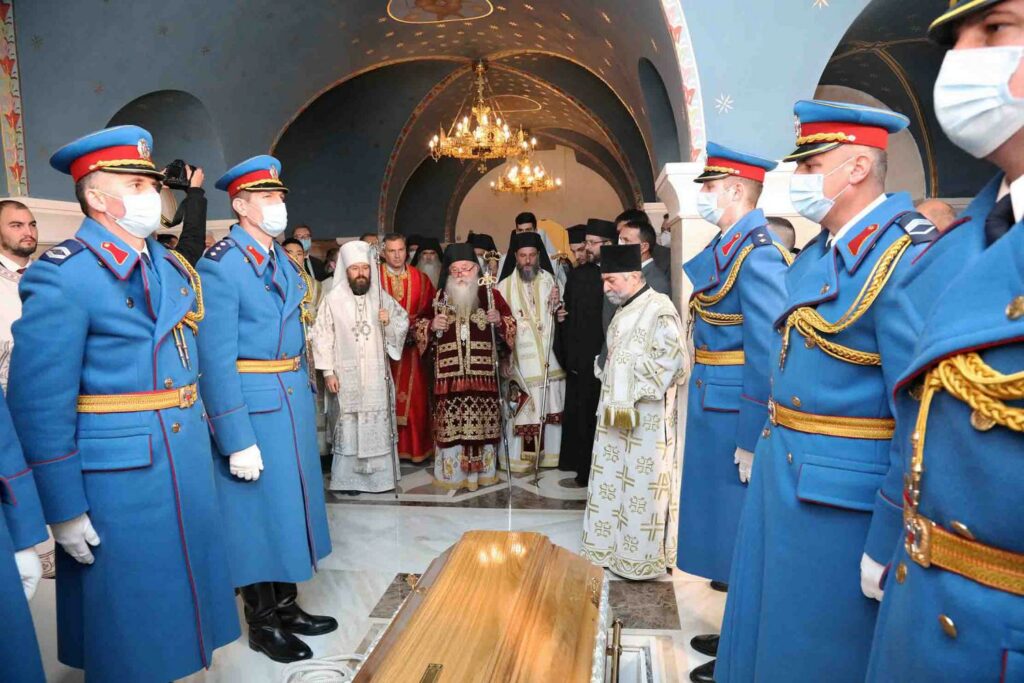 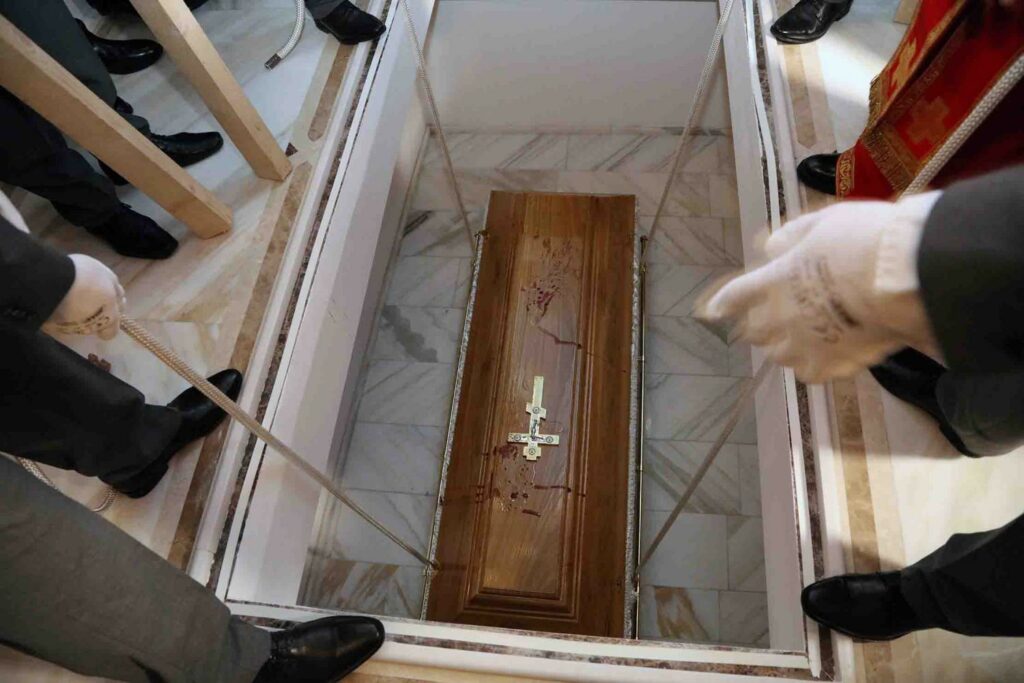 Watch the funeral service for Patriarch Irinej of Serbia (LIVE)