The President expressed relief at the Ecumenical Patriarch’s speedy recovery. They discussed efforts to confront climate change, steps to end the global COVID-19 pandemic, and the importance of religious freedom as a fundamental human right.

Their meeting underscored the critical role that faith communities play in confronting the range of global challenges we all face, as well as the decades-long friendship and partnership between President Biden and the Ecumenical Patriarch.

From the side of the patriarchal delegation, it was stressed that the current situation with the Theological School of Halki cannot continue. As it was underlined, Turkey is trying to put the issue based on reciprocity with Greece and is asking for unreasonable prices, which of course cannot be accepted by Athens.

In this light, the patriarchal mission requested that the issue of the Halki Theological School be removed from the agenda of Greek-Turkish relations. For this reason, they called on the United States to upgrade the issue politically and take an additional step that goes beyond the level of rhetoric.

As has been characteristically saying, Washington must change its tactics, as its policy has not yielded any results for Halki.

As for the situation in Turkey, Joe Biden expressed the feeling that President Erdogan is particularly cramped, as his country’s economy is in dire straits, and appeared curious about how he would react from now on.

The Ecumenical Patriarch knows that the American president is a faithful Catholic. Therefore, he conveyed to him the wishes and heartfelt greetings from Pope Francis, with whom he had met a week ago.

In addition, he emphasized the importance of interfaith dialogue with the Roman Catholic Church and other Christian denominations.

Considering this, he presented to the American president the initiative taken by the Ecumenical Patriarchate together with the Roman Catholic and Anglican Churches to provide vaccines to third world countries that cannot afford them.

Biden showed particular interest, commenting that it was a move that was both morally and practically correct.

The autocephaly of the Orthodox Church of Ukraine

According to the ecclesiastical circles of ANA-MPA, in the meetings, the systematic moves made by the Moscow Patriarchate against the Ecumenical Patriarchate were discussed.

The specific actions taken under the pretext of providing self-determination to the Orthodox Church of Ukraine are contrary to ecclesiastical regularity and undermine the unity of Orthodoxy.

During the discussion, it was found that there is dissatisfaction in the American factor for the non-constructive role played by Russia.

In attendance at the hour-long meeting were Elder Metropolitan Emmanuel of Chalcedon, Archbishop Elpidophoros of America, and the Vicar-General of the Archdiocese Fr. Alexander Karloutsos.

After the meeting with the President Biden, the Ecumenical Patriarch said a few words at the journalists who gathered outside.

We have just now concluded a warm and productive meeting with President Biden, and we express our gratitude to him for his gracious and truly fraternal welcome.

In the course of our conversation, we touched on many issues that pertain to the peace of the world and the hope for increased environmental justice on this single planet that we all share.

We note with appreciation the President’s commitment to environmental responsibility and his willingness to lead the way. We have supported these efforts for the entirety of our thirty-year Patriarchy, and we shall continue to do so.

We expressed to the President our concerns for global stability, and role that constructive and positive religious movements can bring. He thanked us for our decades-long efforts.

Our efforts for promoting Christian unity and interfaith understanding and cooperation have but one principle – dialogue.  We consider dialogue as the most effective means to address any challenge of the present or the future.

We have a responsibility to lead the Local Autocephalous Churches as an elder brother of one family. This sense of family is intrinsically Orthodox, and we cannot allow any shortsighted political agendas to interfere with our relationships that are through and in Christ Jesus the Lord and Savior of the world.

Therefore, we express our abundant satisfaction with the meeting with President Biden today. He is a man of faith and man of vision, and we know that he will offer to this wonderful country and to the world, the best leadership and direction within his considerable powers. 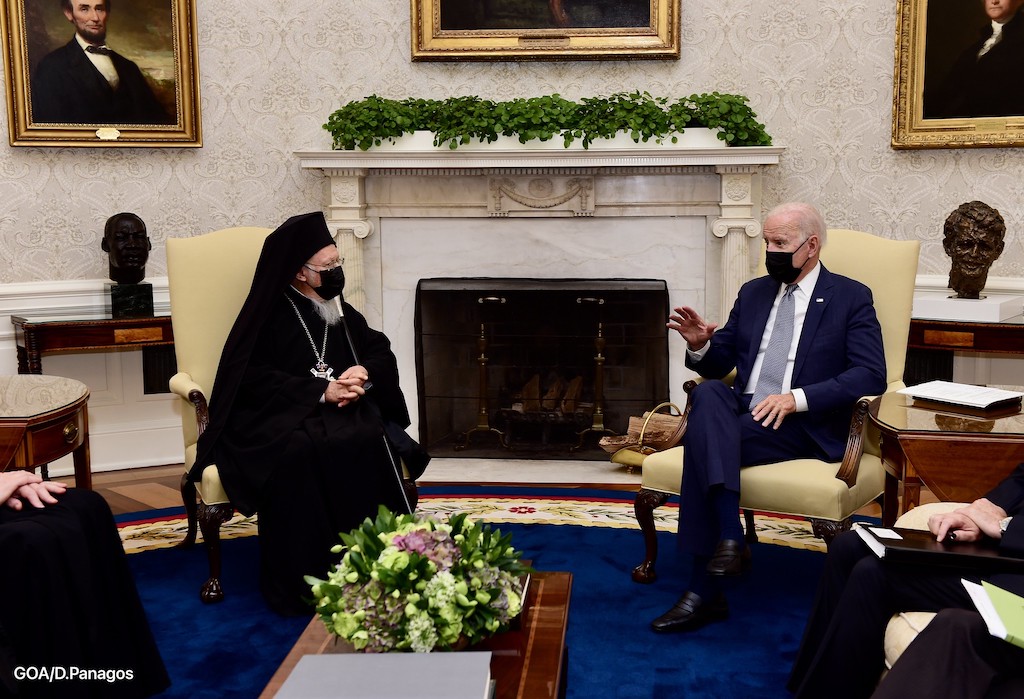 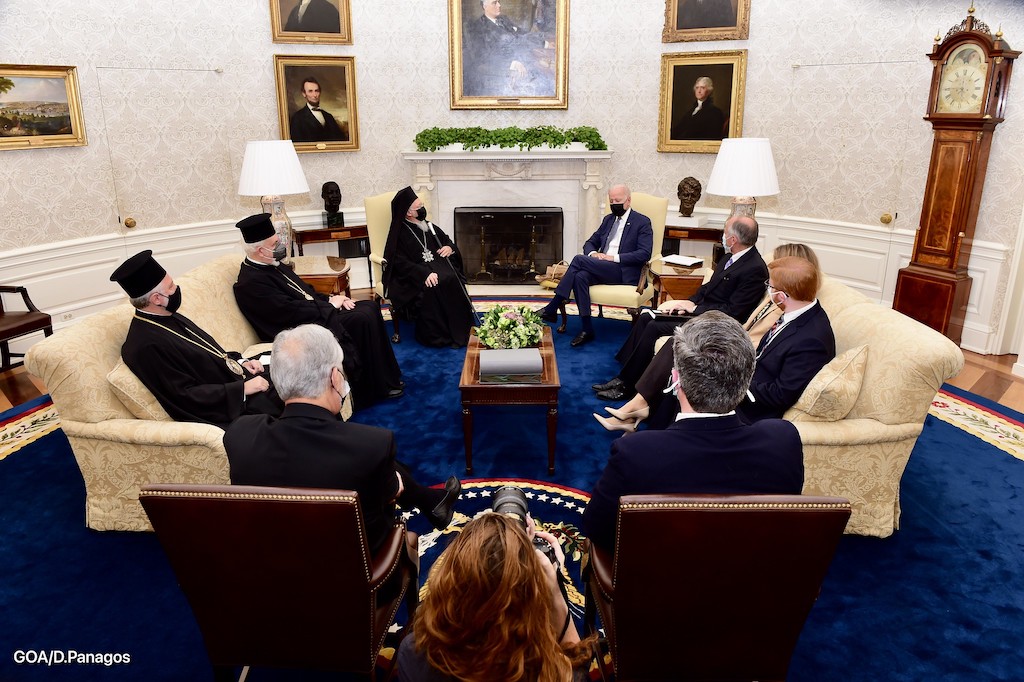 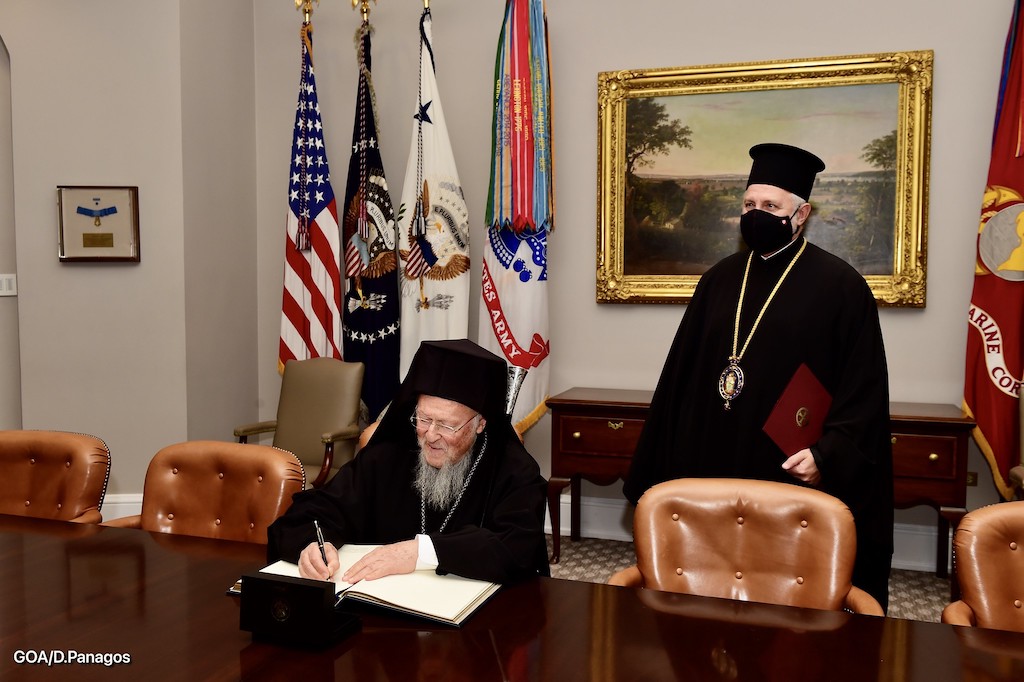 Earlier in the afternoon, His All-Holiness Ecumenical Patriarch Bartholomew met with Secretary of State Antony Blinken, in the James Monroe Conference Room of the State Department.

His All-Holiness informed Secretary Blinken about various issues of concern to Orthodox Christians in the United States and throughout the world as well as about the vision and ministry of the Ecumenical Patriarchate to promote inter-religious dialogue and environmental awareness. In particular, the Ecumenical Patriarch raised concerns about the plight of Christians in the Middle East and Northern Africa, expressing his hope for stability and religious freedom in the region.

He also addressed the urgent need for immediate political action in response to the climate crisis, underlining the responsibility of all leaders to fulfil their promises to address climate change.

Finally, he emphasized the vital importance of inter-religious cooperation among all faith leaders for the sake of mutual tolerance and peaceful coexistence around the globe.

In a statement, media spokesman Rev. Dr. John Chryssavgis noted: “The Ecumenical Patriarch and the Secretary of State held an extended and productive discussion on a number of issues. His All-Holiness raised concerns about the plight of Christians in the Middle East and Northern Africa, addressed the urgent need for appropriate political action in response to the climate crisis, and emphasized the role of inter-religious dialogue for mutual tolerance and peaceful coexistence.” 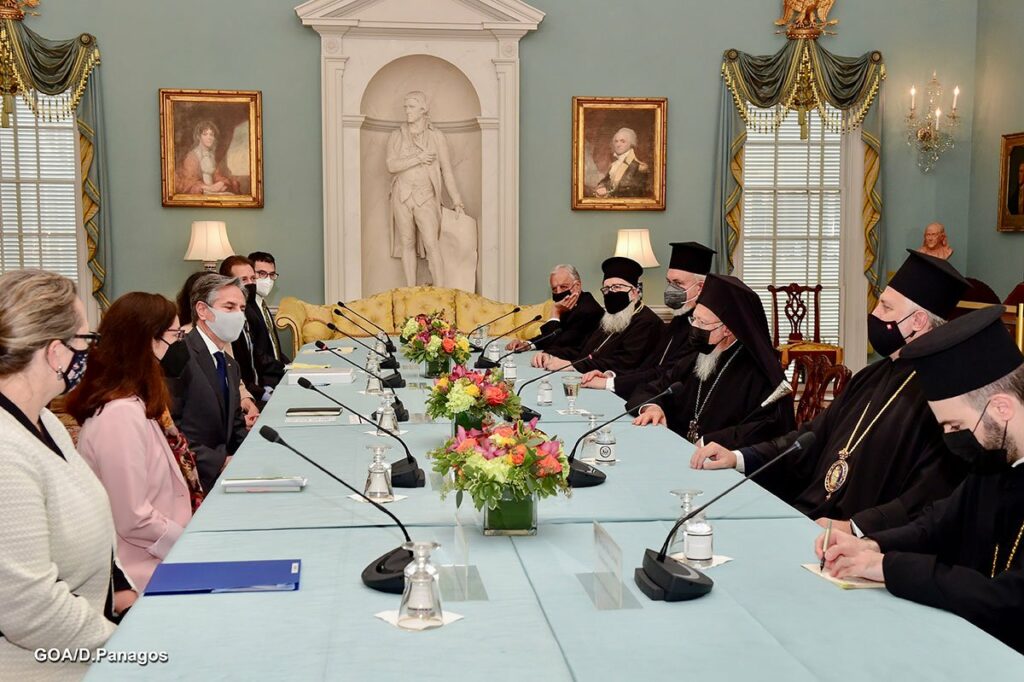 Ecumenical Patriarch Bartholomew met with the Ambassador of Turkey in Athens