Archbishop of America: Officer Tsakos looks down today from Heaven

On Tuesday, May 4, 2021, the Greek community of New York said goodbye together with the New York police to Anastasios Tsakos.

The police officer lost his life on duty when a 32-year-old woman that was driving under the influence of alcohol hit and killed him with her car in the early hours of Holy Tuesday. The funeral was held at saints Paraskevi Greek Orthodox Shrine Church, in Greenlawn, New York.

Archbishop Elpidophoros of America officiated the funeral service, while the Mayor of New York Bill De Blasio, as well as several police officers, were also present. The policeman left behind his two parents, Stavros and Anna Tsakou, his wife Irini, and his two minor children, aged three and five.

Read the full homily of Archbishop Elpidophoros of America:

Family, Friends, and his Comrades in Arms,

In the face of the overwhelming grief and sorrow of this moment, the Church speaks to us with the name of the man we are here to remember and honor today, for Anastasios means “Resurrection.”

We proclaim the fundamental truth of our Faith with every mention of his name, a name that we will repeat for all the days to come, and which will live on forever in our hearts.

Anastasios Tsakos – “Tasso” as he was known, was taken all too soon from his loving Irene, from his precious children, from his parents, from his family and friends, and from his brothers and sisters in the Police Department of the City of New York, which he served with honor, dedication, and service above and beyond the call of duty.

Last week, in the midst of our Holy Week, when the Lord of the Universe laid down His life for the sake of the world, Tasso gave up his life in the service of those he was sworn to protect and to serve.

Like his brothers and sisters who don the “Blue” to serve their fellow human beings, he was engaged in the service of others, when in a split second, that devotion to duty cost him his life. There is no justice on this earth that can bear him back to us. And so we are gathered here today to bear him to his earthly rest.

Officer Tsakos looks down today from Heaven, on all of you who have filled this Church. And in your tears, your pain, your righteous anger, and your bitter sorrow, Tasso is present.

He is present in his beautiful children, for whom we all now bear the duty to tell them of their father.

He is present in his beloved Irene, for whom we all now bear the responsibility to comfort and support.

And they brought Tasso up to be a true Patriot, who served his fellow citizens by choosing to wear the “Blue” – to be a part of the bulwark and vanguard of those who safeguard our lives and freedoms. And he did it in the greatest Police Department in the world, the NYPD.

And he was also the proudest expression of his Greek-American Community. He was a son of Saint Demetrios High School in Astoria, who returned to Greece after college to serve in the Greek Army, finishing his national service as a Second Lieutenant. And with a vision of enlisting in the Aviation division receiving his degree from Dowling College right here in Long Island, he joined the NYPD.

Tasso’s dedication to his family, and to others was not a single facet of his life but was a brilliant glow that suffused every aspect of his existence. There was always a helping hand and a helping heart. His willingness to put others first was a manifestation of his deepest character – one of love, and sacrifice.

His death – so wrong and so unjust, and for all grievous bitterness, shows the depths of sacrifice that our Police and public servants – our Firemen and EMTs – put on the line every day. They leave their homes and the security of their families, to ensure that our homes are safe and that we sleep secure.

The presence of so many Police here today – from all over New York and beyond, is a conscious reminder of how deep their commitment is to service, and how much the sacrifice of their brother in arms – who was always the first to arrive and the last to leave – means to them, and should mean to all of us.

For Tasso was taken all too soon from the loves of his life. His sacrifice is a cross to bear, but one that will lead to resurrection and one day, reunion.

His liveliness, his ingenuity, and his love of craft are painful reminders in this present moment. I pray that over time – which is the great healer of loss, the little things that you treasure above all others, Irene, will give you some peace, and memories of love and fondness.

For those who have come from far and wide to be here to pray with us today, I will not say that you do honor Tasso, so much as his sacrifice honors you. Your profession and your service to our community is sanctified by Tasso’s devotion to duty, which did not shrink from giving the last full measure. You are all heroes of our communities, who offer your lives every day for all of our lives. I earnestly pray that God will keep you safe and sound, as you continue your honorable service to us all. I cannot explain why the life of Officer Anastasios Tsakos was required at this moment, but I do know that neither his life nor his death was in vain. We are better people because he was the best of us.

I want to recognize especially the members of Saint Paul’s Society, our NYPD fraternal organization of Orthodox Christians. I know that you will be a constant support to Irene, and Jenny, and little Stavro. It is the loving embrace of all of you, which I pray will allow Irene and the family to carry on Tasso’s name and legacy.

And I want to recognize the munificence of The Tunnel to Towers Foundation, which was established in memory of firefighter Stephen Siller, who laid down his life to save others on 9/11. The Foundation is securing the home of Tasso’s family.

Between that tunnel and those towers, the Saint Nicholas Church is rising again, a resurrection that Tasso’s name invokes, and for which he now prays with us in Heaven.

Officer Tasso Tsakos was this and more, much more. We honor his life, and we recognize in his death the faithfulness of a heart that was filled with love for all. Although we desire with all our hearts to have him with us, we can know that we now have a Guardian Angel to look over us.

Tasso was faithful unto his End of Watch, and now he watches over us: over his beloved Irene, his precious Jenny, and Stavro, and overall his sisters and brothers in Blue.

May our Loving and Merciful God grant you all peace, comfort, and the consolation that comes from our hope of the Resurrection, and from the knowledge of life everlasting.

And may He grant to the soul of his faithful servant, Anastasios, eternal rest in the bosom of Abraham, repose in the tabernacles of the righteous, and a place in His Heavenly Mansions.

May his memory be eternal. 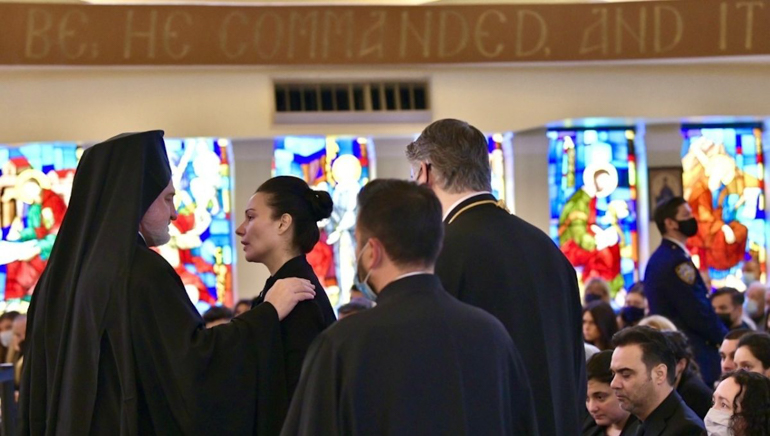 Archbishop of America met with the Clergy of Westchester and Connecticut

Archbishop of America: Make this Father’s Day an opportunity for generosity