The graduation ceremony of the the Yafo School graduates

On Wednesday evening, July 6, 2022, the graduation ceremony of the four graduates of the Arab-speaking School of the Patriarchate of Jerusalem in Yafo (Ancient Joppa) near Tel Aviv was held in an open ground space of the School’s courtyard.

The graduation ceremony was honored by the presence of Patriarch Theophilos of Jerusalem, Archbishop Aristarchos of Constantina, Archbishop Damascene of Yaffo, Priest Issa Mousleh, Archdeacon Mark, and the Priest of Yaffo community, Fr. Constanti.

The ceremony began with a prayer, and then the School Principal Najla Hanhan delivered the introductory speech and invited the four graduates on stage. The Principal described the work of the School, which overcame the difficulties due to covid and other factors and prepared the graduates to succeed in their exams for the Universities of Israel.

The School Principal also thanked His Beatitude for the moral and financial support of the School of the Patriarchate.

The ceremony continued with the addresses of the graduates, in Arabic, Hebrew, and English. The students expressed their gratitude to the School for the education they received for twelve years. There was also a video with the school activities of the students in the previous year and they concluded by passing over the staff to the next year’s graduates.

Finally, Fr Issa read the Patriarch’s address in Arabic, which underlined the value of education as the foundation of society, and thanked the School Principal and the Teachers for their educational work.

In the end, the Patriarch gave the graduation certificates to the graduates, wishing them success in their future careers. 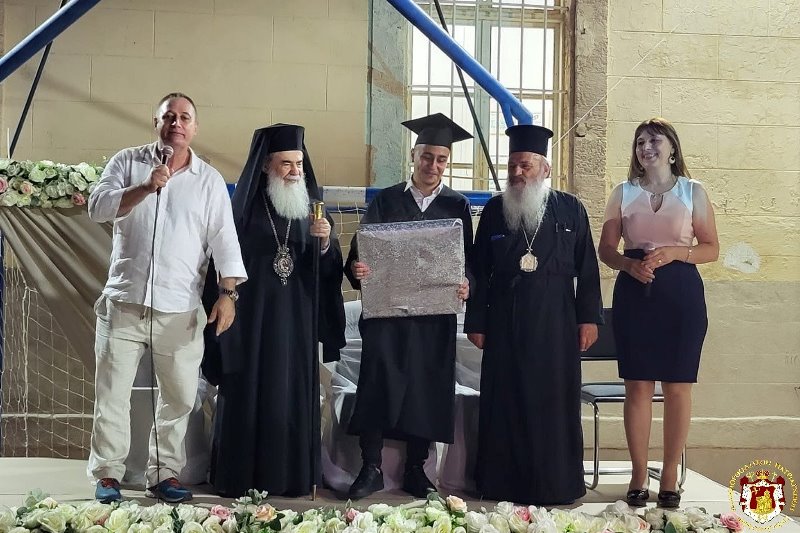 Ecumenical Patriarch: Russia is trying to partition Ukraine and annex its eastern part