Ecumenical Patriarch: Russia is trying to partition Ukraine and annex its eastern part

On the occasion of the holy memory of St. Kyriaki the Great Martyr, the Ecumenical Patriarch Bartholomew presided over the Divine Liturgy held in the celebrating namesake Holy Church of the Kontoskali Community on Thursday, July 7, 2022.

The Divine Word was preached by the Grand Syncellus of the Church, Mr. Iakovos.

Bishop Michael of Cumans, Exarch of the Ecumenical Patriarchate in Kiev, clergymen from abroad, Archons Offikialioi, faithful from Constantinople and a large group of pilgrims from Athens were in attendance.

Afterwards, in his speech in the Community Hall, the Ecumenical Patriarch referred to today’s 50th anniversary of the demise of the late Patriarch Athenagoras:

“Our celebration this year here in Kontoskali is also indissolubly linked to our illustrious Predecessor, Ecumenical Patriarch Athenagoras. Today marks exactly fifty years since his passing away. What can we first remember about this great ecclesiastical personality, who adorned the all-glorious Ecumenical Throne for twenty-four consecutive years, and from whose honourable hands we were blessed to receive the title of “Teacher of Orthodox Theology”, upon our graduation from the prestigious Theological School of Halki in 1961, and later the title of Archimandrite? His unswerving struggles for the defence of the rights of the Holy Great Church of Christ? The first pan-Orthodox Conferences in preparation for the Holy and Great Synod of the Orthodox Church and his concern for the promotion of pan-Orthodox unity? His historic meeting in Jerusalem with the late Pope Paul VI in 1964, the mutual abrogation of the anathemas between Rome and Constantinople, the initiation of a dialogue of love between the Roman Catholic and Orthodox Churches, and his general contribution to the promotion of the ecumenical movement and inter-Christian cooperation? His love for the Romanity of Constantinople and his tears after the Istanbul pogrom in September 1955 and the shrinking of the Greek community there? His wise admonitions and exhortations to the students of the Holy Theological School of Halki, which he adored and where he spent the most of the summer months?

For all of the above, as a minimal counterpart of gratitude and recognition of his immense contribution and invaluable Primate’s ministry, our Holy and Sacred Synod, upon our own proposal, decided, to commemorate the fiftieth anniversary of the demise of the Patriarch by performing a Patriarchal and Synodal Divine Liturgy and a memorial service next Sunday, July 10, in the Patriarchal Church and, thereafter, by holding a literary memorial service in the Throne Hall, where His Beatitude, Metropolitan Athenagoras of Kydonies, supervisor of the Bosphorus Region, will deliver a speech. We avail ourselves of our presence here to invite all of you to attend the Patriarchal Liturgy in the Phanar on Sunday, in order to pray together for the repose of the soul of Patriarch Athenagoras.”

“In the canon of the Orthodox Church, there are listed Saint Kyriakos the Anchorite, whose memory is commemorated on September 29, and Saint Kyriaki, who is celebrated today. Both bear the name of the Lord. But we, all Christians, also bear the name of Christ, our Lord and God and Saviour, since the first century, when the followers of Christ were called, first in Antioch, “Christians”.

This Christian’s name is the greatest title of honour we could wish for and aspire to. People feel proud and happy when they belong to royal or noble families, when in their family tree there are names of famous personalities. But being a member of the Kingdom of Christ and bearing His glorious and supreme name is man’s true and greatest glory.

But this is not only honor and glory and a reason for boast. It also implies responsibilities, which are summed up in the obligation of the Christian to be a Christian not only in name, not only in word, but also in deed. The Lord Himself emphasized this truth, saying: “Not every one who says to me, ‘Lord, Lord,’ shall enter the kingdom of heaven, but whoever does the will of my Father who is in heaven” (Matt. g, 21)”.

Today’s commemoration of Saint Kyriaki, a native of Melitini, reminds us of our fundamental duty to be true Christians, with a living faith and corresponding works. Every Christian is a soldier of Christ. He is obliged by his baptism to fight against sin. The Christian who refuses this battle breaks his promise and commitment. On the contrary, the fact that he participates in the worshipping life of the Church, that he introduces himself as a Christian, is a public confession that he wishes to be considered as a soldier of Jesus Christ. And the soldier fights with the breastplate of righteousness, with the coat of arms of faith, and with the Lord Jesus as his leader and finisher, in whose name he “all things celestial, terrestrial and infernal will bring to their knees” (see Phil. b. 10).

And those who have been victorious in this spiritual struggle, like St Kyriaki, are infinite. We paternally and cordially wish that the Lord of glory will crown your spiritual struggles with the same crown of victory.

At another point in his speech, he congratulated Metropolitan Maximos of Silivria, the Supervisor of the Ipsomatheia District, and the clergymen who serve in it, as well as the President of the Kontoskali Community, Anastasios Chondropoulos, and his willing collaborators, “for the zeal and exemplary willingness with which they carry out the work entrusted to them of managing community affairs”.

Introducing the present Bishop Michael of Cumans, the Ecumenical Patriarch referred to the “unjust and unholy” ongoing war in Ukraine, “which Russia began with its invasion of Ukrainian territory and is trying to partition this country and annex its eastern part, to connect it to its territories, as it did a few years ago with Crimea. Unfortunately, it is an unpredictable, unjustified, unjust war. It has been condemned by our Ecumenical Patriarchate from the very beginning when it exploded. And despite all the appeals of His Holiness the Pope, our Ecumenical Patriarchate and many Heads of State, International Organizations, etc., Russia does not give in and the war continues with thousands of victims. There are at least thirty thousand Russian soldiers who have been killed in this war, and as many, if not more, will be on the other side of Ukraine, innocent people, civilians, elderly people, children. Schools, hospitals, churches were destroyed. And we wish again and pray day and night that this war will end. To the Saint of Cumans, who has the courage to live under the bombs and gunfire, we wish strength, courage and we pray to God to protect him and all our Orthodox brothers and sisters in Ukraine, and those who belong to the new Autocephalous Church, under Metropolitan Epiphanius of Kiev, and those who have not yet joined it.”

Earlier, the Ecumenical Patriarch was addressed by Metropolitan Maximos of Silivria.

Afterwards, the Ecumenical Patriarch went to the Holy Monastery of Zoodochos Pigi in Balıklı and performed a Trisagion at the Tomb of his Venerable Predecessor, Patriarch Athenagoras, on the occasion of today’s anniversary. 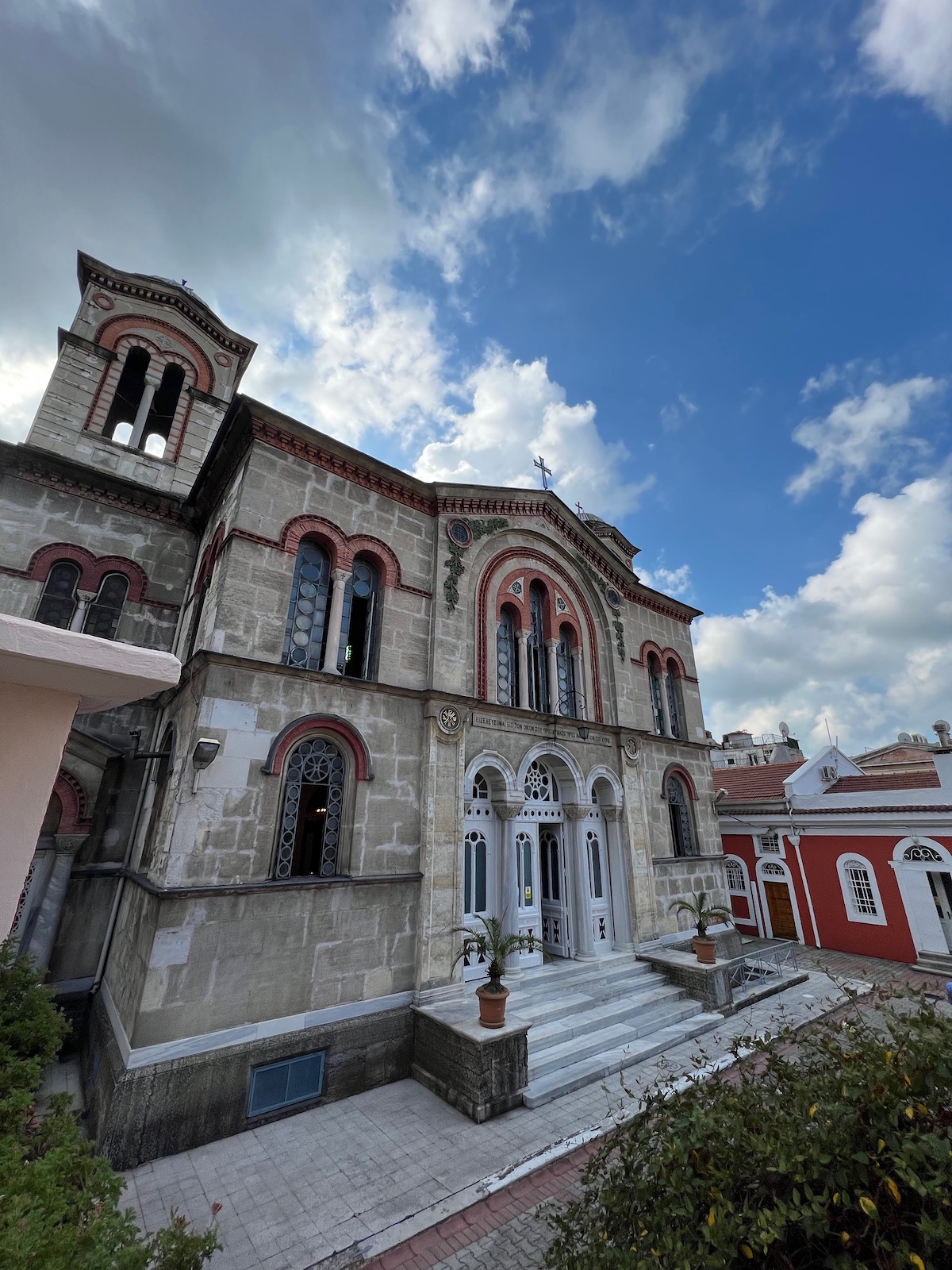 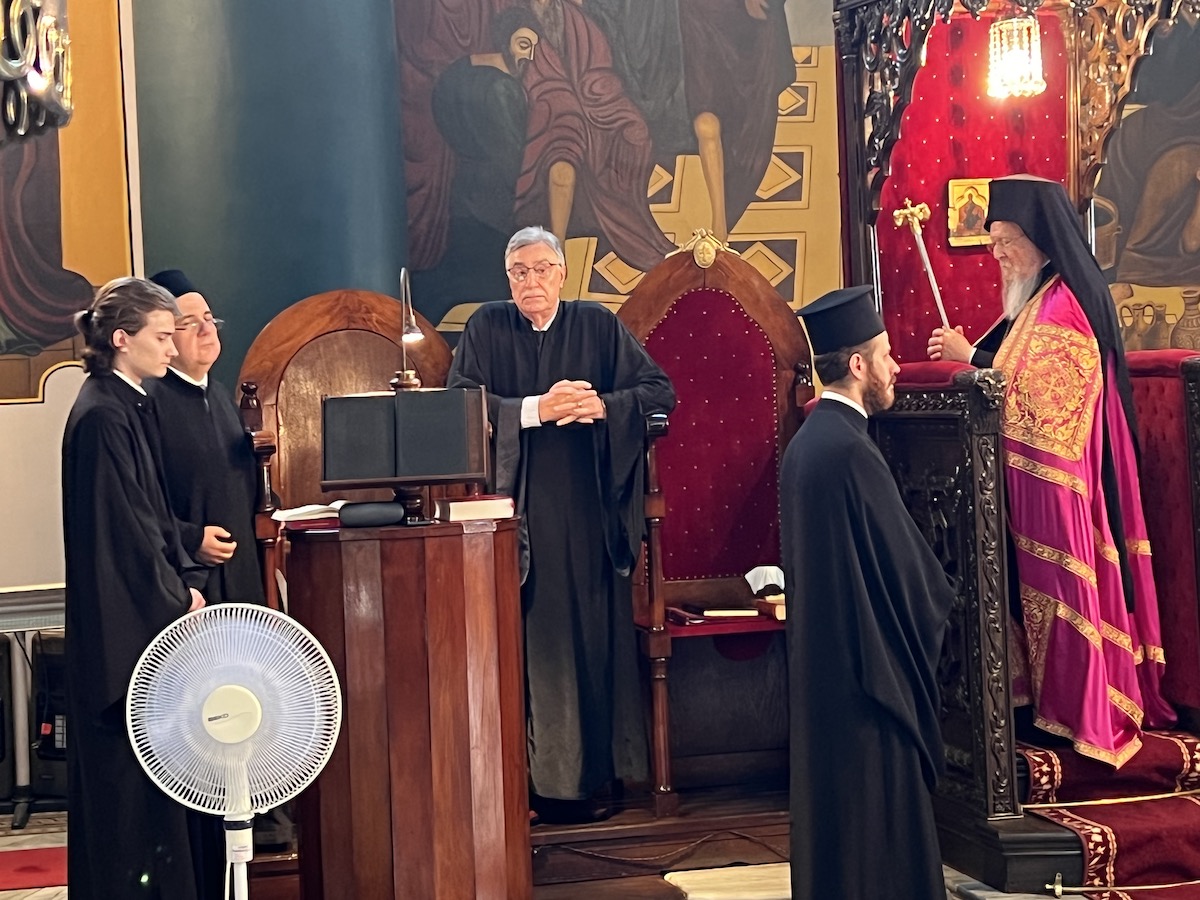 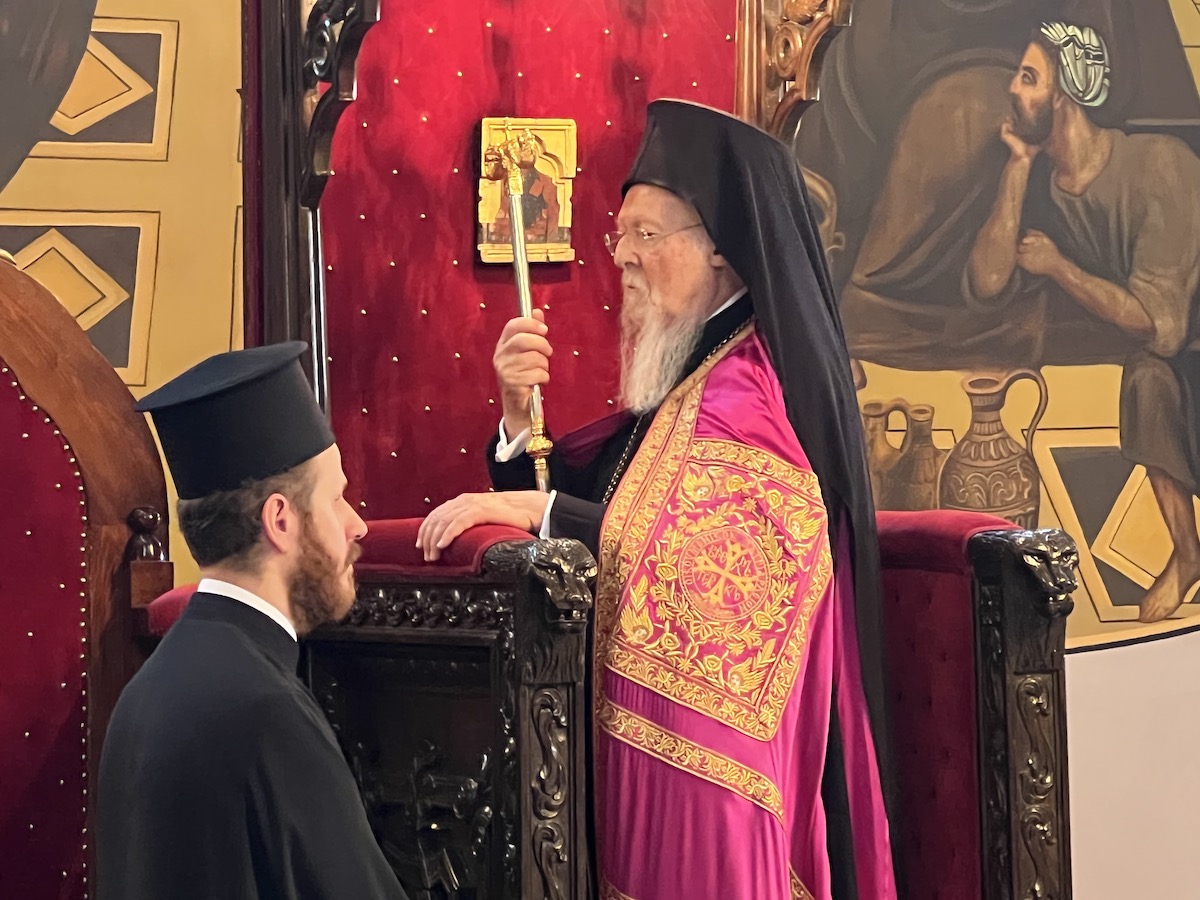 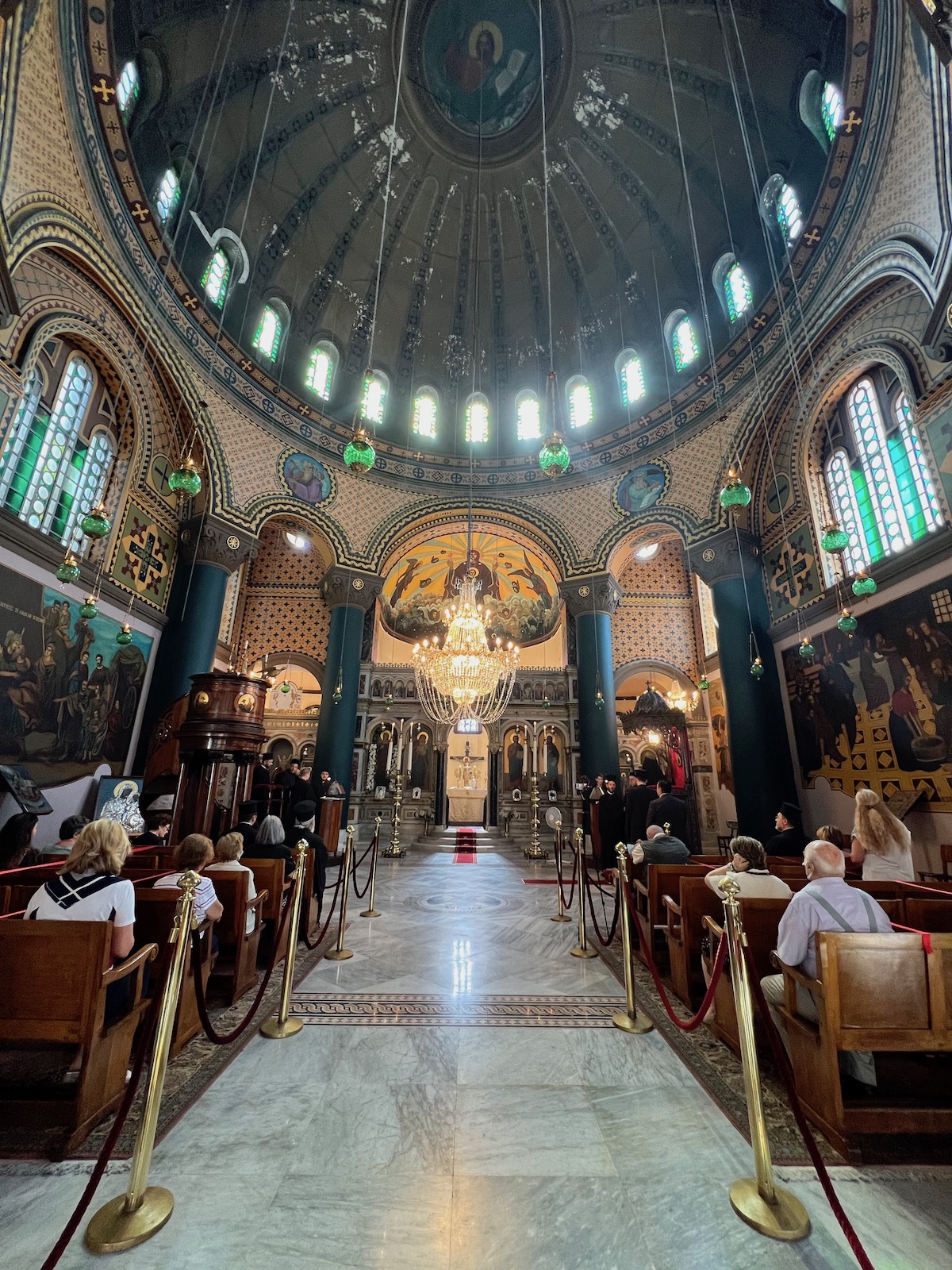 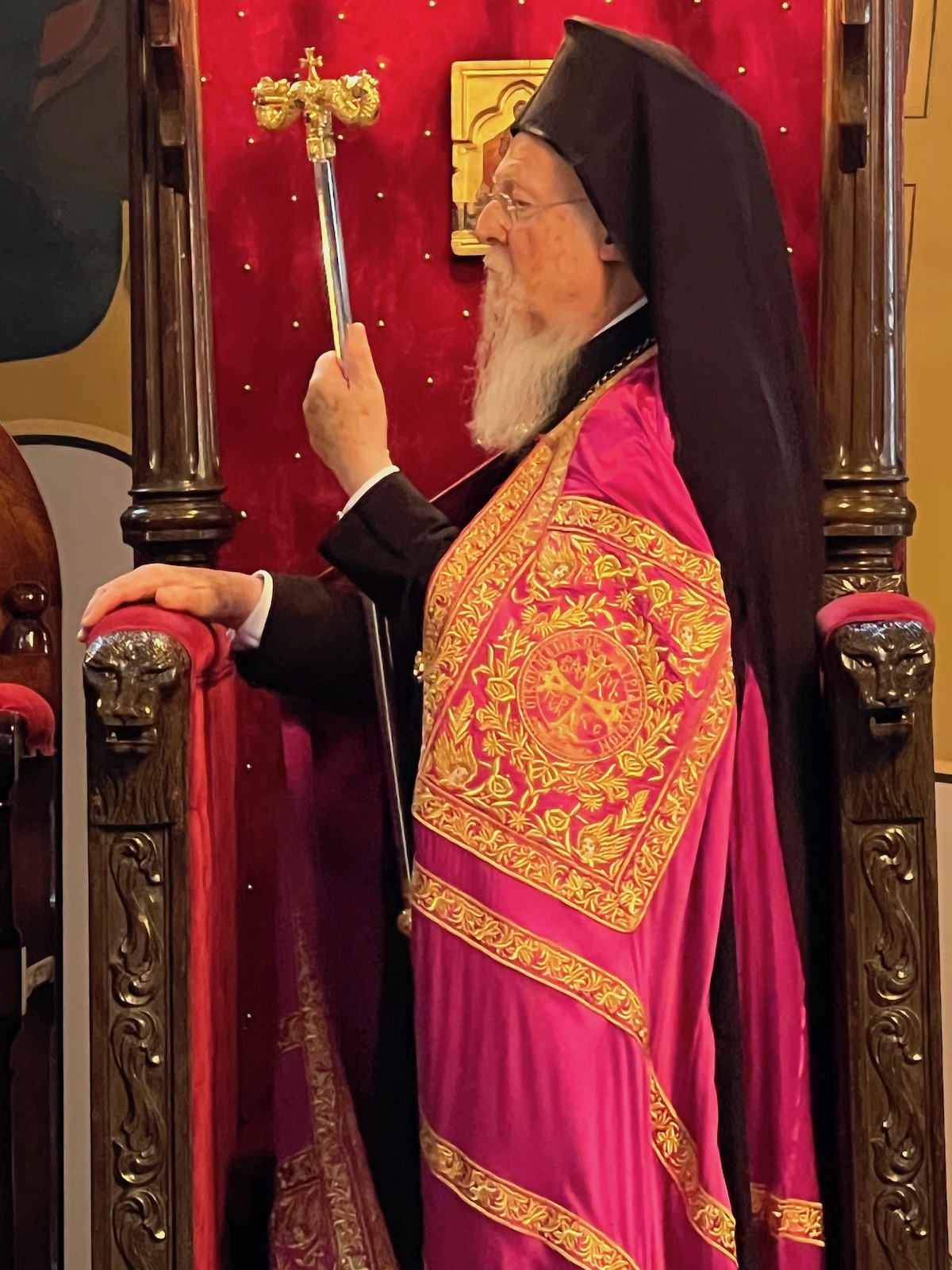 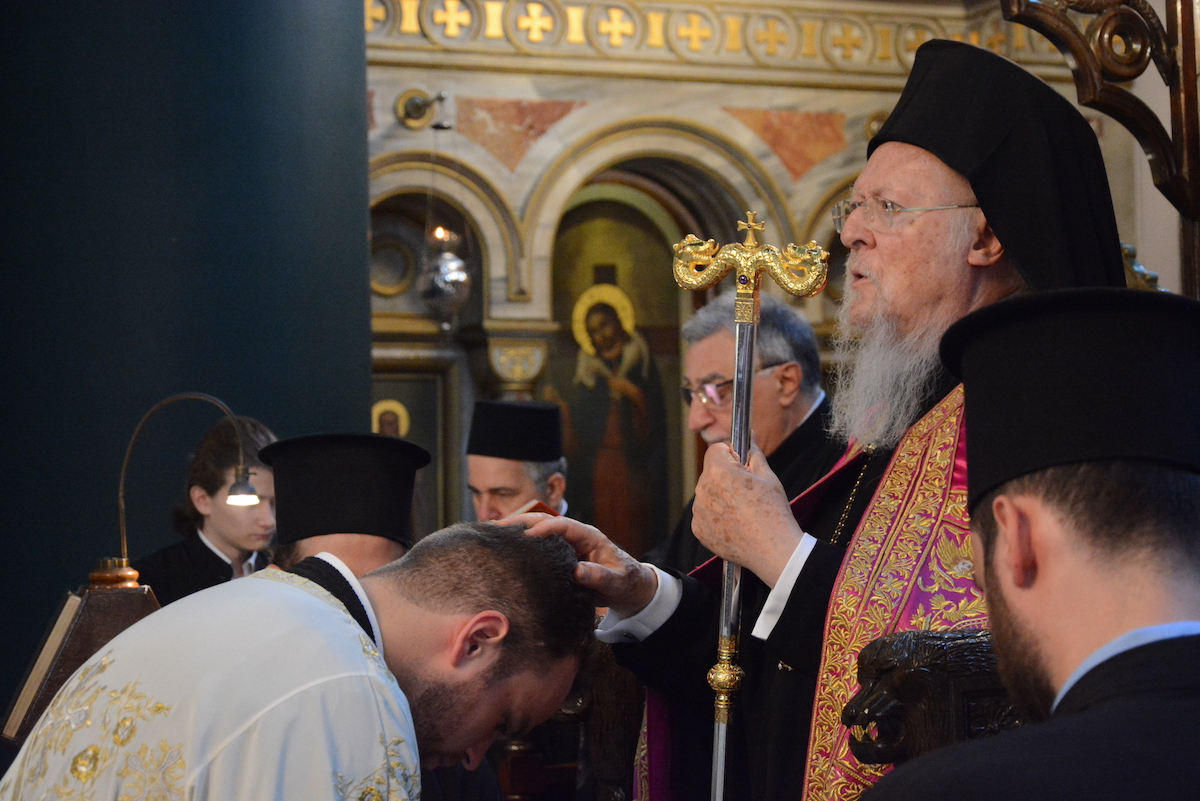 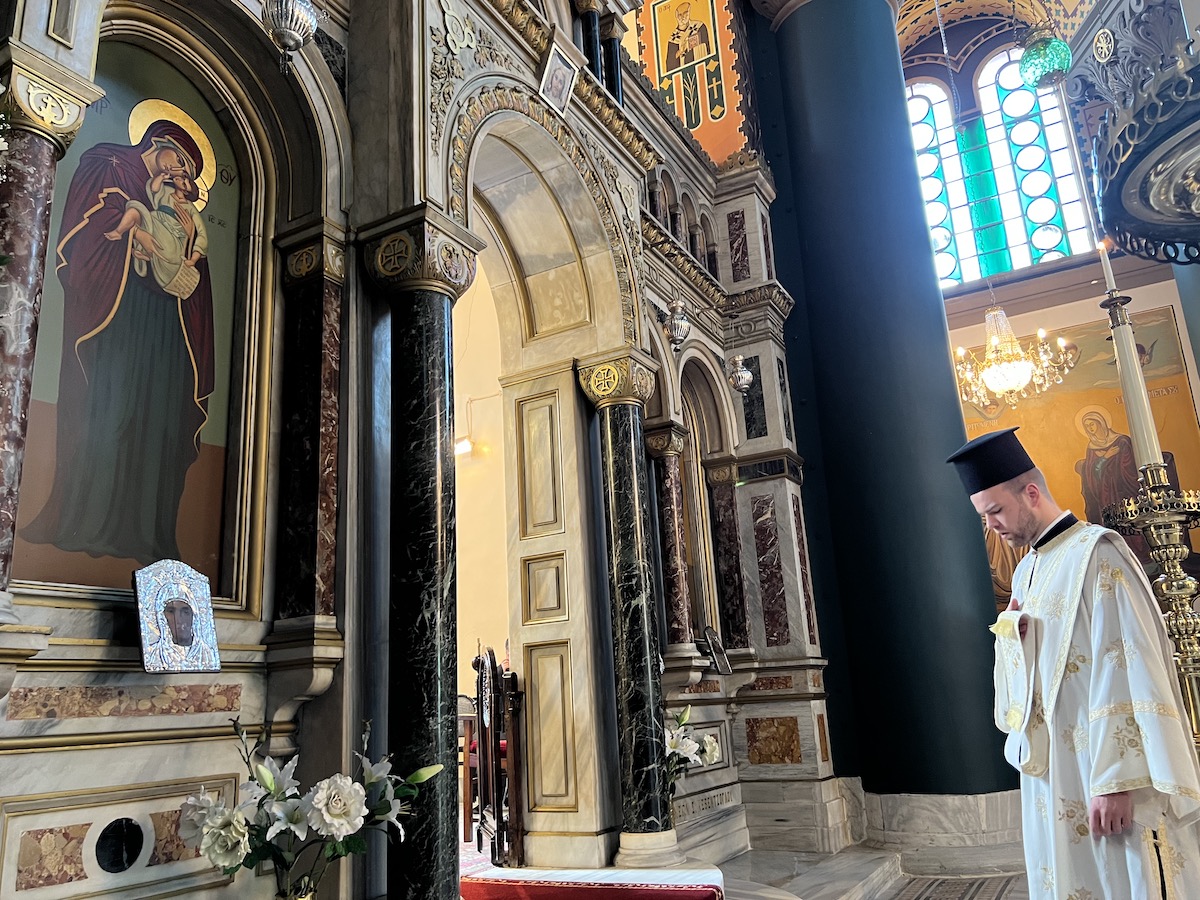 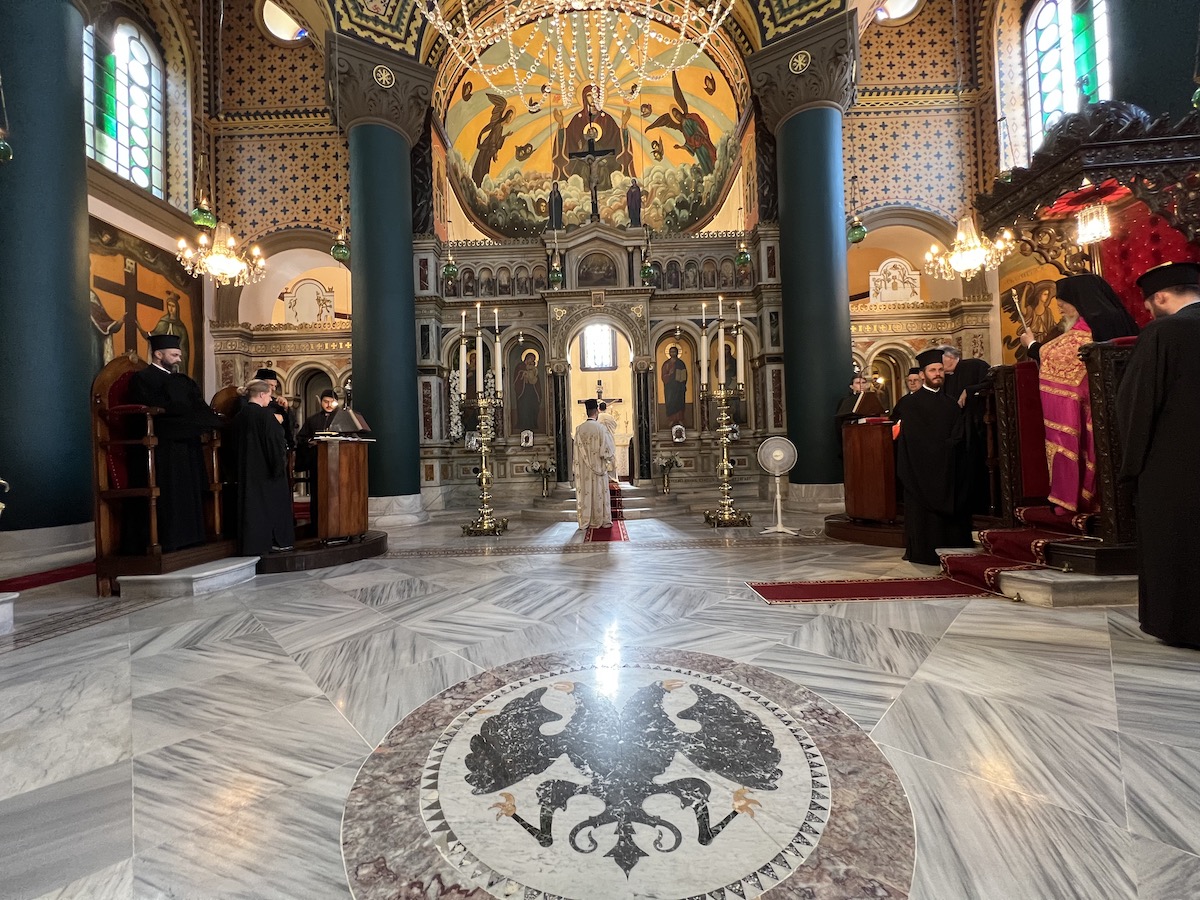 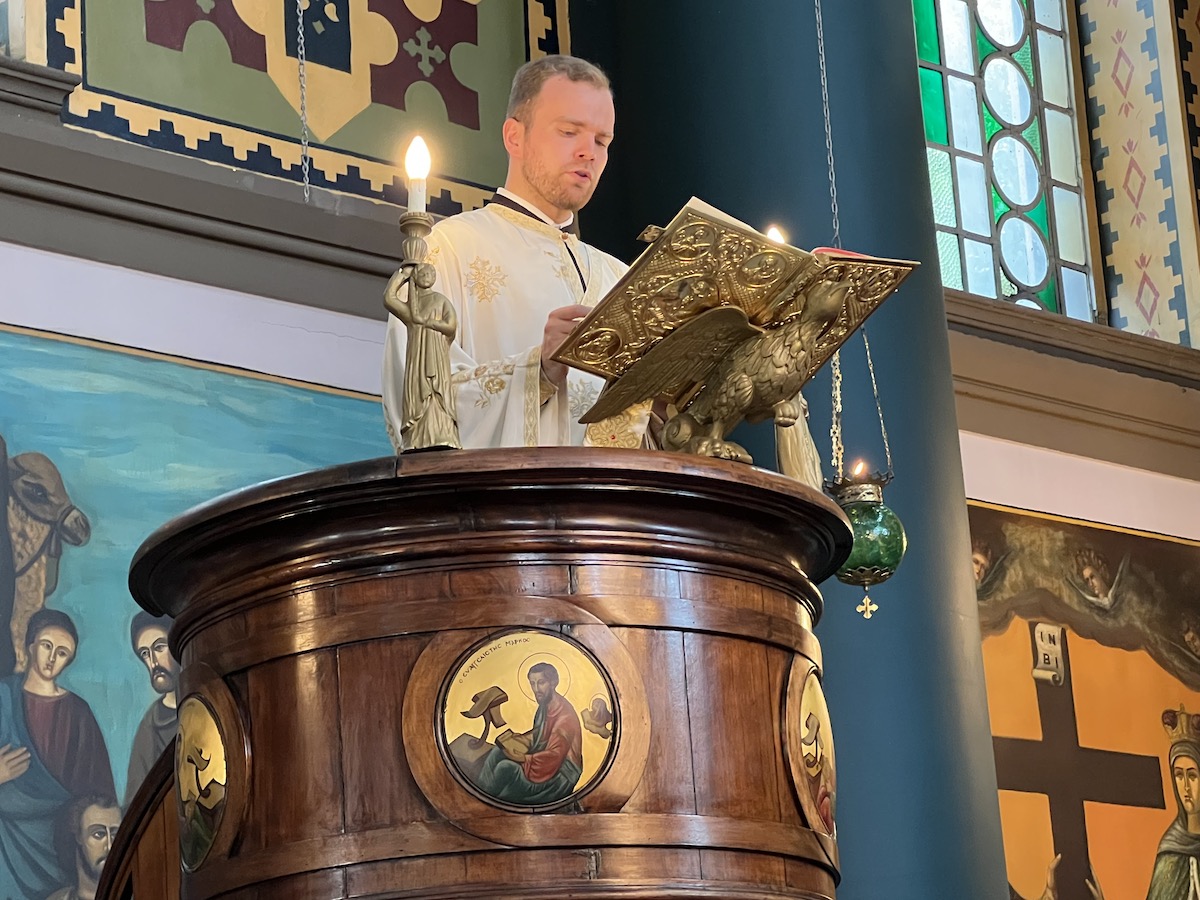 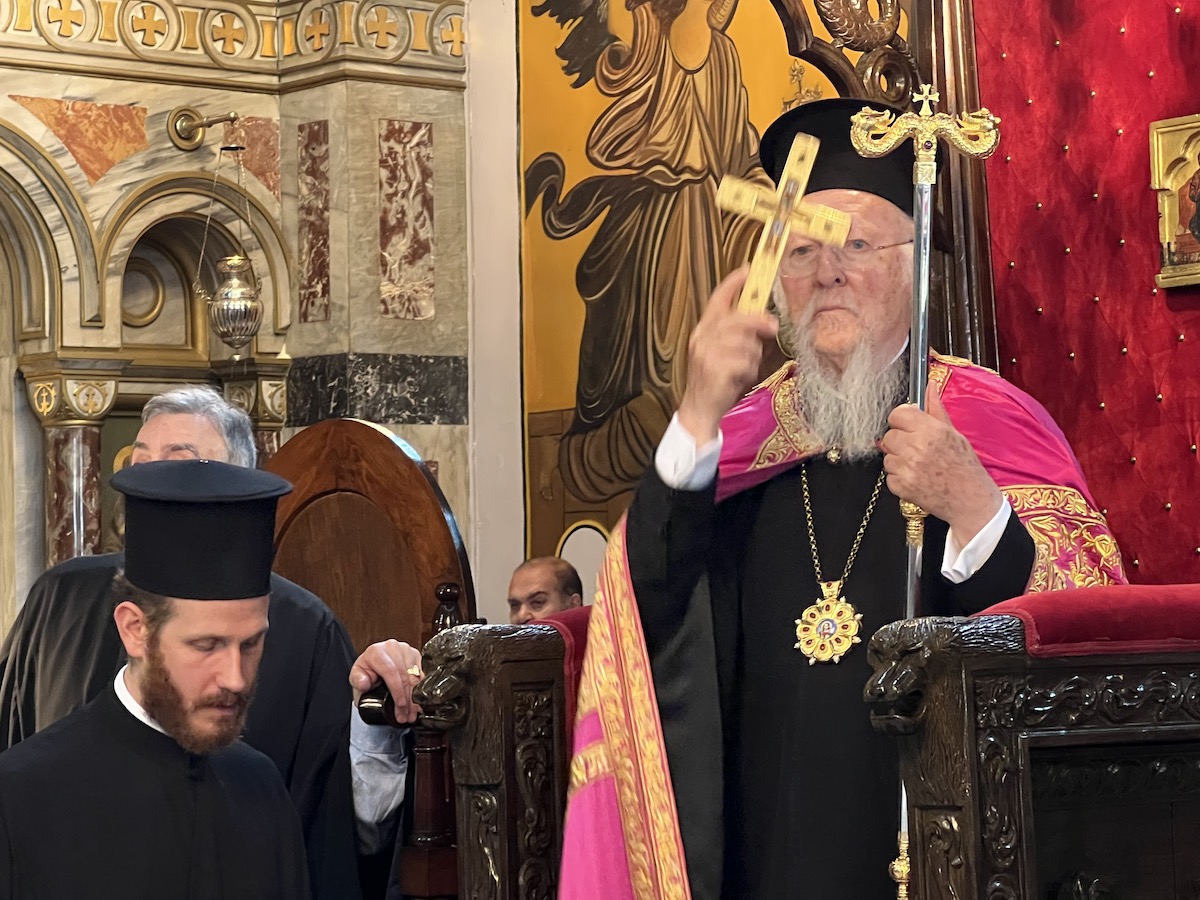 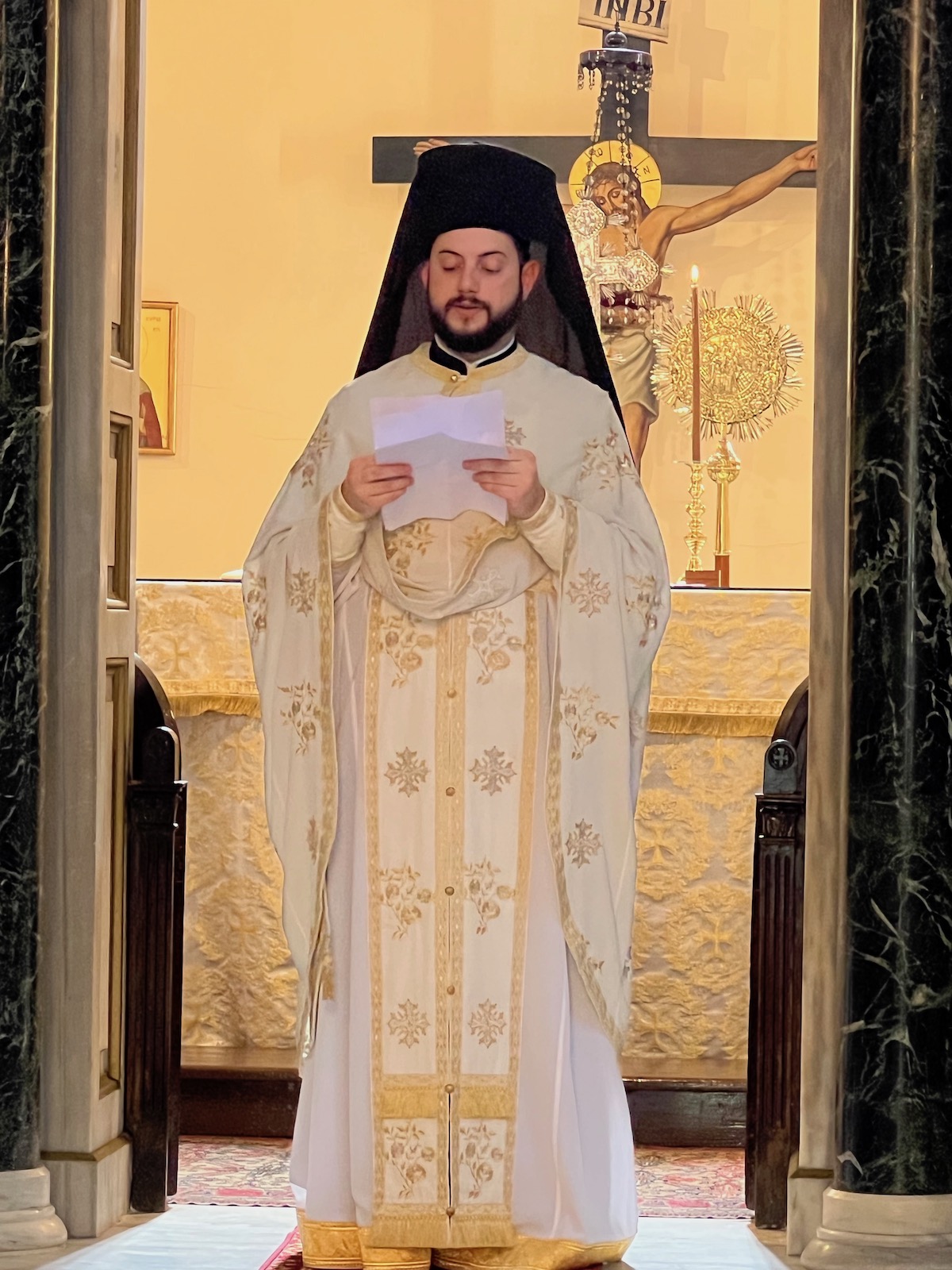 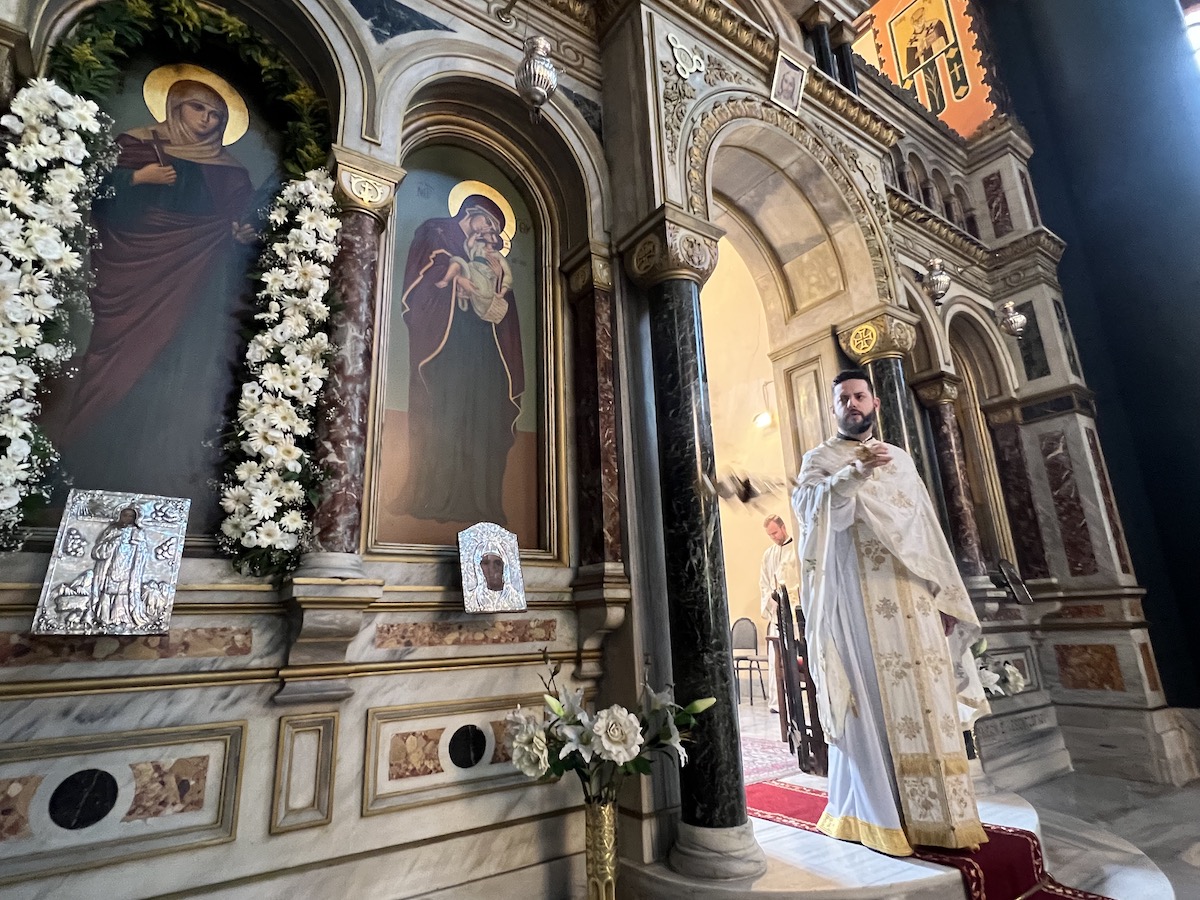 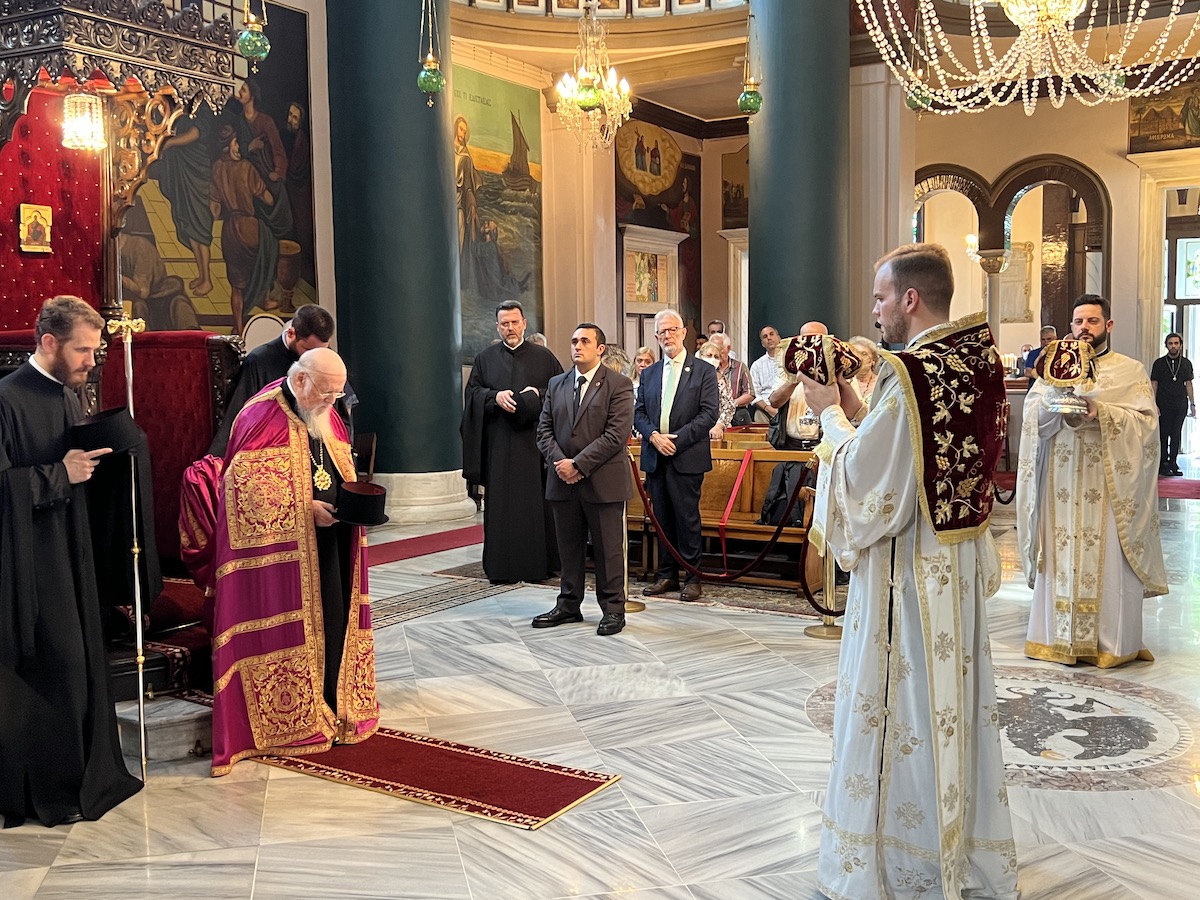 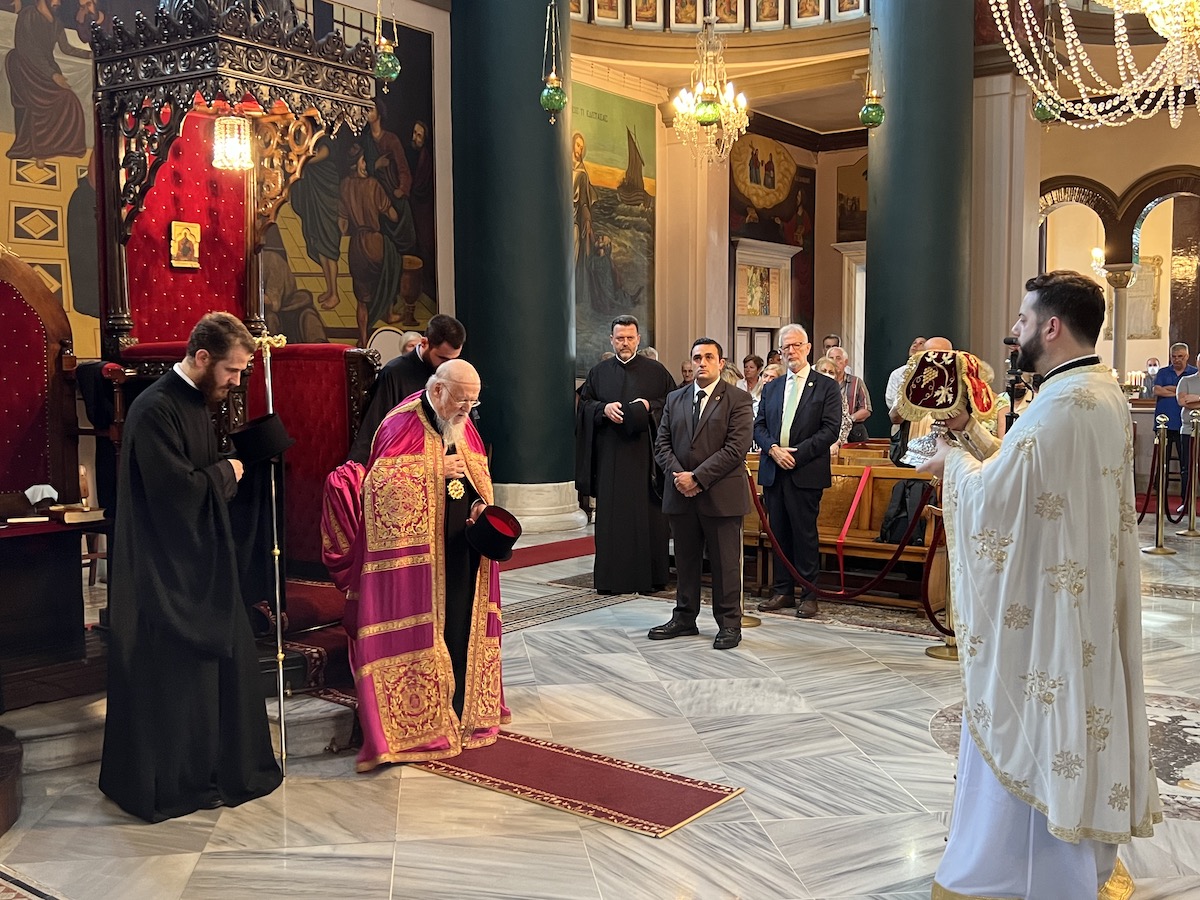 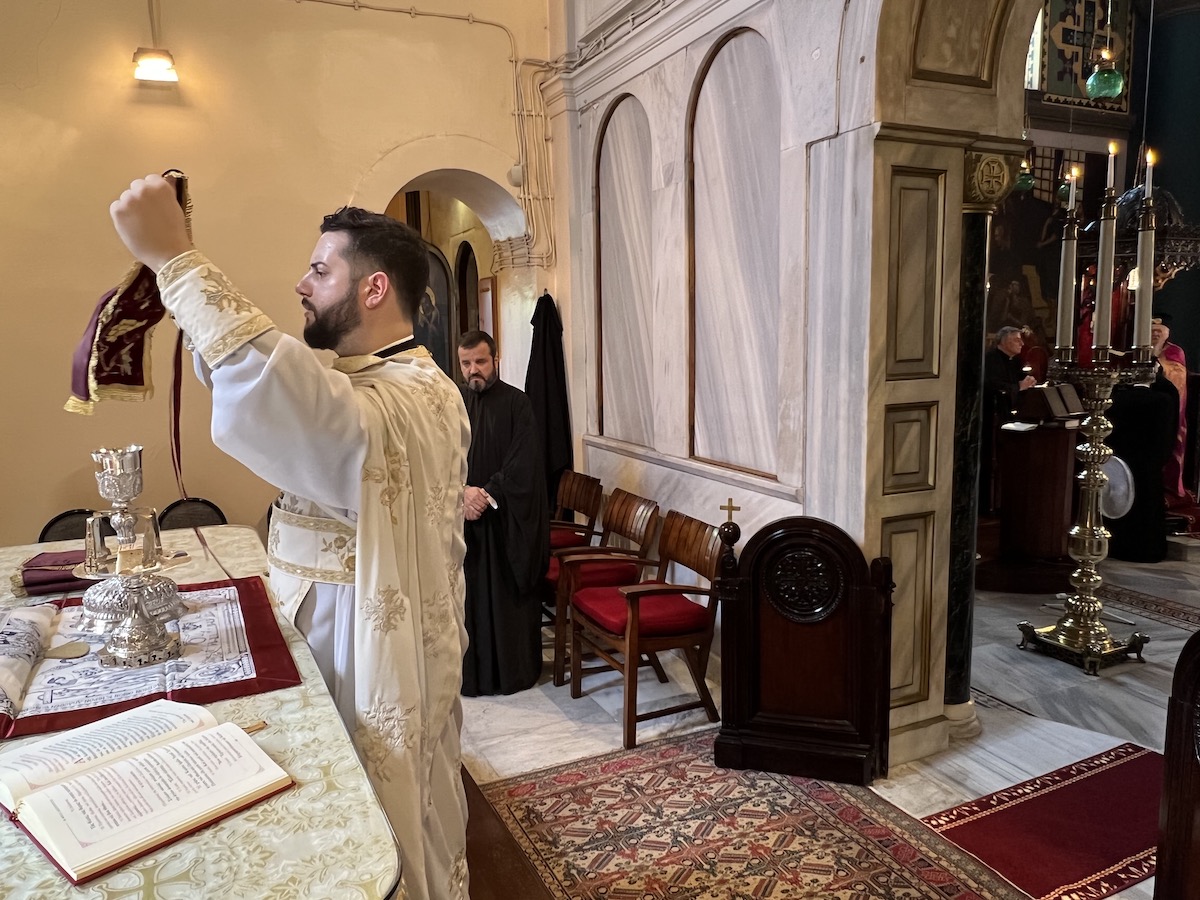 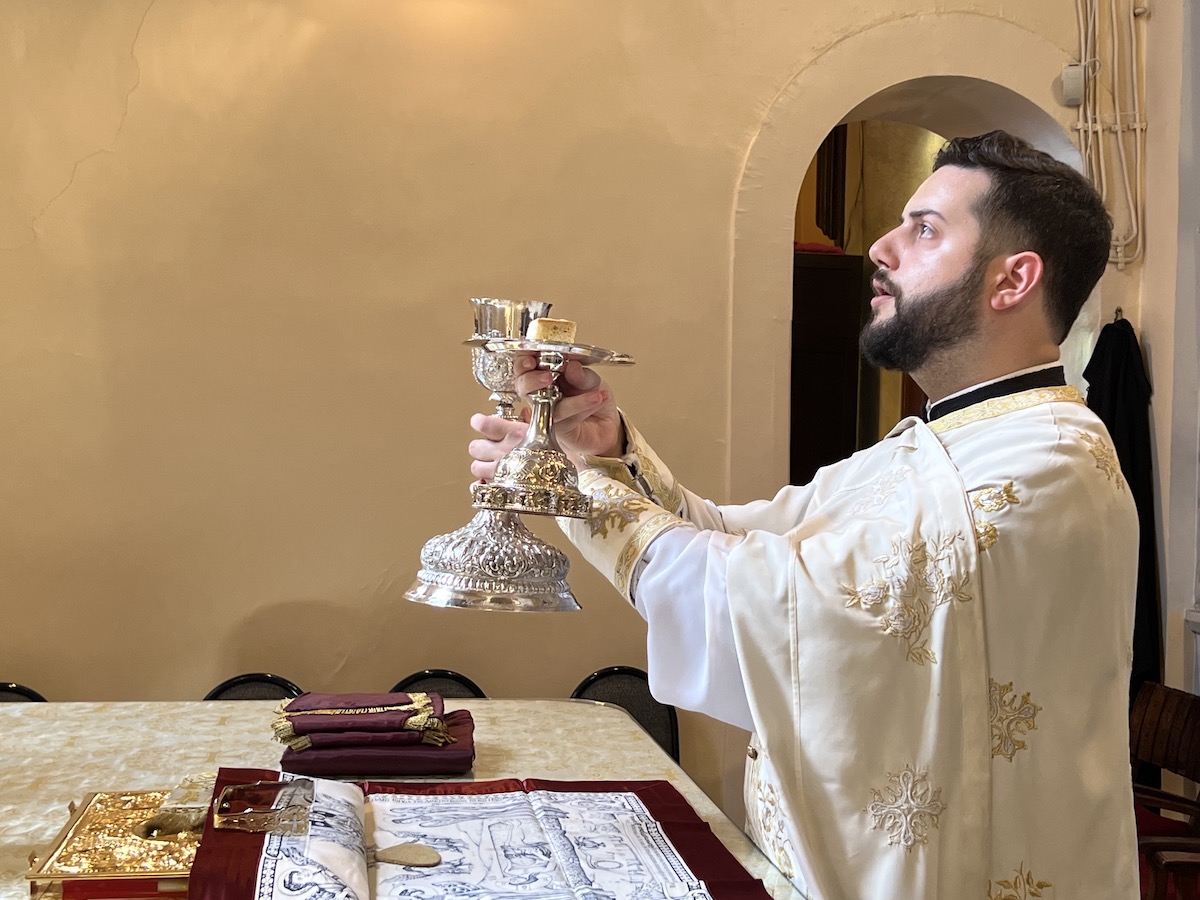 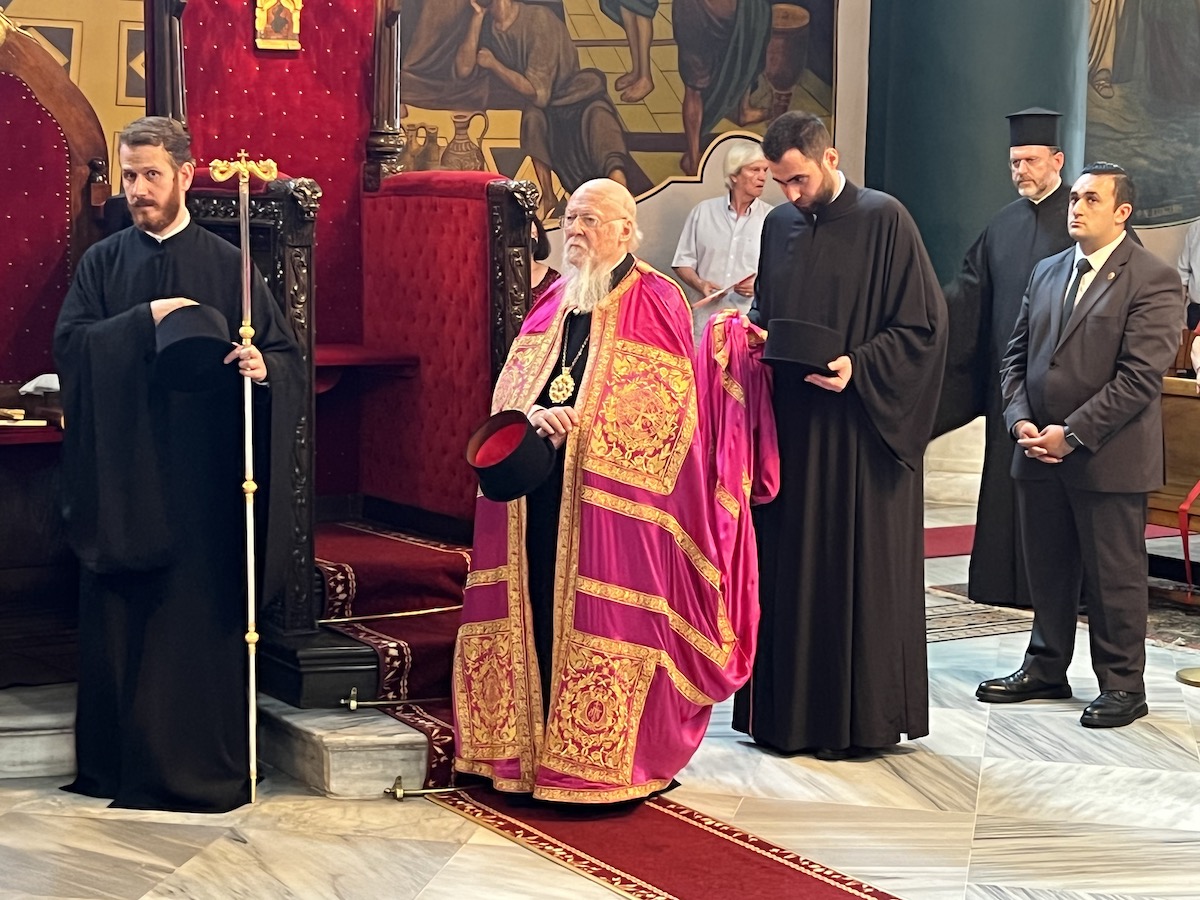 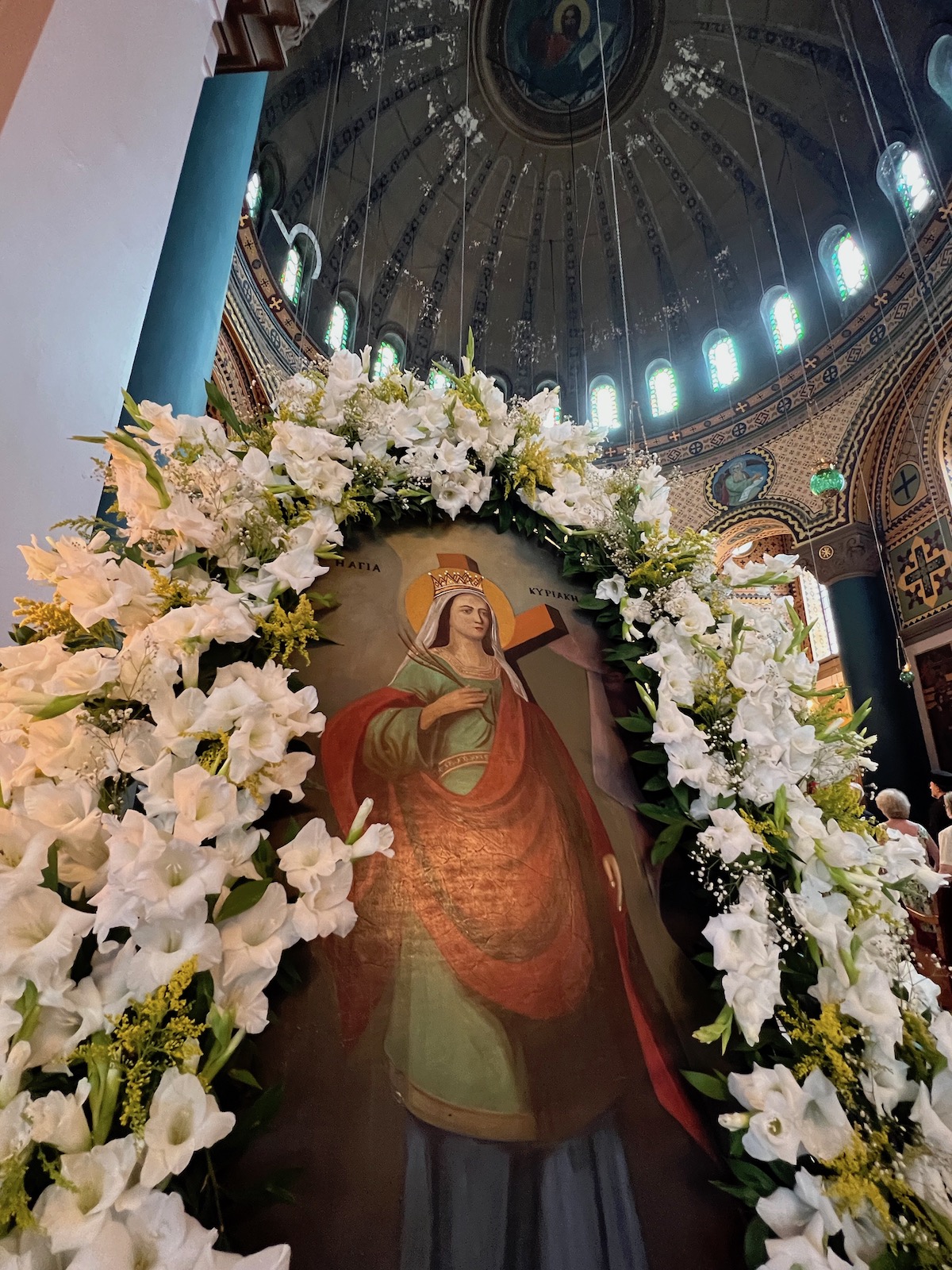 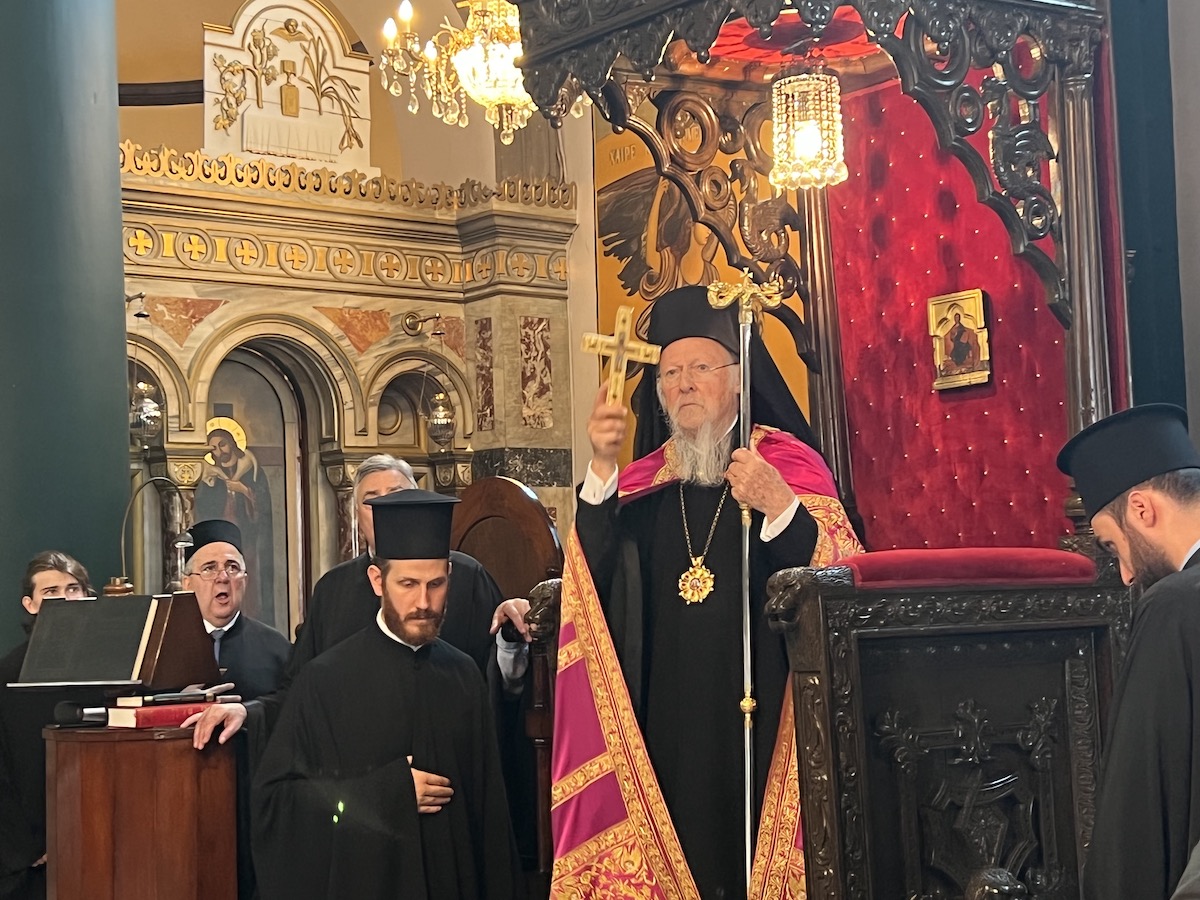 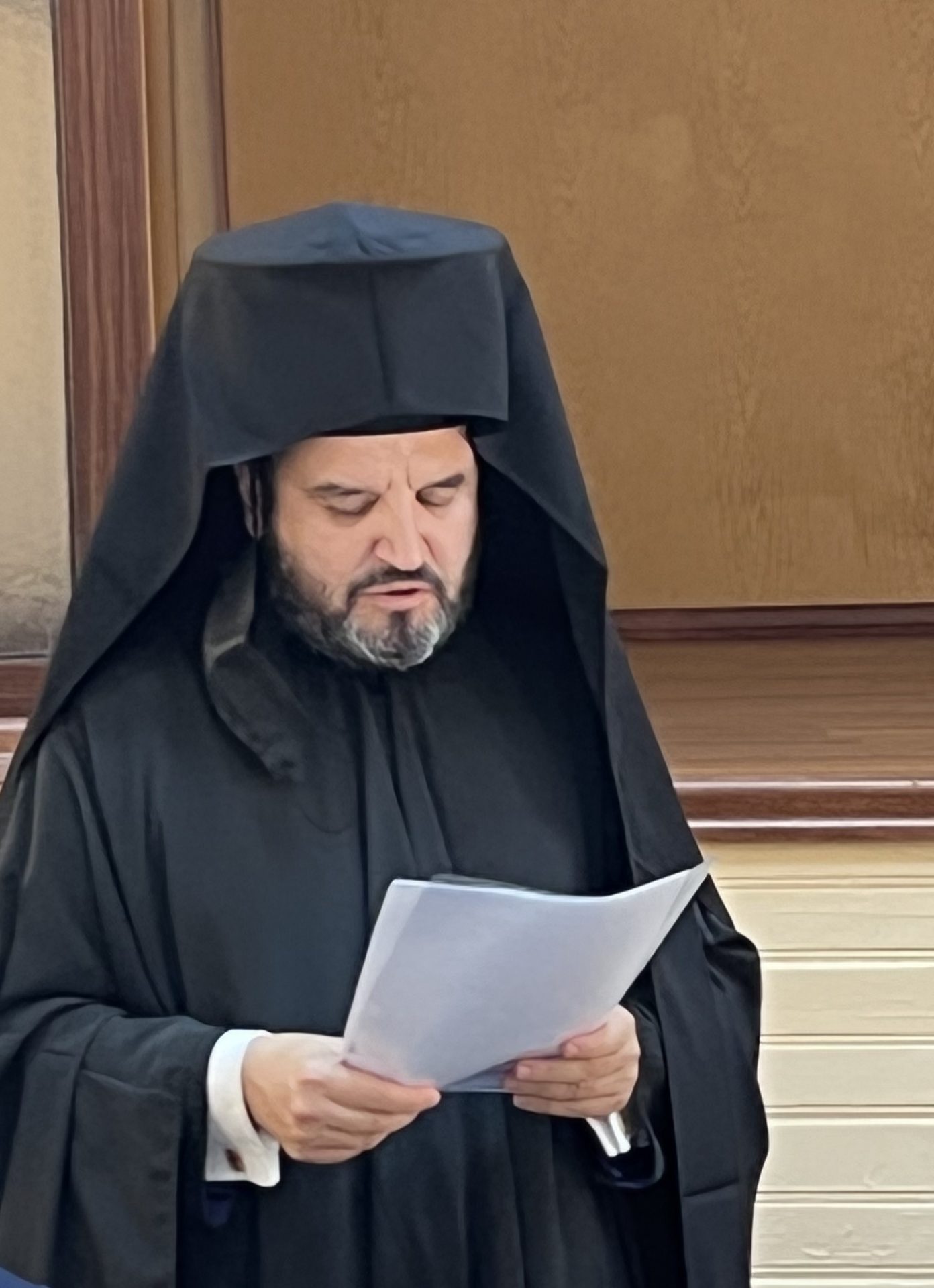 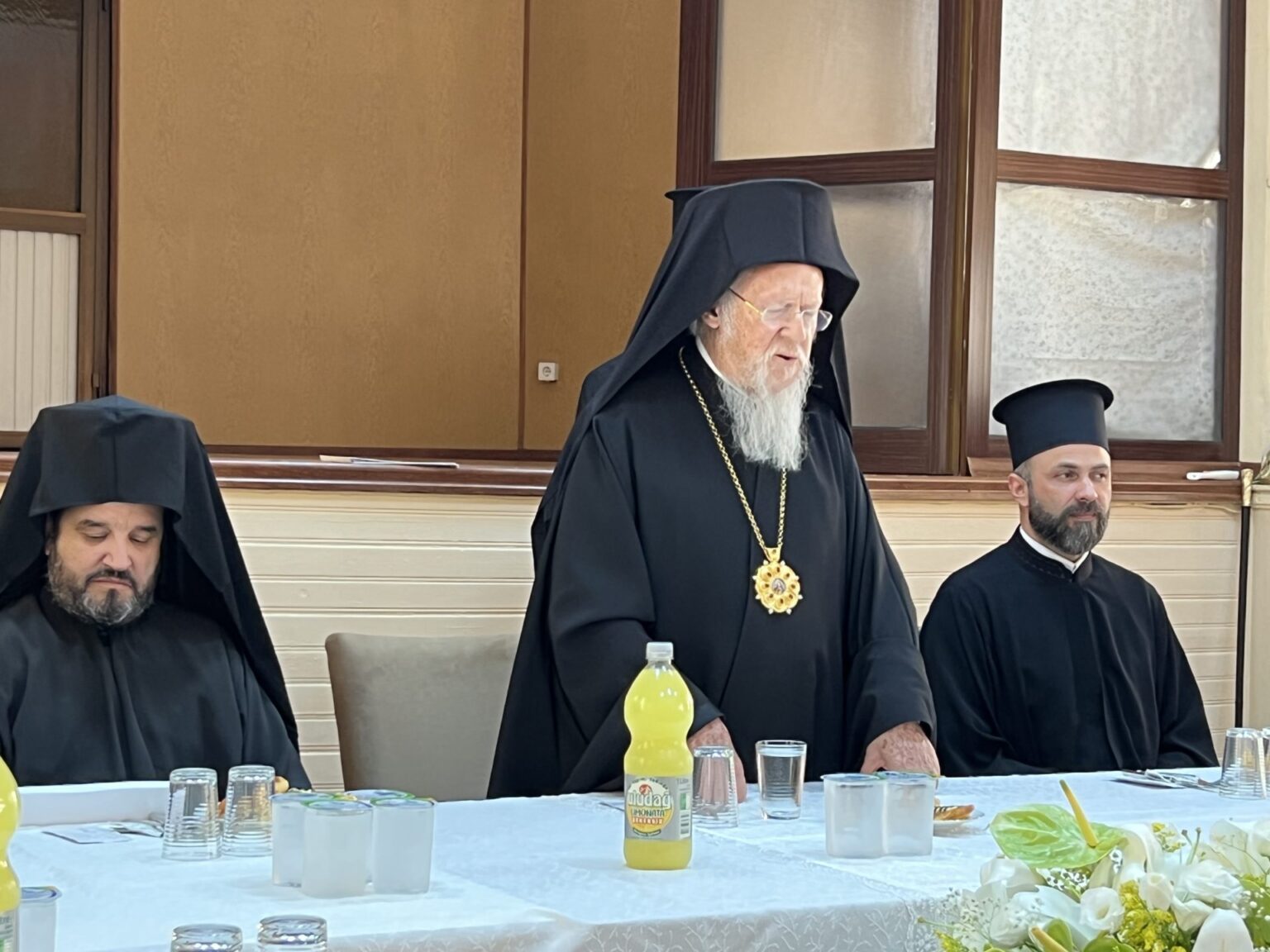 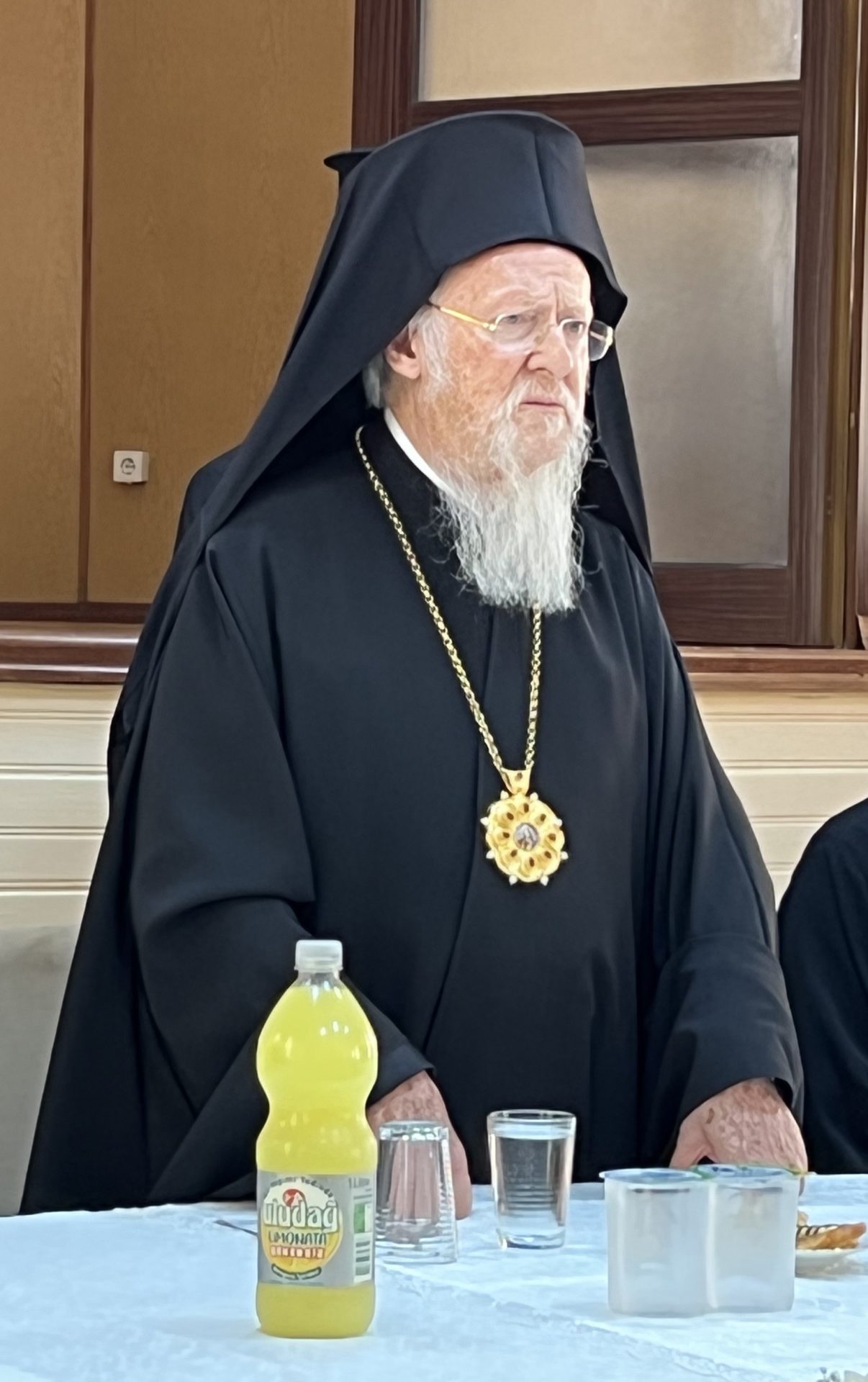 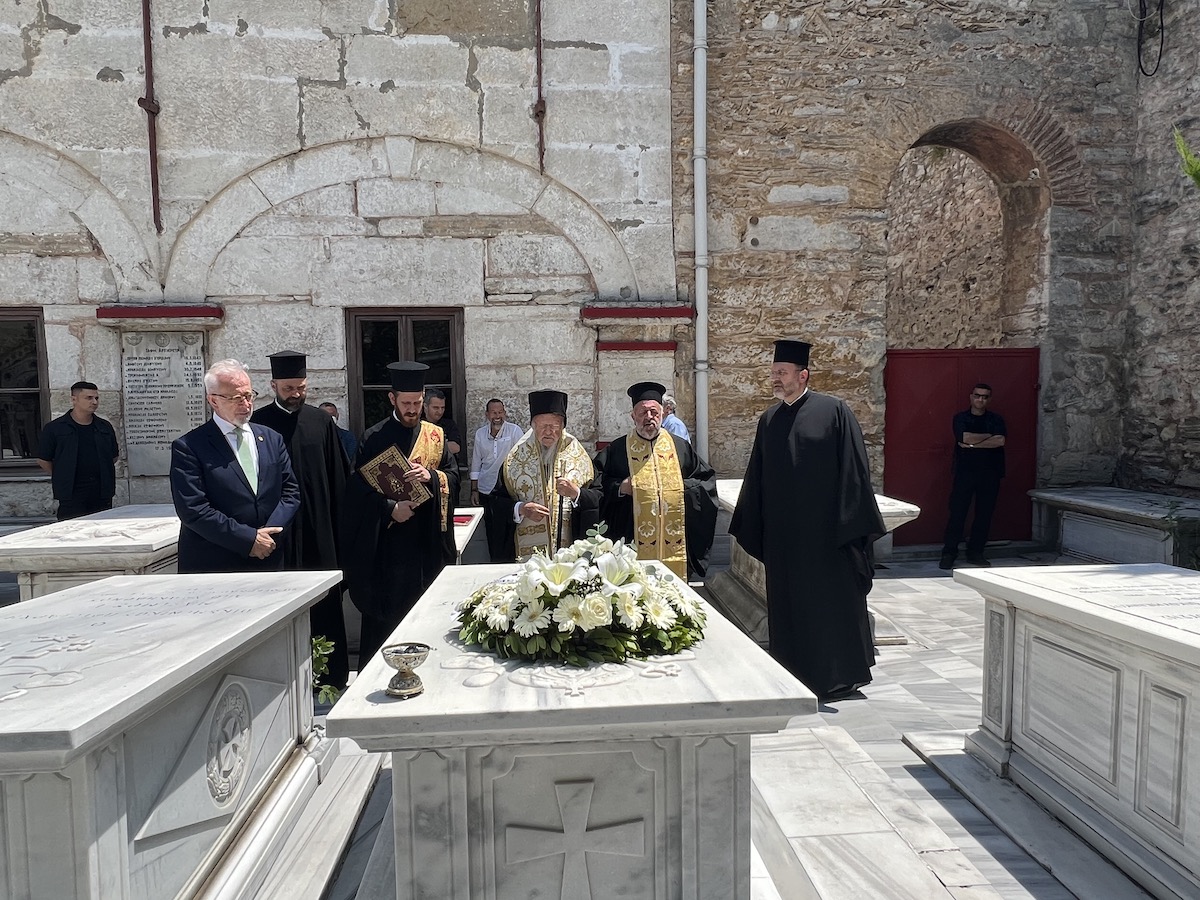 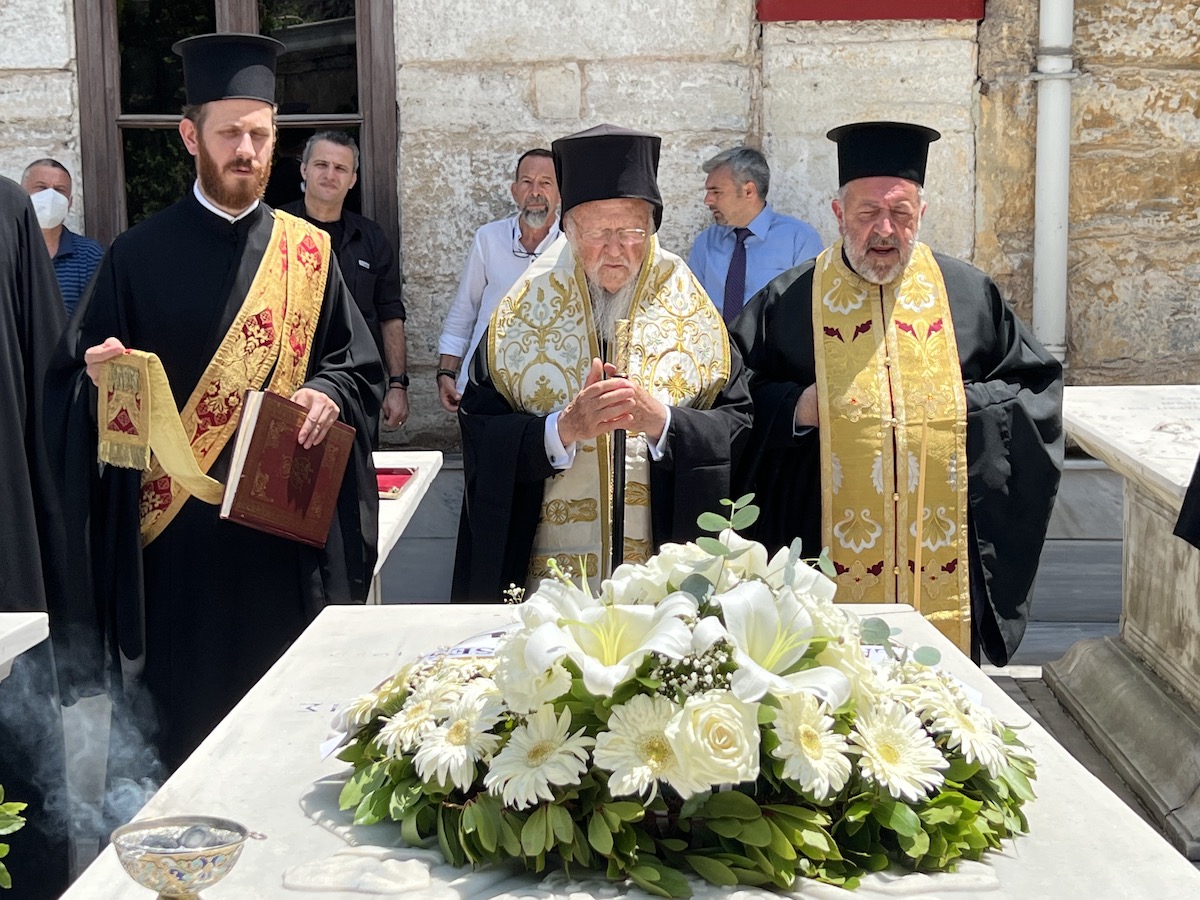 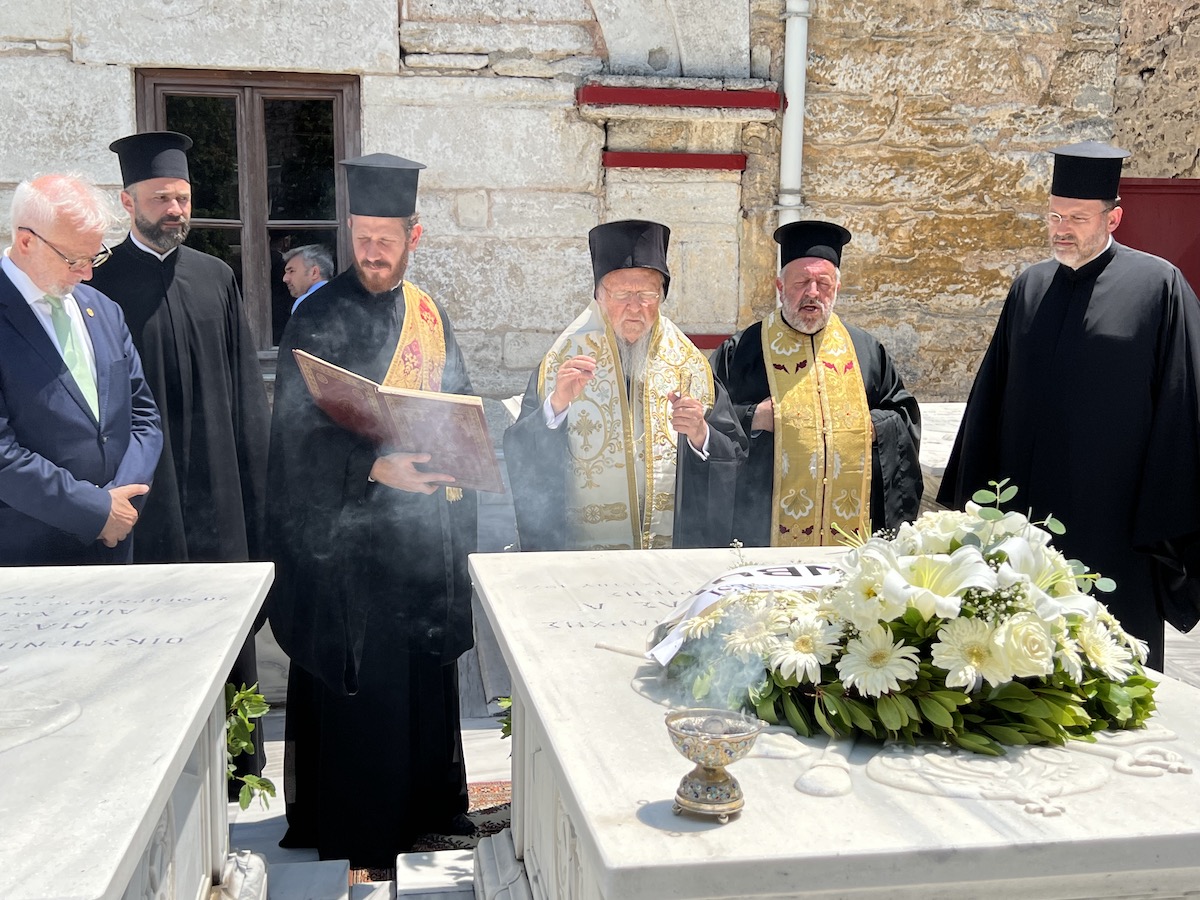 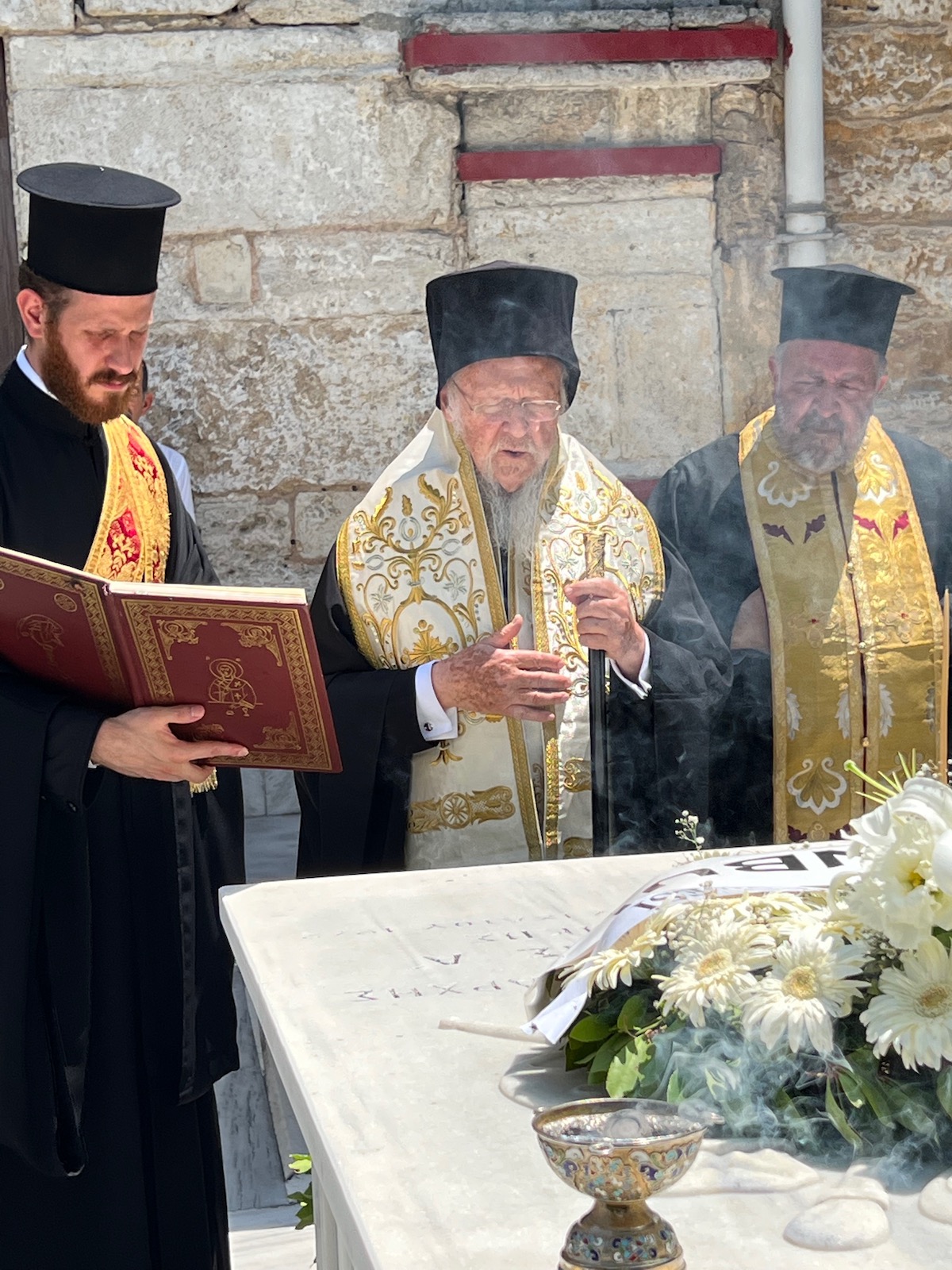 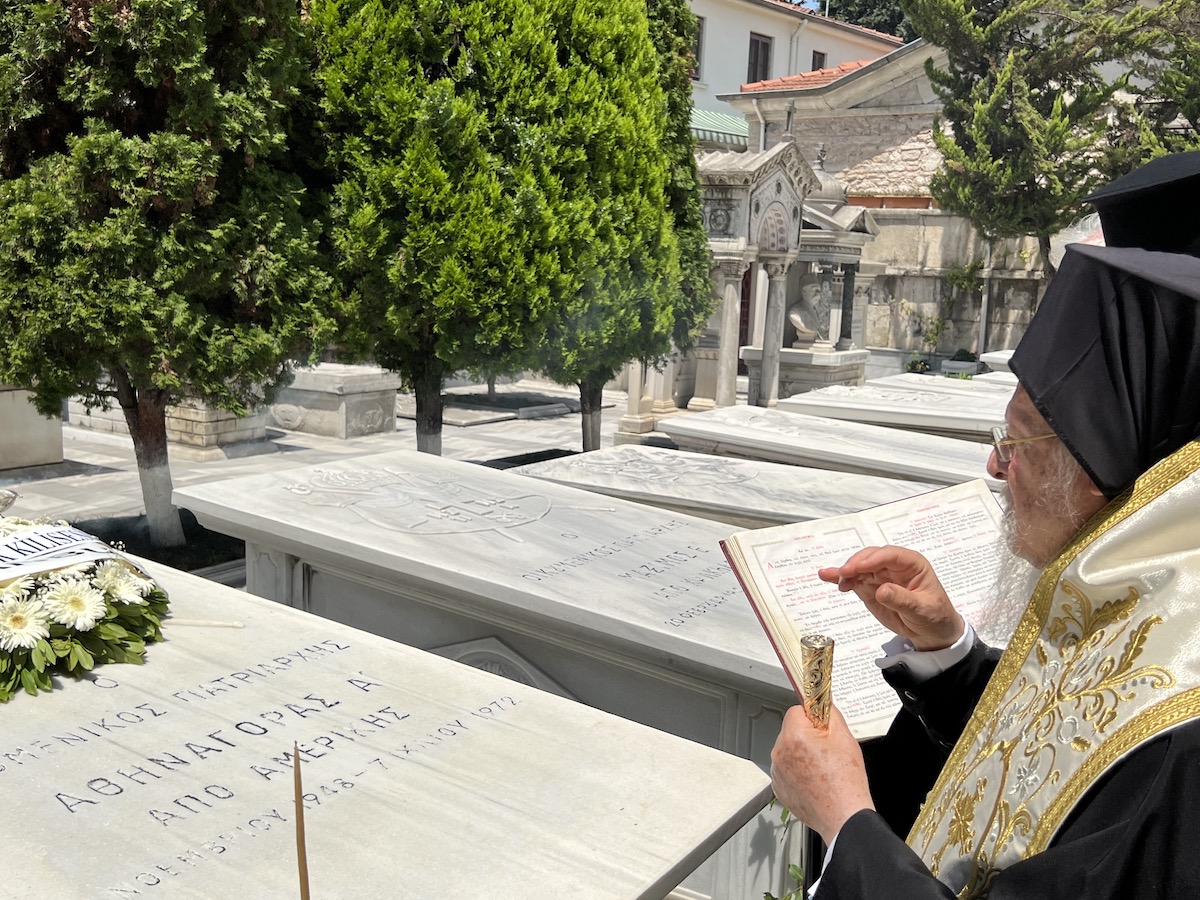