On Wednesday, November 16, 2022, the Patriarchate of Jerusalem celebrated the feast of the glorious great martyr George the Trophy-bearer in Lydda, at his holy church and tomb.

On this day, the Church does not celebrate the memory of his martyrdom, which took place in Rome under Diocletian, but the memory of the repatriation, that is, the transfer of his relics from Rome to Lydda, his mother’s hometown, in accordance with his command to his servant before his martyrdom.

The holy relic was indeed brought back and buried in Lydda. When in the meantime piety shone forth, Saint Helen built a temple around the Saint’s tomb and its consecration took place. Today, on the 3rd of November, the Church celebrates the feast of the transfer of the relics and the consecration of the Church in Lydda, while his martyrdom is celebrated on the 23rd of April.

Patriarch Theophilos addressed this congregation before the Holy Communion with the following Sermon:

“O send out thy light and thy truth: let them lead me; let them bring me unto thy holy hill, and to thy tabernacles” (Psalm 43:3) the psalmist proclaims.

The joyful feast commemorating the consecration of this magnificent Church dedicated to Saint George the Great Martyr in your biblical town of Lydda has gathered us all to glorify in Eucharist the Holy God, Who has glorified His Great Martyr.

Having been brought up with the moral virtues and principles of the Christian faith by his pious parents, his Cappadocian father and Palestinian mother, George “became shrewd and brilliant in wars” according to his biographer. For this reason, he was promoted to the highest bodies of the Roman army by the emperor Diocletian.

Inspired by David’s words “send out thy light and thy truth”, as well as of those of the Lord, “fear not them which kill the body, but are not able to kill the soul: but rather fear him which is able to destroy both soul and body in hell” (Matt. 10:28), Christ’s friend George, presented himself before Diocletian and preached boldly the mystery of the divine reverence, saying that Christ is God and the Son of God. This confession of the Christian faith was sealed by his martyr’s death.

And his martyr’s death made George known worldwide, where myriads of people honorary bear his name, while a multitude of Churches has been dedicated to him. Among those Churches, the present one is distinguished, in your historical town of Lydda, which was constructed by the God-crowned and great King Constantine, and where the Saint’s relics have been transferred and buried.

This God-pleasing event of the consecration of Saint George’s Church and the deposition of his holy relics we celebrated festively today. It is noteworthy that the consecration of a house of worship of God refers to Christ’s renewal of the old man, which is done by the gift of the Holy Spirit in the sacrament of baptism, as Saint Paul preaches: “Know ye not that ye are the temple of God, and that the Spirit of God dwelleth in you? If any man defiles the temple of God, him shall God destroy; for the temple of God is holy, which temple ye are” (1 Cor. 3:16-17). And “What? know ye not that your body is the temple of the Holy Ghost which is in you, which ye have of God, and ye are not your own?” (1 Cor. 6:19). “Be renewed and discarding the old man, live in newness of life” Saint Gregory the Theologian says.

This means, my dear brethren, that God, namely the Holy Spirit, does not dwell in hand-made temples, but in the human body, in the heart of man. Let us hear the Evangelist Luke saying in the Acts of the Apostles, “But Solomon built him a house. Howbeit the most High dwelleth not in temples made with hands; as saith the prophet, Heaven is my throne, and earth is my footstool: what house will ye build me? saith the Lord: or what is the place of my rest? Hath not my hand made all these things?” (Acts 7:47-50).

Moreover, in his Epistle to the Ephesians, Saint Paul prays that Christ may dwell in their hearts through prayer. “For this cause, I bow my knees unto the Father of our Lord Jesus Christ… That he would grant you, according to the riches of his glory, to be strengthened with might by his Spirit in the inner man; That Christ may dwell in your hearts by faith” (Eph. 3:14-17).

The Holy Spirit, the Spirit of Christ is the One Who dwelt in George’s heart and illumined his mind and also renewed his inner man, according to the example of the King-prophet David who says: “Create in me a clean heart, O God; and renew a right spirit within me” (Psalm 51:10).

Having in him the fulness of faith and the Holy Spirit, the brave George did not hesitate in any way before the Roman Emperor Diocletian and his men to declare himself a Christian and suffer the martyr’s death for the truth of Christ. “For longing conquered nature, persuading the lover to pass through death to the Beloved, even Christ God, the Saviour of our souls” (Glory of praises) his hymnographer says.

Let us entreat George the trophy-bearer, whom we honour today in the consecration anniversary of the Church dedicated to him, that by his intercessions and those of the Ever-Virgin Mary the Mother of God, we may receive the renewal of the Holy Spirit in our hearts. Amen! Many happy returns!”

A reception followed and at noon a meal was hosted by the Hegoumen Archimandrite Markellos and the Council of the Community. 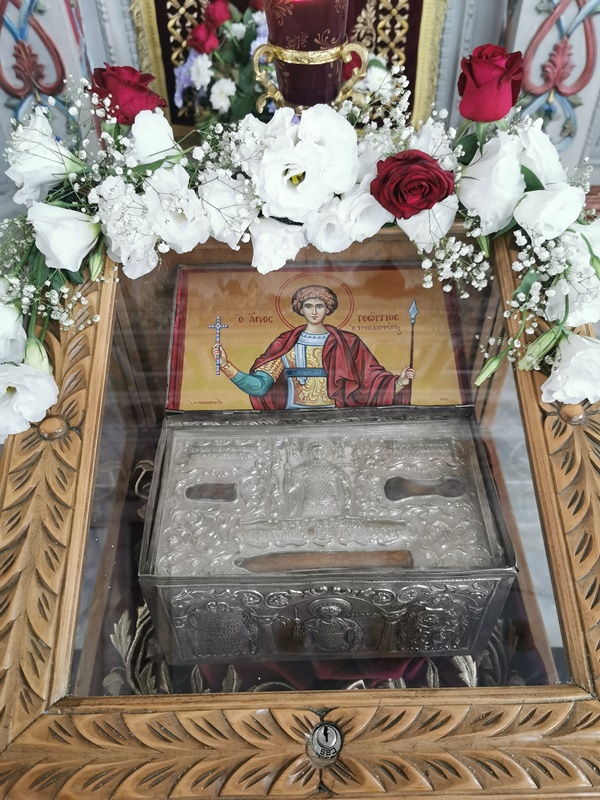 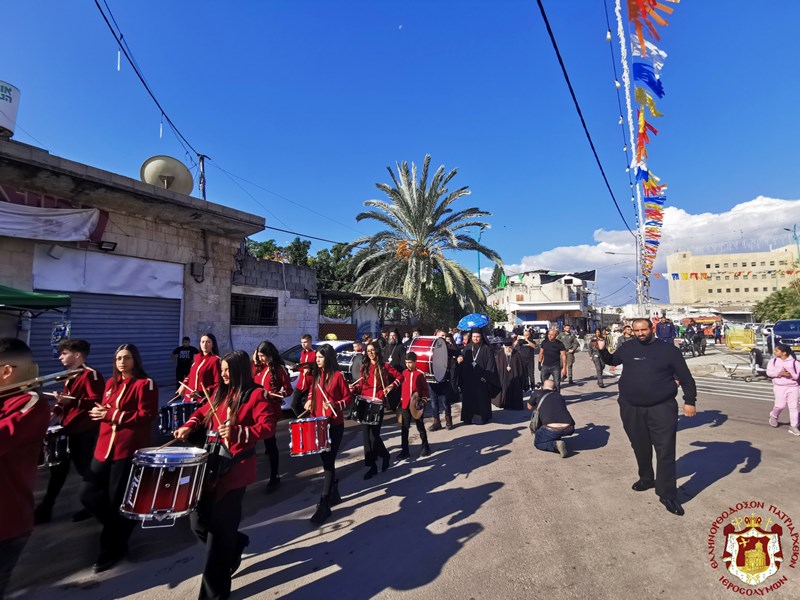 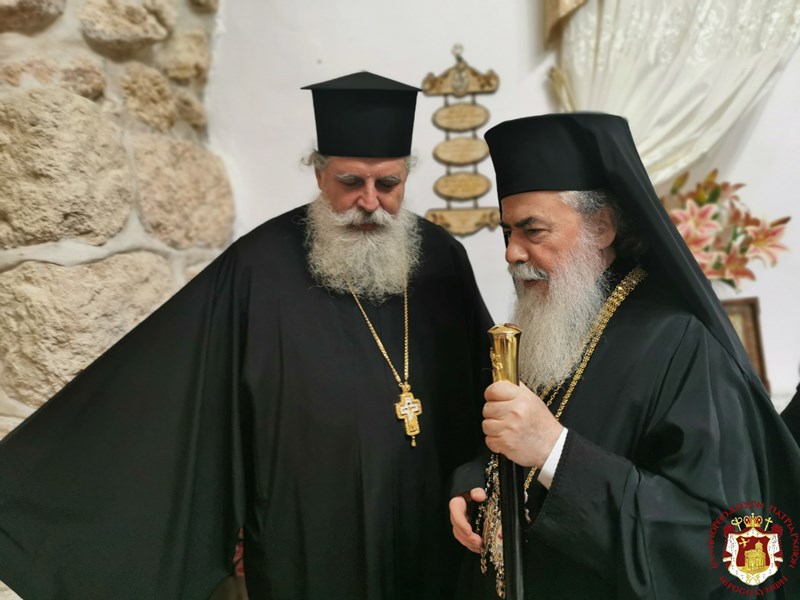 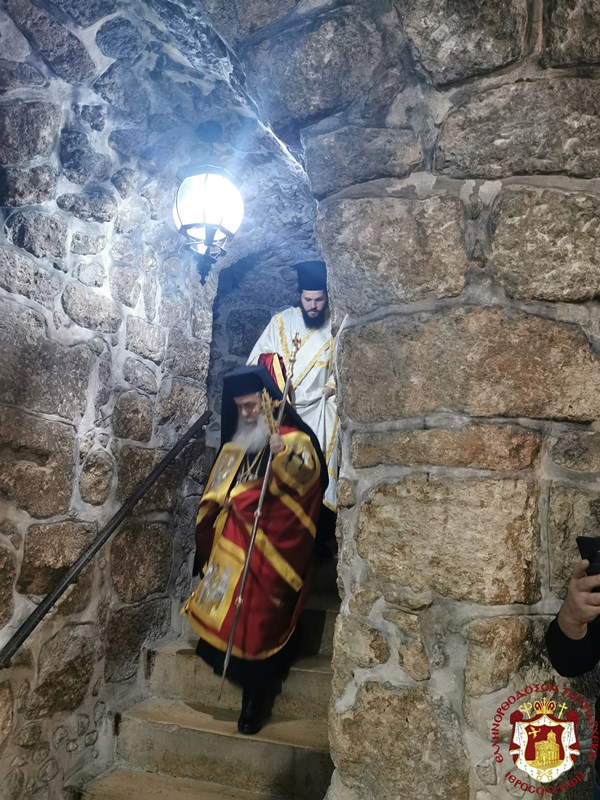 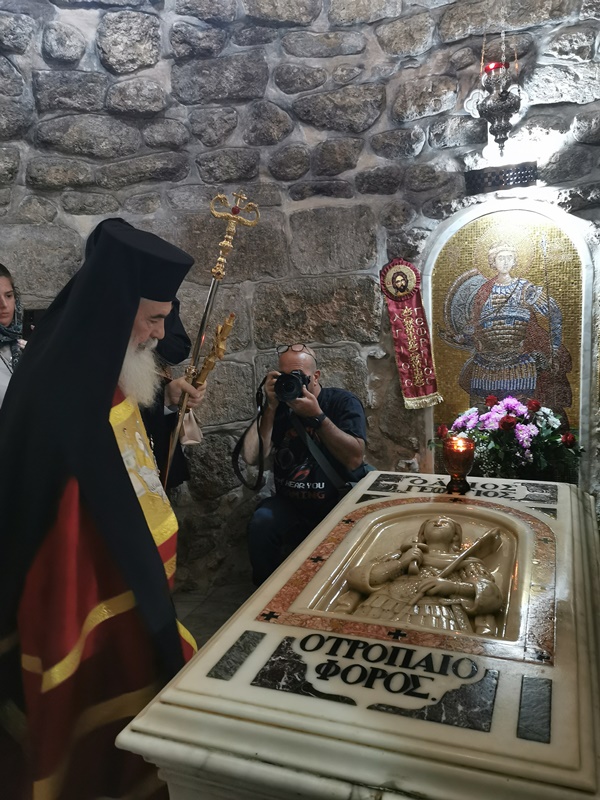 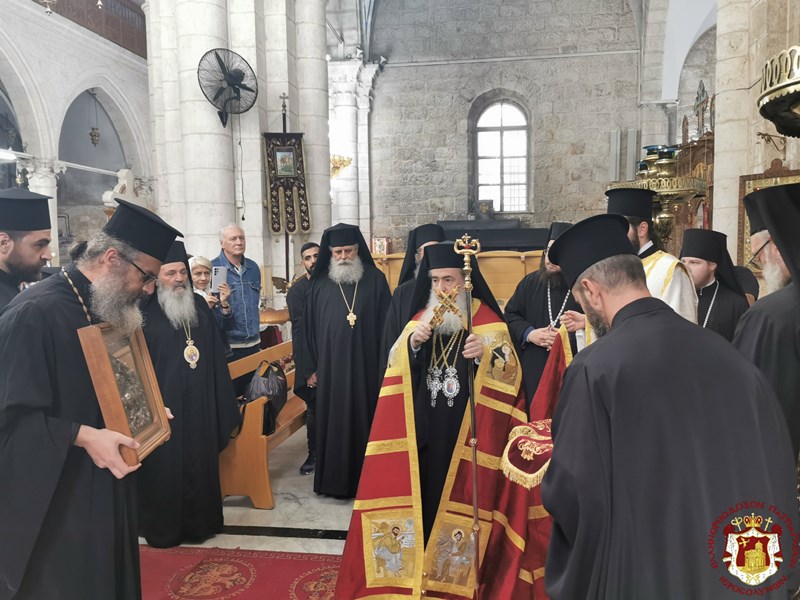 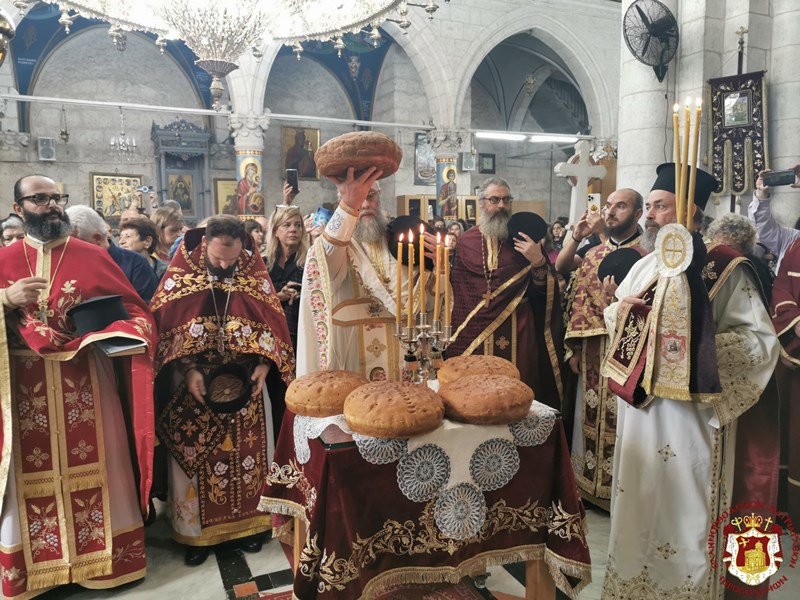 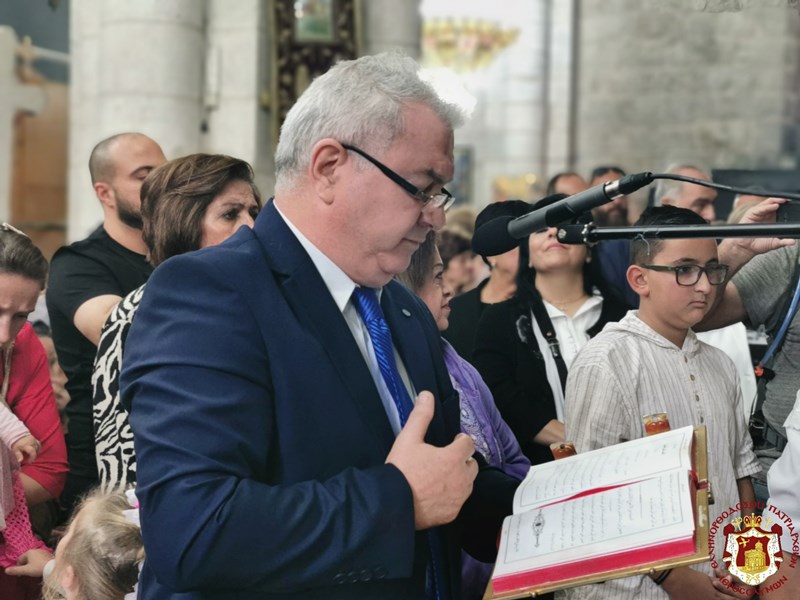 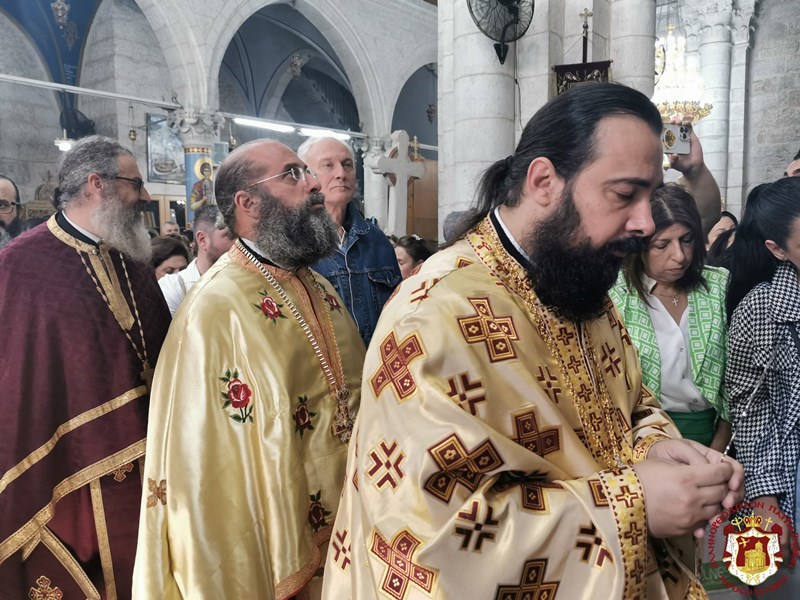 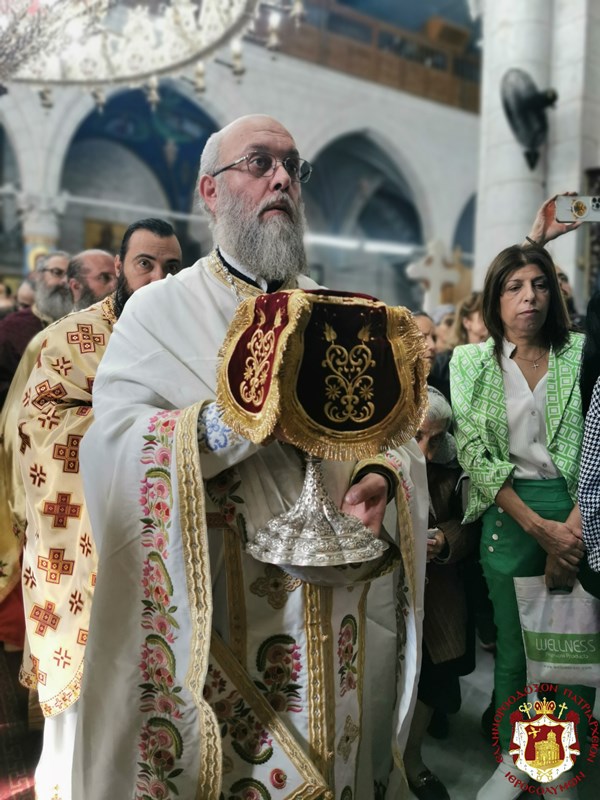 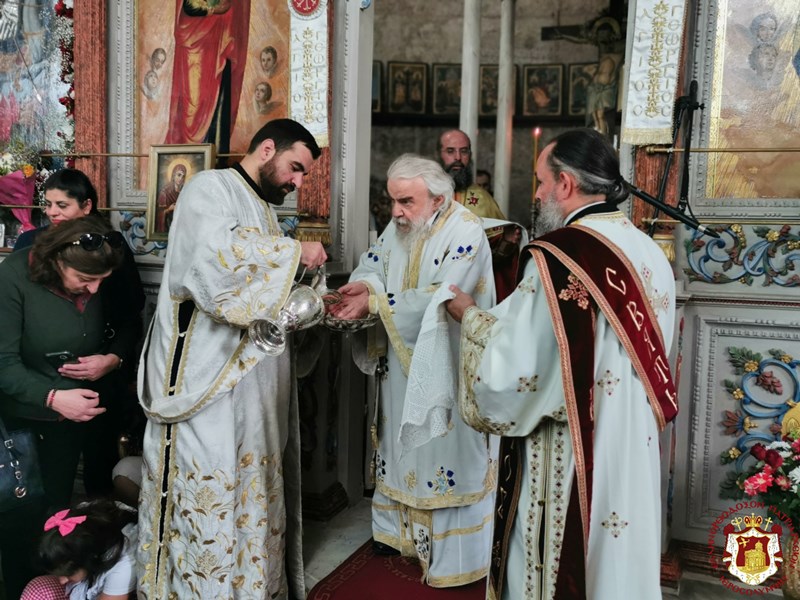 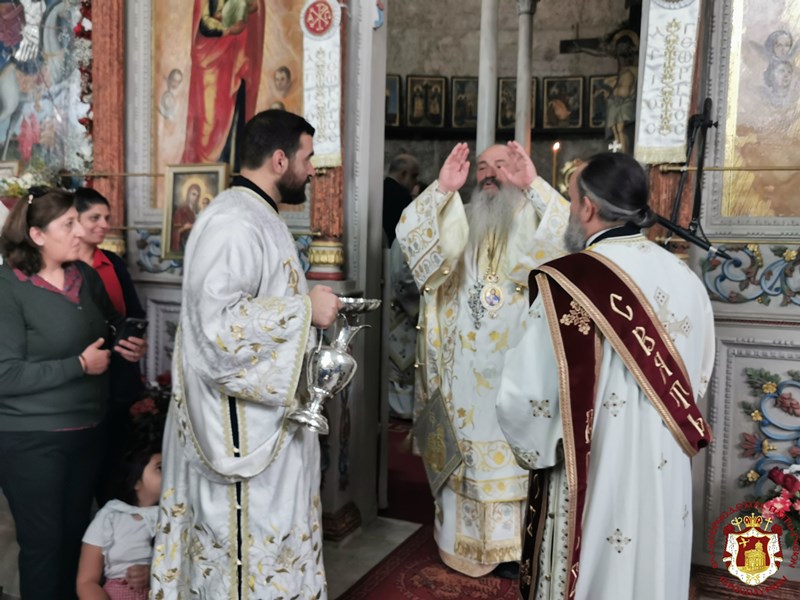 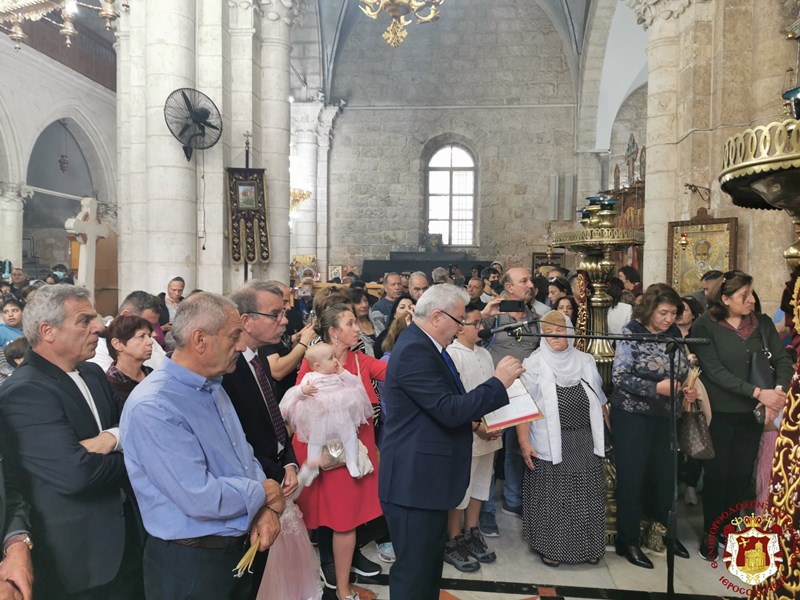 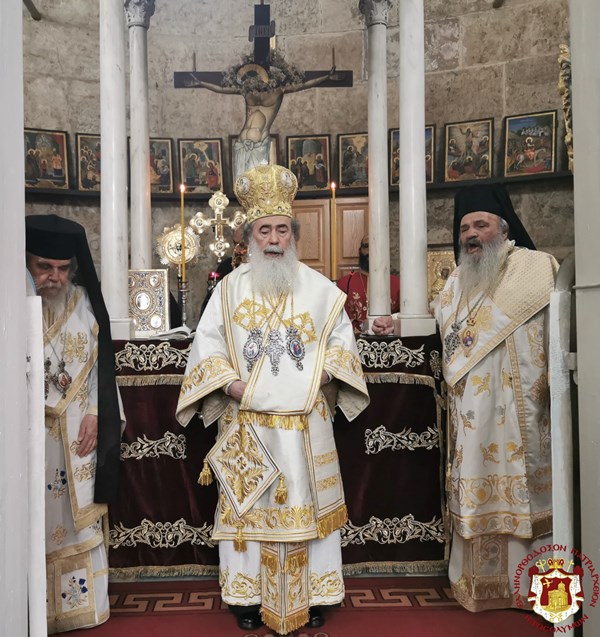 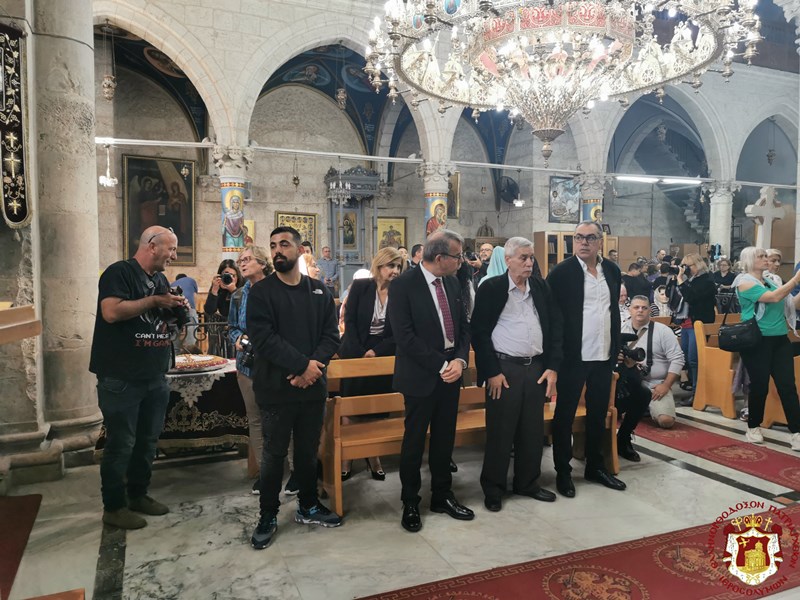 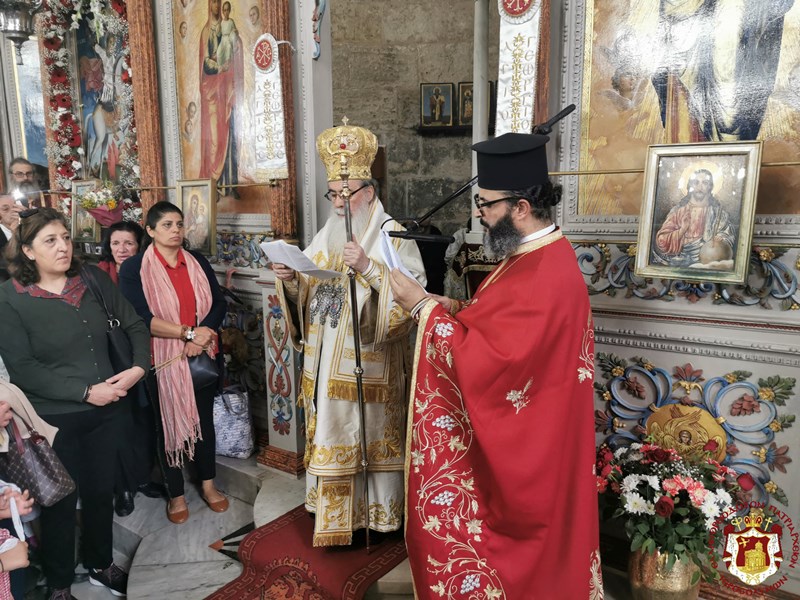 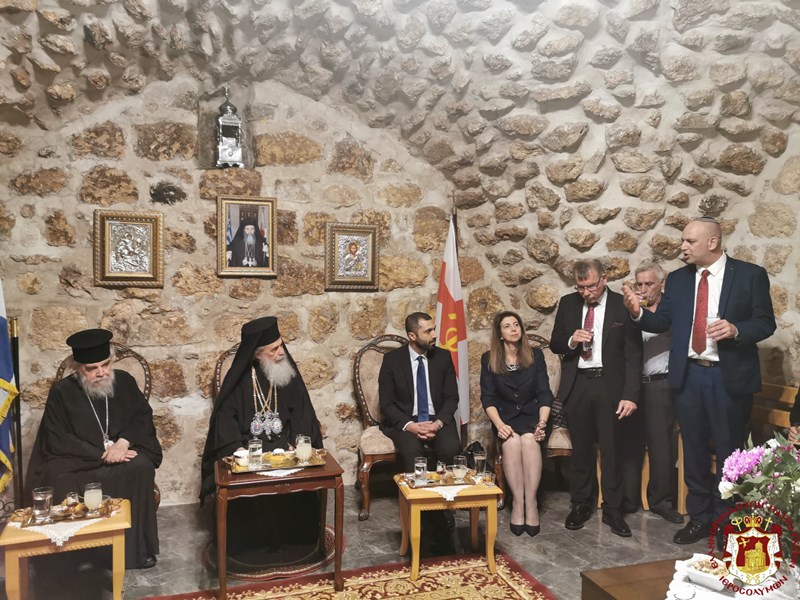 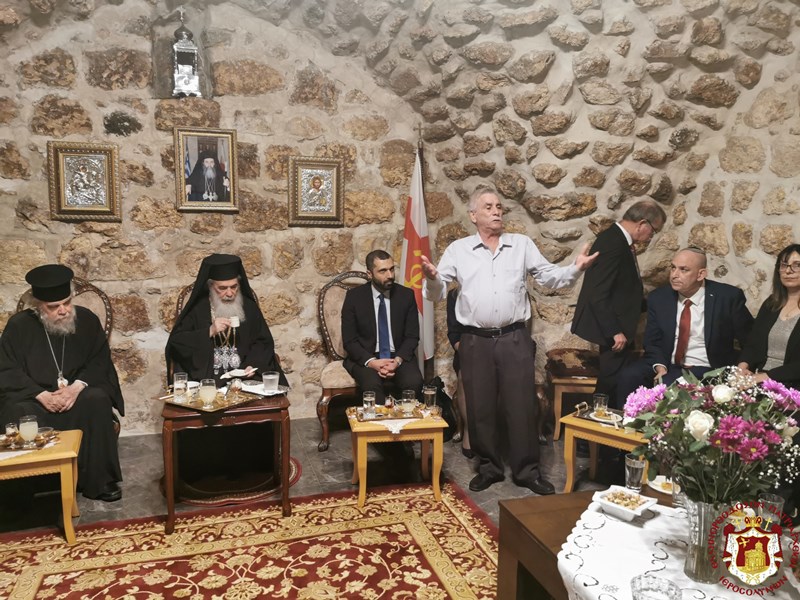 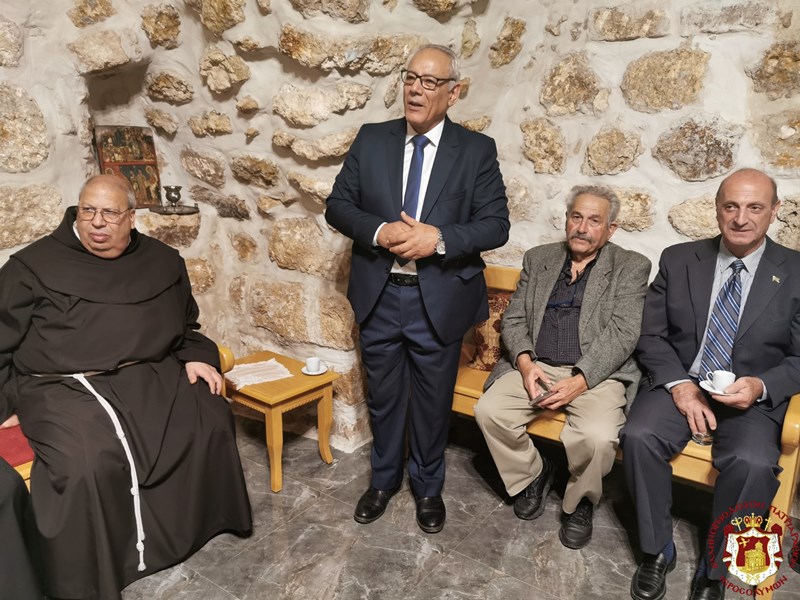 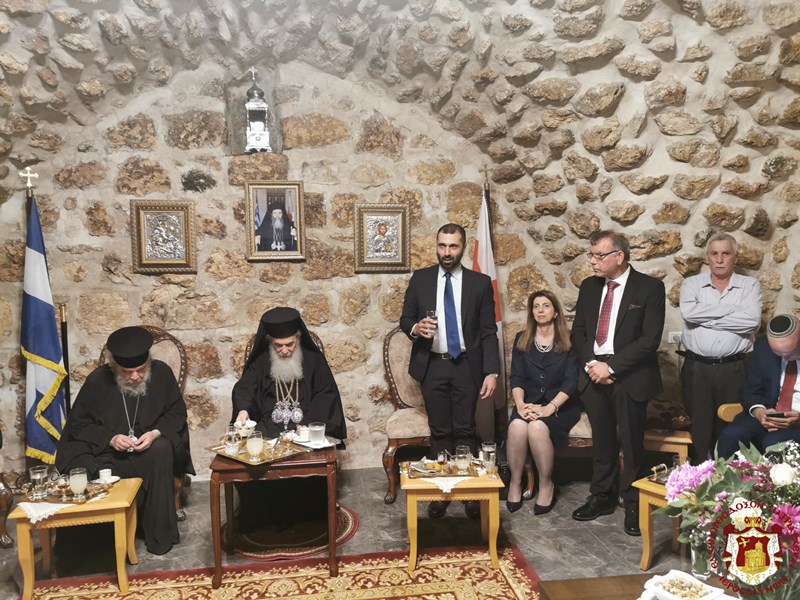