The Feast of Pascha at the Patriarchate of Jerusalem

The glorious exit from the dead and the Resurrection of our Lord and Saviour Jesus Christ was celebrated by the Patriarchate on Easter Sunday, May 2, 2021.

On this Feast, the Church, being grateful, luminous, and rendering glory to God, commemorates that our Incarnate Lord Jesus Christ went down to Hades from the Cross and was risen from the dead; He liberated the long-ago departed from the power of the devil and redeemed them and Paradise.

The Church of Jerusalem celebrated this Feast at the Life-giving and empty Tomb according to the Status Quo.

The Service began with the Canon of Holy Saturday, until the officiator the Feast, His Beatitude our Father and Patriarch of Jerusalem Theophilos and the Archbishops put on their Paschal liturgical vestments.

Then the Patriarchal Entourage exited the Catholicon and marched on a Procession three times around the Sacred Edicule, before the Matins Gospel narrative on the Resurrection was read: “When the Sabbath was over…” (Mark 16:1-8), then the “Glory to the Holy and Consubstantial and Undivided Trinity” followed by the chanting of “Christ is risen” by the whole congregation, and the exclamations of this in various languages, along with the verses, ten times in total. The Canon “It is the Day of Resurrection” by Saint John Chrysostom began and the Easter Matins was completed.

Then the Divine Liturgy of Saint John Chrysostom was officiated by His Beatitude our Father and Patriarch of Jerusalem Theophilos at the Holy Sepulchre. Co-celebrants to His Beatitude were their Eminences; Metropolitan Isychios of Kapitolias, the Archbishops; Theophanes of Gerassa, Aristarchos of Constantina, Methodios of Tabor, Theodosios of Sabastia, Philoumenos of Pella, and Metropolitan Joachim of Helenoupolis, Hieromonks, Archdeacon Mark, and other Deacons.

The chanting was delivered by Hierodeacon Simeon and Vasilios Gotsopoulos with the Patriarchal School Students, while all people were crying out loud “Christ is risen!” The Service was attended by the Consul General of Greece in Jerusalem Evangelos Vlioras.

Before the end of the Service, the Sermon by Saint John Chrysostom was read and the Dismissal concluded with “Christ is risen”.

Finally, the Patriarchal Entourage returned to the Epitropikon of the Central Monastery, bells tolling, to receive cheese and easter eggs. 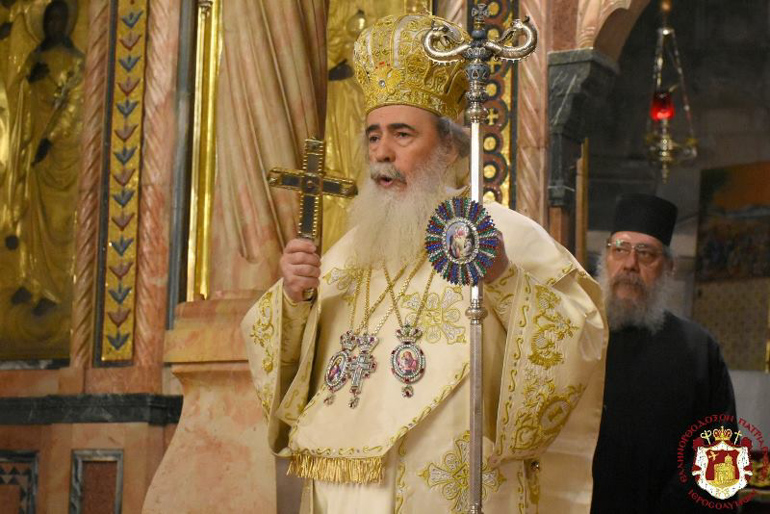 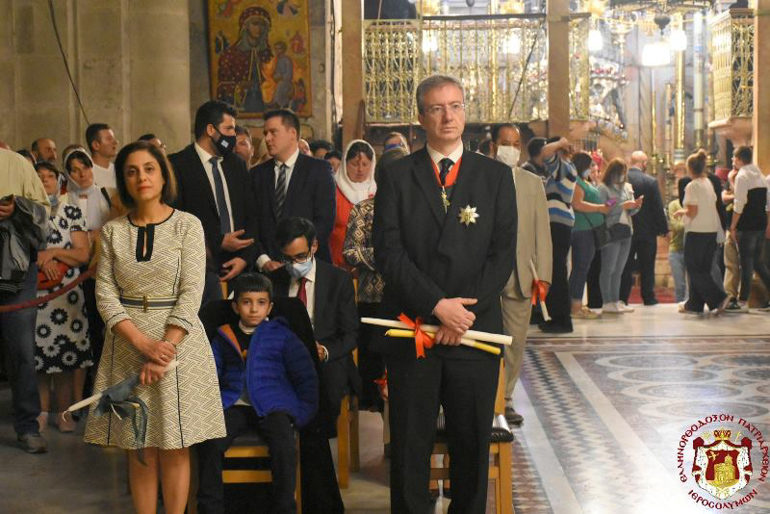 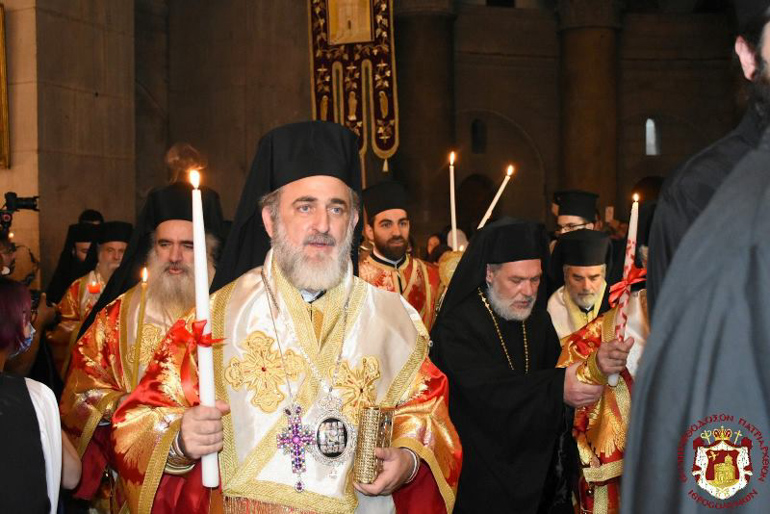 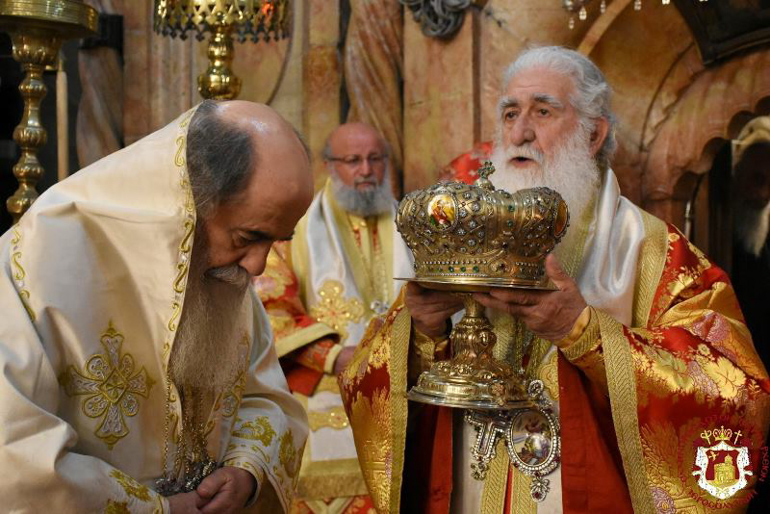 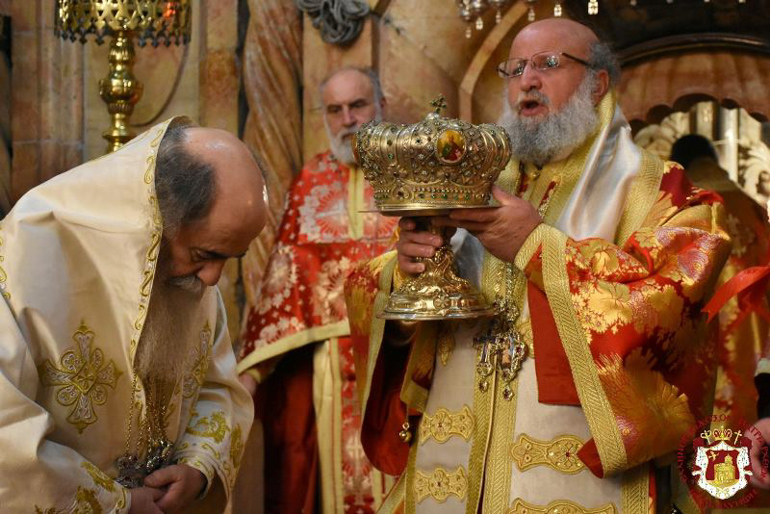 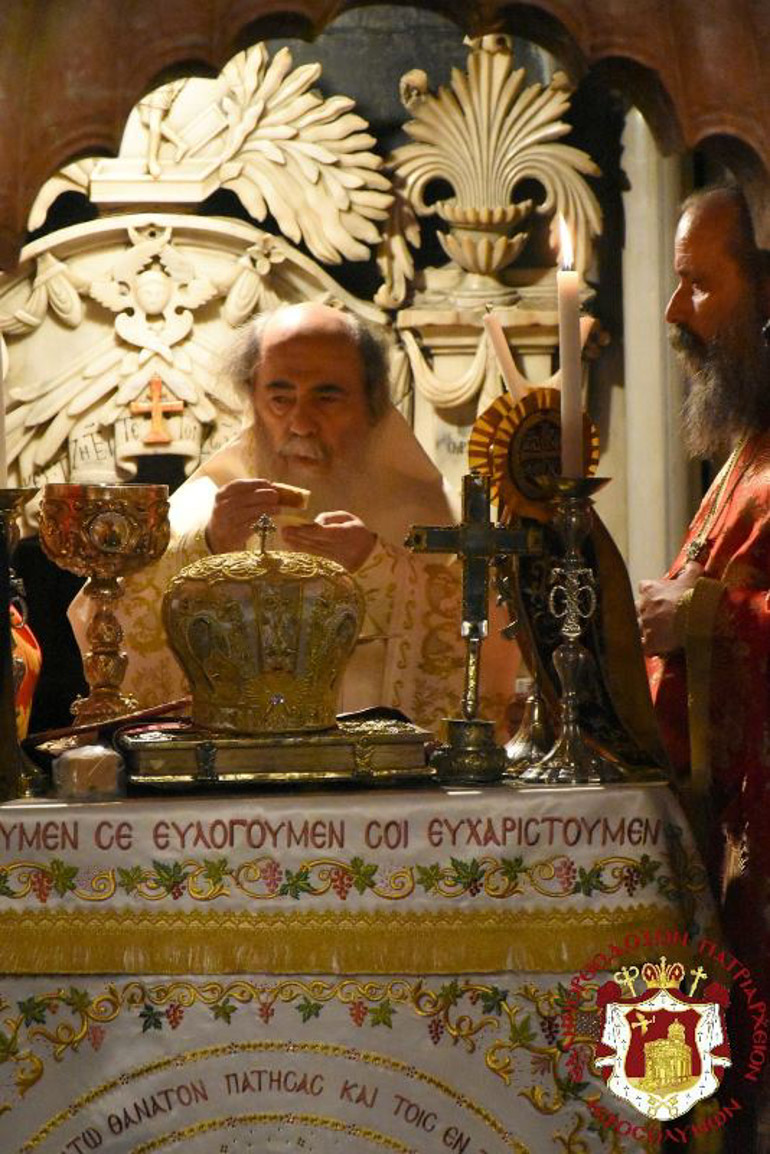 Feast of Saint George was celebrated solemnly by Patriarchate of Jerusalem

Liturgy in Jericho for Saint Zacchaeus the Publican

Holy Week and Easter in Qatar

Easter visits of the Western Churches at the Patriarchate of Jerusalem

Easter Service at the Holy Archangels Michael and Gabriel in Brussels