Omogeneia welcomed the Patriarch of Alexandria to Brooklyn’s Cathedral of Sts. Constantine and Helen

On Saturday, October 8, 2022, the Cathedral of Saints Constantine & Helen in Brooklyn hosted a breakfast in honor of Patriarch Theodore of Alexandria, welcoming Omogeneia leaders and members of the press for the celebration.

Patriarch Theodore was accompanied by Archbishop Elpidophoros of America, Metropolitans George of Guinea and Nikodimos of Memphis, Sub-Deacon Moses Kariuki Maina, his sister Argyro Mahlas and his nephew Michael Mahlas.

As Patriarch Theodore entered the Cathedral, the melodic voices of students from the parish’s A. Fantis School greeted him with a special hymn. After an introduction and brief history of the Cathedral from the Proistamenos, Rev. Protopresbyter of the Ecumenical Throne Evagoras Constantinides, His Beatitude shared that when he was a young boy in Crete, a priest from Brooklyn was ordained on the island, and, finding himself in the borough for the first time that morning, the Patriarch could not help remembering him, remarking that “life is a circle.” Patriarch Theodore thanked the students for their warm and loving welcome, wishing them well in the year ahead and inviting them all to come and visit Egypt for themselves.

Patriarch Theodore presented Fr. Constantinides with a blessing cross crafted in Cairo and a book of St. Mark’s Divine Liturgy, which, he explained to the students, he uses every year when he officiates the liturgy by the Nile River. Each child then had the opportunity to receive an individual blessing with the cross from the Patriarch.

Afterwards, attendees enjoyed a breakfast prepared by community members. Archimandrite Chrysostom Onyekakeyah— who had previously served in the Alexandrian Patriarchate and had the opportunity to personally present the Patriarch with a copy of his book Orthodoxy in Africa— offered remarks, and was followed by Consul General of Greece in New York Konstantinos Konstantinou and Consul General of Cyprus in New York Michalis Firillas, as well as leaders from the Cathedral’s parish and school. Before the conclusion of the meal, Archbishop Elpidophoros announced plans in progress for an official GOARCH pilgrimage to Alexandria in 2023, during which all would have the opportunity to meet with the Patriarch again in Egypt. 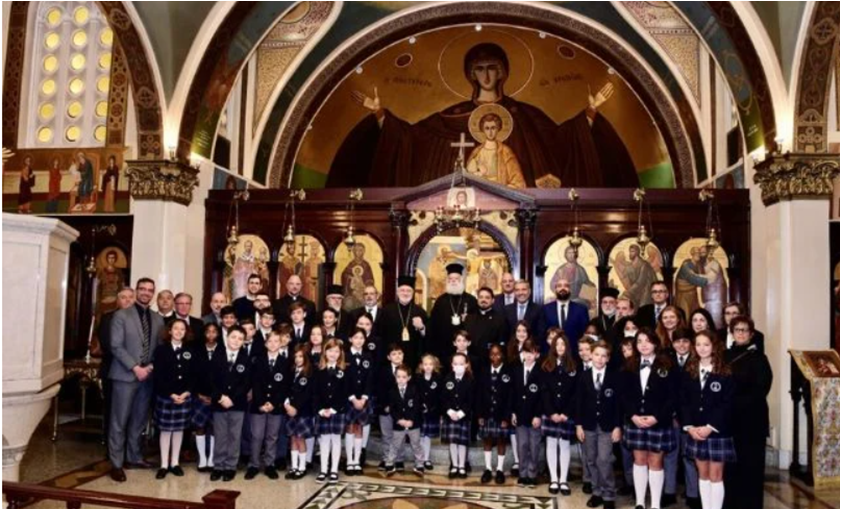 Elpidophoros: The lack of recognition of Epifaniy continues to be source of conflict and disagreement (VIDEO)