The plan of the leaders of the Russian Orthodox Church, who had been putting pressure on the Hierarchy of the Church of Greece, seems to have backfired, as it was shown with today’s decision of the extraordinary meeting of the Holy Synod which was concluded at noon.

During the meeting, more than 35 Metropolitans took the floor and talked about the fact that they had being put under pressure by leaders of the Russian Orthodox Church to which they did not yield.

“This kind of Russian attitude verifies that the political movement of Pan-slavism, once started by Stalin, is still active today, but this time by other means,” stressed Metropolitan of Langadas, Liti and Rentina. The Metropolitan of Peristeri said that the motives of the Russian Orthodox Church are indeed very opaque.

The Metropolitan of Patras, who was a member of the previous Standing Holy Synod, spoke of intimidation on the part of Moscow Patriarchate and shared a conversation he had with a Russian Archpriest, who visited him in order to accuse Ecumenical Patriarch Bartholomew of desire for authority “If you had attended the Council of Crete, none of this would have happened,” responded Metropolitan of Patras to the Russian delegate, who seemed to understand, even though he was sceptical at the beginning of the talks with the Ecumenical Patriarch.

“We have the opportunity today to free the hands of the other Patriarchates,” said Metropolitan Chrysostomos of Patras. He also told the Archbishop, “We would not have been in this position if you had immediately acknowledged Metropolitan Epiphanius of Kiev.”

Who does the Patriarch of Moscow think he is anyway?

Metropolitan of Corinth was rather upset when he shared his own experience on this issue. During his visit to Jerusalem, he witnessed the pressure that was being put on the Patriarchate of Jerusalem by the Russian Orthodox Church. So, Metropolitan Dionysios of Corinth wondered, “Who does Patriarch of Moscow think he is anyway? Does he think he is the Ecumenical Patriarch?” In addition, he talked about the continuous extension plans of the Russian Orthodox Church; “They cannot talk about canonicality, when they respect no rules and they buy off lands around the world to build churches.”

Thus, the Metropolitan of Maroneia called on the Hierarchy not to be afraid. “We have nothing to fear. We are all brave enough and we should not be afraid of anyone,” he said.

Will we reject the most sacred institution of the nation?

Metropolitan of Messinia warned the Hierarchy that the right of the Ecumenical Patriarchate to grant autocephaly should not be challenged. He said that as long as the Church of Greece did not recognize the Orthodox Church of Ukraine, the division within Ukraine would be intensified.

The Metropolitan of Hydra reminded the Hierarchy that, if we did not make the right decision in favour of the new Church, “we would commit the greatest crime.”

“We cannot succumb to the blackmail of Metropolitan of Volokolamsk,” the Metropolitan of Ioannina told the Hierarchy, citing more than 200 Russian jurisdictions around the world that no one was talking about.

Playing games with the communion

It is noteworthy that the Hierarchy of the Church of Greece refused to put the issue to a vote despite the intense intervention of Metropolitan of Kaisariani who requested a roll-call vote.

Metropolitan Seraphim of Kastoria strongly criticized the actions of the Russian Orthodox Church and its threats. “They say that the Church of Ukraine offers the Holy Communion to the Unites. Don’t the Russians do the same?” he said.

Metropolitan of Mesogaia: The risk is great

Metropolitan Nikolaos of Mesogaia strongly opposed to the Hierarchy’s making decision on this issue. The Metropolitan told the Hierarchy that “the risk is great,” pointing out that the Tomos of Autocephaly did not achieve the unity of the Church of Ukraine.

“We can return to the issue when the time is ripe,” Metropolitan Nikolaos asked the Hierarchy, who insisted that, if the Church of Greece recognized the Church of Ukraine, there would be confusion.

Finally, Metropolitan of Kaisariani expressed fears that a new Old Calendarists issue would re-emerge within the Church of Greece, saying “I am afraid we are sowing a new division.” 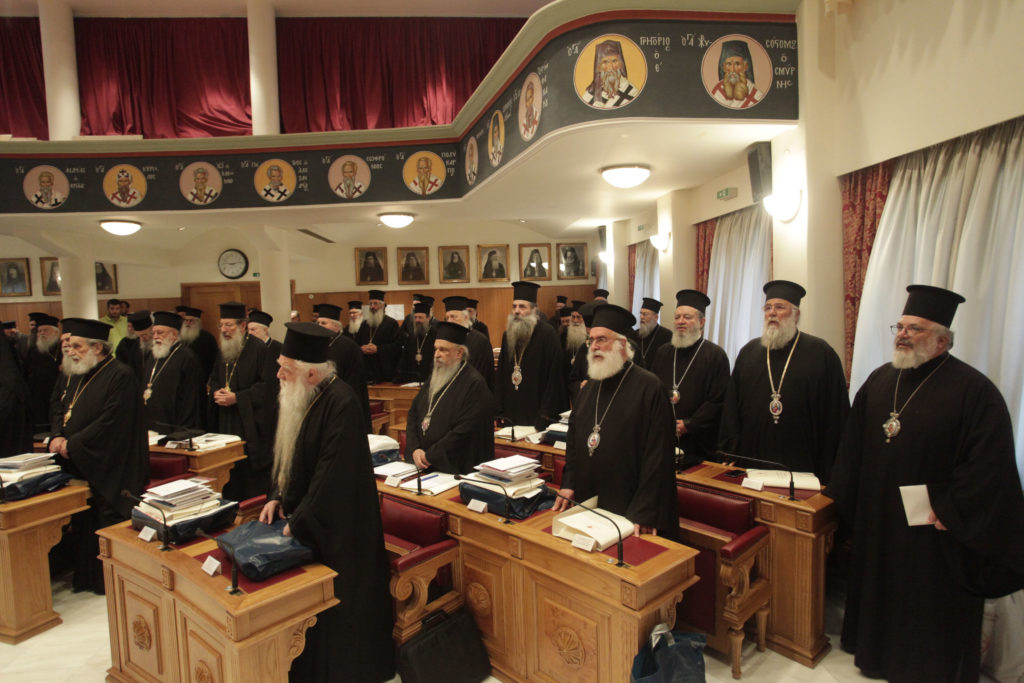 Archbishop of Athens on Ukrainian issue: We are a family with the Ecumenical Patriarch, how can I go elsewhere?

Metropolitan of Kyiv: While our neighbors are bombing, the Greeks showed true brotherly love

Phone call of Ecumenical Patriarch and Archbishop of Athens