Ecumenical Patriarch: I assure our dear brother Patriarch Daniel of the constant care for the Romanian-speaking faithful

On Tuesday, July 26, 2022, Ecumenical Patriarch Bartholomew presided over the Divine Liturgy at the celebrating Church of St. Paraskevi of Picridi, which has been ceded to the Romanian-speaking Community of Constantinople by the Patriarchate.

“Blessed be the God and Father of our Lord Jesus Christ, who has merited us this year as well to venerate the Patron Saint of Hasköy, the Holy Martyr Paraskevi, in one of the smallest communities of the Holy Archdiocese of Constantinople, but great for its piety, for its devotion to the Mother Church, for its adherence to the sacred traditions of our Orthodox faith, as well as for its love for the Church and its Agiasma,” the Ecumenical Patriarch said in his speech and continued:

“It is a fact that even formerly the Orthodox Community here was not much larger. But what distinguished it from all the others, in a special way, is the Church and its Agiasma here, because these have always been, as they are today, a pilgrimage beloved by all the pious Christians of our Constantinople, who have always, and especially on this feast day of St. Paraskevi, as well as on the feast day of the Holy New Martyr Argyro, whose holy relic is enshrined in this Church, have always come here to invoke their help.

And since this Church is adjacent to the Phanar opposite, where the venerable Centre of Orthodoxy has been located since 1601, many of the most solemn people of the Nation were buried in its courtyard in earlier times: Patriarchs, Archpriests, Rulers and Scholars, so it was known as the “noble” cemetery, unlike the “ordinary” cemeteries of Zoodochos Pigi and Egrikapou. Because of the later prohibition of burial in church precincts, the last burial dates back to 1866. The passage of centuries has erased the names of all these eminent ecclesiastical personalities and scholars of the Nation from the gravestones. But those who are resting here, under the shelter of St. Paraskevi and your love, as their guardians and supplicants to God. May their memory be eternal!”

The Ecumenical Patriarch made a special reference to the ruler of Valahia, Constantine Brancoveanu, from Brinkovani, Oltenia, in present-day Romania, who was inextricably linked to the Community of Hasköy because of his decisive contribution to the rebuilding of this Holy Church of St. Paraskevi in 1692, as it is shown by an inscription embedded in the matroneum of the Church: “It was built by Constantine at the expense of the Hungarian-Valahian Semantor Brancoveanu in honour of the Martyr St. Paraskevi”.

“And his own martyrdom and that of his sons on the day of the 15th of August 1714, here in Constantinople, caused emotion to the entire Romanity and led to the conferring of the honour of saints on them by the local Church of Romania, as attested by the elaborate icon of them on the left side of the winged altarpiece of this Church.

This great piety of the Romanian people towards this great benefactor of the Nation and of this Holy Church, combined with the special honour that Saint Paraskevi enjoys from the Orthodox faithful not only of Constantinople, but also of Romania, together with Saint Paraskevi the Passenger, whose holy relic was enshrined in the Patriarchal Church until 1641, when it was transferred to Iasi of Romania, where it remains to this day, were the main reasons that led us to cede, in 2004, the Holy Church of St. Paraskevi of Picridi to our brothers and sisters of the Romanian community here, in order to meet their worship and pastoral needs in their own language.”

On this occasion, the Ecumenical Patriarch addressed “a greeting of love and honor to Patriarch Daniel of Romania, the scholarly Primate, the distinguished professor and wise theologian, whom we also venerate, wishing him long and blessed years. We wish to assure our dear brother and co-officiator of the constant care and concern of the Holy Church of Christ for the Romanian-speaking faithful here.”

The Ecumenical Patriarch then noted:

“As our Orthodox Church is composed of Christians of many nationalities and languages as well as customs and traditions, however, it is the one holy, catholic and apostolic Church, in a similar way, all the Orthodox who live in this city, Romans, Romanians, Russians, Ukrainians, Bulgarians, Georgians, regardless of their ethnic origin, are the flock of the Holy Archdiocese of Constantinople, children of the Ecumenical Patriarch, the only sovereign Bishop of Constantinople”.

Later in his speech, the Ecumenical Patriarch expressed his special thanks to the Supervisor of the Tataoula Region, Metropolitan Stephen of Kallioupolis and Madytos, “for his touching dedication and for his caring interest also for this Community of this region which is under his archieratical supervision and responsibility”. He also praised the Priestly Superior, Fr. Sergius Vlad, “for the zeal and eagerness with which he cares, together with his blessed family, for the maintenance and upkeep of the Temple, as well as for the spiritual edification of his parishioners”.

Concluding his speech, the Ecumenical Patriarch also welcomed Metropolitan Isaias of Tamassos and Orini, “a distinguished Hierarch of the Holy Church of Cyprus, who is visiting on pilgrimage the Most Holy of Cities, together with his honorable entourage, his close and devoted collaborators, in the context of the beginning of pilgrimage tours from the Holy Metropolis of Tamassos to the Mother Church of Constantinople. We congratulate them for this initiative and ask them to convey to our beloved brother His Beatitude Archbishop Chrysostomos of Cyprus, the steadfast and faithful defender of the rights of Christ’s Holy Great Church, the fiery and unstoppable fighter, whose health is at stake, giving to all of us a shining paradigm of strength, patience, fearlessness and unwavering faith to God, our fraternal love, our immense respect and our wholehearted prayers for his strengthening before the Lord in the trial he is experiencing”.

Earlier, the Ecumenical Patriarch was addressed by Metropolitan Stephen of Kallioupolis and Madytos.

Iulian Gherman, Consul of Romania in Constantinople, and a number of faithful were in attendance. The Divine Word was preached by the Vice-Secretary of the Holy and Sacred Synod, Deacon Vosporios. 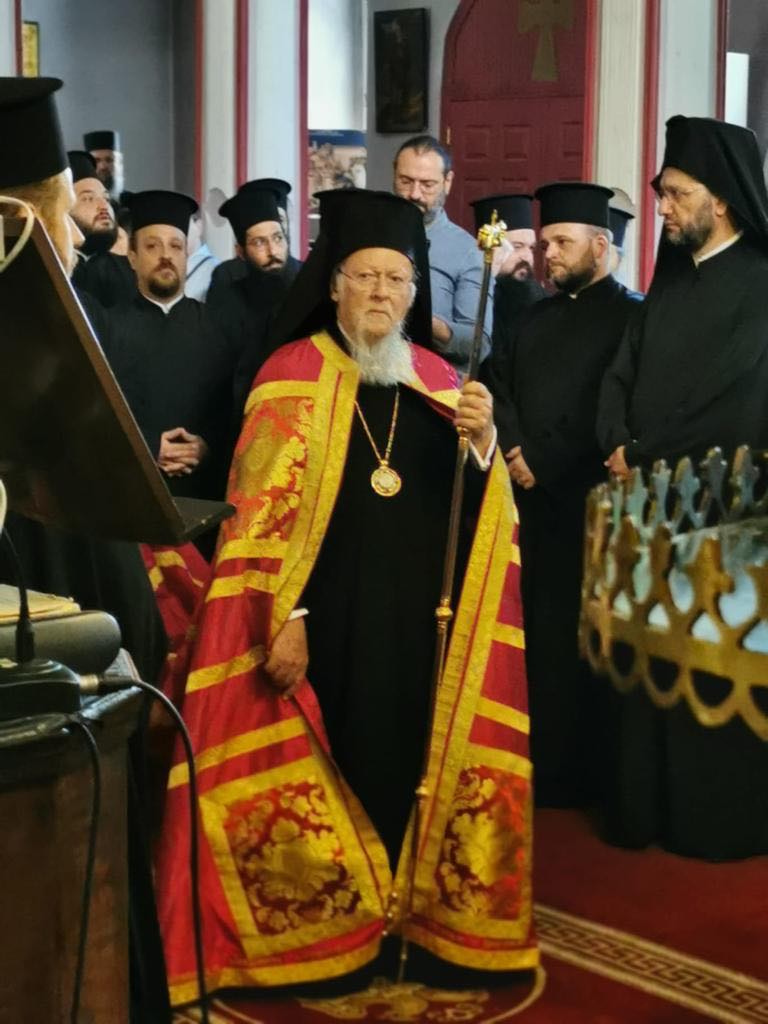 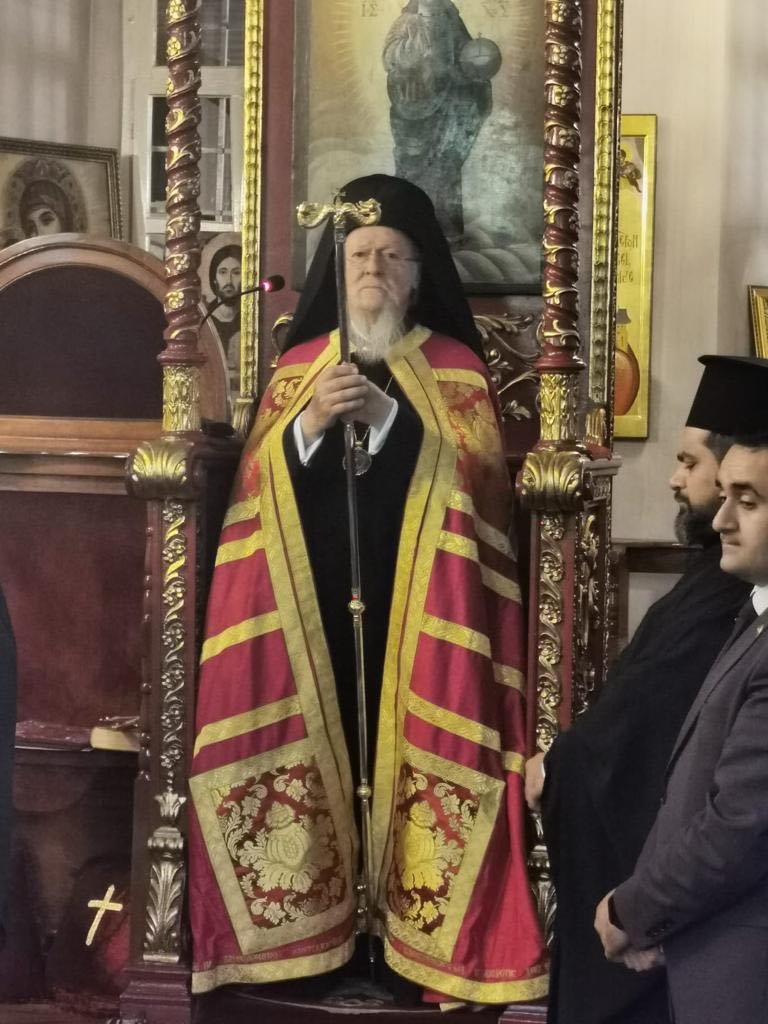 The funeral service of late Elder Metropolitan of Pergamon to be held on Saturday at 12:30

Bishop of Ploiești: In the history of the Prodromitissa Icon, we observe God’s work intertwined with human work