Church Leaders extend season’s greeting to the Patriarch of Jerusalem

The long-standing tradition of exchanging Christmas greetings by Heads of Churches in Jerusalem with Patriarch Theophilos III and the Greek Orthodox Patriarchate was carried out yesterday, Monday, January 10, in the main hall in the Patriarchate of Jerusalem.

The first to arrive were the Franciscan Custody of the Holy Land, led by The Custos His Paternity Father Francesco Patton, who was warmly greeted by Patriarch Theophilos and the Bishops attending. During the meeting, Patriarch Theophilos thanked the Franciscan Brotherhood for their visit and emphasized the importance of the ongoing collaboration between the churches caring for the Church of the Holy Sepulchre, and the joint insistence for the autonomous status of the Holy Places, which “have been the foundation of our resolve confronting the challenges we are facing,” which only led to further deepening the cooperation between the two Brotherhoods.

Patriarch Theophilos stressed the unwavering role Father Patton has been playing in articulating the Churches’ position to the local governmental authorities, “the focus we have kept on the threat to the Christian presence in the Holy Land from radical groups has had remarkable exposure during this Christmas season not just here, but around the world. Our call for attention to the serious and growing threats has been answered by many religious and governmental leaders, and this is due in no small measure to our united voice,” Patriarch Theophilos noted in his speech.

In return, Father Patton gave gratitude to the Patriarch of the Holy City for never abandoning the team spirit of the churches and continuously putting the general interest first by gathering efforts to further protect the Holy Places and the Christian communities in Jerusalem and the Holy Land.

Following the departure of the Franciscan Brotherhood, Pierbattista Pizzaballa, the Latin Patriarch of Jerusalem, along with members of the Latin Patriarchate arrived at the main hall, followed by the Anglican Archbishop Hosam Naoum, who soon met his fellow Heads of Churches from the Coptic Orthodox, Syriac Orthodox, Syriac Catholic, Lutheran, and Melkite Greek Catholic churches.

After drinking a toast to the miracle of the Nativity, Patriarch Theophilos gave gratitude to his fellow brothers in Christ, and noted that thanks to the joint efforts of the Church Leaders the “struggle against the threats posed to the Christian communities of the Holy Land by radical groups is receiving attention both locally and internationally,” and that the Churches no longer find themselves as “a lonely voice in the wilderness”.

Patriarch Theophilos emphasized the impact that the joint statement of the last month had on various governmental and religious leadership and highlighted that it is a movement not only aimed at the protection of the Holy Sites as places of worship, but also the protection of the fundamental interests of the communities to be able to lead lives of dignity, respect, and safety.

“We have the attention of the world as never before in recent memory. And we have the chance to promote the resolution of our concerns in effective ways. There is still a great deal of crucial work to be done. It is, therefore, all the more important that we make a real commitment to dealing with our family problems in the Christian communities here among ourselves in effective dialogue, for our ability to join our efforts and our voices in a common cause in defense of the Christian presence, which has never been more urgent. Wisdom dictates that we must solve our problems among ourselves,” Patriarch Theophilos noted to the attendees.

In exchange, each of the Church Leaders took the opportunity to express, in their own words, Christmas greetings to the Patriarch and the Brotherhood of the Holy Sepulchre, and shared common wishes for the new year hoping that the pandemic would come to an end and to see the Holy Land once again filled with pilgrims and for life in the Holy City to flourish and prosper in a way that is respectful and safe for everyone.

News and photos by: Heba Hrimat 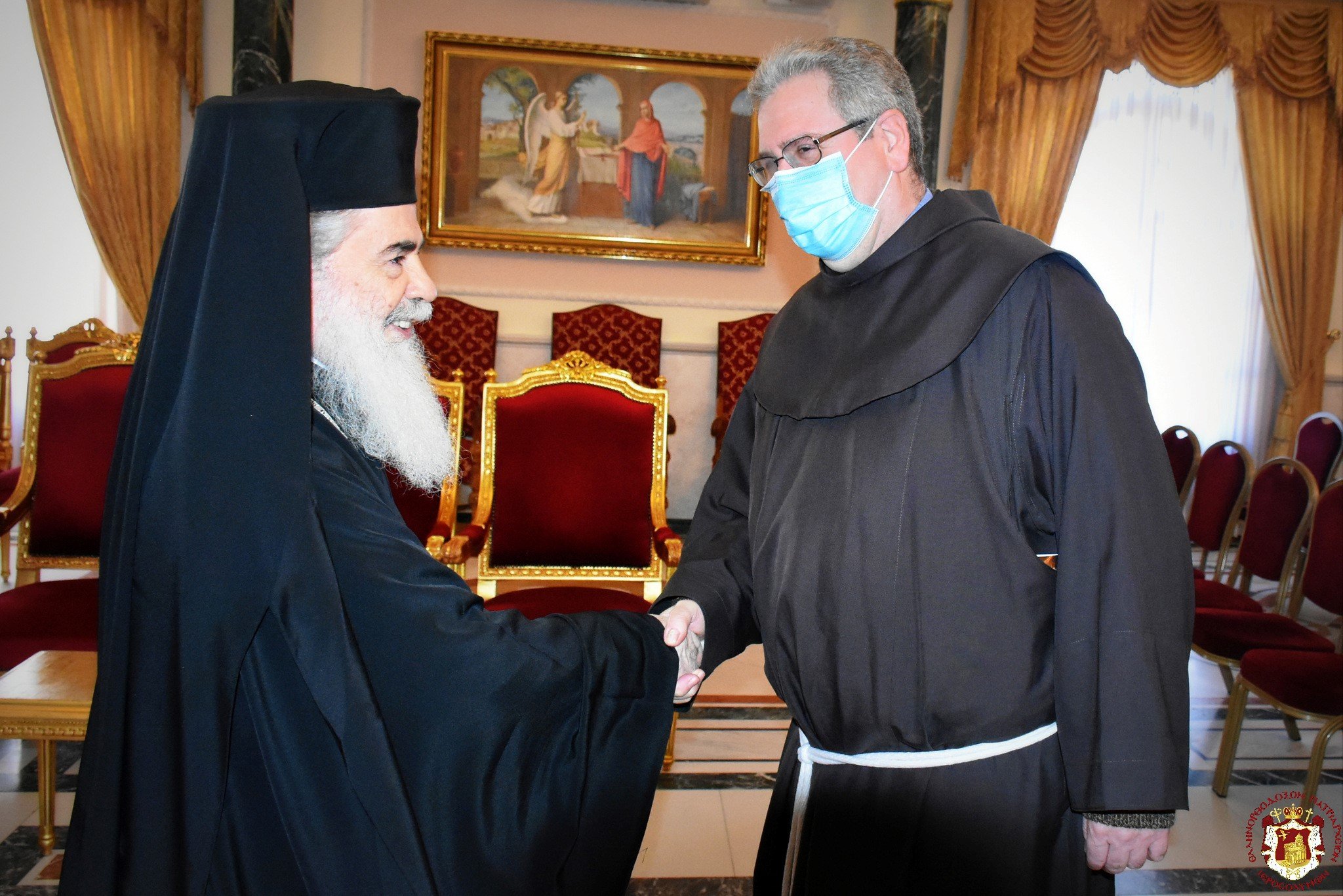 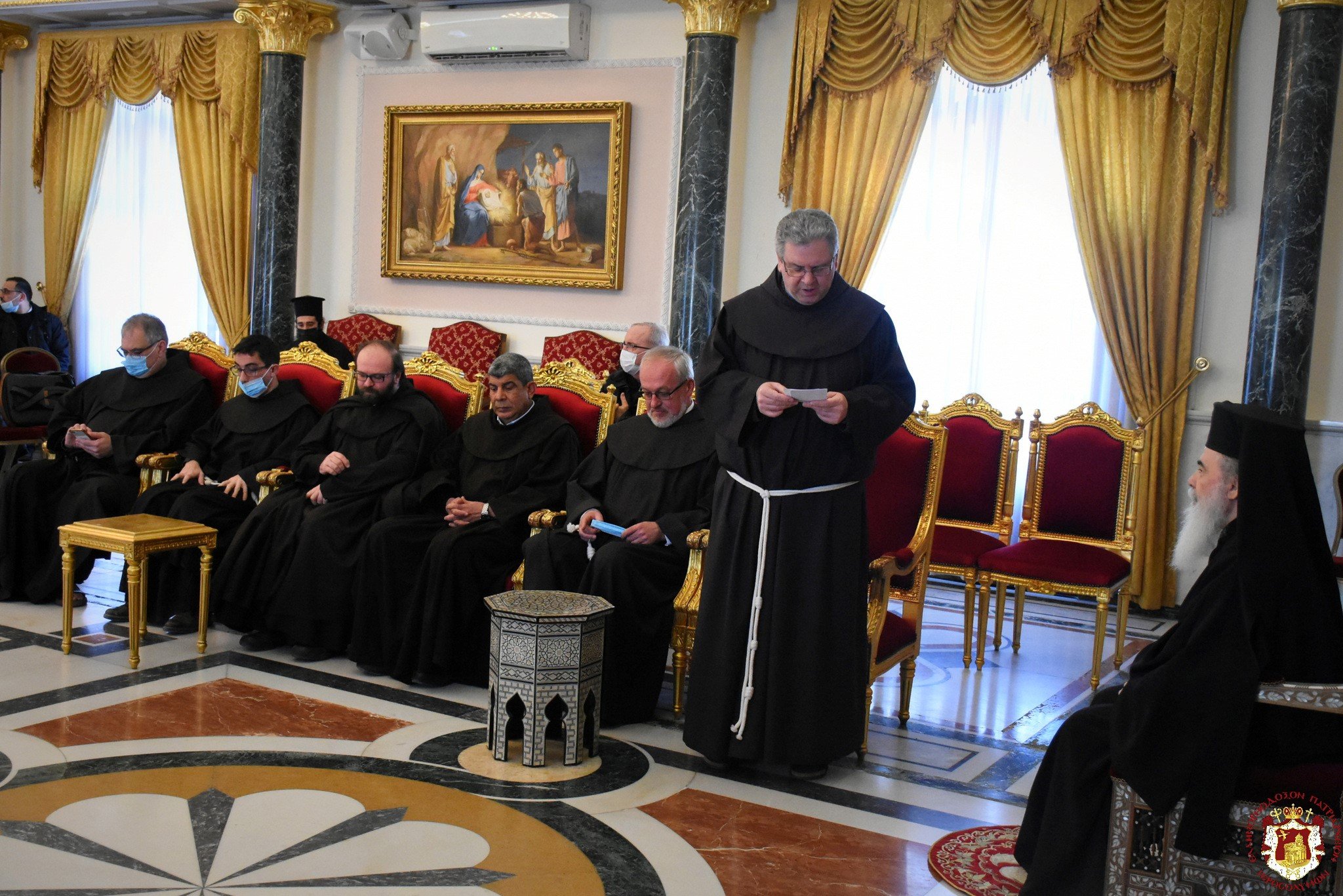 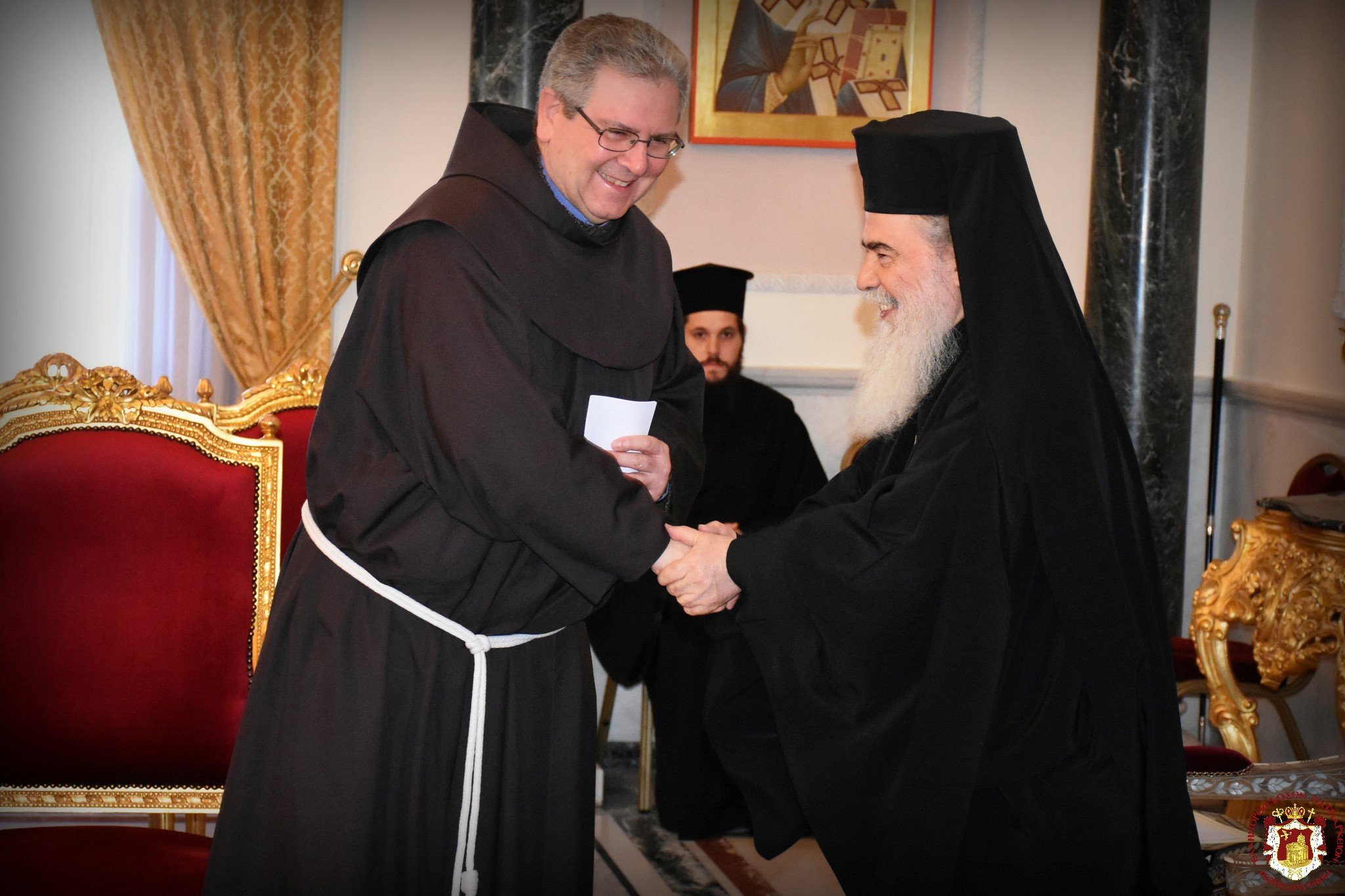 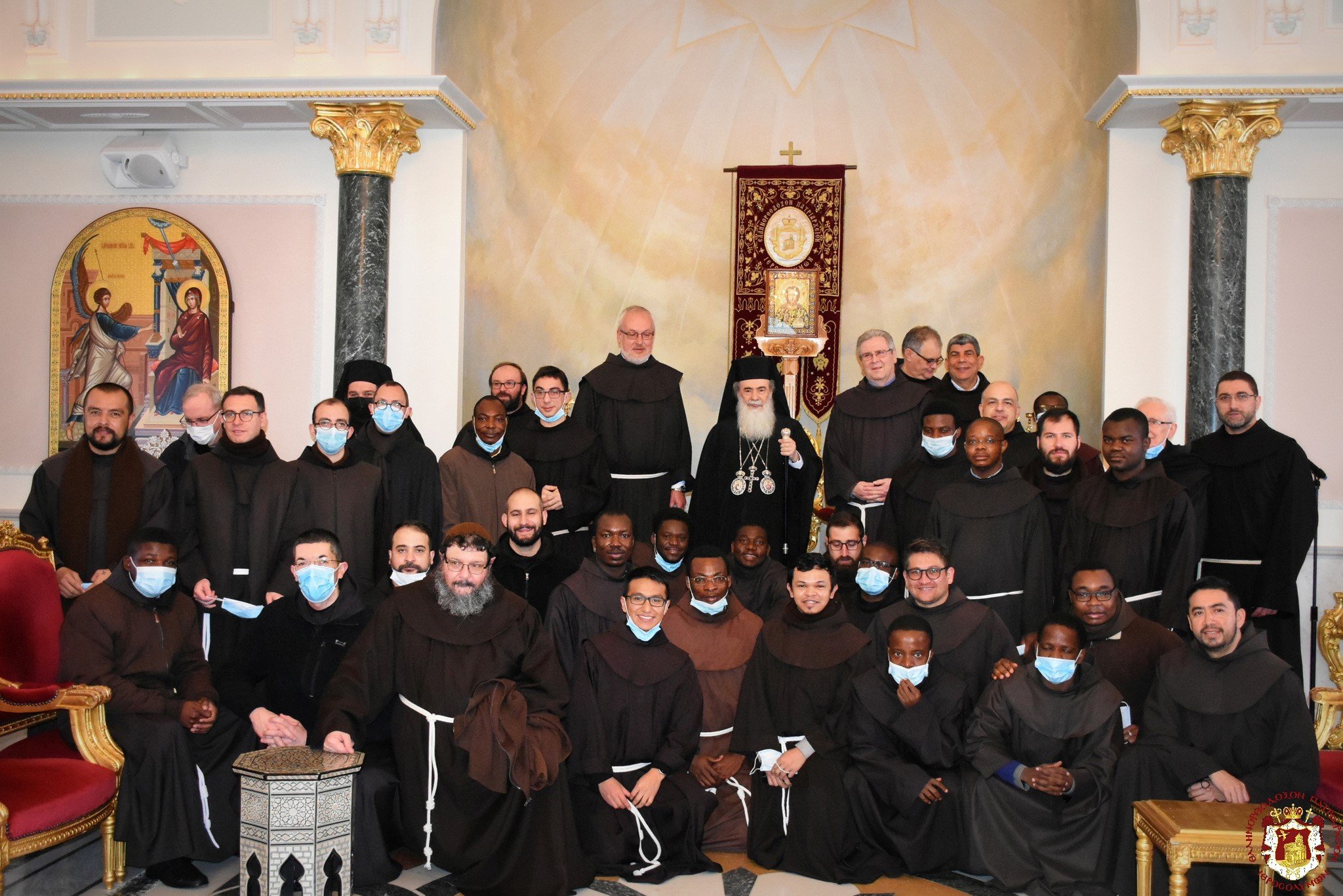 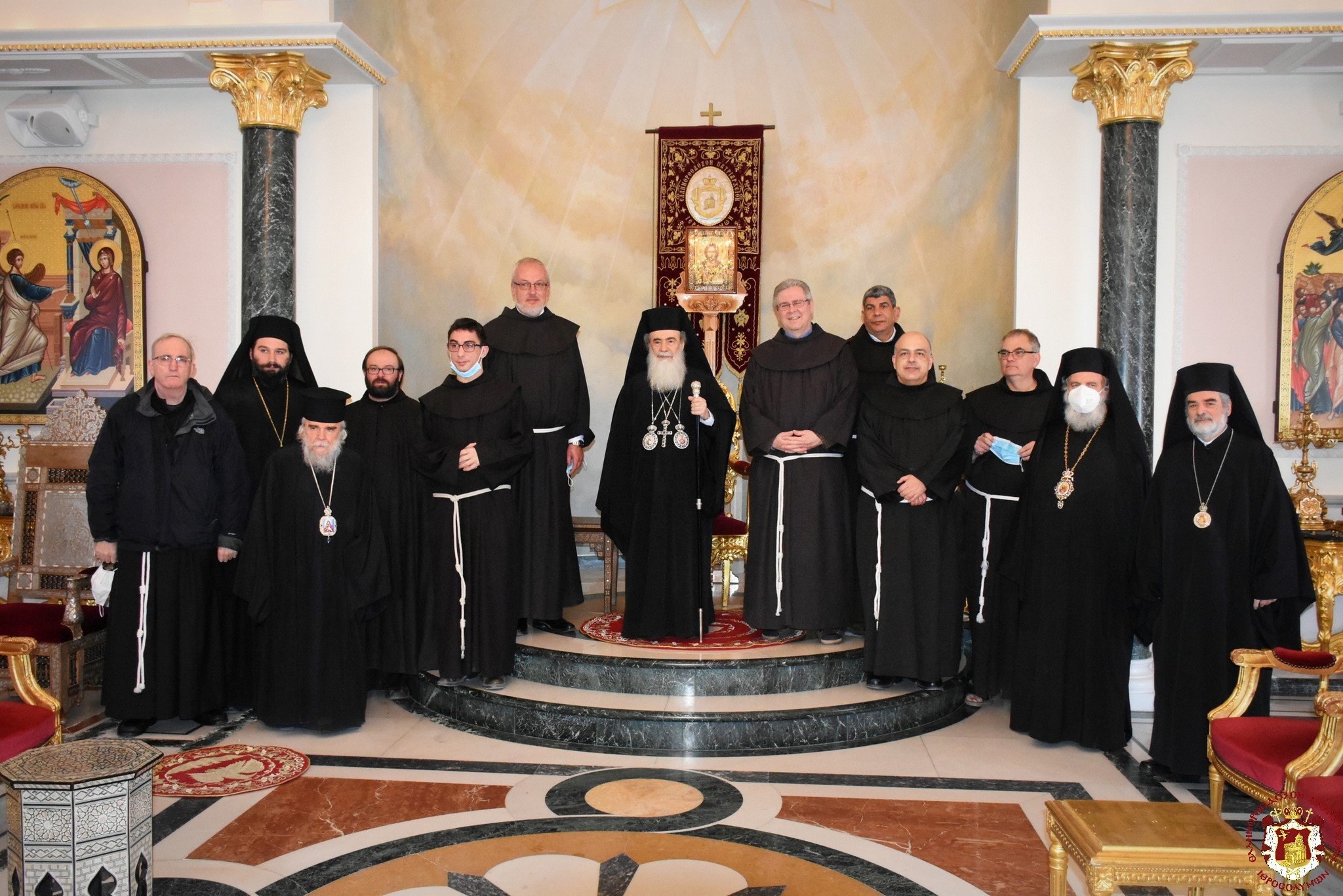 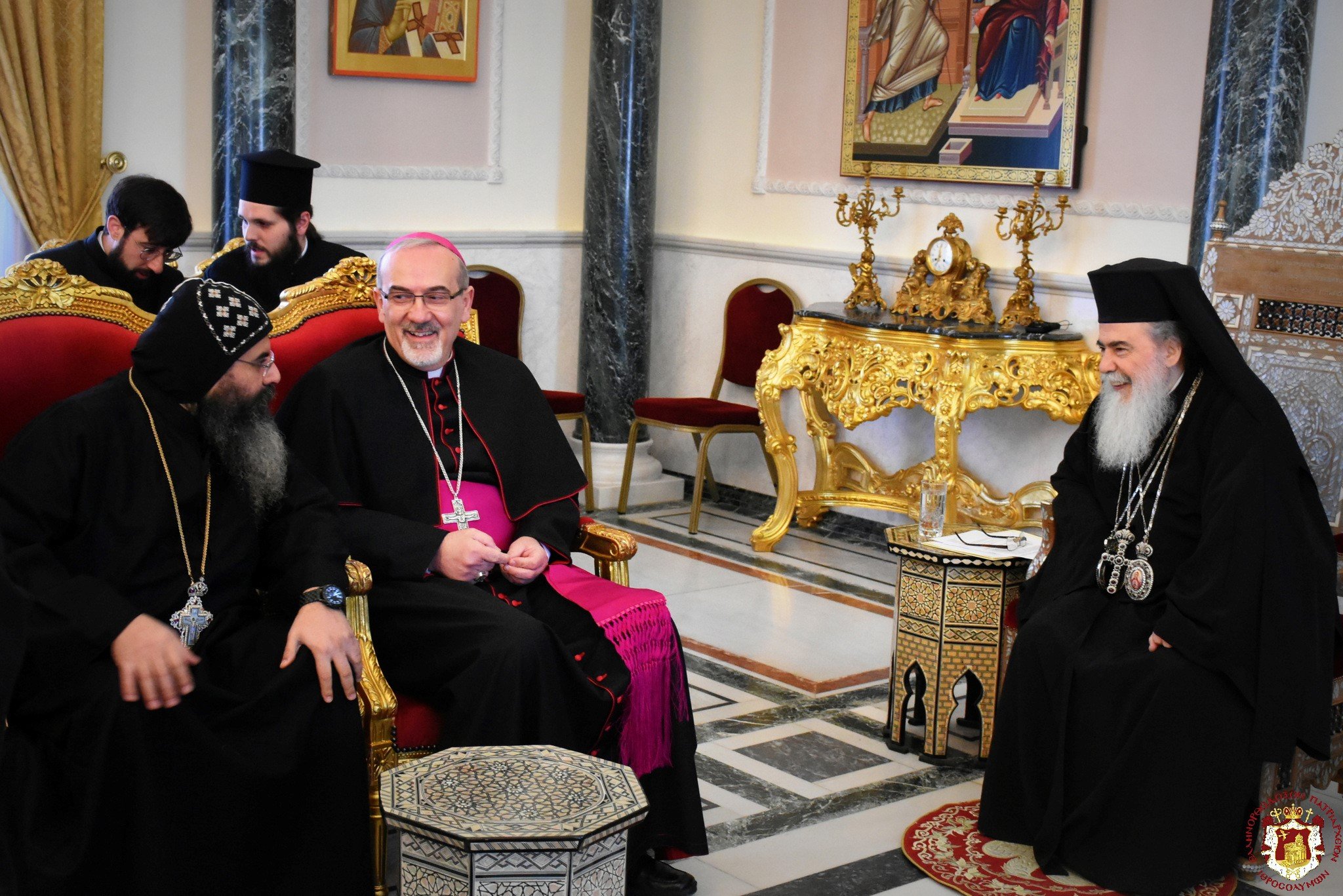 The Forefeast of Theophany at the Patriarchate of Jerusalem (VIDEO)

Patriarch of Jerusalem had a meeting with President Mahmoud Abbas

Patriarch of Alexandria congratulated the newly elected Archbishop of Crete

Archbishop of America: The Moscow Patriarchate follows commands and line of Kremlin

The Archbishop of America Elpidophoros expressed his support for the Ukrainian people during his visit to the Ambassador of...