Who is Saint Corona, the patroness saint of protection against diseases and epidemics

The march of the pandemic revived a forgotten – by most people in Greece and the rest of the West today – figure of the ecclesiastical Orthodox life.

It is Saint Corona (St. Kron or St. Kronpeth)- protector of those suffering from diseases and other epidemics. We have the opportunity to be reminded of the existence and significance of this saint by the Archieratic Commissioner of Bavaria, Protopresbyter of the Ecumenical Throne, Fr. Apostolos Malamousis, who, speaking to “Orthodoxi Alithia” (Orthodox Truth), states, among other things, that the church of Saint Corona in the town of Arget, 35 km from the city of Munich.

Saint Corona lived in Italy, in the middle of the 2nd century AD. She was the wife of a military man during the reign of Emperor Antoninus. When her husband died in 160 AD, she herself became a widow.

She was present at the martyrdom of St. Victor, whom she even urged and encouraged not to be discouraged and to endure his martyrdom with courage until the end. This angered the pagans, who ordered her arrest immediately. Then they led her before Antoninus and after confessing her unwavering faith in Christ there, they took her to the place of her violent murder.

Her torturers tied her hands to the tops of two palm trees that had been bent to the ground. The martyr’s body was then torn apart when the trees were set loose to snap back into standing position

Her memory is celebrated in the Orthodox Church on November 11, while her celebration has been established by the Catholics too. In many cities in Bavaria and Austria there have been churches and chapels in honor of Saint Corona since the 14th century AD.

The church of Saint Corona is located in the city of Arget. In 1599 a Bavarian couple found in the field, where the small church is now built, a wooden icon of Saint Corona, which they carried to their home. However, this icon returned on its own to the field where it was found. This event was the reason for the construction of a small church in that place, in 1648, in honor of the Saint, Fr. Apostolos highlights.

“In 1807 the church was demolished and its stones were used to build a pigsty, but it did not prosper. So, the owner decided to demolish the pigsty and returned the stones, to rebuild anew the church in 1820.

It has since been renovated several times and the most recent is that of 1986, at the expense of the Bavarian State, due to its designation as a protected monument. In the recess, on the outside of the east wall, there is the following text in Gothic script. loosely translated can be as follows: “Tired hiker, stand still, rest here in Saint Corona. If you have sorrows and sufferings, pray reverently to her.” 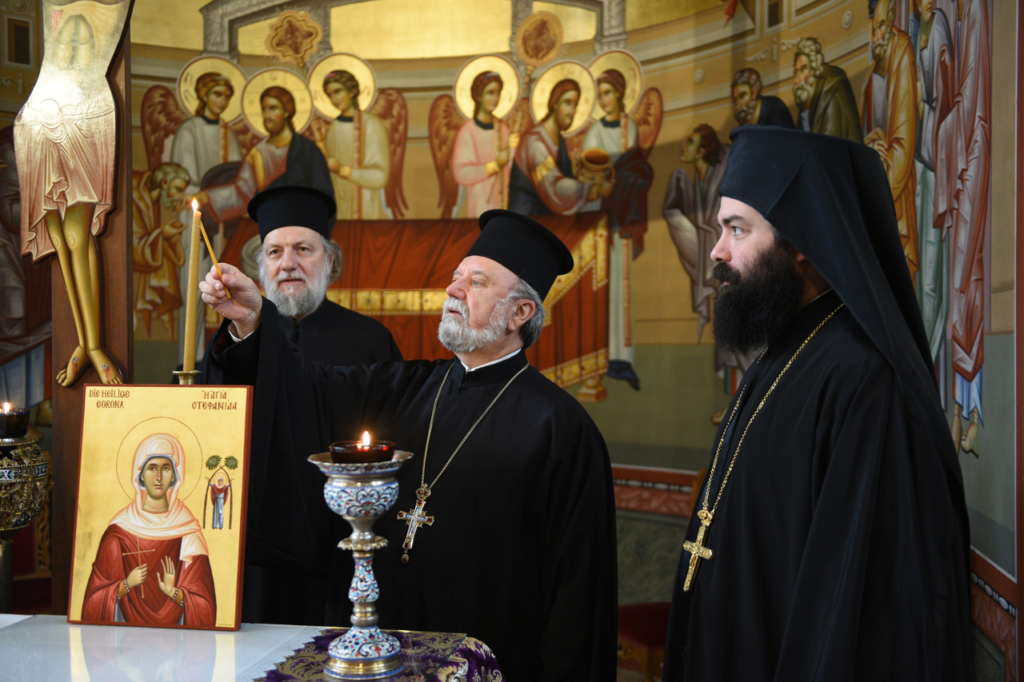 The alarming spread of the coronavirus in the Bavarian region was the reason why the clerics of the Holy Metropolis of Germany in Munich, Protopresbyter Apostolos Malamousis and Protopresbyter George Vletsis, took the decision to go to the church of Saint Corona at the end of March. In that simple and devotional space, they performed a holy prayer for the health and salvation of the people, who are suffering from this modern deadly plague and for the rapid disappearance of the coronavirus epidemic.

Memory of Martyrs Anicetus and Photius

Commemoration of the Miracle of Saint Spyridon, August 11