On Saturday 27 August 2022, on the Forefeast of the Dormition, the service of the Lamentations of the Theotokos – a unique service of the Church of Jerusalem – was held at the Church of the Dormition in Gethsemane, where the Tomb of the Theotokos lies, after an all-night vigil which was officiated by the Master of Ceremonies of the Patriarchate, Archimandrite Bartholomew.

For this service, the Hagiotaphite Brotherhood marched down Via Dolorosa from the Patriarchate Headquarters, and after a short rest at the Hegoumeneion of Gethsemane, the welcoming reception began at the courtyard of the shrine with lit candles and incense offering under the chanting of the Apolytikion of the Dormition. The service was held at the centre of the Church, before the Epitaph of the Mother of God, presided over by H.H.B. our Father and Patriarch of Jerusalem Theophilos, along with Hagiotaphite Hierarchs and Hieromonks, following the Typikon order with the three stasis of the Lamentations, with the incense offering inside the Tomb and around the Church and the chapels in it.

After the completion of the third stasis, the Geronda Secretary-General, His Eminence Archbishop Aristarchos of Constantina delivered the following Sermon:

Your Excellency, Consul General of Greece,

Christian congregation of the Lord

Gathered today, on the eve of the Dormition of the Theotokos around her sacred monument, we remember not only what is connected with her Dormition, but also what from the beginning is connected with her immaculate face. We remember all that the Church received from her and from the Apostles and teaches them to us through its Holy God-bearing Fathers. We engrave anew in our memory that the Theotokos was a gift of God to her childless and godly parents, Joachim and Anna, and to all humanity. That she was the fruit of their natural conjugal relationship and that her conception was not immaculate, that is, she was not free from the original sin and its consequences, which is death. The Mother of God inherited from the Forefather only the original sin and she had no personal sin nor disposition or inclination for it. For the exceeding and surpassing purity and cleanness of her life, God chose her, destined her, to become a vessel of His grace. With the goodwill and providence of God, when she was three years old, she was kept in the Holy of Holies of the Temple of Solomon and then she was given by the Priests to the sober and righteous Joseph to protect her virginity.

“When the fullness of time came”, God called her to become His accomplice in the work of regeneration, rebirth, renovation and salvation of man. Through the mouth of the Archangel Gabriel, he addressed her with the address that no mortal has ever heard, “Rejoice, thou who art full of grace” and asked her to become the mother of His only-begotten Son and Word, Who alone with Him is without beginning. To her question, “how will this be done, since I do not know a man”, she received the answer, “The Holy Spirit will come upon you and the power of the Most-High will overshadow you”. When with trust and free and indiscriminate obedience she answered, “Behold the handmaid of the Lord, let it be unto me according to Thy word,” then she lent her flesh to God, then, “along with the bodiless voice,” the bodiless took flesh, the bodiless became flesh, the second person of the Holy Trinity, Jesus Christ our God, became man, God and became man, God-man, “in one hypostasis and with two natures, wills and actions”.

How does this happen? “There is no investigation of the mystery”. However, it was done with Divine power and energy. “As Ηe knew, as Ηe willed, and as Ηe pleased”. As the Archangel said to the Virgin, “The Holy Spirit shall come upon you…and the holy child born will be called the son of God”. As the Evangelist of love affirms, “the Word became flesh”. As the Apostle of the Gentiles tells us by revelation, that “God sent His Son, born of a woman, from whom Christ took flesh”. As the Church sings in all the masterpiece hymns of the divine poets of its Holy Fathers and above all in the praise hymn for the Virgin in the Liturgy of Saint Basil the Great, “in thee, O Full of Grace, all creation – both the company of Angels and the race of men – doth rejoice…for He made thy womb a throne, and He made thee more spacious than the heavens, from thee God was incarnate, and became a child, He, our God, Who existed before the ages”.

In her who held and gave birth to this supernatural mystery, virginity and motherhood do not oppose each other but meet and unite. As Saint Kosmas, the melodist sings, in the face of the Immortal Virgin, “the bounds of nature are overcome in her, for her childbirth is virginal”, the birth is held by a Virgin. Similarly, the bounds of nature are overcome during her exodus from this world, because “her death is the spousal of life”, death is betrothed to life. She who is “a virgin after childbirth”, is also “living after death” (Katavasia ode 9). After her burial at “the village of Gethsemane” by the Holy Apostles who were gathered in a heavenly command through the air”, her Son, as Saint John Damascene sings, “bestowing on her the supernatural, as he protected her in the labour and kept her a Virgin, even in the tomb her body was preserved incorrupt and was co-glorified by her divine metastasis”.

This truth is also expressed by the Kontakion of the Feast of the Dormition, “the grave and death could not hold the Theotokos, who is unsleeping in her intercessions and unfailing hope in her mediations. For as the Mother of Life she was translated to life by Him Who dwelt in her ever-virgin womb”. The tomb housed but did not preserve, the God-receiving relic of the Theotokos. However, it was sanctified by this and is sanctified by the daily Divine Liturgy, which is offered on it. To this tomb, which, as a precious pilgrimage relic, has been preserved throughout the centuries by the Patriarchate of Jerusalem, we are exhorted to hasten by the pre-eminent praiser of the Most Holy Theotokos, Father John of Damascus, “Come ye faithful, let us draw nigh unto the tomb of the Mother of God, let us embrace it, touching it sincerely with the lips and eyes and forehead of the heart, and let us draw up bounteous gifts of healing that stream from the ever-flowing fountain” (Matins, Ode 9, 2nd canon, Troparion 2).

In the same way, on tomorrow’s “important day of the metastasis”, as Saint John of Damascus calls it, and on today’s overwhelming exodus ceremony, which is presided over by the Primate of the Church of Jerusalem, His Beatitude Patriarch of Jerusalem Theophilos III, let us kneel in reverend before the empty Tomb of the Mother of God and pray to the one who experienced her metastasis in the heavens before the common Resurrection and sits on the right hand of the Saviour and has boldness before Him, to intercede for the forgiveness of our sins, for the cleansing of our souls from our personal passions, for the healing of our infirmities, for the healing of the wounds of the body of the Church and the wounds of the Orthodox states, for goodness of the state of the universe, for the pacification of the Middle East, for the cessation of the horrible wars waged unjustly throughout the world, for the repose of their deceased victims, for the protection and relief of their living victims, wounded, homeless, displaced and refugees, and for the transformation of earth again into a paradise, in which the fruits of the prayer, “Your kingdom come, let Your will be done” will be visible.”

The service continued with the praises, Doxology and the litany of the Epitaph up to the entrance of the Church, the supplication and its placement before the Theotokos Tomb until the Apodosis of the Dormition.

After the service, the Hegoumen, His Eminence Metropolitan Joachim of Helenoupolis hosted a fasting reception with grapes and seasonal fruit at the hegoumeneion. 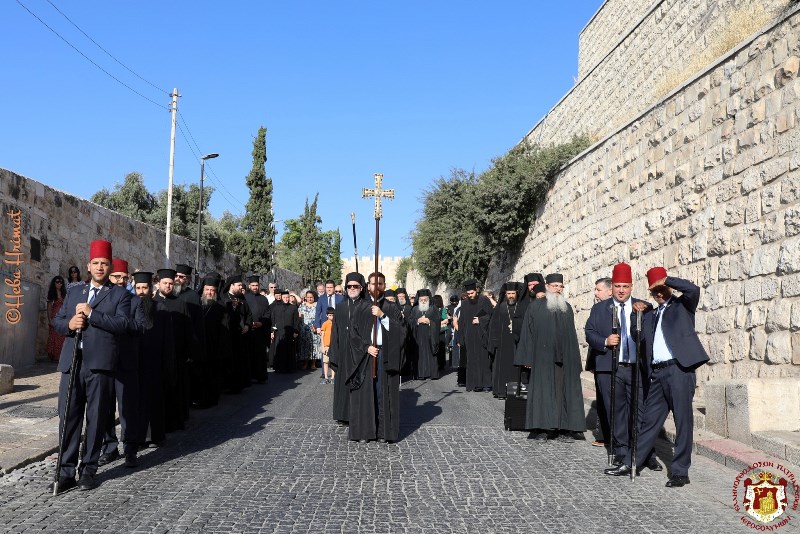 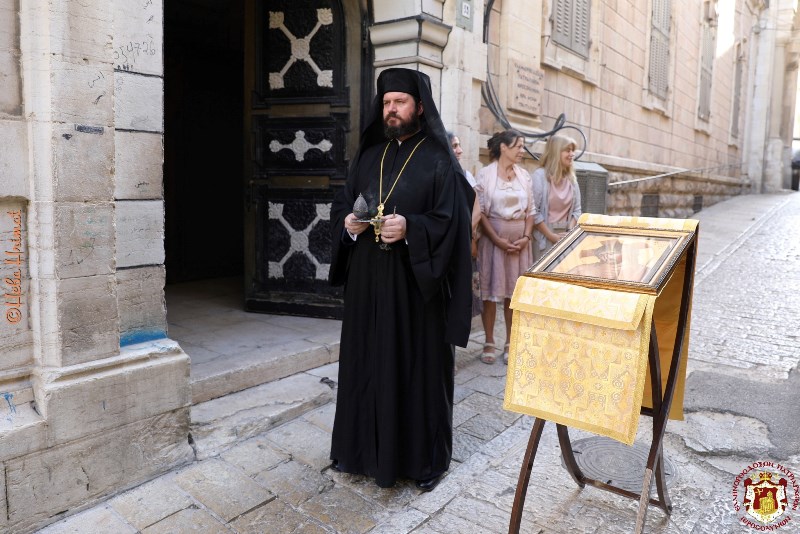 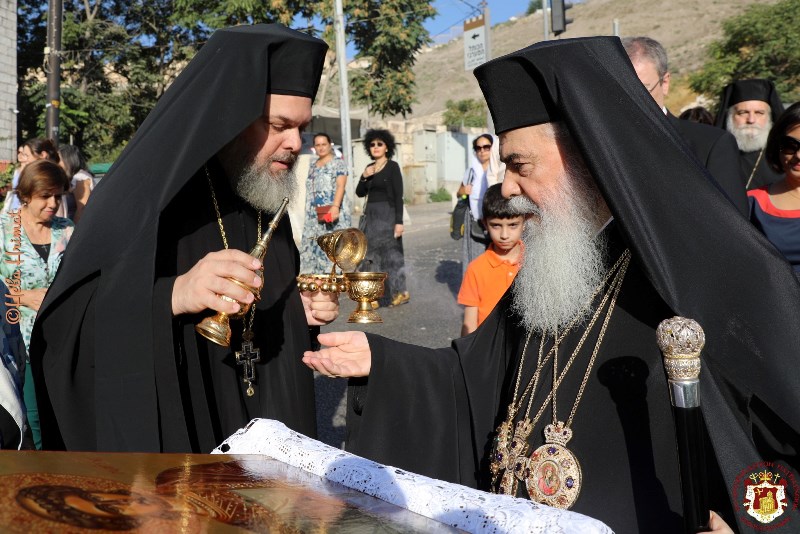 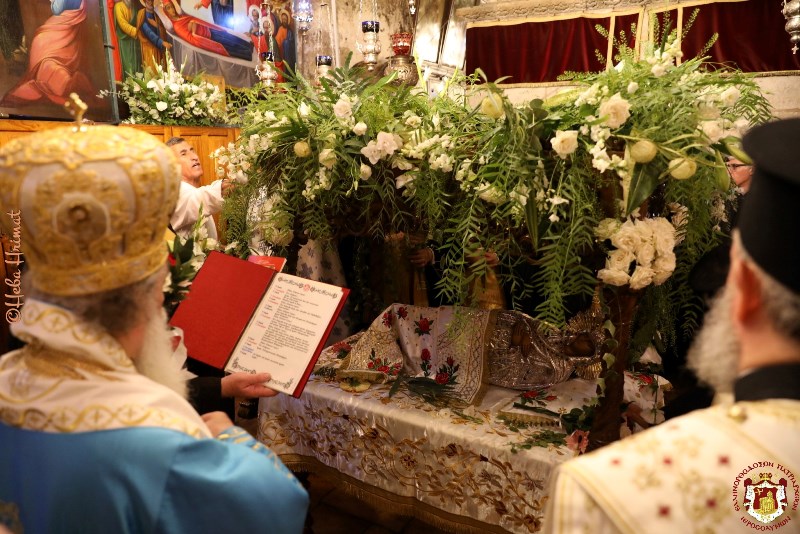 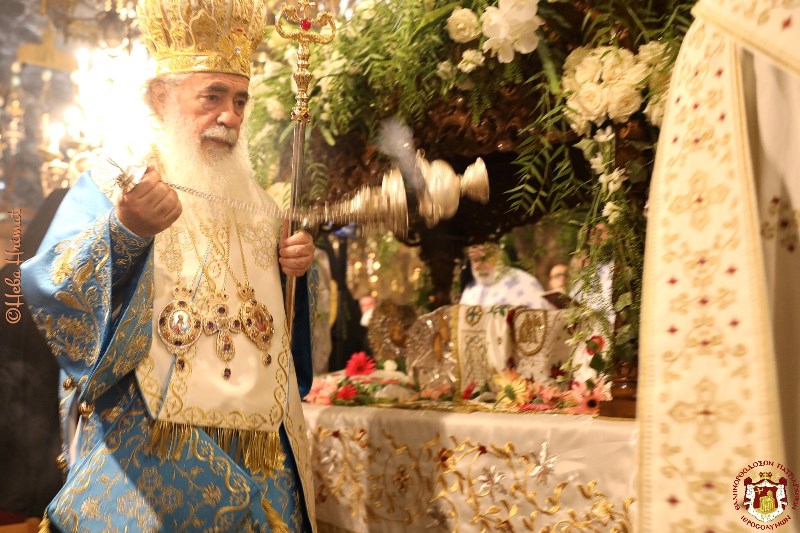 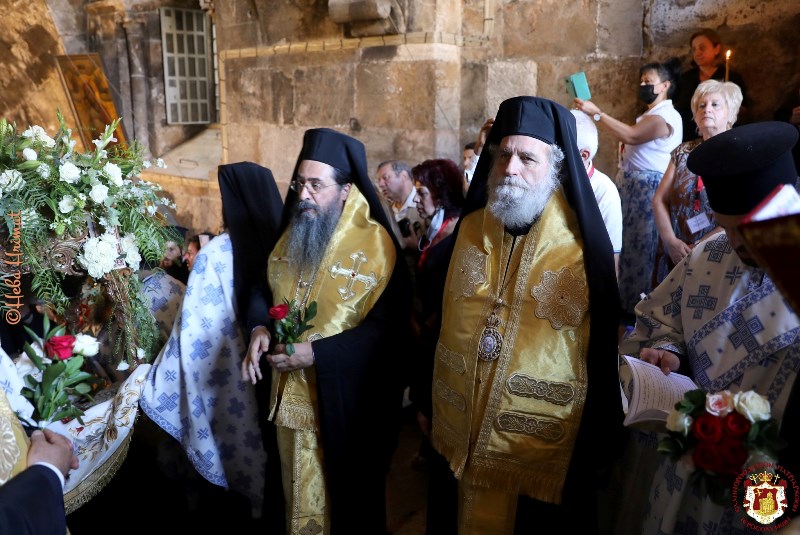 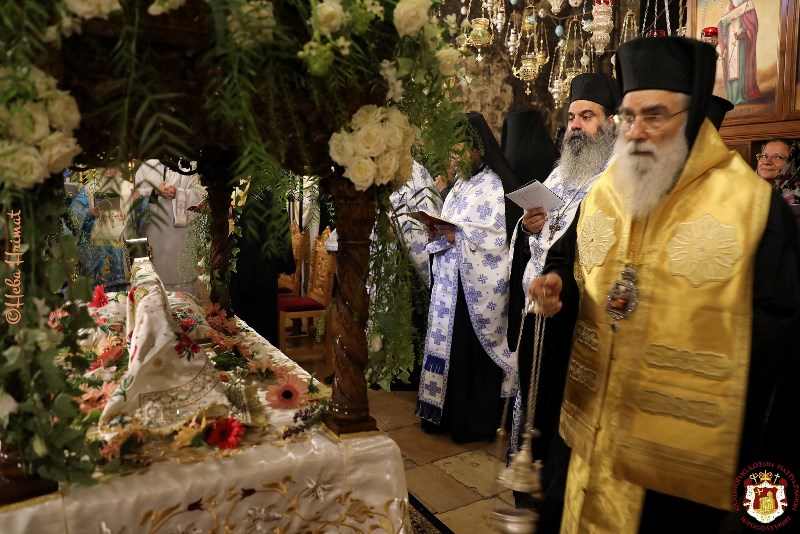 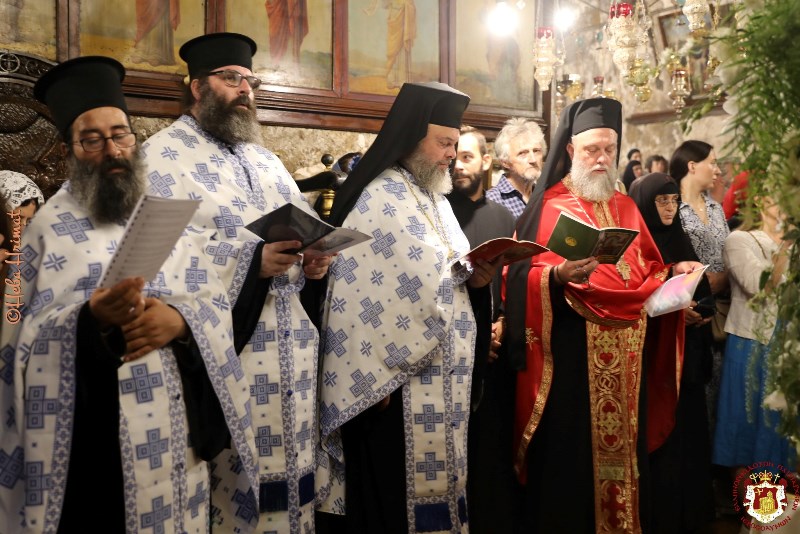 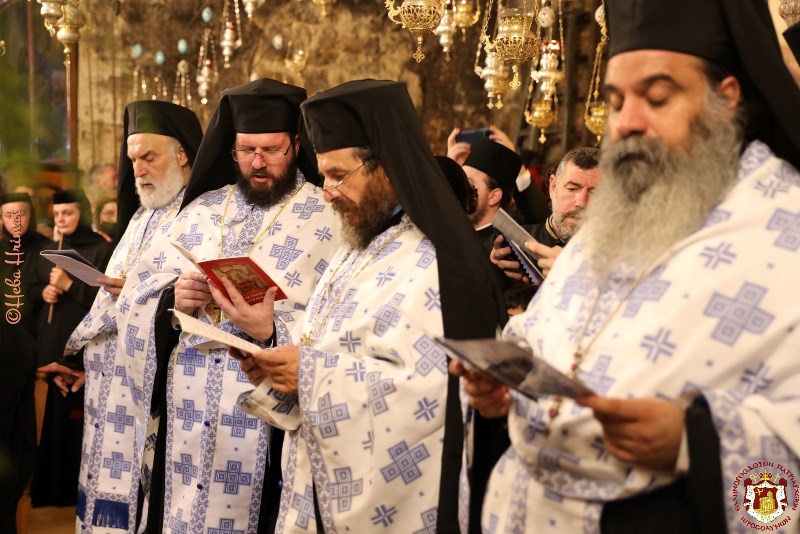 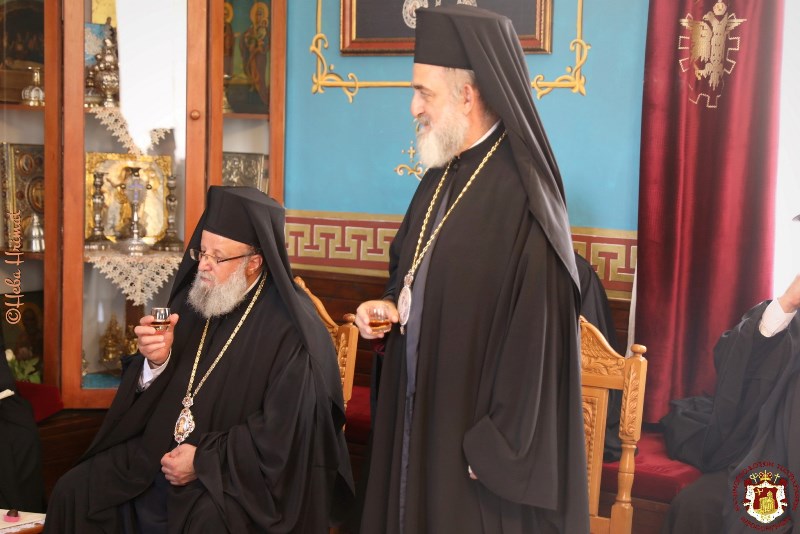 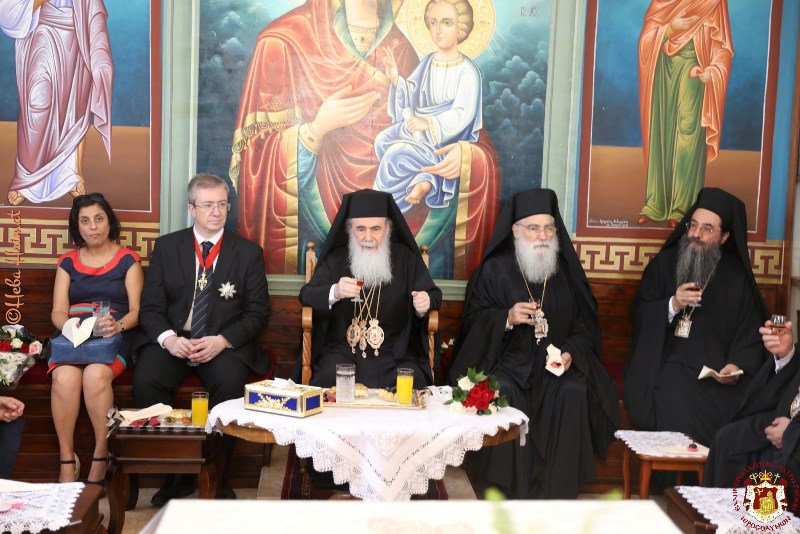