On Tuesday, November 29, 2022, the Patriarchate of Jerusalem celebrated the commemoration of the Holy New Martyr Philoumenos the Hagiotaphite, who suffered a martyr’s death at the shrine of Jacob’s Well on November 16, 1979, where he served as Hegoumen.

Saint Philoumenos, as a new martyr, was also included in the Hagiologion of the Church of Jerusalem in 2009. Every year his memory is honoured at the place of his martyrdom, where the rector for the last 40 years, Hegoumen Archimandrite Ioustinos constructed a magnificent Church.

In this Church, above Jacob’s Well, the Divine Liturgy was officiated by Patriarch Theophilos of Jerusalem, with the co-celebration of Metropolitan Kyriakos of Nazareth, the Archbishops, Aristarchos of Constantina and Philoumenos of Pella, the Elder Kamarasis Archimandrite Nectarios and the Typikon Keeper Archimandrite Alexios, Priests from Greece, the Hegoumen of Rafidia Archimandrite Leontios, Archimandrite Kyriakos from Saint Gerasimos Monastery, Archdeacon Mark and Hierodeacon Dositheos, Priests from the neighbouring regions and from Nazareth. The chanting was delivered by the Arab-speaking doctor Yacub Bejali, who received his diploma today, in Greek and the choir of the regions of Samaria in Arabic. The Liturgy was attended by the Consul General of Greece Mr Evangelos Vlioras and many members of the flock, monks and nuns from Jerusalem and pilgrims from Greece and Cyprus praying in reverence.

To this pious congregation, Patriarch Theophilos of Jerusalem delivered the following sermon:

“Lord, the whole creation celebrates the commemoration of Your Saints, the heavens rejoice with the angels and the earth is glad with its people. By their intercessions have mercy on us”, the hymnographer of the Church proclaims.

The grace of the Holy Spirit has gathered us all in this holy shrine of the Patriarch Jacob’s Well, where the Samaritan woman met the Messiah Christ, to honour in eucharist the commemoration of Saint Philoumenos the Hagiotaphite, the martyr and preacher of Christ’s faith.

When he came to the Holy Land from the island of Cyprus, he joined the monastic order of the “Studious” (Spoudaioi), namely the Hagiotaphite Brotherhood, and was distinguished for his godly zeal for all the Holy Shrines, and for this particular biblical place here.

We use the word “particular” because our Father Philoumenos suffered a martyr’s death for the love of our Saviour Christ in this holy place, and thus became an imitator of the passions of Christ and of the same blood with Him. As the psalmist says: “They compassed me about also with words of hatred; and fought against me without a cause. For my love they are my adversaries: but I give myself unto prayer. And they have rewarded me evil for good, and hatred for my love” (Ps. 109:3-5).

Indeed, Saint Philoumenos, like Saint Stephen the First Martyr, received fire from the followers of the devil while he was praying in the same place where Jesus told the Samaritan woman: “I that speak unto thee am he [the Messiah]” (John 4:26), and “God is a Spirit: and they that worship him must worship him in spirit and in truth” (John 4:24).

Interpreting these words of the Lord, Saint Cyril of Alexandria says: “God righteously accepts the spiritual pilgrim, who does not bear the style of reverence according to the Jewish way, that is in shape and formalities, but the pilgrim who shines in an evangelical way through the achievements of virtue and applies the true worship through the correctness of the divine doctrines”.

My dear brethren, the special honour which is offered to the holy martyrs by the Church is owed to this. “Lord, in the commemoration of Your Holy Martyrs the whole creation celebrates, the heavens rejoice with the angels, and the earth is glad with its people,” Saint John of Damascus says. According to Saint Clement of Alexandria, “we call martyrdom the end, not because the person has reached the end of his life, like the others, but because he has shown the end of a perfect work of love”.

This perfect love for Christ was shown by Saint Philoumenos with his martyr’s death, as he suffered many toils and received the crown in the heavens along with the other martyrs, whose only purpose is their union with the Saviour Christ. Saint Paul’s preaching has contributed to this cause: “For our conversation is in heaven; from whence also we look for the Saviour, the Lord Jesus Christ: Who shall change our vile body, that it may be fashioned like unto his glorious body” (Phil. 3:20-21).

Commenting on these words of Saint Paul, Theodoritos says: “He says that our body will be fashioned according to Christ’s glorious body, not according to the quantity of glory but according to the quality. For even this [body] is full of light”. In other words, the martyrs’ bodies became of the same fashion as Christ’s body according to the quality, namely the incorruption, as this is phrased by the hymnographer: “Thy martyrs, O Lord, in their courageous contest for Thee received as the prize the crowns of incorruption and life from Thee, our immortal God. For since they possessed Thy strength, they cast down the tyrants and wholly destroyed the demons’ strengthless presumption. O Christ God, by their prayers, save our souls, since Thou art merciful”.

The murdered body of Saint Philoumenos also received God’s incorruption, and his holy relics work miracles, testifying to the glory of God; “God is wondrous in His saints” (Ps. 68:36) the Psalmist says.

Our Father Philoumenos became a co-citizen of the Saints and a friend of God (cf. Eph. 2:19), and having boldness before God (1 John 3:21), he urges us all through Saint Peter’s words: “Beloved, think it not strange concerning the fiery trial which is to try you, as though some strange thing happened unto you: But rejoice, inasmuch as ye are partakers of Christ’s sufferings; that, when his glory shall be revealed, ye may be glad also with exceeding joy” (1 Peter 4:12-13). [In simple words, my dear ones, I urge you not to be surprised regarding your persecutions and sorrows. No, do not feel surprised, but as long as you partake in the passions of Christ with the sorrows and the persecutions, suffering for the sake of His Name, you should rejoice as well as endure, so that you may have the great joy when His glory will be revealed in His Second Coming].

The Holy Church of Christ, especially the local Church of Jerusalem boasts in the Lord (Romans 15:17) for Saint Philoumenos, its confessor of faith and martyr of our Orthodox faith, who shines forth the light of the divine love, peace and righteousness, as well as of the truth, amidst the darkness of apostasy and turbulence of the world of this era.

Therefore, let us entreat the Holy Martyr of Christ, Philoumenos, who shared the passions of Christ and became a communicant of the heavenly brightness, that along with the intercessions of the Most Blessed Theotokos and Ever-Virgin Mary, they may pray for the salvation of our souls.

Many happy returns and a blessed fasting period, toward the welcoming of the Nativity of our God and Saviour Jesus Christ in the caves of our hearts. Amen.”

At noon, the Hegoumen hosted a meal, attended by Vlioras, Officials from the Palestinian Autonomy of Samaria, and others. 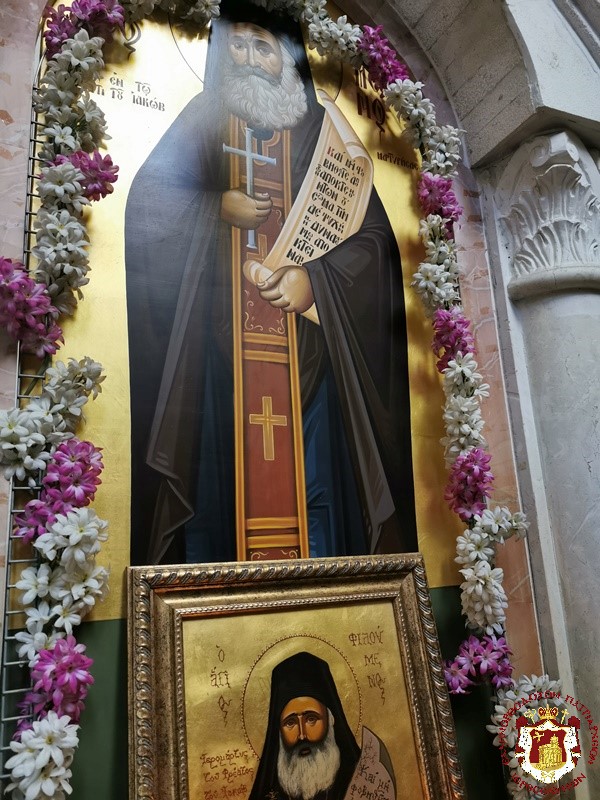 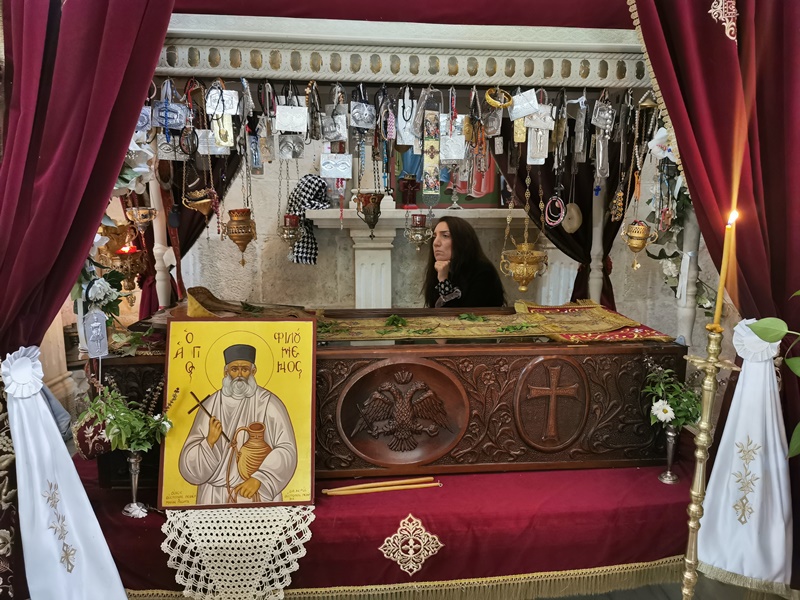 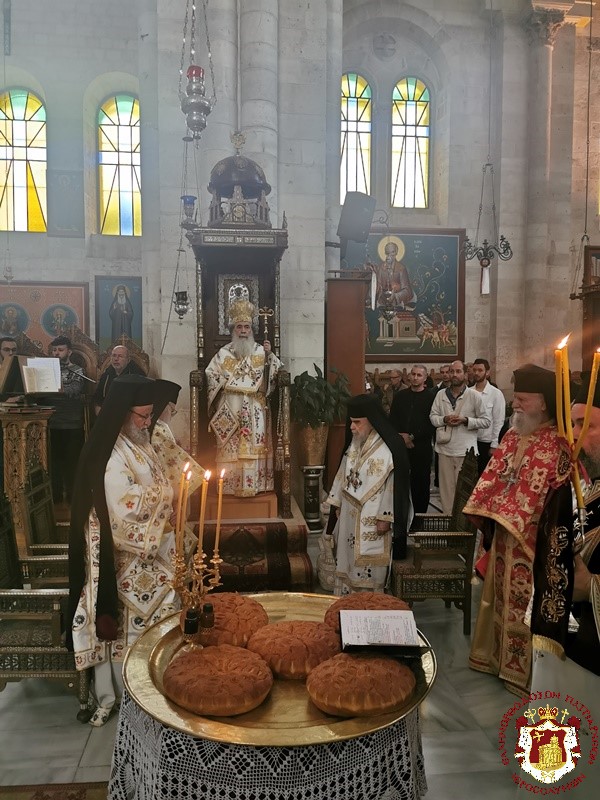 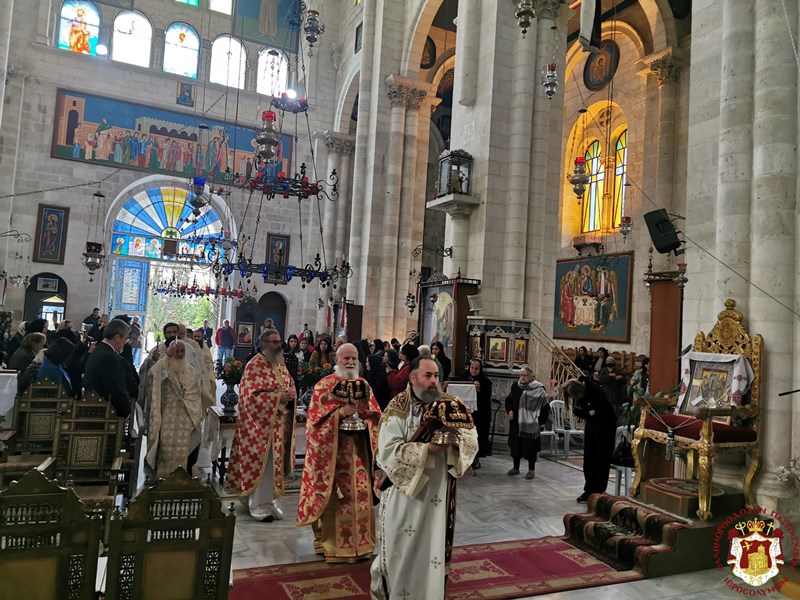 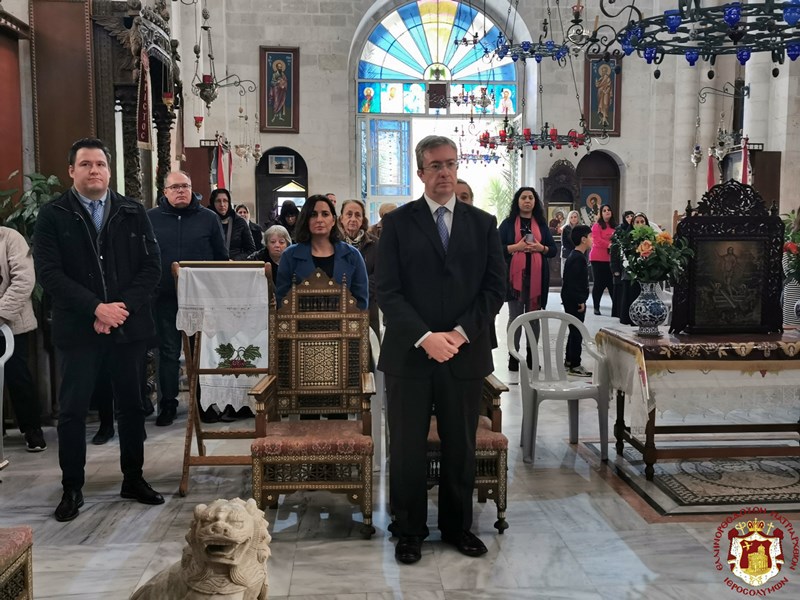 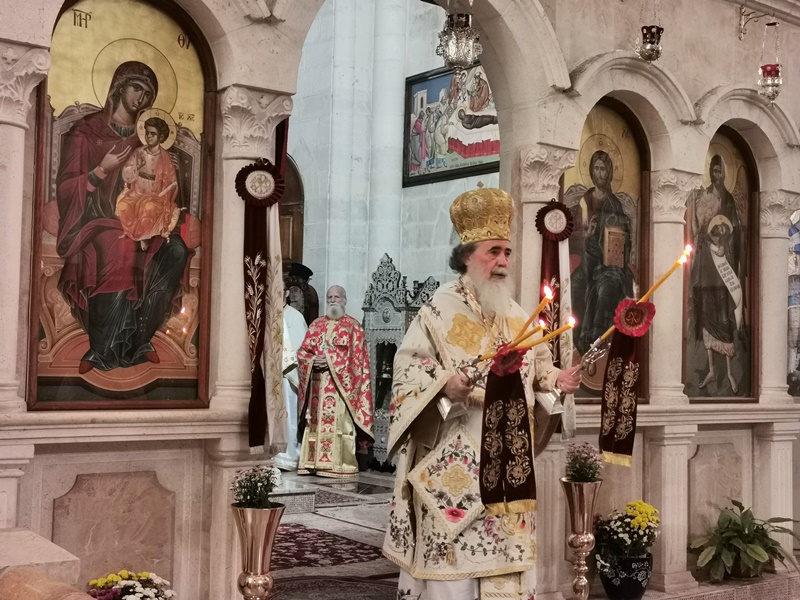 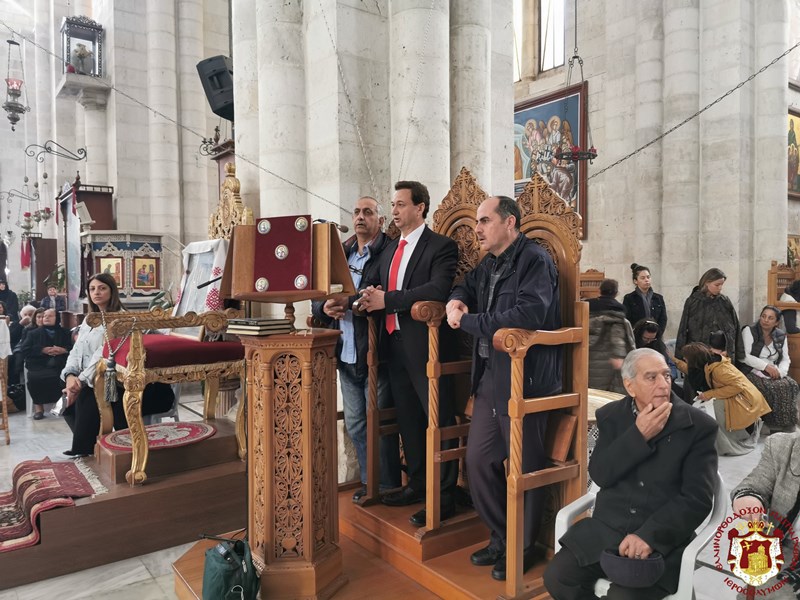 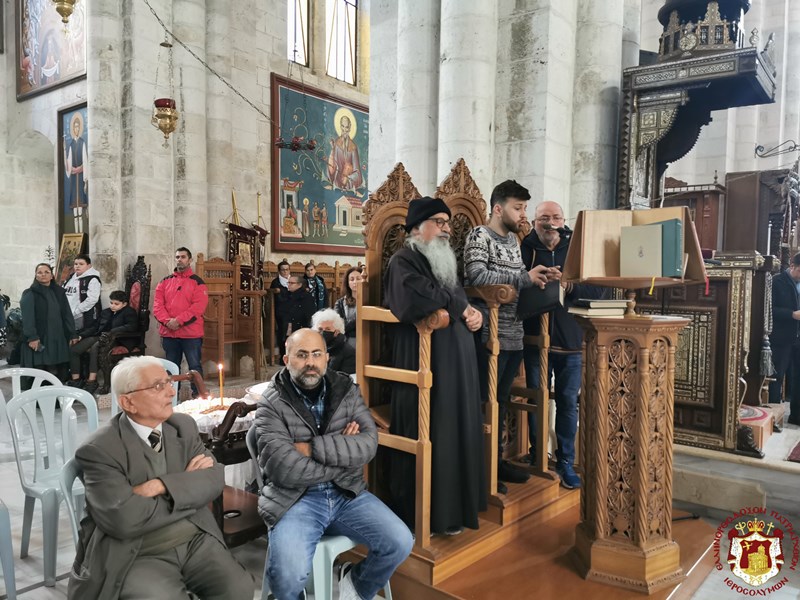 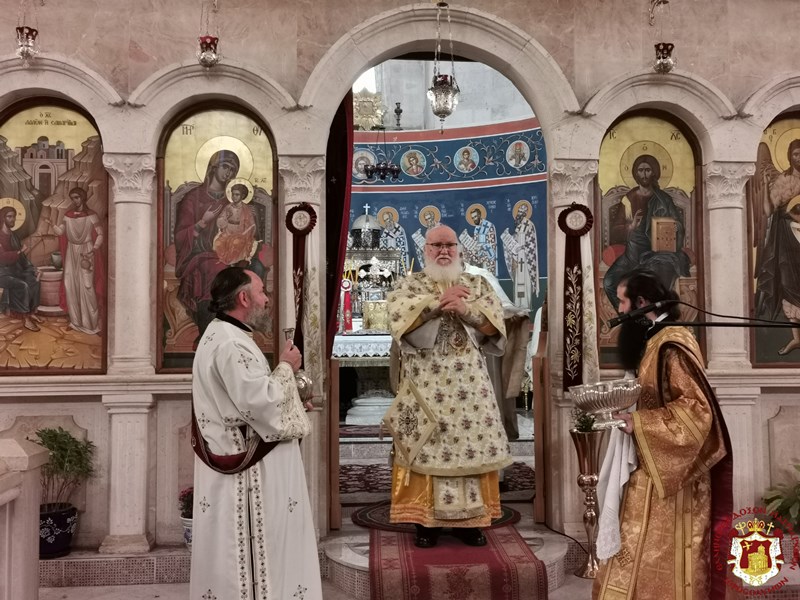 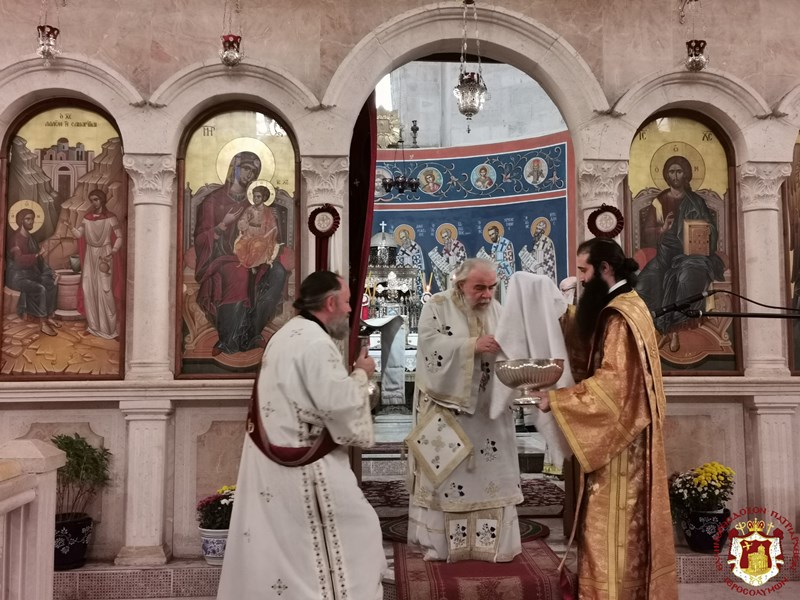 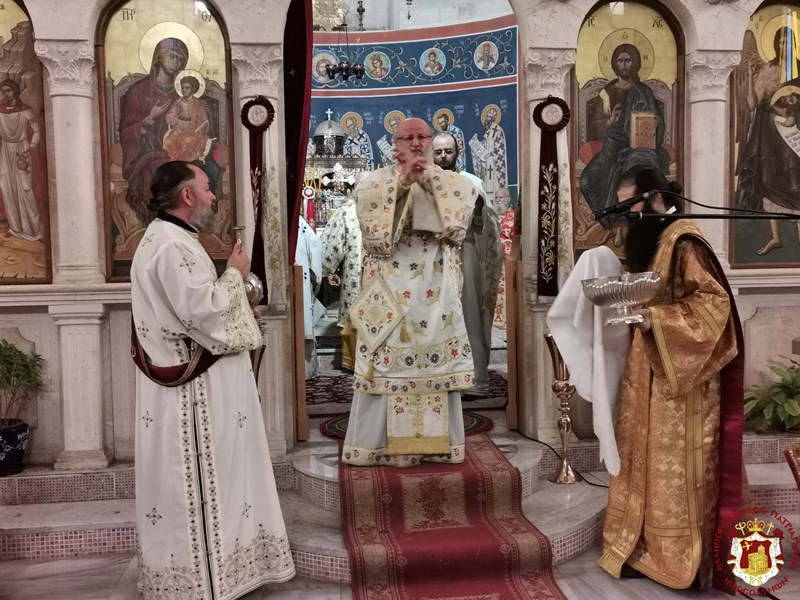 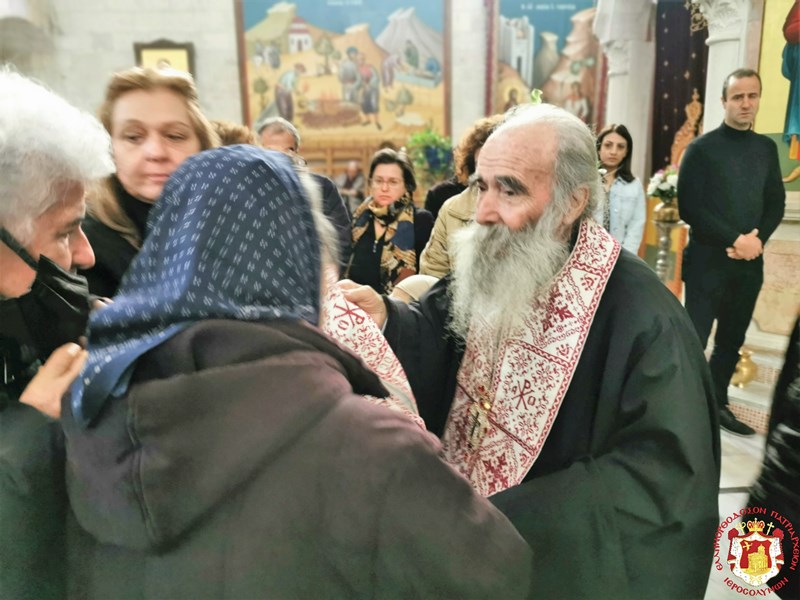 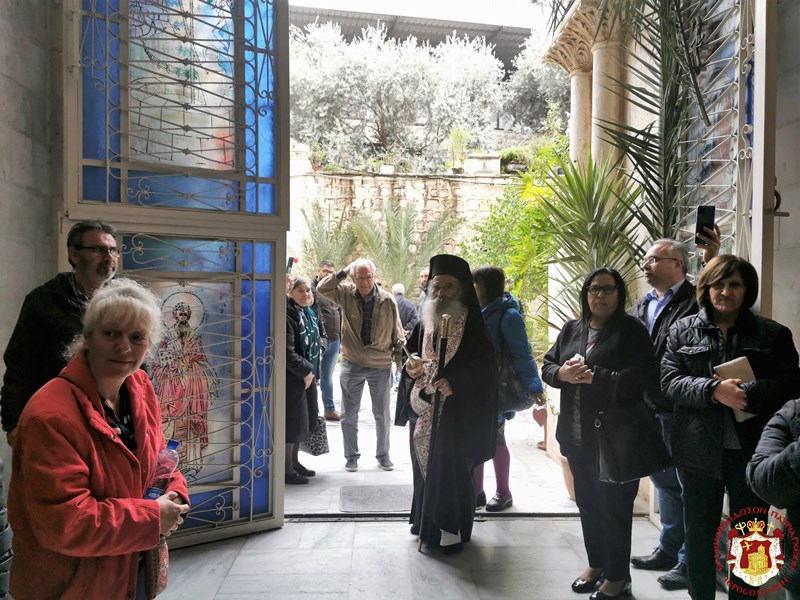 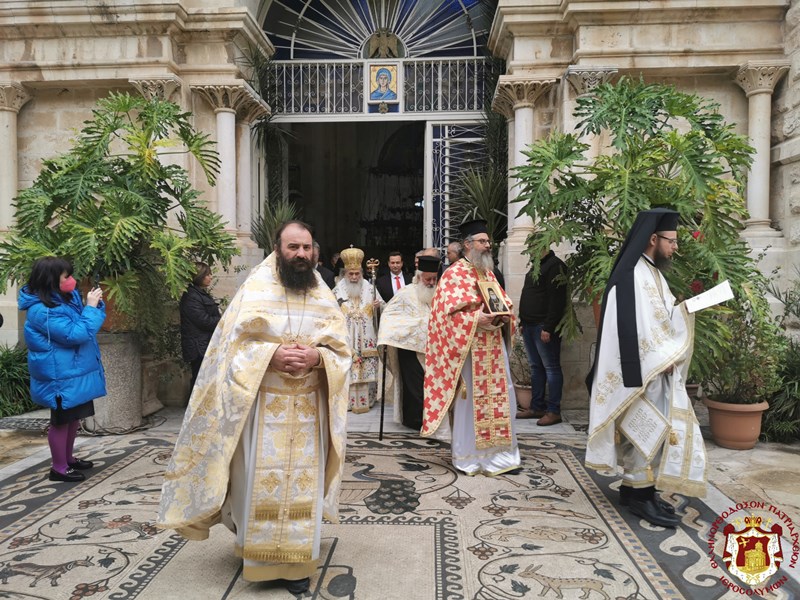 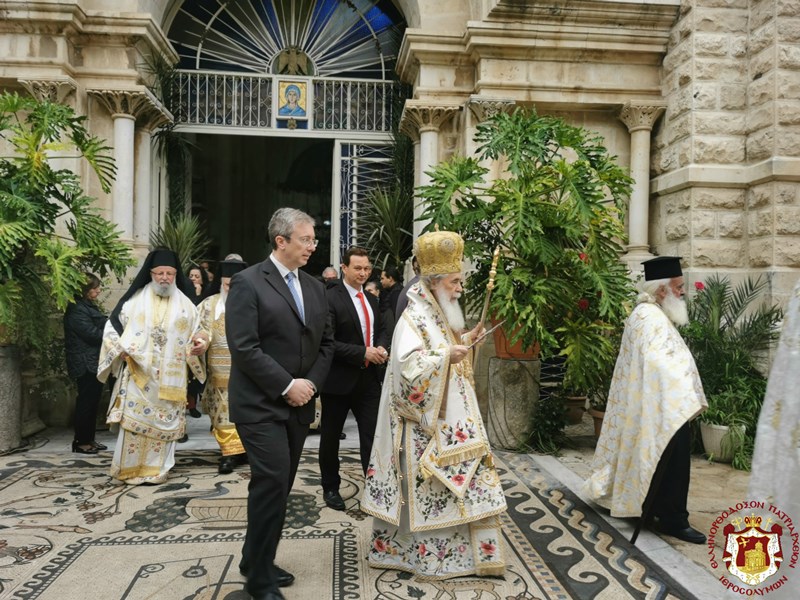 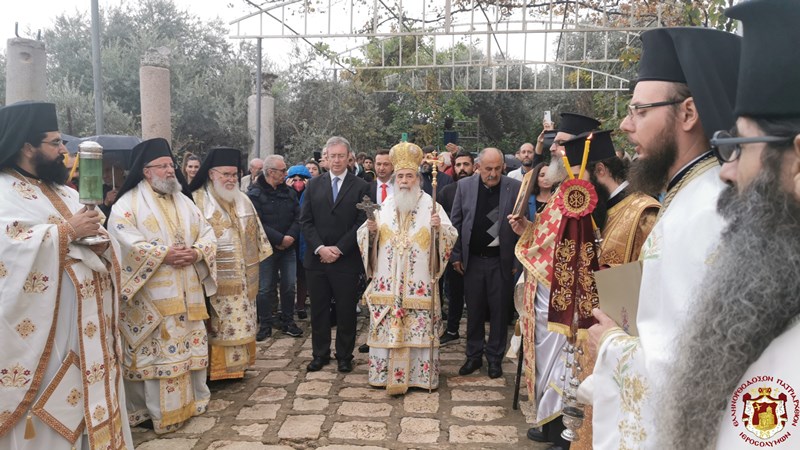 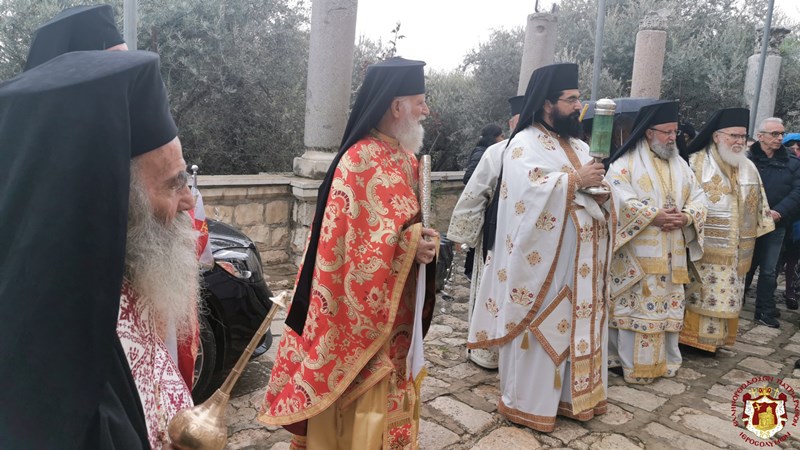 A fanatical man never has peace of mind