On Friday 8/21 January 2022, the Patriarchate celebrated the feast of the Holy Monastery of Hozeva, which is the commemoration of its founders, Saints John and George the Hozevites.

Saint John was a pillar and beacon of the Monastery, who came from Caesarea of Palestine, while Saint George came from Cyprus and rebuilt the Monastery after the total destruction by the Persian raid in AD 614, thus drawing to it a great number of monks and a multitude of Christians.

For their commemoration, the current Hegoumen and renovator of the Monastery, who has also restored its function as a Coenobium, Archimandrite Constantine, received the Patriarch of Jerusalem Theophilos with the following address:

With Your reverend Entourage

The holy founders of the Hozeva Lavra, John and George lived in ascesis here, not at the same time but each according to his Fathers, in honesty, integrity, love and peace. To speak plainly, they lived in union and oneness. These are virtues for which Saint Makarios of Egypt notes:

“In this manner, a lot of unanimity and peace and concord in the bond of peace can sustain each other, and live with one another in integrity and simplicity and prosperity of God” (Saint Makarios of Egypt Vol.41, Hom. 3, 21,31, p.156).

And how much coveted such unity and solidarity and sympathy in our Holy Orthodox Church is becoming nowadays, Your Beatitude, Father and Master!

We wish that by the prayers of the Saints John and George and Your Beatitude’s this unity will prevail in the end. Amen!

As Your sons, we welcome Your Beatitude wishing you a Happy Feast!”

An All-night Vigil followed, officiated by Patriarch of Jerusalem Theophilos, with the co-celebration of the Archbishop Aristarchos of Constantina and Metropolitan Joachim of Helenoupolis, the Hieromonk of the Monastery Fr Chrysogonos, Archdeacon Mark and Hierodeacon Eulogios, as the chanting was delivered by Hierodeacon Simeon and Monks Clement and Daniel. The service was attended only by a few monks due to covid restrictions.

Before the Holy Communion the Partriarch of Jerusalem delivered the following Sermon:

“Moses and Aaron among his priests, and Samuel among them that call upon his name; they called upon the Lord, and he answered them. He spake unto them in the cloudy pillar: they kept his testimonies, and the ordinance that he gave them” (Psalm 99:6-7) the Psalmist says.

The Holy Spirit who came down in the form of the dove in the river Jordan at the baptism of Jesus Christ and Son of God has gathered us in this holy Monastery of Hozeva to honour the sacred memory of our Holy Father George the Hozevite.

Joyful was the previous feast of Theophany of our Lord Jesus Christ, glorious is the present day of the Saints of God, and this because “God is marvellous in His saints” (Psalm 68:36) according to the psalmist.

Blessed George paid heed to the psalmist words: “I awaited Thy salvation, O Lord, and Thy commandments have I loved. My soul hath kept Thy testimonies and hath loved them exceedingly. I have kept Thy commandments and Thy testimonies, for all my ways are before Thee, O Lord” (Psalm 118: 166-168), and “I have longed for Thy salvation, O Lord, and Thy law is my meditation” (Psalm 118:174). He abandoned the place of his birth, Cyprus, and came to the place of the redeeming mystery of the divine providence; the place of the nativity, crucifixion and three-day burial and resurrection of our Saviour Christ, as his hymnographer says: “Sore didst thou desire to see and to worship the Tomb of Him Whoever is, O wise George; and coming thereto, thou didst deem it a holy thing to die through asceticism with Him that was slain for His compassion’s sake” (Matins, Ode 7 Troparion 3).

In other words, blessed George sought the “immaculate and painless” life of Christ’s friends, namely the continuing city of the Kingdom of Heaven (Hebrews 13:14). He sought to put on Christ, “dwelling in the light which no man can approach unto” (1 Tim. 6:16), that is why he came to the Jordan desert, to be baptized in the Holy Spirit, according to Saint Paul’s preaching: “For as many of you as have been baptized into Christ have put on Christ” (Gal. 3:27).

In interpreting these words of Paul, Saint Photios says: “We put on Christ and the Holy Spirit, not as a garment that surrounds us exteriorly, but in a manner that we fill our heart and mind with light and grace”. The one who has filled his heart with the light and grace becomes a saint, according to the Holy One who has called us, and you have been born into holiness, because it is written: “But as he which hath called you is holy, so be ye holy in all manner of conversation; Because it is written, Be ye holy; for I am holy” (1 Peter 1:15-16), Saint Peter preaches, referencing the book of Leviticus (Lev. 11:44) and the urging of our Lord Jesus Christ “Be ye therefore perfect, even as your Father which is in heaven is perfect” (Matt. 5:48).

It is noteworthy though, that the words “be ye holy and perfect” do not refer to the essence of God but to the good works and actions and to all virtues in general. “For we are not able to become similar to the essence of God, but we can only imitate God by improving in virtues”, Saint Athanasios the Great says. “To become strangers to every malice as much as it can be possible, in both words and actions and in thought, cleansing yourselves from the impurity of malice, this is a true imitation of the divine perfection”, Saint Gregory of Nyssa says.

Of this divine perfection and holiness did Saint George become an imitator through his ascetic striving, like another John the Baptist in the Jordan desert, in Hozeva, preaching by his own example the utmost humility of Christ and His perfect love. This is also testified by his hymnographer: “The Monastery of Hozeva hath found in thee a rule and most exact example for the pursuit of every form of virtuous works, O wise George, boast of the righteous. Therefore, those who have passed their lives in godliness leap for joy with thee unto the ages” (Matins, Ode 8, Troparion 3).

Indeed, my dear brethren, Saint George became the modest ornament of the monastics and his Monastery of Hozeva a place of sanctification and confession of his commemoration (Psalm 30:4) according to the psalmist, where the light and truth of Christ, Who was baptised in the Jordan led a multitude of righteous and saints, among whom is Saint John from Caesarea, who also lived in ascesis here, and Saint John the New from Romania, whose incorrupt and fragrant relic confesses the faith of the fishermen Apostles and testifies the luminous Resurrection of Christ; the victory of Christ’s death over the death of corruption and sin.

Let us pray to our Lord and Saviour Jesus Christ, so that we who celebrate the commemoration of Saint George, may gain the redeeming light of Christ’s glory. And let us say along with the hymnographer: “With one accord, let us faithful laud with hymns God the Word, Who came forth from God, and Who ineffably took on flesh from a pure Virgin for us and in wisdom past telling descended to make Adam new again, who by eating fell grievously down into corruption’s pits” (Matins, Ode9, Heirmos). Amen. Many happy returns!”

After dismissal, the Hegoumen Archimandrite Constantine hosted a monastic meal.

On Saturday 9/22 January 2022 the Divine Liturgy was celebrated at the Monastery of the recently discovered Cemetery of the Hozevite holy martyrs. The church was built in their memory by the current Hegoumen Archimandrite Constantine. The icon of the holy martyrs is posted below with the chapel on the background. 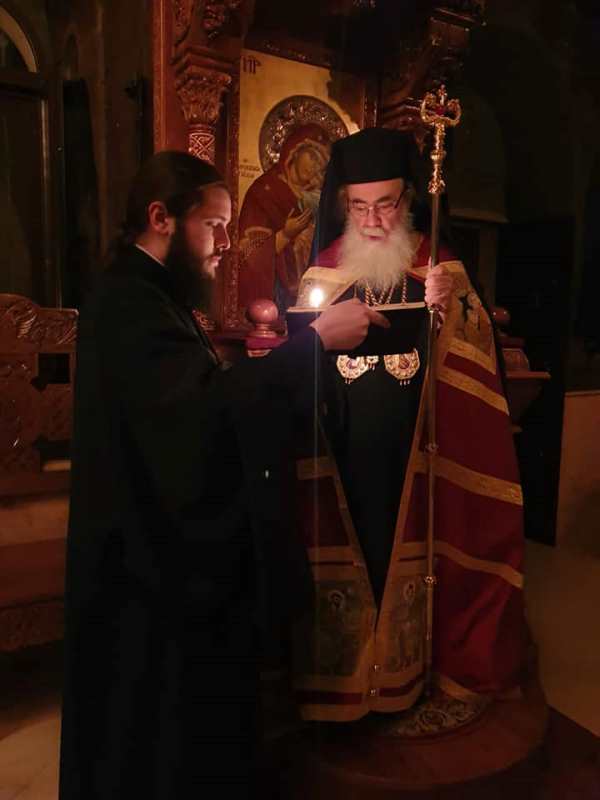 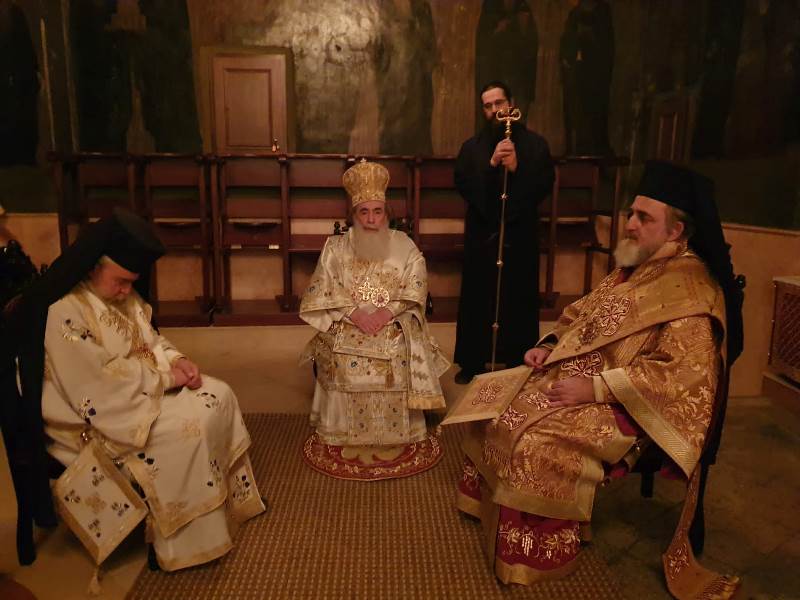 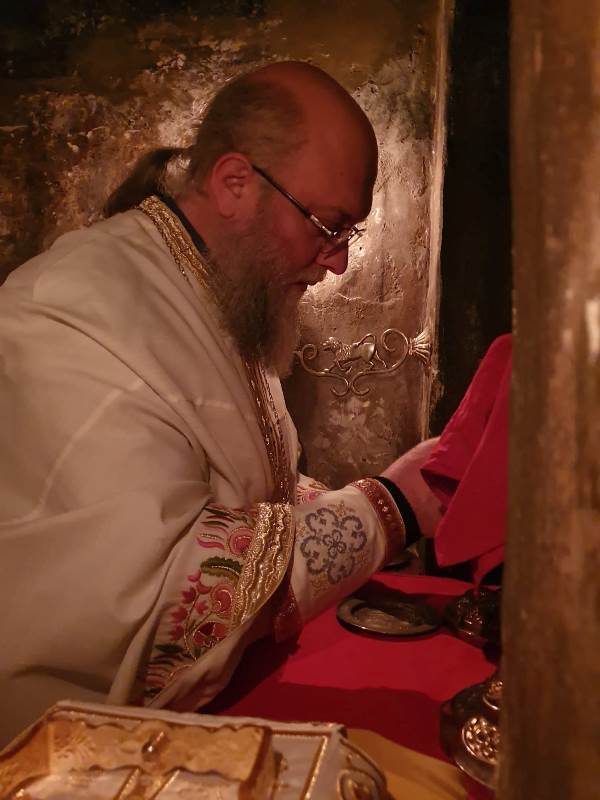 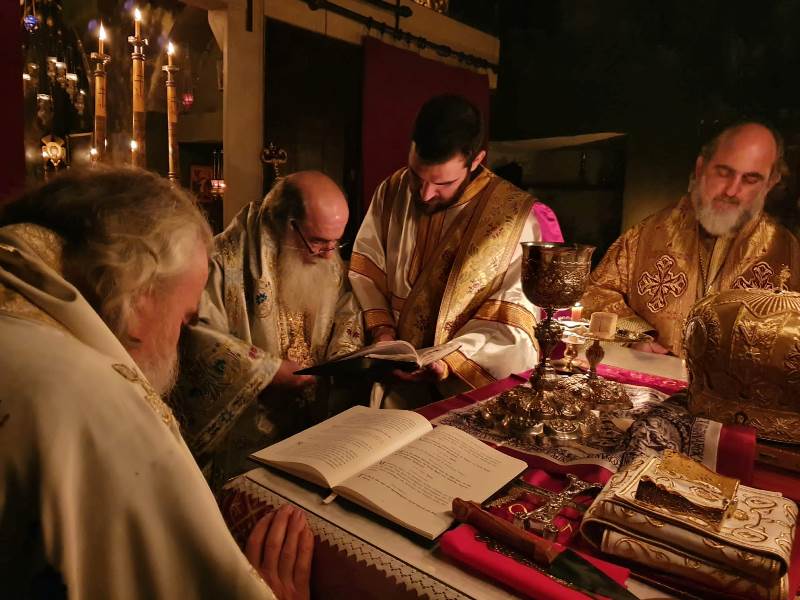 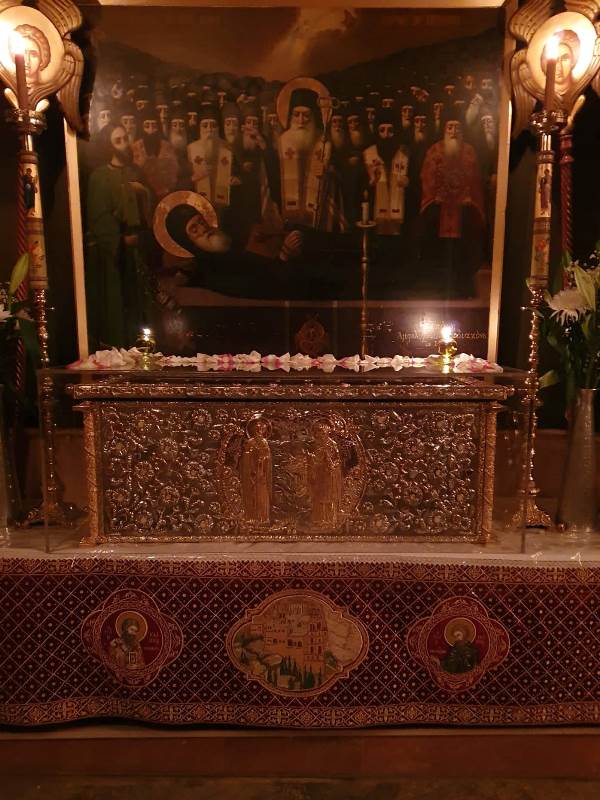 Archbishop of America: We affirm the gift and sanctity of life and our respect for the autonomy of women