On Tuesday, September 27, 2022, the feast of the Exaltation of the Holy Cross was celebrated by the Patriarchate of Jerusalem.

On this holiday, the Church has primarily the commemoration of the Lord Jesus Christ raised on the Cross for our salvation, but also the memory of the elevation of the wood of the cross, when it was found under Saint Helen and raised by the Archbishop of Jerusalem Makarios in sight and worship of the pilgrims and thousands of pilgrims for the Consecration ceremony of the Church of the Resurrection.

This world-historical event was celebrated with Vespers in the evening and with a Divine Liturgy on the morning of the feast in the Catholicon of the Church of the Resurrection.

Great Vespers and the Divine Liturgy were officiated by Patriarch Theophilos of Jerusalem. Co-celebrants to the Patriarch for the Divine Liturgy were their Eminences; the Metropolitans Isychios of Kapitolias and Timotheos of Bosra, Panteleimon of Xanthi and Peritheorion – visiting from Greece –, Panteleimon of Maronia and Komotini, the Archbishops, Theophanes of Gerassa, Aristarchos of Constantina, Methodios of Tabor, Theodosios of Sebasteia, Demetrios of Lydda, Nectarios of Anthedona, Bishop Parthenios from the Church of Achrida, the Elder Kamarasis Archimandrite Nectarios, the ministering Priest of the Russian speaking Community of the Patriarchate in Ein Karem Archimandrite Nikolai and Ioannis from the Church of Romania and other priests from many Orthodox countries.

The chanting was delivered by Hierodeacon Simeon and Mr Gotsopoulos with the Patriarchal School students. Both services were attended by the Consul General of Greece in Jerusalem Mr Evangelos Vlioras and a very large congregation of pilgrims.

The Divine Liturgy was followed by the exaltation of the Holy Cross according to the following formality:

From the Holy Gate of the Catholicon of the Church, His Beatitude blessed the Holy Entrance and the procession was led by H.H.B., with the participation of Archpriests, Priests and deacons, the people following in front of the Sacred Edicule on the right and through the Seven Arches it went to the chapel of Saint Helen. From there it went down to the Cave after the incense offering at the Altar of the Armenians and the Throne of Saint Helen. At the Cave of the Finding of the Sacred Wood, the exaltation of the Cross was held according to the Typikon of the Church and the apolytikion “God save thy people” was chanted three times before the placement of the Cross at the point of its finding and it was exalted at the four parts of the horizon. The Troparia of the feast were chanted and from there, the litany went out, passing through the Seven Arches, marching three times around the Holy Sepulchre, the Sacred Wood bearing on the heads of the High Priests, and concluded to the Horrendous Golgotha.

There, the Holy Cross was once again raised by His Beatitude to the four points of the horizon for the sanctification of the faithful and of the whole creation.

After the Exaltation ceremony was completed, the Holy Cross was placed on the Holy Table of Golgotha ​​and the Bishops and the Consul General of Greece venerated it and the faithful received the flowers of the Holy Cross for their sanctification in thanksgiving and praise to God.

After the ceremony was over, the full congregation went to the Patriarchate Reception Hall, where a fasting feast was served, and His Beatitude spoke with the following address:

“The cross is a trophy for Christ; it was set on the ground once and for all and the devils are always driven away by its force. Where are the killings of idols and animals in vain? Where are the temples and the fire of unbelief? Everything was extinguished by holy blood and fell. And the cross is a powerful force, an invisible arrow, an immaterial medicine, a luscious wound, a dazzling glory” Saint John of Damascus says.

Today the new tabernacle, the holy Church, which our Lord Jesus Christ made “paradise intelligible” celebrates the universal exaltation of the Holy and Life-Giving Cross, through which the extinguishing and falling of the tree of knowledge were accomplished.

The truly universal and blessed event was celebrated by the holy Church of Jerusalem, the participation of High Priests and priests of the brother Orthodox Churches and the presence of pious pilgrims, in a thanksgiving gathering at this place, where Saint Helen found the Cross, as well as at the place where the wood of the Cross was solidified, that is, on the Horrendous Golgotha, where He was crucified.

“A trophy for Christ, the cross … was always extinguished by a holy blood and fell,” Saint John of Damascus preaches. And this, because the Son and Word of God, Who, being in the form of God, thought it not robbery to be equal with God: But made himself of no reputation, and took upon him the form of a servant, and was made in the likeness of men: And being found in fashion as a man, he humbled himself and became obedient unto death, even the death of the cross. Wherefore God also hath highly exalted him and given him a name which is above every name (Philip 2,6-9), according to Saint Paul.

Through His humiliation unto death, death and the cross, “Christ freed us from the law of sin and the death of corruption” (Cf. Rom. 8:2). So here is the omnipotent power, the weapon against the devil, the immaterial medicine and the astonishing glory but also the beauty of the Church, which is founded on the sacrificial and crucified blood of Christ. Because of this, the Cross of Christ is the inexhaustible source of the power of the Church.

On the Cross and through the Cross our Lord Jesus Christ defeated the devil and provided our souls with His Peace. He is “the God of love and peace” (2 Cor. 13:11). Through His blood on the Cross, Christ made peace on earth and in heaven (cf. Col. 1:20), the wise Paul preaches again.

The exaltation of the Holy and life-giving Cross, that is, of Christ, calls us, my beloved brothers, as faithful members of His body, to fight on the one hand against our personal passions and on the other hand for the restoration of the broken unity of the one Holy Catholic Church and of the Apostolic Orthodox Church, listening to the commandment of blessed Paul, “studying to keep the unity of the Spirit in the bond of peace”, (Eph. 4,3)

After the hymn, we say: “Today the Cross is lifted up and all the world is sanctified. For Thou, while throned with the Father and with the All-holy Spirit, by stretching out Thy hands thereon, hast drawn the whole world to Thyself, that it might know Thee, O my Christ. Therefore, vouchsafe divine glory to them that trust Thy goodness” and grant peace in our region and in the whole world. (Matins, Exapostelaria). Many and peaceful returns. Amen.” 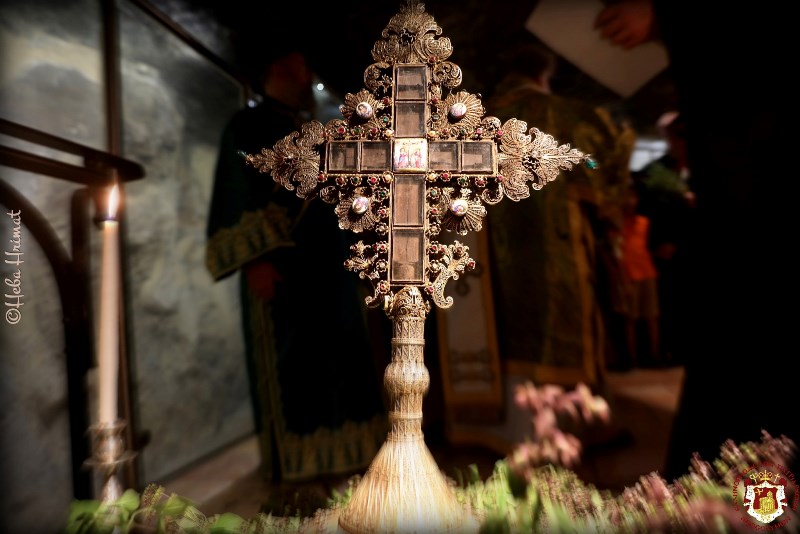 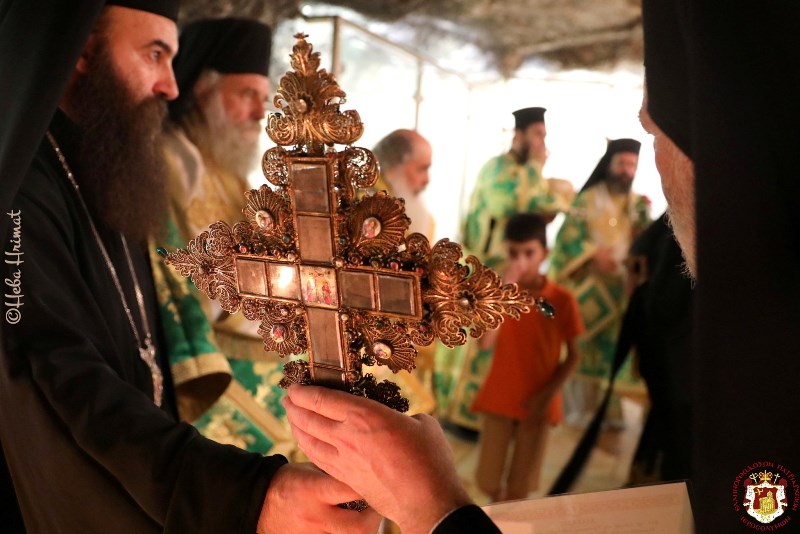 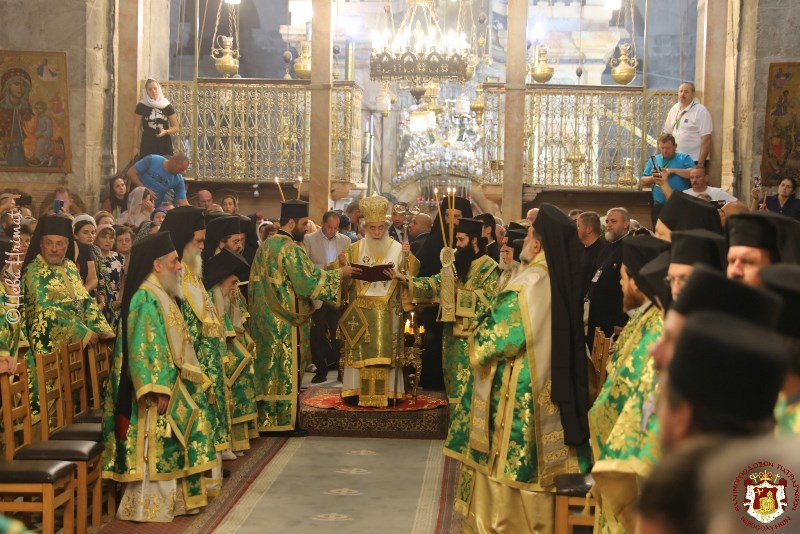 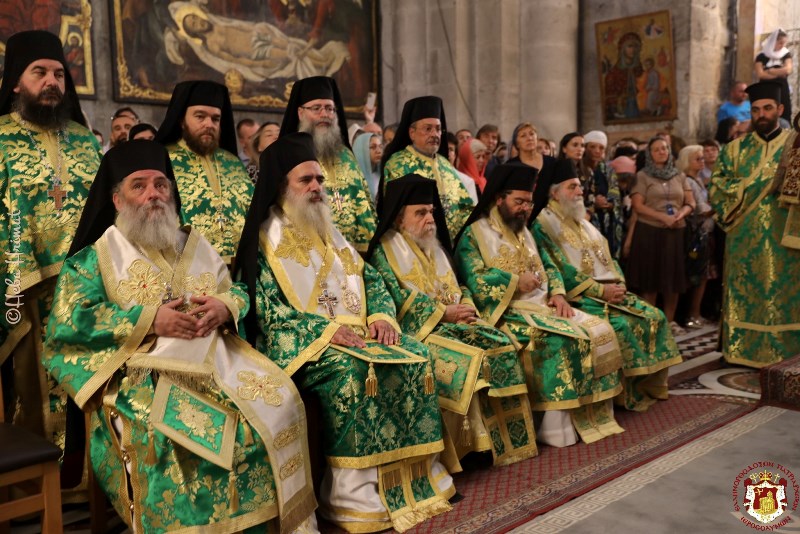 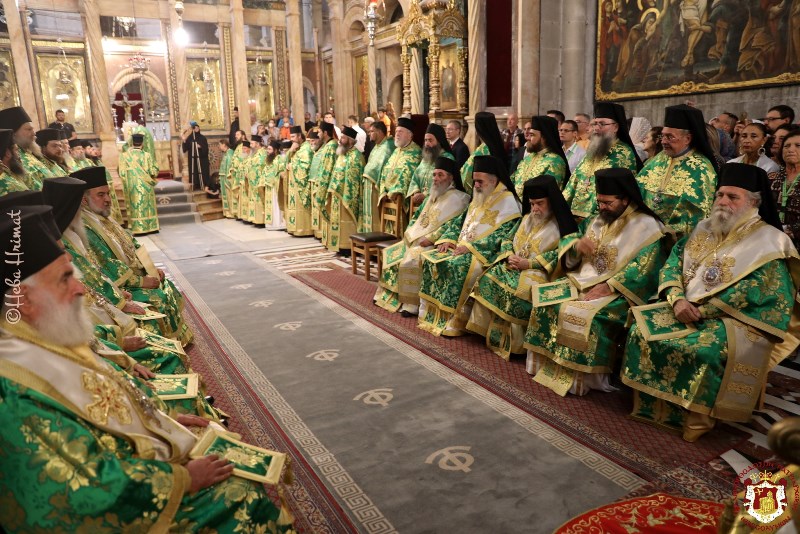 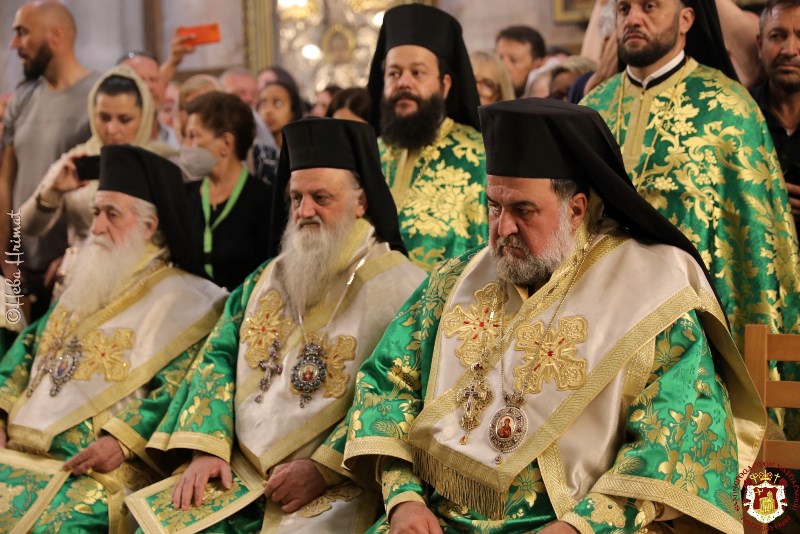 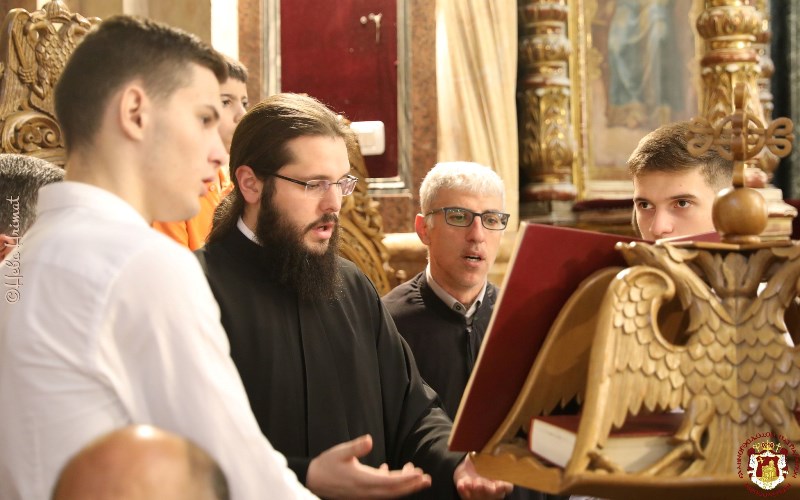 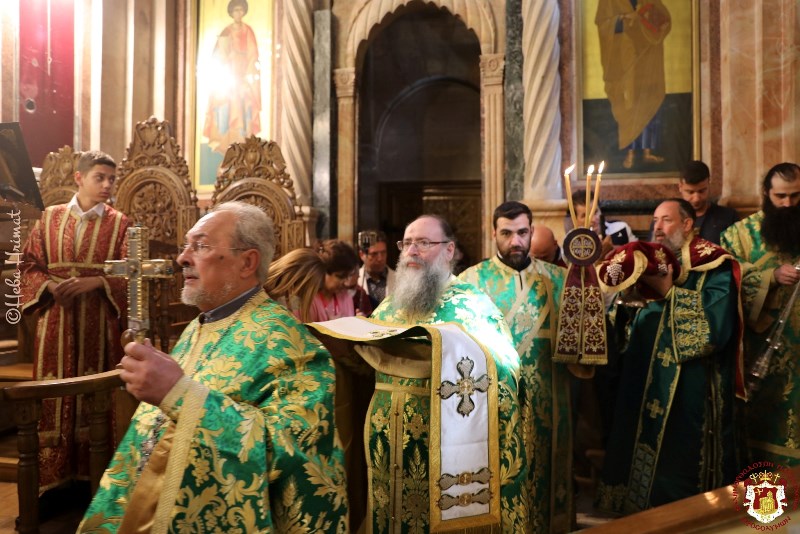 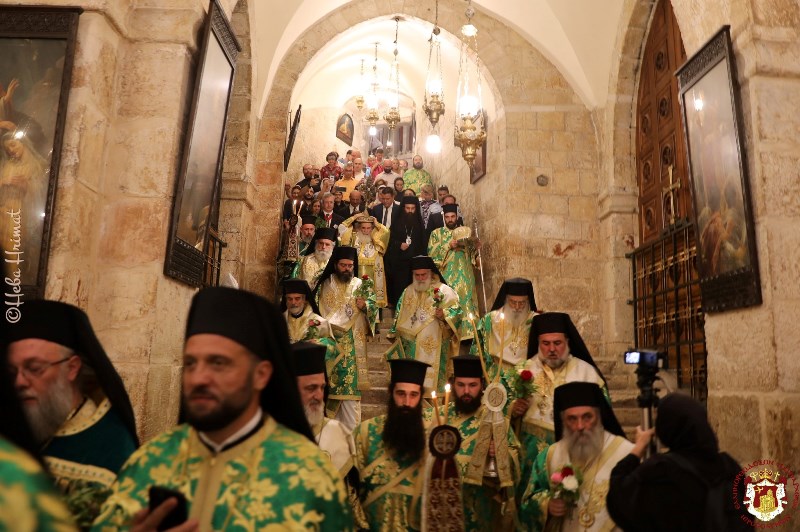 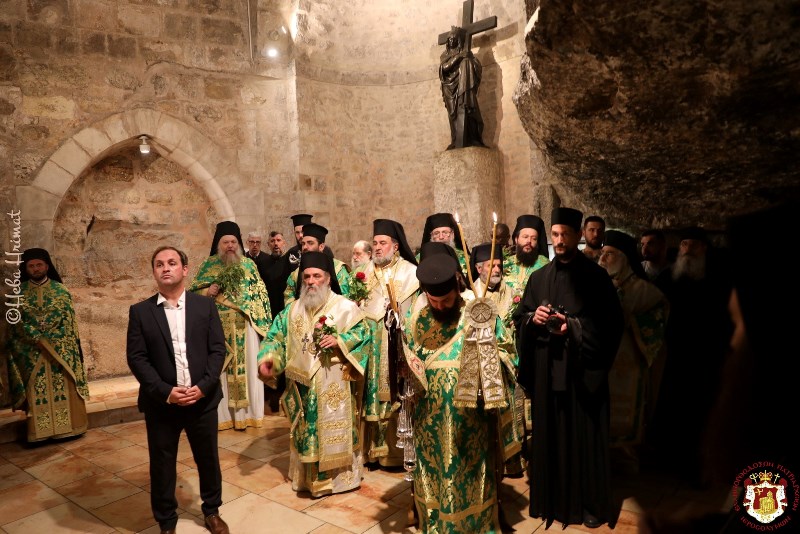 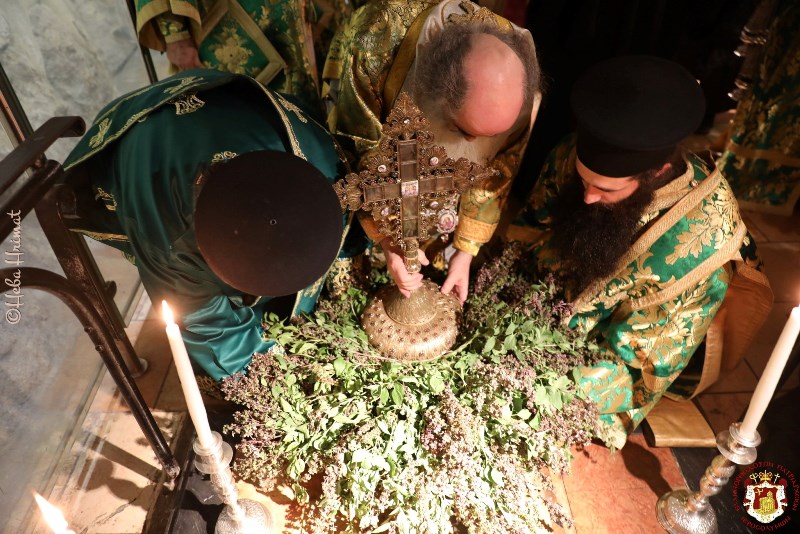 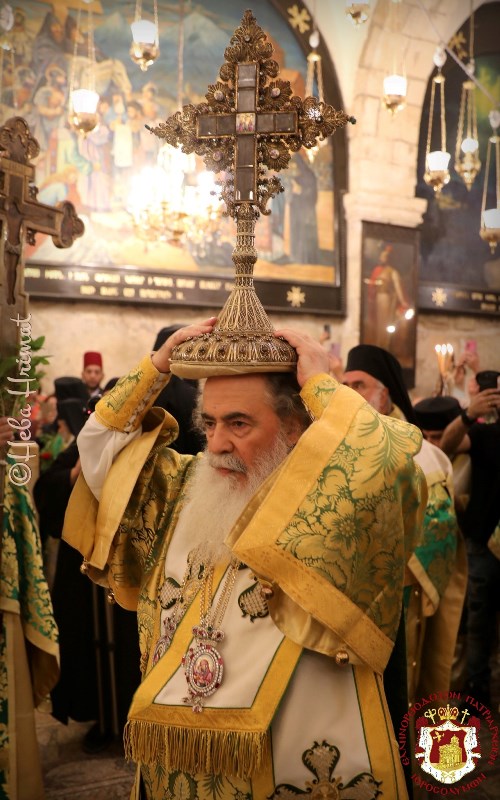 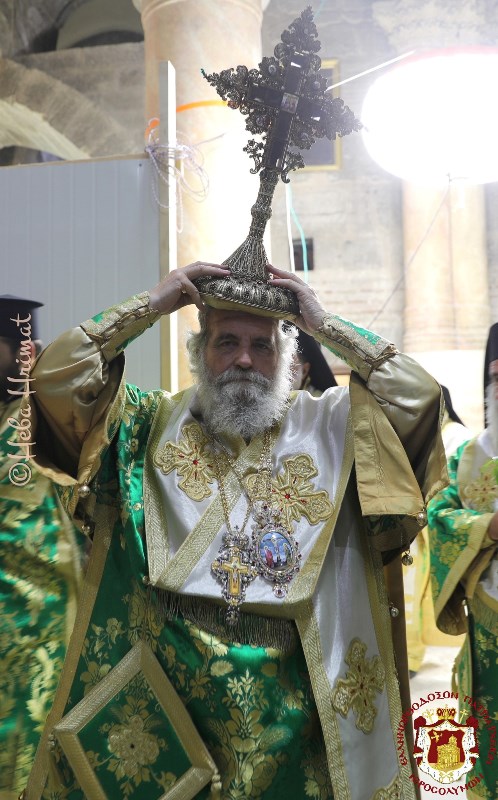 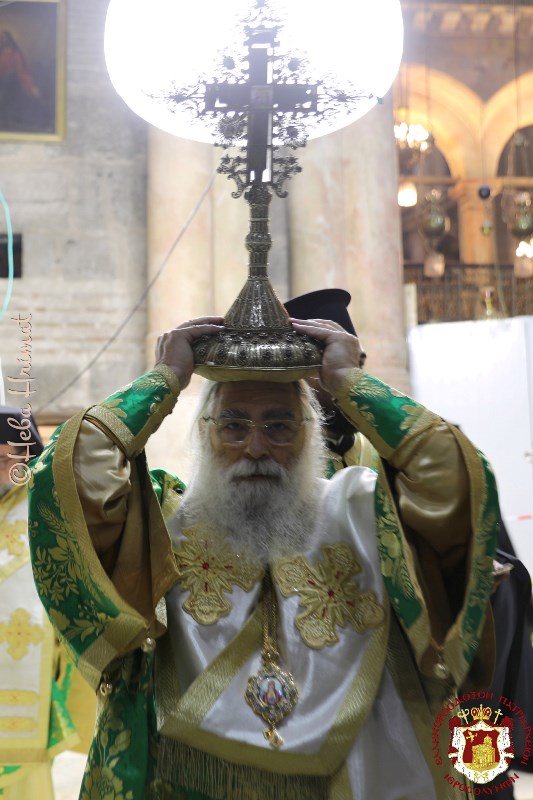 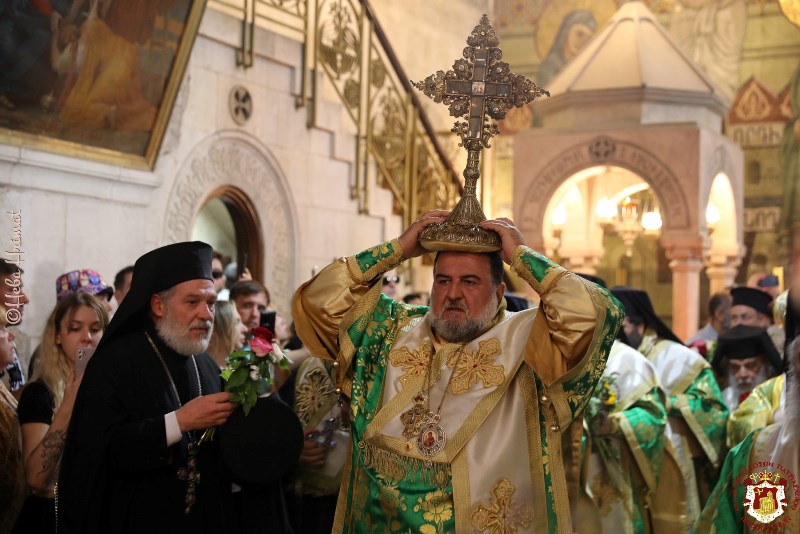 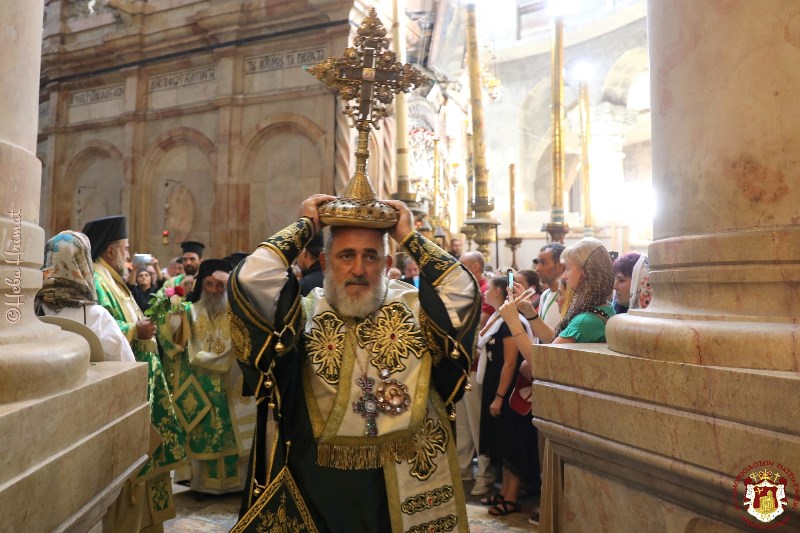 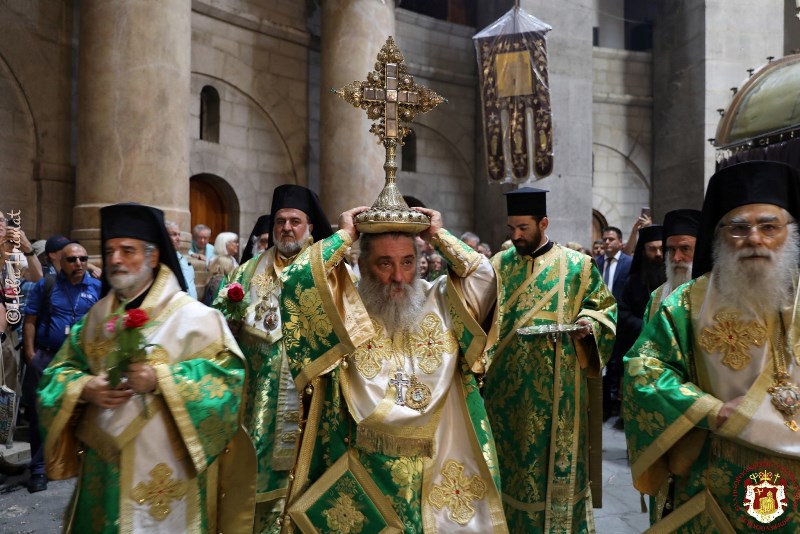 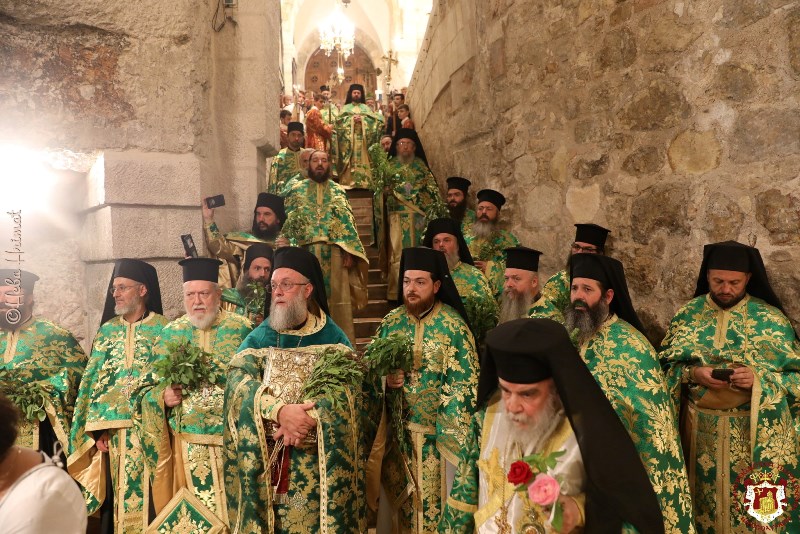 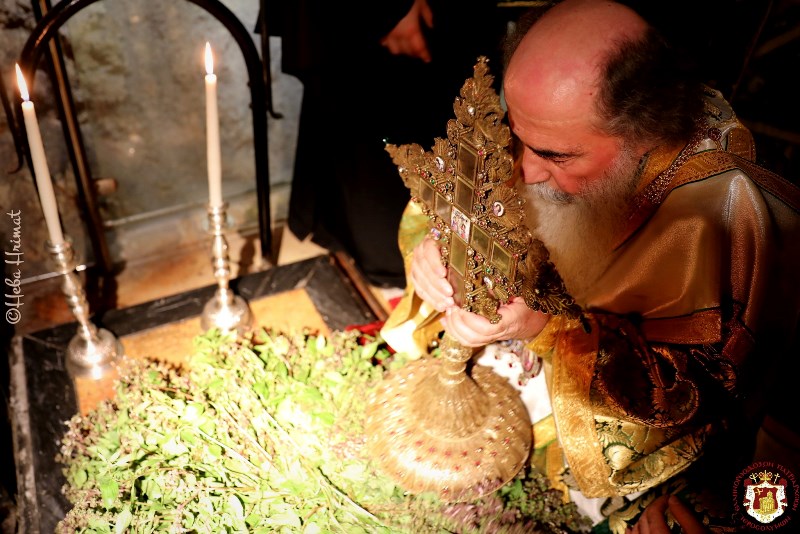 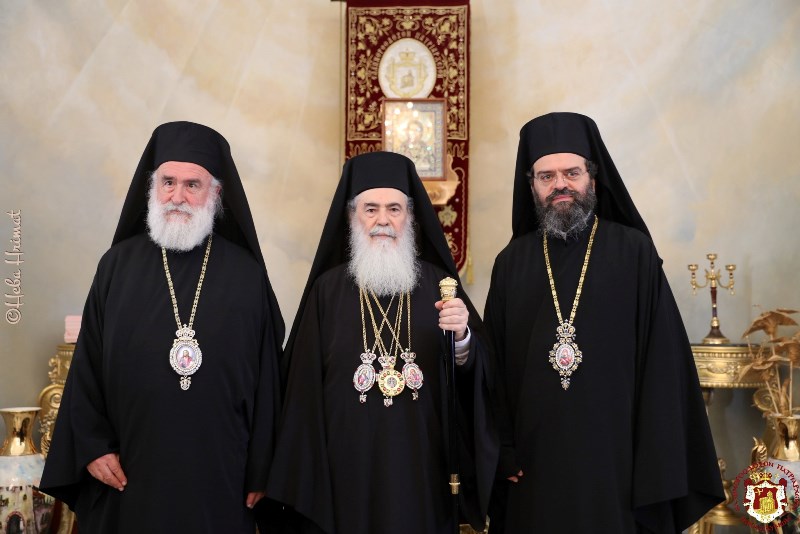