On Sunday, August 28, 2022, the Patriarchate of Jerusalem celebrated the feast of the Dormition of the Theotokos, that is, of her Ascension into heaven by her Son, who from His right-hand remains in perpetuity for the sake of the Church and of all humanity, always reaching ” of all those who are in harsh circumstances, in sorrow and in need”.

This feast was celebrated in the Gethsemane Church of the Dormition and in the Theotokos Tomb with a Divine Liturgy.

This Liturgy was presided over by Patriarch Theophilos of Jerusalem, with the co-celebration of Metropolitan Isychios of Kapitolias, Metropolitan Timotheos of Bosra, the Archbishops, Aristarchos of Constantina, and Makarios of Katar, the ministering Priests of the shrine, Archimandrites Meletios and Dionysios, Arabic-speaking Elders and priests of other Orthodox Churches, of the Patriarchate of Moscow and Romania. The chanting was delivered by Hierodeacon Simeon and a visiting Byzantine choir from Greece, under Mr. Ioannis Plevritis. The Liturgy was attended by the Consul General of Greece in Jerusalem Mr. Evangelos Vlioras and a large congregation of faithful Christians, coming from the occupied territories and pilgrims from Greece, Cyprus, Romania, and foreign countries.

Before the Holy Communion Patriarch Theofilos of Jerusalem delivered the following Sermon:

“The Most High hath hallowed His tabernacle” (Psalm 45,5). “The mountain of God is a butter mountain, a curdled mountain, this is the mountain wherein God is pleased to dwell”, (Psalm 67, 16-17), exclaims the praiser of the blessed Theotokos Saint John of Damascus, invoking the psalmist.

We, as the other Apostles, gathered here, in the village of Gethsemane, to honor the memory of the venerable metastasis of our most glorious Lady Theotokos and ever-Virgin Mary, but also to venerate her Sacred Tomb.

“How the source of life is transferred to life, passing through death! How she who in her birth overcame the limits of nature now submits to its laws and submits to death the immortal body. For this [the body] must lay off mortality and put on incorruptibility, because the Lord [the sovereign] of nature did not refuse to submit to death. He perishes according to the flesh and with death He abolishes death and with corruption, He grants us incorruptibility and makes His death the source of the Resurrection”, St. John of Damascus exclaims with admiration.

Indeed, the Virgin Mary was shown to be the source, that is, the Mother of life, and Life, in this case, is Christ according to his word: “I am the resurrection and the life” (John 11:25), “I give thee life eternal” (John 10:28). And according to the testimony of Saint John the Apostle and Evangelist, he who is united by faith to the Son of God and has Him as his own, has the true and eternal life. “He who has the Son has life” (John 5:12). How much more “has the life of the eternally gracious and blessed in women Mary (Lk. 1,25), from whose pure blood the Son of God became incarnate through the Holy Spirit and her Son.

Today the Holy Church of Christ solemnly celebrates a paradoxical miracle in Gethsemane where “the source of life”, according to the hymn, “is placed in a monument, and the tomb becomes a stairway to heaven”. Today the Theotokos and Mother of God, the exalted throne of the Most High moved from earth to heaven. “For through her the salvation of all mortals hath come. We have not the strength to look upon her, and it is not possible to render her worthy honor” (Glory of Vespers, grave tone). “Today she committeth her soul full of light, not the immaculate hands of Him that was incarnate of her without seed” (Entreaty, both now).

In other words, the Immaculate Virgin Mary is also the “living after death” and this is because her death was, on the one hand, a life-giving death, on the other hand, it introduced her to the glory and life indeed of her Only Begotten Son, ” He who is at the right hand of God, who also maketh intercession for us” (Rom. 8:34), according to the divine Paul. That is why she saves through her Son, the faithful people of God, as her hymnographer Saint Cosmas, says: “The bounds of nature are overcome in thee, O immaculate Virgin: for thy childbirth is virginal, and thy death is the espousal of life. O thou who after childbirth art virgin, and who after death art living, do thou, O Theotokos, ever save thine inheritance” (Katavasiae, Ode 9).

We, who honor her venerable Dormition, beseech the Ever-Virgin Mother of God, who has saved the human race torn from the ancestral decision [=sin], to intercede with her Son and God, the Lord, and our Jesus Christ, for the salvation of our souls. Amen. Many Happy returns!”

Many of the faithful received Holy Communion.

After the Divine Liturgy, His Eminence Metropolitan Joachim of Hellenoupolis hosted a reception treat in the hegoumeneion with fruit and refreshments.

In honor of the feast of the Dormition of the Theotokos, Divine Liturgies were held in the celebratory town of Abboud, by Archbishop Theodosios of Sebasteia and in Ain Arik, by Archbishop Philoumenos of Pella. 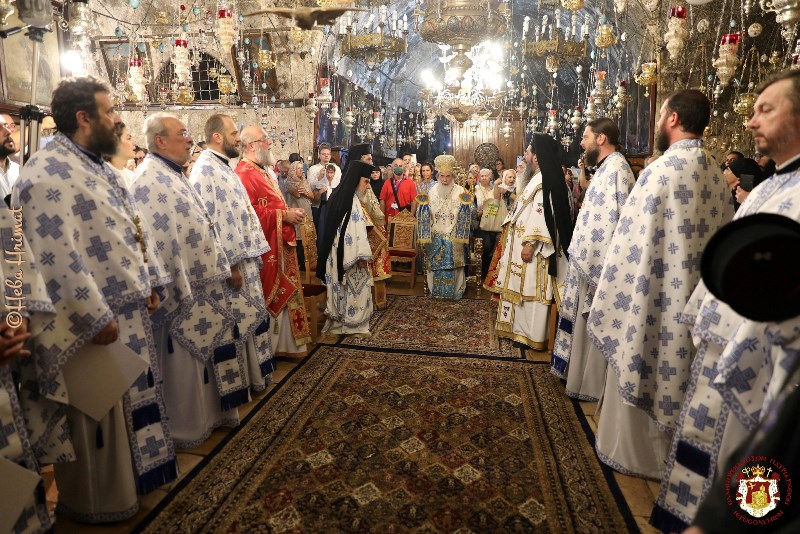 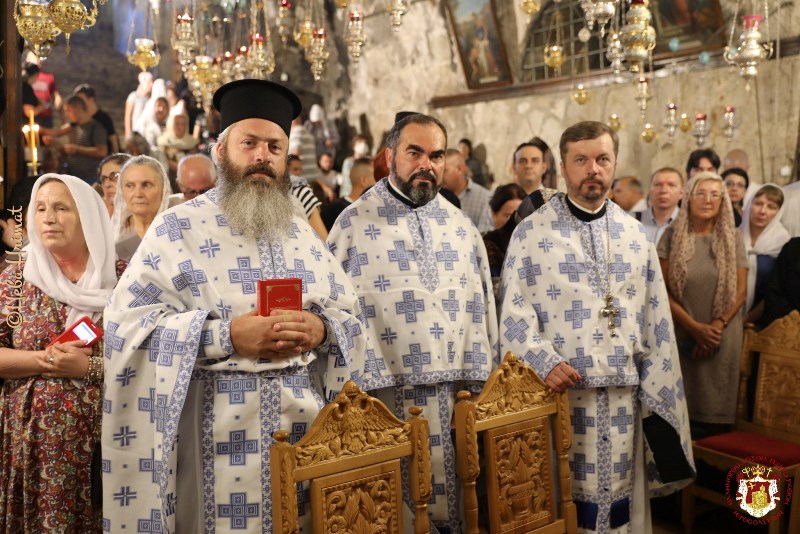 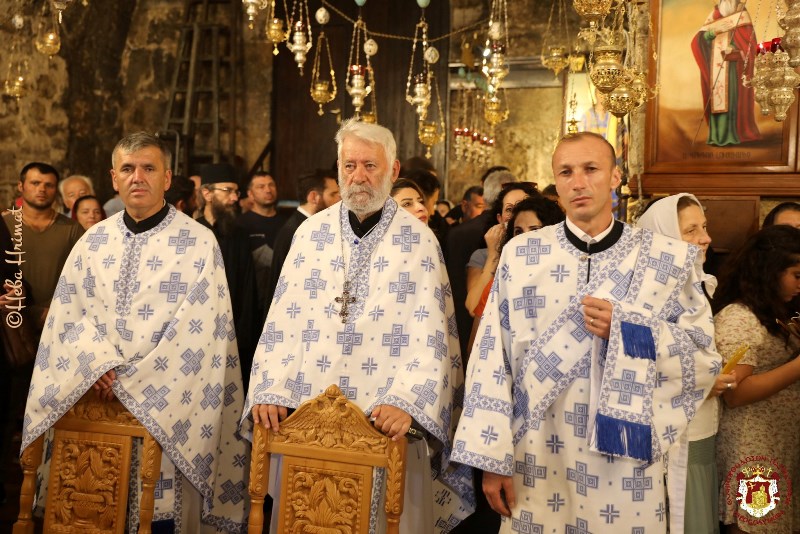 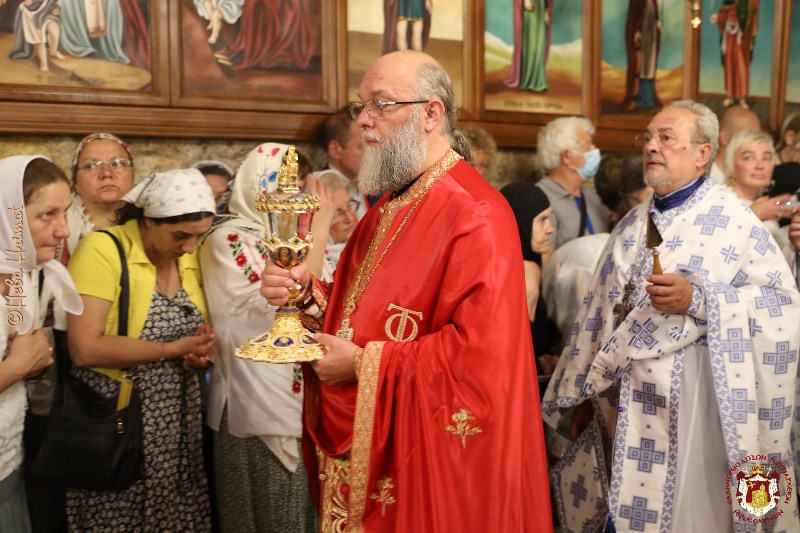 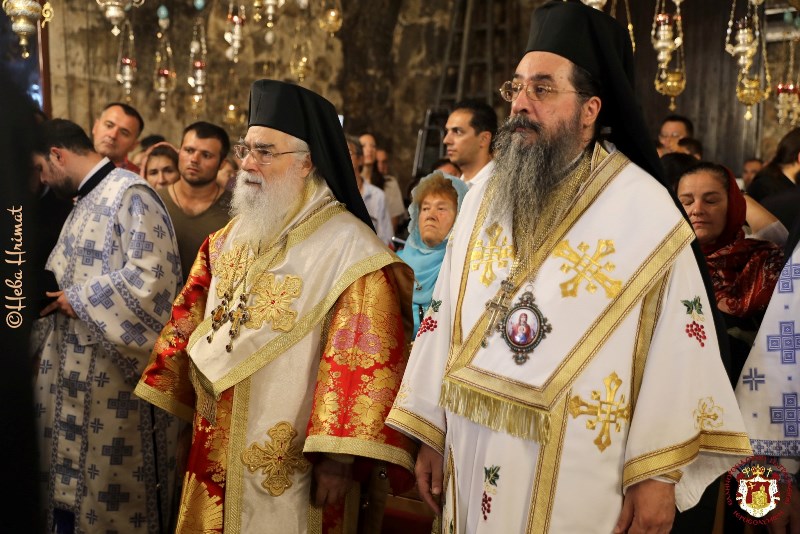 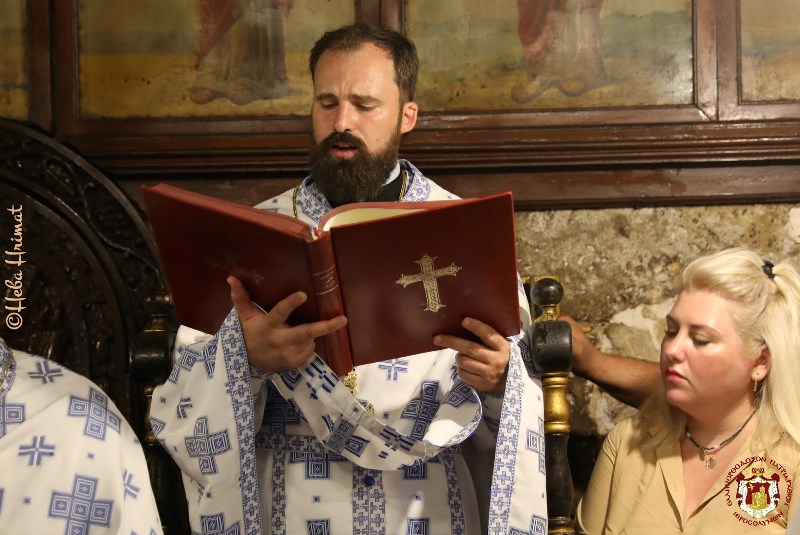 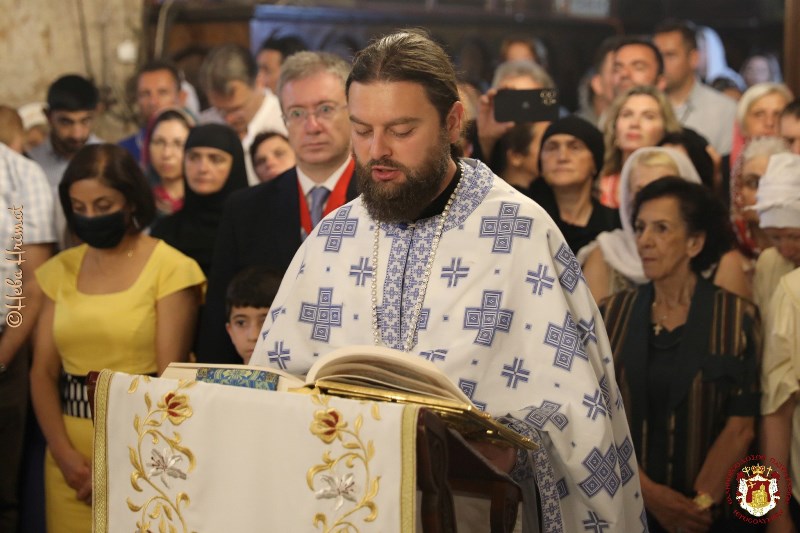 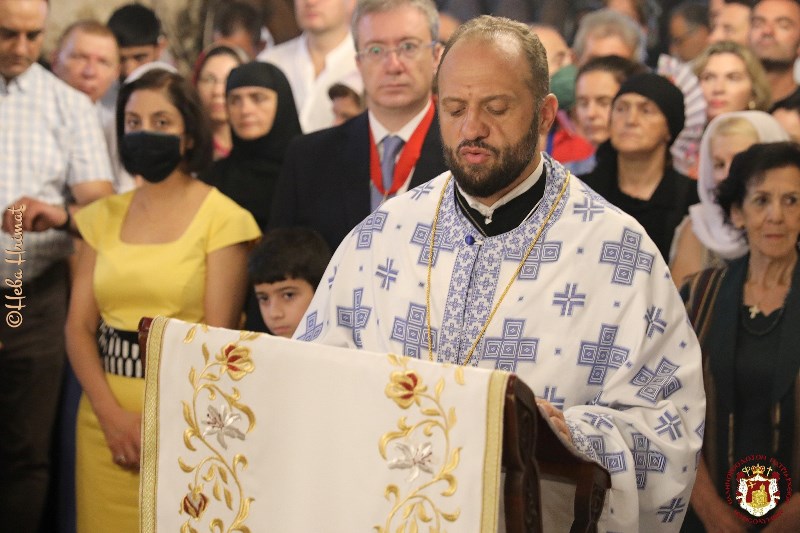 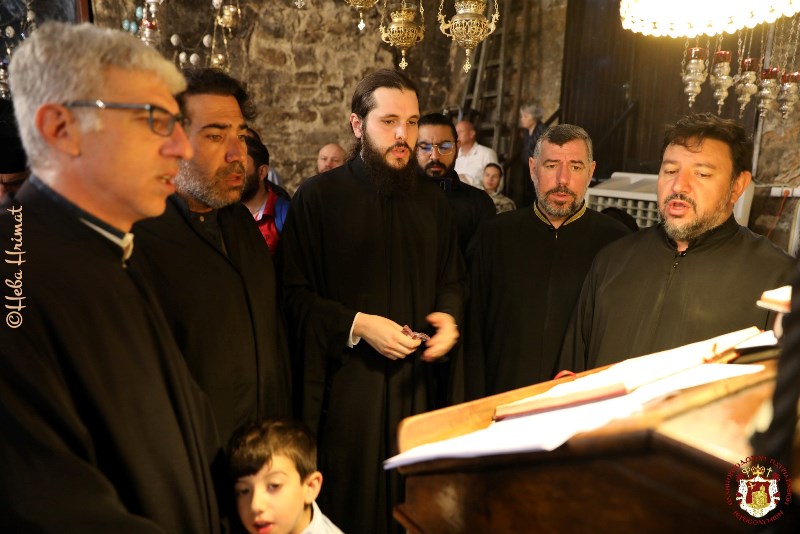 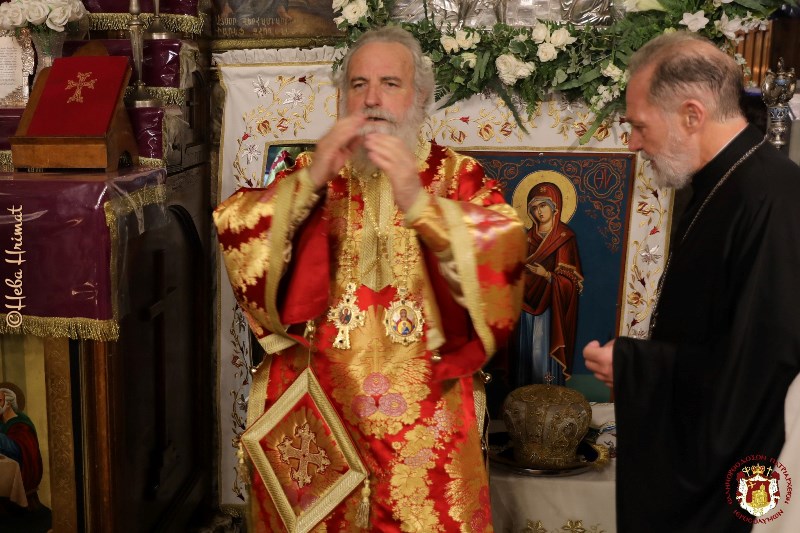 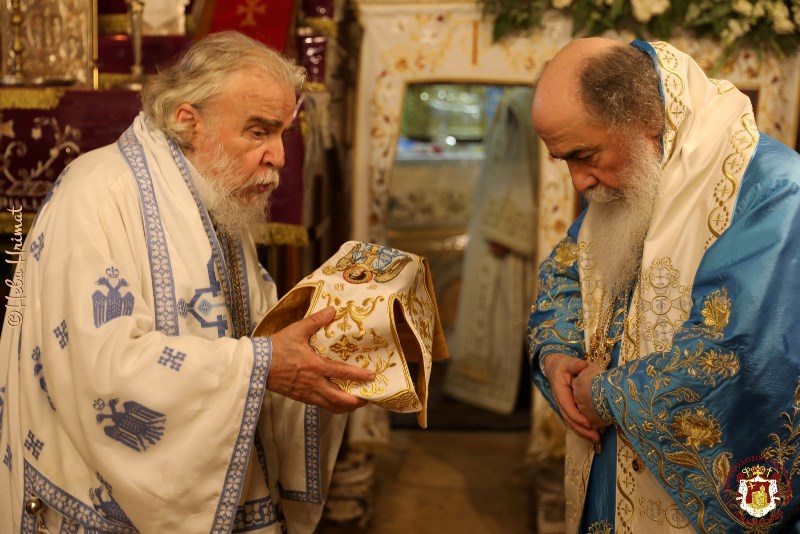 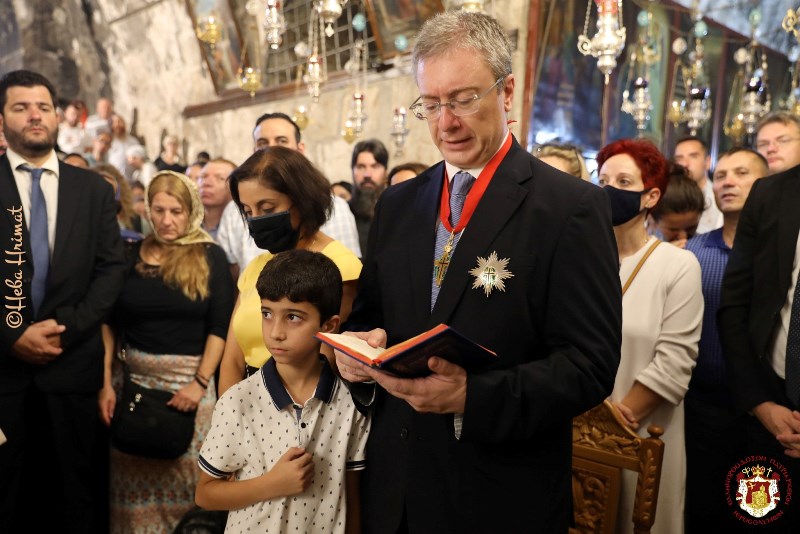 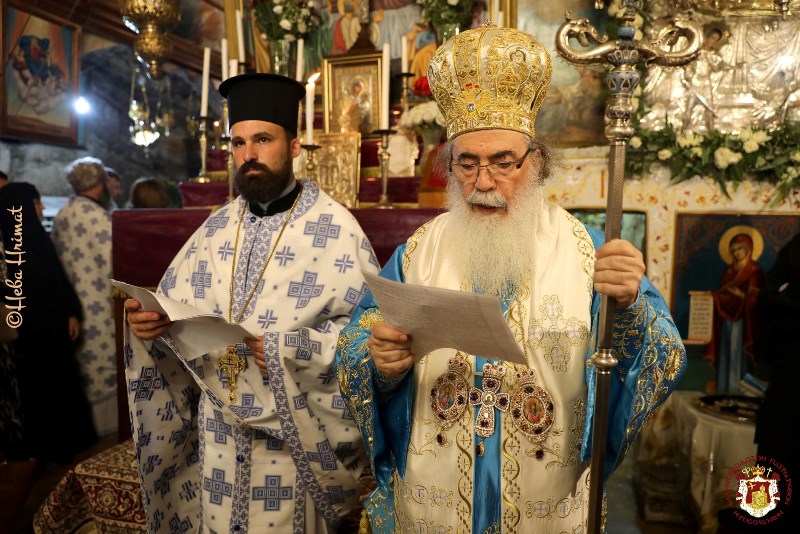 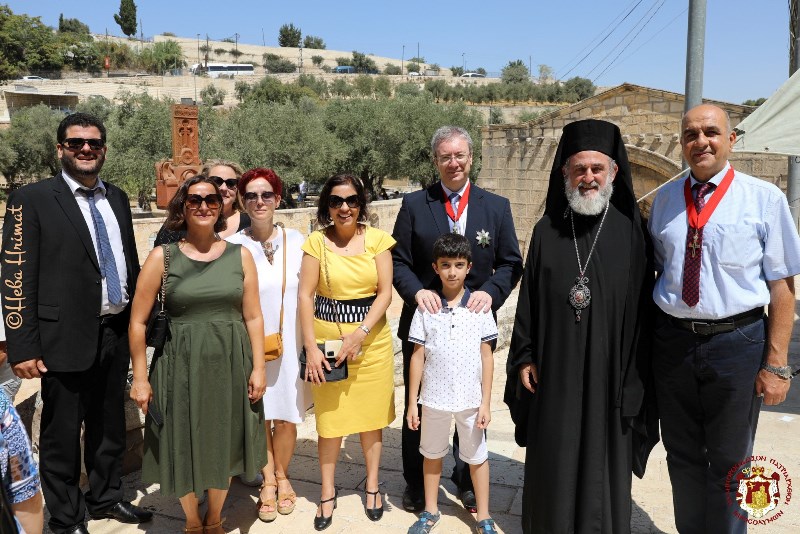 Only God knows the occult