With the blessing of His Eminence Archbishop Sotirios of Canada, the Archons in Canada organized a successful virtual event on Sunday, November 13, 2022, on the theme “A Day in the Life at the Ecumenical Patriarchate.”

The event’s special guest was the V. Rev. Grand Syncellus Iakovos (Krochak) who joined participants live from the Phanar.

Participants included Archons, Reverend Fathers from both the Archdiocese as well as the Ukrainian Orthodox Church in Canada, and community leaders.

Archbishop Sotirios was celebrating the 40th anniversary of the Community of St. John the Baptist in South Shore (Montreal) and thus not able to attend; however, he was formally represented by His Grace Bishop Iakovos of Zinoupolis.

The gathering, which began with the Lord’s Prayer led by Bishop Iakovos, had an added significance because it was celebrated on the Feast of St. John Chrysostom, Archbishop of Constantinople.

The event was moderated by Archon Evagelos Sotiropoulos and included informative and insightful commentary by Grand Syncellus Iakovos, who provided those in attendance with information about the day-to-day activities of the Ecumenical Patriarchate and life in Turkey, the tireless work and historic leadership of His All-Holiness Ecumenical Patriarch Bartholomew, as well as the roles and responsibilities of the First Throne of Orthodoxy.

It was a wonderful atmosphere and motivational event in advance of the Patronal Feast of St. Andrew the First-called Apostle on November 30th.

On behalf of its President, Archon Chrysostomos Perentes, the Ecumenical Patriarchate Archons in Canada sincerely thanks Grand Syncellus Iakovos for his participation and leadership and look forward to continued collaboration with the Lighthouse of Orthodoxy and our spiritual father, Ecumenical Patriarch Bartholomew. 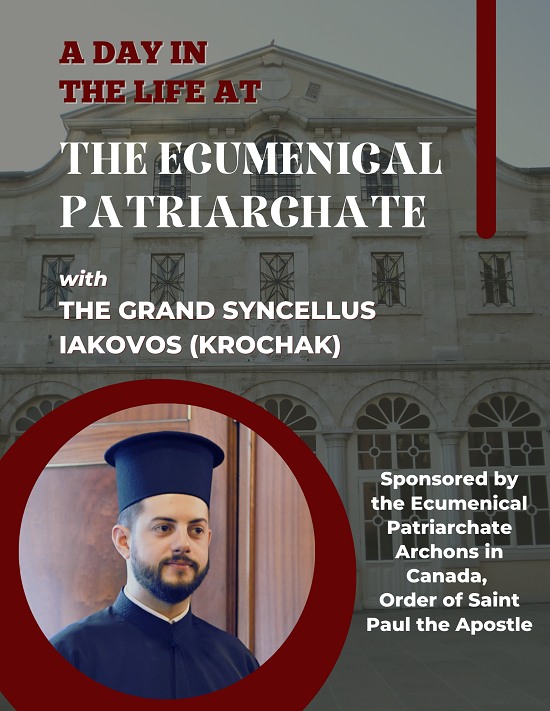 Ordinations to the Diaconate and the Priesthood in Canada

Priest stabbed during mass in Montreal