The Procession of the Hagiotaphite Fathers marched from the Patriarchate Headquarters to the Shrine of Gethsemane, led by Patriarch Theophilos of Jerusalem.

The Patriarch officiated the Service with the co-celebration of Metropolitan Isychios of Kapitolias, Archbishops Theophanes of Gerassa, Makarios of Qatar, Philoumenos of Pella and Metropolitan Joachim of Helenoupolis, Elder Kamarasis Archimandrite Nectarios, the Archimandrites Alexios, Dionysios, Thaddeus, Meletios and Isidoros and Archdeacon Mark with Hierodeacon Eulogios, as the chanting was delivered by Hierodeacon Simeon.

The Service was attended by quite a few faithful and the Consul General of Greece in Jerusalem, Evangelos Vlioras, despite the COVID-19 restrictions.

The Service included the three stases of the Lamentations and after the exapostilarion and before the Praises, the Secretary of the Holy and Sacred Synod Hierodeacon Simeon delivered a Sermon on behalf of the Secretary-General, Archbishop Aristarchos of Constantina.

The Sermon follows below:

“Your Beatitude Father and Master,

Your Excellency Consul General of Greece,

Being blessed by God to be members of the body of the Orthodox Church, we know that all the prayers, all the services of the ecclesiastical cycle, especially the Services of the Small and Great Canon of Theotokos of the fifteen fasting days of August, have a supplicant or honorary reference to the immaculate person of our Most Holy Lady Theotokos and Ever-Virgin Mary.

All Odes of the Church canons, Parakletiki, Minaion, Triodion and Pentecostarion, necessarily conclude to the Theotokion, the Troparion for the Theotokos.

In these troparia, especially of the 9th ode, which is specifically dedicated to the Theotokos, the Church praises, blesses and magnifies the pure Mariam, the most immaculate daughter of Nazareth, who due to her purity and excessive cleanness of life was predestined by God to become the vessel of the conception, and incarnation of the Only Begotten Son and Word of God, through the Holy Spirit.

The Church reminds this supernatural mystery in an easy-to-remember poetic writing style of the Holy God-bearing Fathers, as we sing in the Katavasiae: “The words and dark saying of the Prophets dimly foreshadowed Thine Incarnation from a Virgin O Christ” (Katavasiae of the Dormition, Ode 4) and in a piece of grandiose Byzantine music “the prophets foretold about Thee from above”.

Numerous are the icons of the Old Testament which symbolise the Theotokos concerning the mystery which God the Father was pleased to accomplish through her.

The burning bush of Sinai, the crossing of the Red Sea “in dry feet” from the Israeli people who marched on land, the ladder of Patriarch Jacob are only a few of the icons which prefigure the event chanted by the Church “Thy childbirth was shown to be without corruption; God came froth from thy loins” (Katavasiae of the Transfiguration, Ode 9) and it projects them to become a solid knowledge and a way of life for its faithful members.

This philanthropic providence of God for our salvation, which is foretold in parables and riddles in the Old Testament, is revealed in more precision in the New Testament, “when the fullness of time came” (Gal. 4:4). Then Mariam of Nazareth receives a visit and is invited by God to become an accessory of His goodwill to save man.

She is addressed by Archangel Gabriel: “thou who art full of grace, the Lord is with thee” (Luke 1:28) in a greeting that no man had ever heard before, and the Archangel reveals to her that she is to conceive by the Holy Spirit and bear the Only Begotten Son of God in a human form.

As she consents, “behold the maiden of the Lord, let it be unto me according to thy word” (Luke 1:38), immediately “the Son of God becomes Son of the Virgin”, the until then bodiless Word of God becomes flesh, borrowing flesh from her flesh, receives a body and she becomes Theotokos (Mother of God).

He for whom the Apostle of nations says: “For in him dwelleth all the fulness of the Godhead bodily” (Col. 2:9), dwells in her bodily.

This mystery is not done “under the stool” but “it is placed on the lamp” to illuminate the world.

When the “Virgin went into the hill country with haste, into a city of Juda” (Luke 1:39), then her relative Elizabeth “was filled with the Holy Ghost: And she spake out with a loud voice, and said, Blessed art thou among women, and blessed is the fruit of thy womb.

And whence is this to me, that the mother of my Lord should come to me?” (Luke 1:42-43). Elizabeth receives the information that Mariam bears in her womb the incarnate God the Word, that she is a vessel of the Insufferable, a dwelling place for the Uncontained, and that the One she carries in her womb is the One who holds the whole universe. Information for this truth is also given to Elizabeth’s foetus, Saint John the Forerunner, who “leapt in her womb” (Luke 1:41).

In this event, the two mothers meet and embrace each other and also Saint John meets with the Lord, “the star with the sun”, as they are both foetuses, and the Theotokos prophesises “behold, from henceforth all generations shall call me blessed” (Luke 1:48).

All the honour and reverence that the Orthodox Church shows in the Fathers’ Sermons for the feasts of the Nativity, Annunciation and Dormition are based on this foretelling by the Mother of God.

The Fore feast of the Dormition of Theotokos, which is uniquely celebrated with this Epitaph service by the Church of Jerusalem, under the lead of H.H.B. our Father and Patriarch of Jerusalem Theophilos, is not considered death; that is why it is characterised as “deathless”, singing: “On thy deathless Dormition, all the heavens are jubilant, and the hosts of Angels exceedingly rejoice, clouds caught the Apostles high into the air; and although dispersed throughout the world, they were brought to stand in one choir before thine immaculate body” (Matins, praises, troparia 1,3).

Saint John Damascene in his “1 Praise to the Dormition” (Publication of the Institution Saint John the Russian, Athens, 1979) says, that “the source of life is going to life through death” (p. 128) and characterises the Dormition as “the best departure, through which life in God is granted” (p.130), and that “after the departure of the Theotokos her body remained incorrupt” (p. 130) and that “through His ineffable mercy, the Son receives his Most Holy Mother in His hands and welcomes her soul” (ps. 111-112).

Following Saint Cyril of Alexandria in his “Praise to the Holy Mary Theotokos” in the 3rd Ecumenical Synod of Ephesus against Nestorius, let us say along with him: “Rejoice Mary Theotokos, Virgin Mother, Light-bearer, Rejoice Mary the ornament of the universe, immaculate dove, undying lamp, from you the Sun of righteousness is born, rejoice Mary the dwelling place of the Uncontainable, whom hast contained the Only Begotten God the Word.

Rejoice Mary for who the prophets sing, shepherds give glory, angels dance, Archangels rapture, wise men offer worship, John while still in his mother’s womb leapt with joy, Rejoice Mary Theotokos through whom the true Light came forth, our Lord Jesus Christ, who said in the Gospels “I am the Light of the world” (PG 77, 1032-1033).

In our praise to the Most Holy Lady Theotokos, who the triumphant Church praises, the Most honourable than the Cherubim, most glorious beyond-compare than the Seraphim, who stands by the right side of the Saviour having the mother’s boldness, let us fervently pray to her, to remove the infectious covid-19 which plagues and decimates humanity, to extinguish the fires which burn and charcoal the creation of God, the homes and the people, to come as a helper to those who are left without the necessary means to live and to pacify and protect the Middle East and the Holy Land, to heal the sick Hagiotaphite Fathers, and to strengthen the healthy ones in their work of the witness, conciliation, peace and love for the preservation of the Holy Land, to comfort every suffering and tested soul and protect our nation from every hostile foreign intrigue. So be it.”

After the Praises and Doxology the Priests carried the Epitaph with the icon of the Dormition to the top of the stairs where there was an entreaty before taking the Epitaph back to its place behind the Theotokos’ Tomb.

The Service was dismissed and the Patriarchal Entourage was welcomed at the Hegoumeneion by the Hegoumen, Archbishop Dorotheos of Avela, and offered a reception with refreshments for the continuing heatwave. 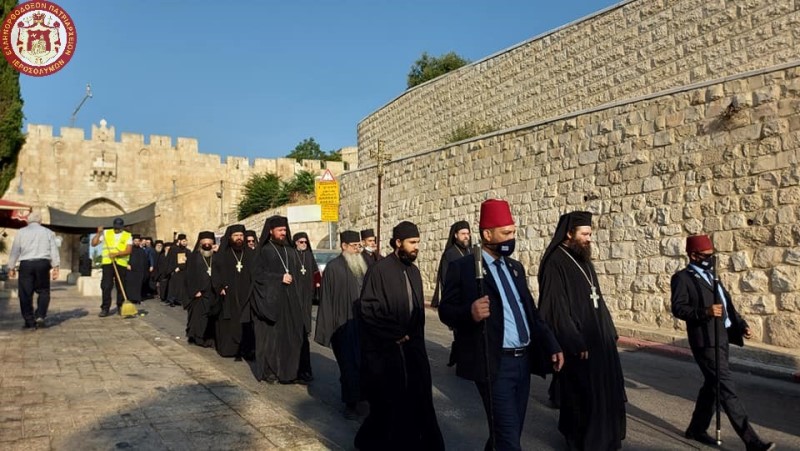 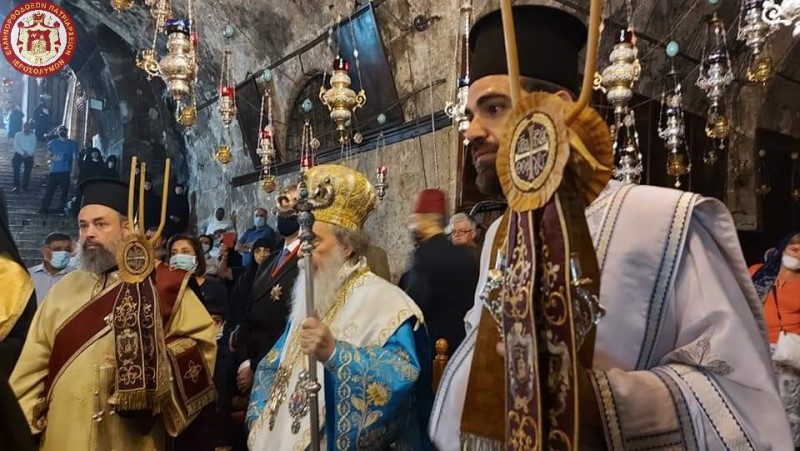 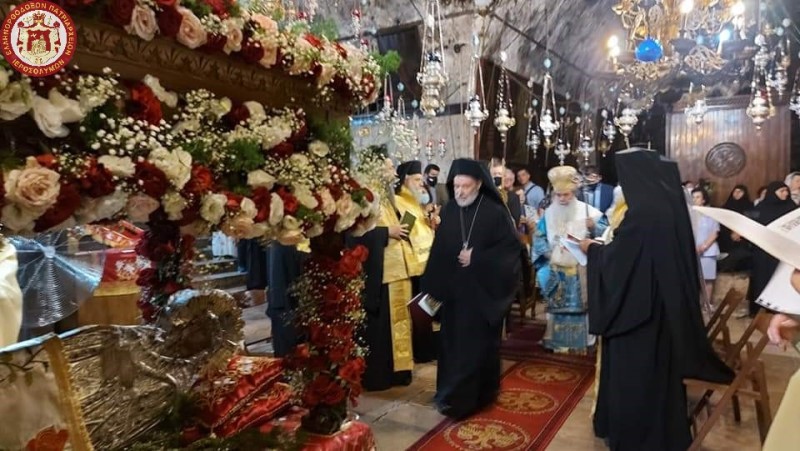 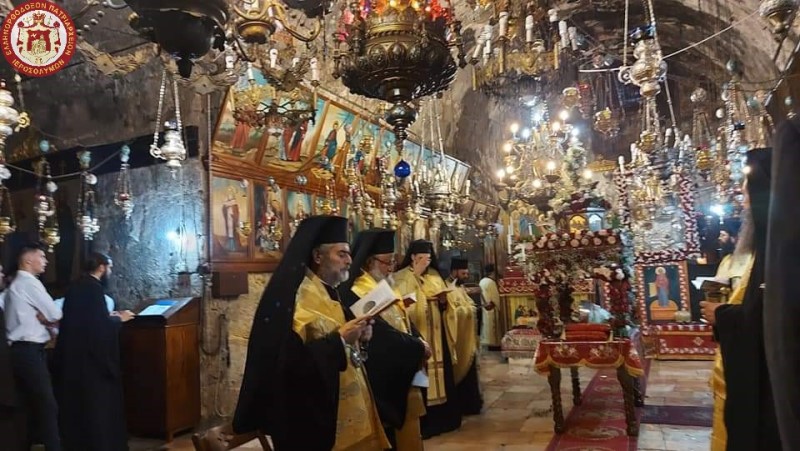 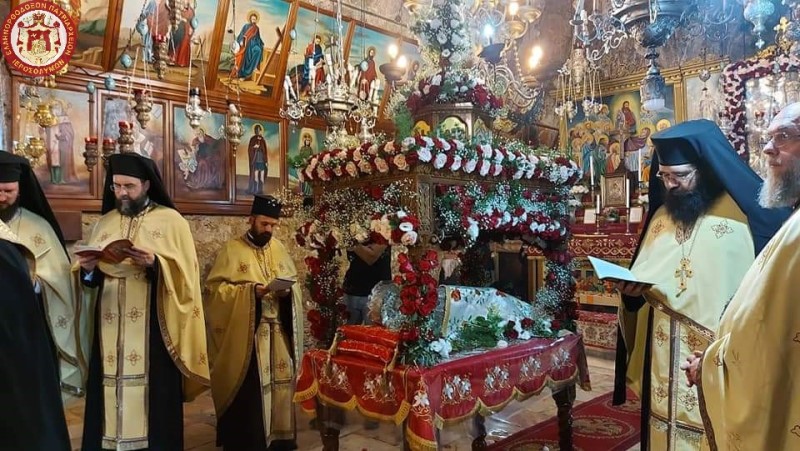 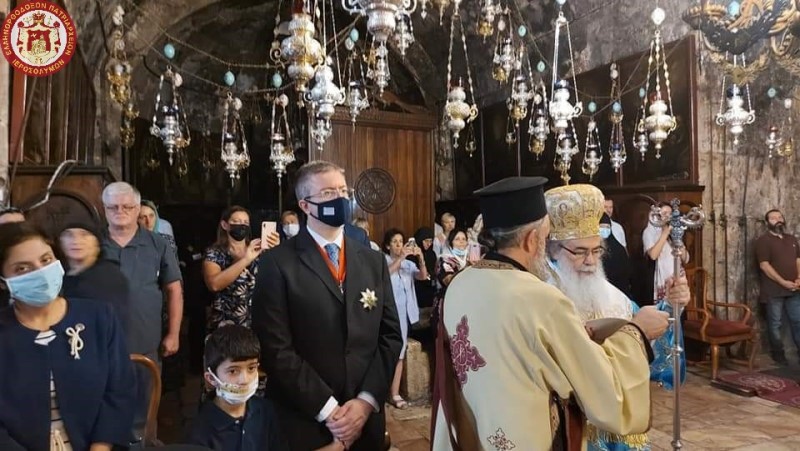 Archbishop of America to travel to Chios on Sept 6