Roundtable Seminar on the Autocephaly of Ukraine and War

Four years after the first attempt to analyze the impact of the Autocephaly of Ukraine on the Orthodox Church by “Aenaos” through the “Orthodoxia in Forum”, the world seems to have changed. In the new reality that has been shaped both on an ecclesiastical and geopolitical level, the worst fears have turned into real nightmares.

In the face of this historic conjuncture, the Organization for the Promotion of Greek and Orthodox Culture once again employs knowledge.

Great personalities from the ecclesiastical, political, academic, and journalistic worlds discuss this very complex issue, which has really changed the world, in a roundtable discussion, with the sole aim of highlighting the truth and understanding what is happening around us.

Three debates in equal numbers of round tables will attempt to shed light on one of the most extreme conflicts in 21st-century Europe.

Ecumenical Patriarch Bartholomew, Pope and Patriarch of Alexandria Theodore, Archbishop Makarios of Australia, the Metropolitans Gregorios of Cameroon, Chrysostomos of Messinia, Gabriel of Nea Ionia, and Ieronymos of Larissa, the former Deputy Prime Minister and Professor of Constitutional Law Evangelos Venizelos along with the Journalists, Maria Antoniadou, Nikolas Vafiadis, Adamantia Lioliou, Tasos Teloglou, Dimitris Triantafyllidis, and Andreas Loudaros discuss and analyze the religious, theological, political and geopolitical implications of the issue that changed the world.

The event will take place in the ceremonial hall of the Armed Forces Officers Club (Saroglio Mansion – LAED Rigillis 1 Athens) on Tuesday, January 24 at 17:00.

Entrance to the public will be free. 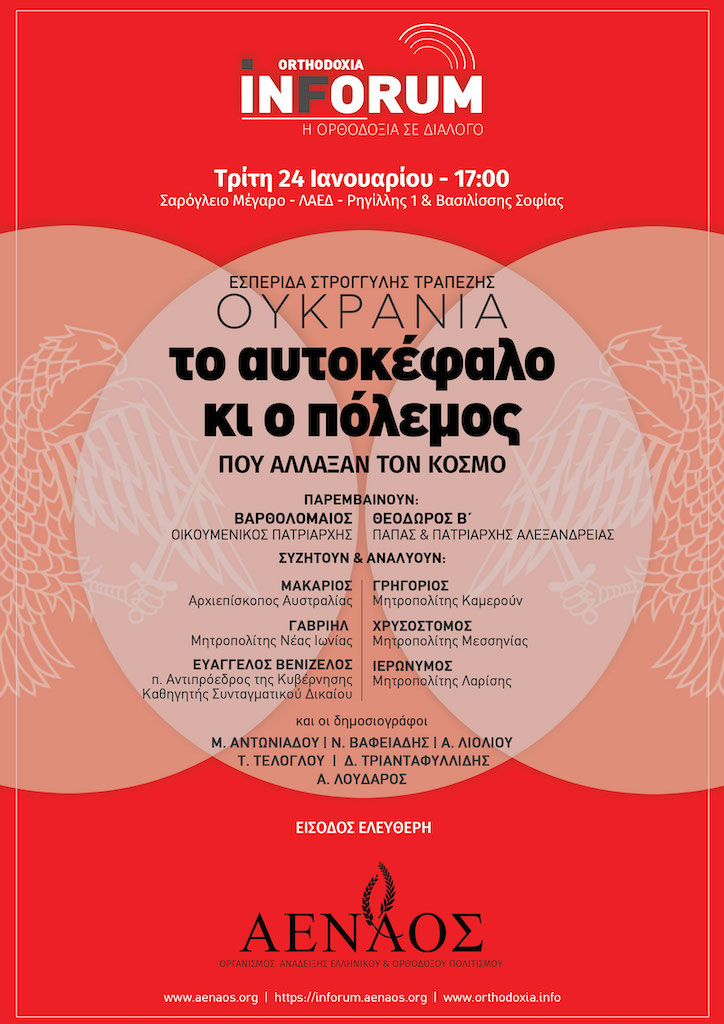 Hundreds killed and thousands injured in strong earthquakes in Turkey

Metropolitan Chrysostomos of Messinia: The goal of the Russians has always been to eliminate the Ecumenical Patriarchate