Patriarch of Romania: The Creator comes to His creation

On the eve of the Theophany of the Lord, Patriarch Daniel of Romania welcomed the clergy of the Patriarchal Cathedral at his patriarchal residence.

Patriarch Daniel spoke to them about the cosmic character of the celebration and about how important it is for the faithful to receive the priest on the feast’s eve.

Patriarch Daniel referred to the special services on the Eve of the Theophany of the Lord – the Royal Hours and the Divine Liturgy of Saint Basil the Great combined with Vespers. These services and hymns tell us that “He who made the world has appeared in the world today.”

“That is, Christ the eternal Son of God in Whom, through Whom and for Whom the world was made, appeared in the world at the Jordan River. When God made the world according to His plan, His eternal Son was the center of attention and received from God the Father the world as a gift,” Patriarch Daniel explained on January 5, 2023.

“Then he is appointed to come into the world to show the love of the Father to the world and turn the world to please the Father. That is why the Saviour institutes the service of thanksgiving, the Holy Eucharist.”

“Christ the Lord does not come to the waters of the Jordan as a mere man of the world, but as the Creator, the Fashioner of the world. Therefore, the nature of the waters is sanctified with His Baptism in the Jordan River, just as the womb of the Virgin was sanctified when He was conceived from her, and the cave in Bethlehem where He was born was also sanctified.”

“The Creator comes in a visible form, in a human form, in His creation. That’s why this celebration has a cosmic dimension,” Patriarch Daniel emphasized on January 5.

The Patriarch of Romania noted that the celebration of the Baptism of the Lord is also called the Theophany or Epiphany of the Lord, recalling that the term “epiphany” referred in antiquity to the appearance of the emperor or king in public, to the crowds.

Receiving the priest on the eve of Theophany

Patriarch Daniel said that on the eve of the feast, priests come from the church with holy water and the icon of the Baptism of the Lord “to herald the feast, to bring the blessing of the Holy Trinity to every home, but also to remind every Christian that they were baptized in the name of the Father, the Son, and the Holy Spirit.”

“The Feast of the Baptism of the Lord is the foundation for Christian baptism in the name of the Holy Trinity. John’s baptism was unto forgiveness of sins, but it did not offer the saving grace that comes through the work of the Holy Spirit.”

“By the fact that people believe in Christ and are baptized in the name of the Holy Trinity, they are adopted, they are not mere slaves, but receive the quality of sonship.”

Citing the explanations of Saint Basil the Great, the Patriarch of Romania said that Christian baptism brings the forgiveness of sins, the dignity of sonship according to the grace of God, and the hope of resurrection because through baptism, man is already on his way to eternal life. 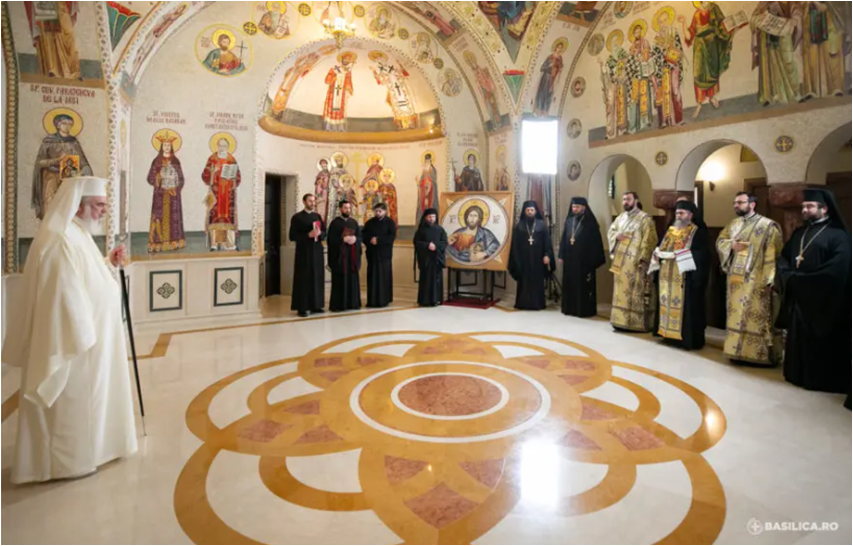 Bishop Dimitrios of Xanthos was elevated to the rank of Metropolitan