On Saturday, November 13, 2021, Patriarch Theophilos of Jerusalem was very warmly welcomed and officiated the Divine Liturgy at the old Church of Saint George in the Rum Orthodox Arab-speaking Community of Buqei’a, the Biblical Peqi’in, in the Acre-Ptolemais district of northern Israel.

This Liturgy aimed for the Orthodox education and the sanctification of the Orthodox faithful of this Community.

Co-celebrants to the Patriarch were Metropolitan Kyriakos of Nazareth, Archbishop Aristarchos of Constantina, Metropolitan Joachim of Helenoupolis, Elder Kamarasis Archimandrite Nectarios, the Dean Priest of this church Father Ioannis and the Dean Priest of the other Church of this town Father Netarios, other Priests of the neighbouring towns, Archdeacon Mark and Hierodeacon Eulogios.

The chanting was delivered in Arabic by the Byzantine choir of Acre-Ptolemais under the lead of Archimandrite Philotheos, and the service was attended by the faithful of this Community.

The Patriarch delivered the following Sermon to them:

“Then came to him his mother and his brethren, and could not come at him for the press. And it was told him by certain which said, Thy mother and thy brethren stand without, desiring to see thee. And he answered and said unto them, My mother and my brethren are these which hear the word of God, and do it” (Luke 8:19-21), the Lord says.

The grace of the Holy Spirit has gathered us all in your historical town of Buqei’a, to celebrate the Divine Liturgy and glorify the Name of our Trinitarian God in Eucharist, praising Him with the words of the psalmist: “What shall I render unto the Lord for all His benefits toward me?” (Psalm 116:12). The psalmist says, so great is his gratitude that he doesn’t know what to render unto the Lord for this great benefit.

And we wonder, what is this great benefit of the Lord? It is His philanthropy, namely His infinite love toward man. This very love did Jesus teach to the crowds, saying that “My mother and my brethren are these which hear the word of God and do it” (Luke 8:21).

And what is the word of God? “… the word of the truth of the gospel” (Col. 1:5), Saint Paul preaches. And what is the truth of the gospel? “That was the true Light, which lighteth every man that cometh into the world” (John 1:9). And the true light is our Lord Jesus Christ: “I am the light of the world: he that followeth me shall not walk in darkness, but shall have the light of life” (John 8:12), the Lord says.

The interpreters’ comments on this are noteworthy: “God is the common Father between Him [Christ] and them [the people], as the Creator; the Creator of Christ for His human nature” Zigavinos says. “He is not ashamed to call them brethren” (Hebrews 2:11), he showed the difference; for He is not a brother to us according to the nature, namely the substance, but according to His philanthropy”, Saint Photios the Great says. “He is not ashamed to say and that shows that he was not of the same nature, but that he was not ashamed due to His caring” Theophylaktos says.

In Christ’s words: “My mother and my brethren are these which hear the word of God, and do it” (Luke 8:21), my dear Brethren, we distinguish the incomprehensible to the unfaithful man mystery of the Incarnation of God the Word through the pure flesh of the Ever-Virgin Theotokos Mary. And we say this, according to Saint Paul’s preaching: “And without controversy great is the mystery of godliness: God was manifest in the flesh, justified in the Spirit, seen of angels, preached unto the Gentiles, believed on in the world, received up into glory” (1 Tim. 3:16).

Indeed, great is the “mystery of godliness”, namely the mystery of the incarnation of God the Word, who appeared in the flesh. This is precisely the magnificent feature of the Christian religion, that “the Word was made flesh, and dwelt among us, (and we beheld his glory, the glory as of the only begotten of the Father,) full of grace and truth” (John 1:14), according to the true witness of Saint John the Theologian.

Interpreting these words, Saint Athanasius says: “Hearing that the Word became flesh, we do not think of the Word as flesh, but that He put on flesh upon Him and became man”. And Saint Chrysostom says: “Because there are some who say that all things related to the Providence are a fantasy and a hypocrisy and a suspicion… the word ‘became’ was not a change of nature, but His will to receive the true flesh upon Himself”.

In other words, the only and ultimate purpose of the Christian religion is the unity of man with God in the Person of our Lord Jesus Christ. We foretaste this mystical union through our participation in the Sacrament of the Divine Liturgy, that is, the bloodless sacrifice of the Holy Eucharist.

This very union of God with man was accomplished by the Saints we honour today, the Apostles of the seventy, Stachys, Apelles, Ablious, Ourvanos, Aristovoulos and Narcissus and their co-martyr Epimachus. They became brothers of Christ because they not only heard but also preached and followed the word of Christ.

Let us endeavour, my brethren, to keep our calling to Christ steadfast through our good words and deeds. “For many are called, but few are chosen” (Matthew 22:14). For it is in this manner that the entrance to the kingdom of heaven will be kept open and free and be granted to us, according to Saint Peter’s advice: “For so an entrance shall be ministered unto you abundantly into the everlasting kingdom of our Lord and Saviour Jesus Christ” (2 Peter 1:11). To Him belongs the glory, now and forever and unto the ages of ages. Amen. Many happy returns!”

The Divine Liturgy was followed by a reception, where His Beatitude addressed all present as follows:

“Let your light so shine before men, that they may see your good works, and glorify your Father which is in heaven” (Matthew 5:16).

Honourable Members of the Ecclesiastical Committee,

Blessed is the God of our Fathers, Who has gathered us all in your historical town of Buqei’a, where after the deadly trial of the corona plague, we have been deemed worthy to celebrate the Holy Sacrament of the Eucharist.

“Behold, how good and how pleasant it is for brethren to dwell together in unity!” (Psalm 133:1), the Prophet David chants. “Honour all men. Love the brotherhood. Fear God. Honour the king” (1 Peter 2:17), the Apostle Peter commands.

And we say this because our Primeval Rum Orthodox Community co-exists with the other religious communities here, and with the Druze tribe, in unity, love and peace, which are the fruit of the Holy Spirit, that is of God, as the Apostle Paul preaches: “But the fruit of the Spirit is love, joy, peace, longsuffering, gentleness, goodness, faith, meekness, temperance: against such there is no law” (Gal. 5:22-23).

This very witness of love, peace and unity is irrefutably testified to the world by the Holy Church of Christ in the Middle East and in the Holy Land throughout the centuries. Our Church of Jerusalem does that through its spiritual mission and pastoral work; “For this God is our God forever and ever: he will be our guide even unto death” (Psalm 48:15).

We have visited you today, not as strangers and foreigners, but as Brothers and Shepherds, in order to proclaim “the unity of the Spirit in the bond of peace” (Eph. 4:3) between us. Moreover, in order to convey the blessing of the Holy City of Jerusalem, the place of meeting of the heavenly with the earthly, of God with the people, but also the place where God “hath broken down the middle wall of partition…of the enmity” (Eph. 2:14-15).

We would like to reassure all of you, my dear brethren, through the words of the wise Paul, that we “do not cease to pray for you, and to desire that ye might be filled with the knowledge of his will in all wisdom and spiritual understanding; That ye might walk worthy of the Lord unto all pleasing, being fruitful in every good work, and increasing in the knowledge of God” (Col. 1:9-10). Amen.

Many happy returns, free from the Corona plague!”

Finally, the Patriarch visited the new Holy Church which He consecrated a few years ago, and participated in the meal hosted by the Parish at the Church where the Divine Liturgy was celebrated. 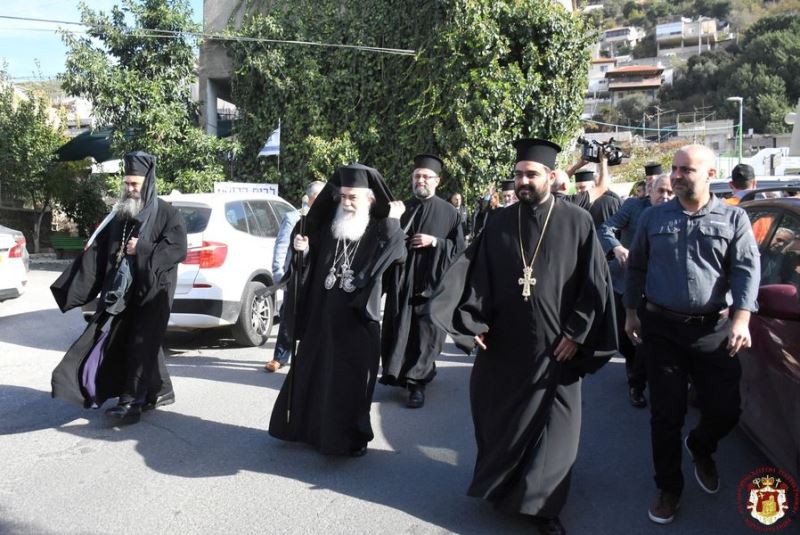 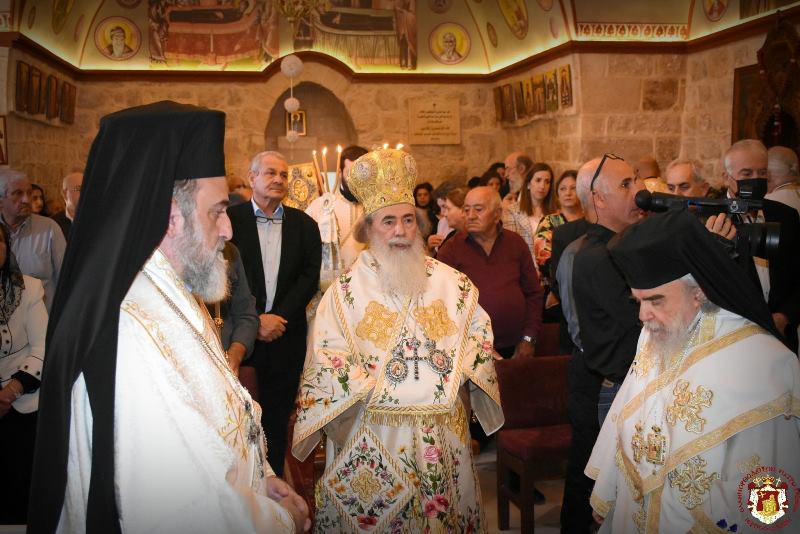 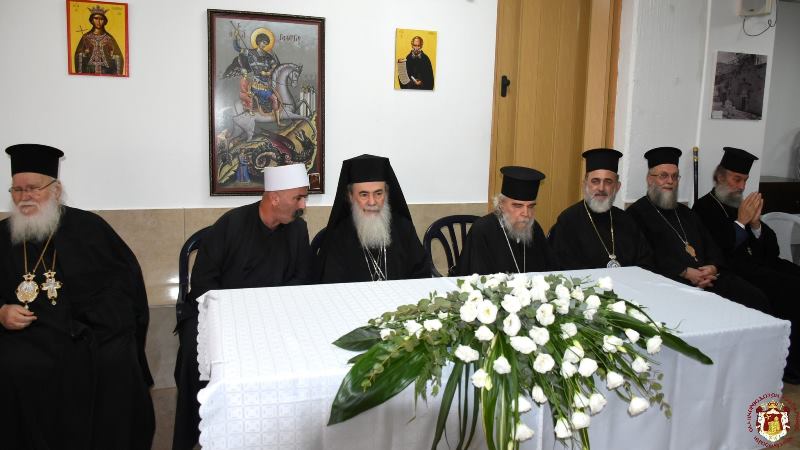 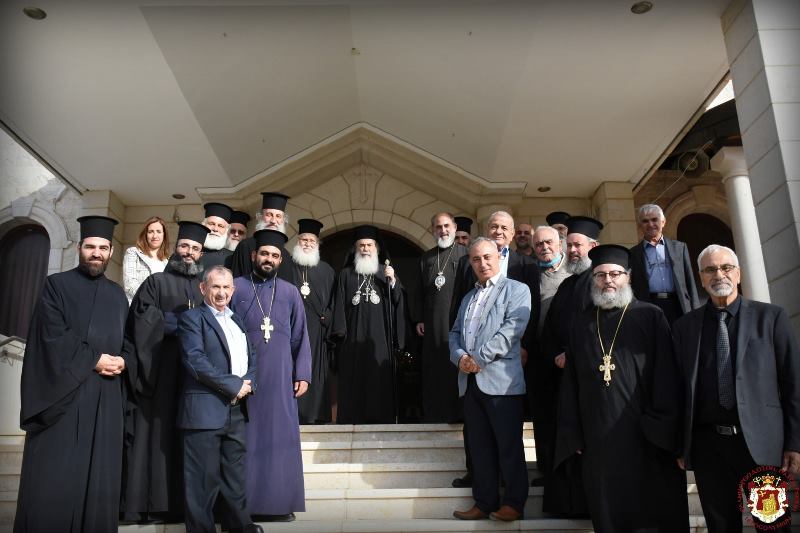 Archbishop of America: Saint John Chrysostom was persecuted by “false brethren” within the Church as our Ecumenical Patriarch