Young people, either boys or girls, who were martyred for the faith and the homeland, are presented for the first time in the exhibition “New Martyrs: On the Road to Freedom” of the Mount Athos Center, presenting for the first time new hagiographic themes that are never seen before in the tradition.

To date, documentary research has identified approximately 200 new martyrs/saints who were martyred throughout the Ottoman rule. Fifty-six of those martyrs came into prominence through this report.

“We wanted to give prominence to the invisible heroes during the Turkish occupation,” noted the Director of the Mount Athos Center, Anastasios Douros, who curated the exhibition.

As Anastasios Douros said, what is the most impressive is that these are young people, “either girls or boys, were not afraid and martyred for the faith in Christ and for the homeland.

This was very important and essential at that time because it was their stance that greatly stimulated the morale of the Greeks.”

As Anastasios Douros explained, these people were usually taken to the pashas and told “either you will become a Turk or you will be killed” and they decided to be martyrs of their faith.

There are other cases where they were converted into Muslims because they succumbed to pressure, but immediately afterwards they understood what they had done and offered themselves to martyrdom.

These are modern saints who are mainly revered in the areas where they come from. Among them is Saint Tunom, Arab Emir, who, when he witnessed the miraculous lighting of the Holy Fire in the Church of the Holy Sepulchre, he believed, was converted into Christianity and then was martyred by the Muslims.

Works from naive to digital

During the pandemic, the Mount Athos Center organized the exhibition and invited 26 artists, providing them details about the theme, however, without guidance on which saint to paint. “Many of the themes of the exhibition did not pre-exist in the iconographic tradition.

Apart from the well-known new martyrs, such as Saint George of Ioannina, most of them were made from scratch.

The painters did their research, they searched the lives of the saints and they are painted for the first time,” said Anastasios Douros and added that when they first came in contact with the painters, there was no certainty about when the exhibition could take place. “When the cultural venues finally opened, we were ready,” he noted.

Although the exhibition depicted new martyrs from Mount Athos, and there are painters who are also monks, it is not an exhibition dedicated entirely to Mount Athos, but it is an exhibition that depicts the evolution and the history of Byzantine painting. From naive art, classical Byzantine, modern, to digital, which were made on a tablet.

“These differences show that Byzantine painting is constantly evolving,” said the director of the Mount Athos Center.

Different styles raise the issue of the cult dimension of the works, a topic that has been discussed recently in the circles of hagiographers. “The cult dimension is not lost,” noted Anastasios Douros, “it is the face, not the style or the way it is depicted, that we pay our respects.”

In an effort to reach young people, the visitor has the opportunity to scan a code available in all the works to get all the information (either visual or audio) about the work, the synaxarion (life) of the saint and the biography of the artist.

Within the next week, the relevant catalog will be released, in which, in addition to the works of the exhibition, it will contain the synaxaria of the presented new martyrs as well as a text by Archimandrite Vassilios of Iveron Monastery. 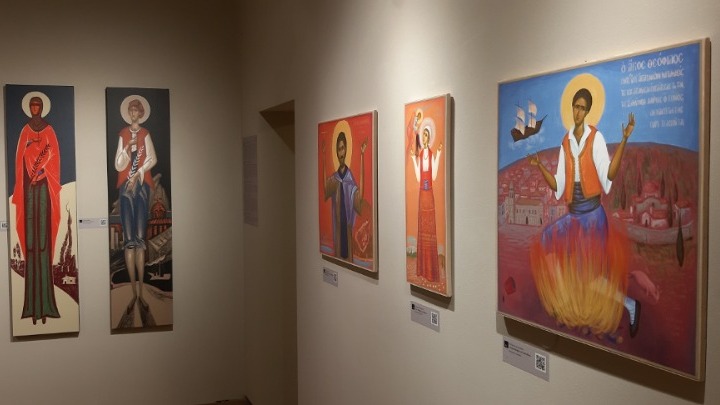 Patriarch of Antioch met the Crown Prince of Abu Dhabi

Patriarch John X of Antioch and All the East met the Crown Prince of Abu Dhabi, Sheikh Mohammed bin...

Archbishop Elpidophoros of America expressed his gratitude via a post on his social media to the President of the...

To commemorate the bicentennial anniversary since the beginning of the Greek War of Independence in 1821, Australian Post, in...

Visit to the Greek School of St Eleftherios in Leyton

On Saturday, November 27, the Coordinator of the schools of the Archdiocese of Thyateira and Great Britain Ismini Hatzigianni,...

The Minister of Education and Religions of Greece, Niki Kerameos, had a meeting with Metropolitan Athenagoras of Belgium, on...