Archbishop of Australia: There can be no Orthodox Church without the Ecumenical Patriarchate

I can not imagine the Orthodox Church without the Ecumenical Patriarchate. She cannot exist! Despite what is said and heard; despite the voices, the cold and icy voices from the north; the strange voices; the voices of secularisation, there can be no Orthodox Church without the first of Orthodoxy, who is the Ecumenical Patriarch.”

The above words were communicated by His Eminence Archbishop Makarios of Australia to the faithful of the Parish of St Spyridon, in Kingsford, Sydney, outlining the historical role and the sacrificial contribution of the Mother Church.

His Eminence presided over the Hierarchical Concelebration of the Divine Liturgy at the Parish, which was celebrating its patronal feast on Sunday, 12th December, with Bishops Iakovos of Miletoupolis and Kyriakos of Sozopolis.

Before the procession of the holy icon of St Spyridon, he elevated Parish Priest, Fr Steven Scoutas to the rank of Protopresbyter of the Ecumenical Throne. “This distinction constitutes the culmination of much effort, many struggles, huge contributions, obedience, devotion and sacrifice,” he said, addressing Fr Steven, while urging the faithful to be faithful and devoted to the Mother Church and to show their love for the Ecumenical Patriarch and the Holy and Sacred Synod.

This was preceded by the moving address of the honoured clergyman who, with much gratitude, thanked the Archbishop for his proposal to receive the office of Protopresbyter of the Ecumenical Throne, as well as to His All Holiness Patriarch Bartholomew for bestowing him with the highest honour. Fr Steven emotionally recalled an image that sealed his childhood soul in 1964:

It was the historic, first meeting of late Ecumenical Patriarch Athenagoras with the then Pope of Rome, Paul VI. He then referred with filial respect and love to Ecumenical Patriarch Bartholomew, whom he was counted worthy to have met during both of His All Holiness’ two visits to Australia, the first as Metropolitan of Philadelphia, and during his pilgrimages to the Phanar, the sacred Centre of Orthodoxy.

Fr Steven, after dedicating the distinction he received to his parents of blessed memory, Sava and Maria, he thanked Presvitera Panagiota for her support over many years, as well as to his parishioners for their immense love, while finally emphasising that, “since childhood, I have worshipped and I will remain until my last breath, defending the Ecumenical Patriarchate.”

Clergy and laity wholeheartedly wished well the new Protopresbyter of the Ecumenical Throne, while the shout, “Worthy” was heard loudly, for the second time in the church. Earlier, those present at the Divine Liturgy were blessed to observe the ordination of Chris Baghos to the diaconate, the first degree of the holy orders, and who begins his ministry as a deacon by the side of Fr Steven, at the historic church of St Spyridon, Kingsford.

The new deacon received the paternal advice and spiritual counsels of his Shepherd, who entreated him to learn from the example of the honoured Saint and Patron of the Parish that he will, henceforth, serve.

Having briefly described the life of St Spyridon and expanding on the miracles he performed, emphasising the moving event with his miraculous intervention at the First Ecumenical Council of Nicaea, His Eminence made the point that the Saint’s whole life “teaches us that man’s relationship with God is defined as a relationship of love.”

“We love God freely and without selfishness,” he noted, “or, as St Pasios the Holy Athonite monk would say, we love God as if there is no hell or heaven. This means that we do not love Him out of fear of the punishment of hell. But equally, we do not love Him to gain heaven. It is a true and selfless love that determines our relationship with God.”

Turning to the ordained, he urged him: “Bring your neighbour, every neighbour, into communion with Christ,” adding that, “if you cannot do this, at least do not become a barrier for someone else to cultivate a relationship with the living God. The life of St Spyridon teaches us that we will gain man through our humility and by dying to ourselves,” he underlined elsewhere and continued:

“I have no doubt that you will succeed,” the Archbishop then said, acknowledging to the new deacon, “you have a secular education but, above all, you are adorned by having been raised in a life in God.” He described it as a blessing that he will serve by Fr Steven Scoutas, while he closed his speech with the exhortation: “Minister with love and make your mark from a heart that bleeds with compassion for your neighbour.”

For his part, Fr Chris, with many family members looking on with visible emotion including his wife, Elleni, gave an assurance that he will do everything to meet the expectations of the Church and His Shepherd. “I want to imitate your loving example throughout my ministry. Especially your willingness to create and maintain space for everyone in your heart,” he stressed, among other things, respectfully addressing Archbishop Makarios.

He referred with gratitude to Fr Steven, as well as to his predecessor, the Very Reverend Archimandrite Amphilohios Papantoniou, while pointing out that the warm welcome he received from the Parish Council and especially from the President, Mr Elias Economou, is a source of encouragement for him. 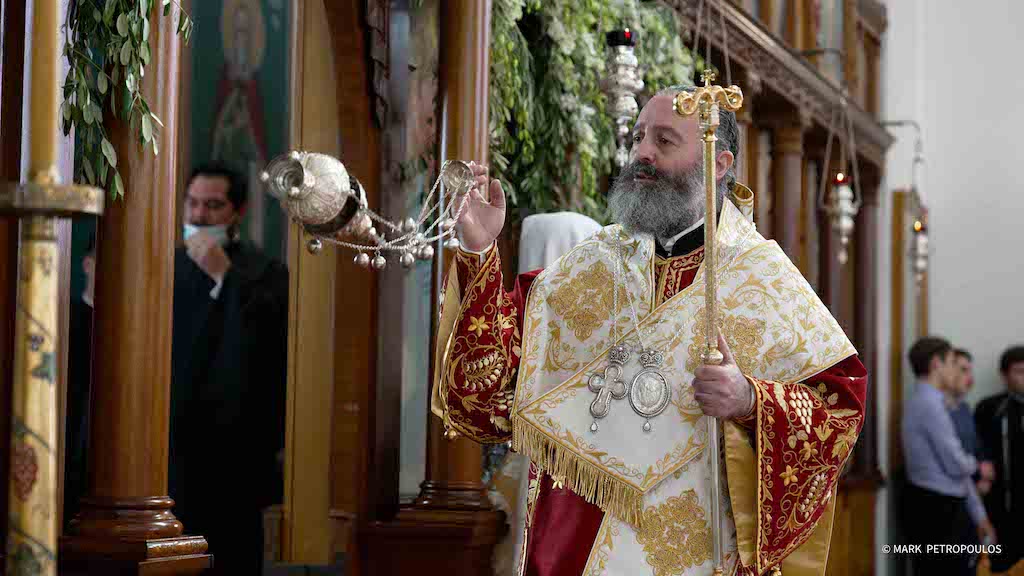 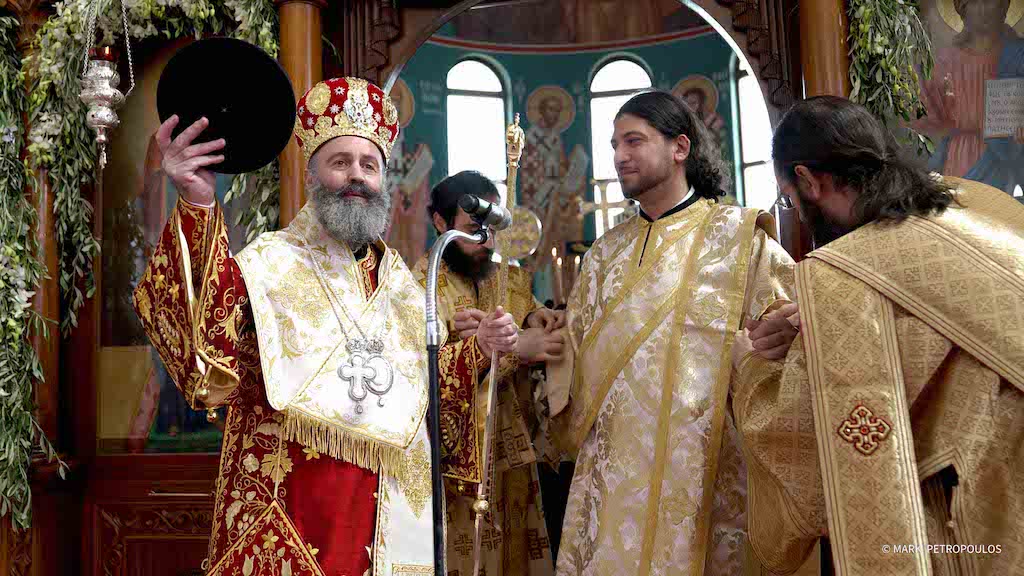 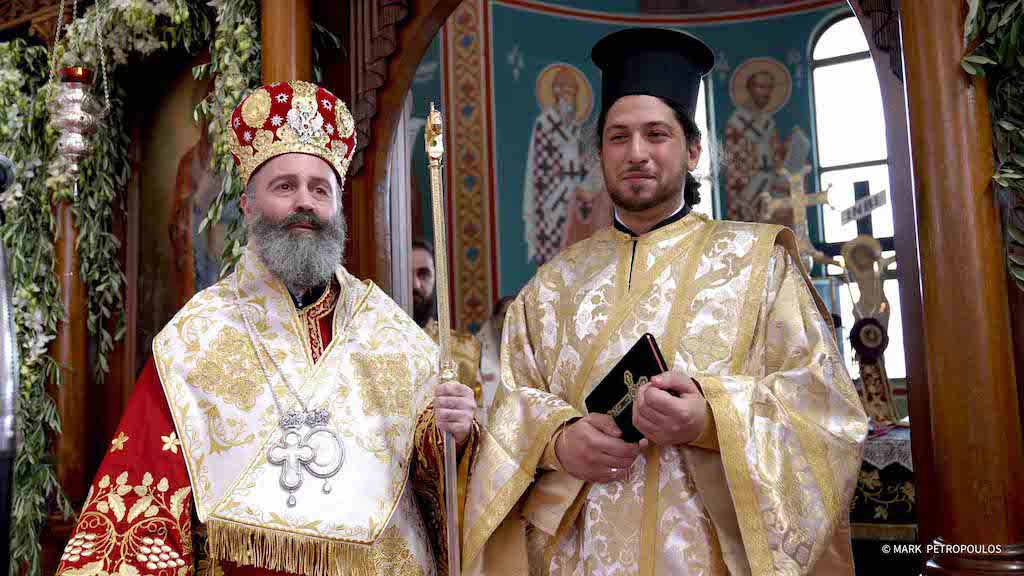 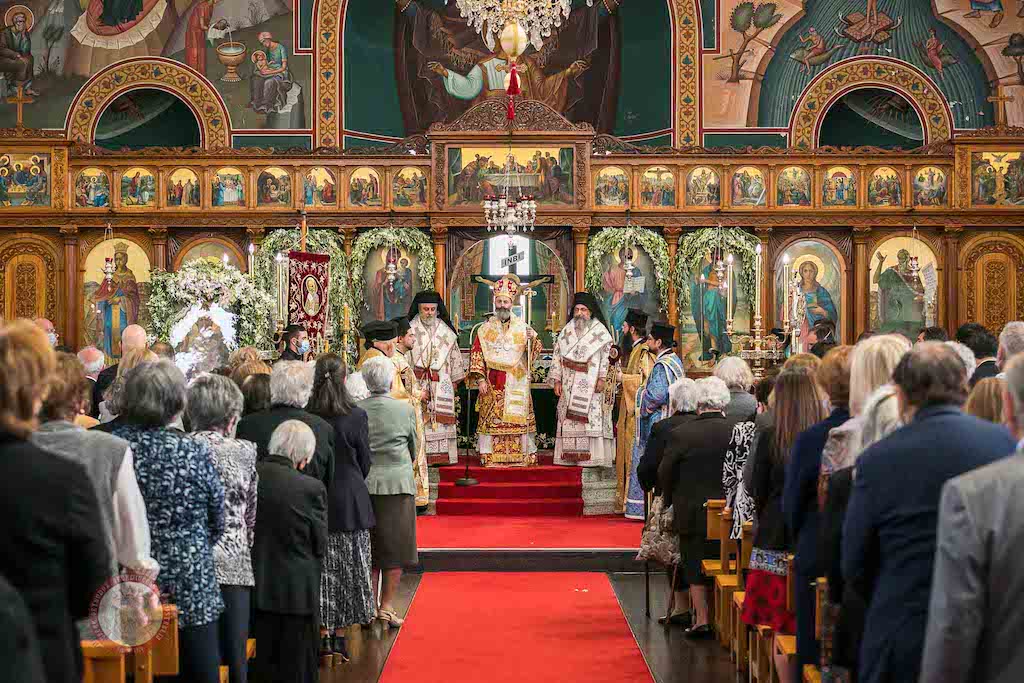 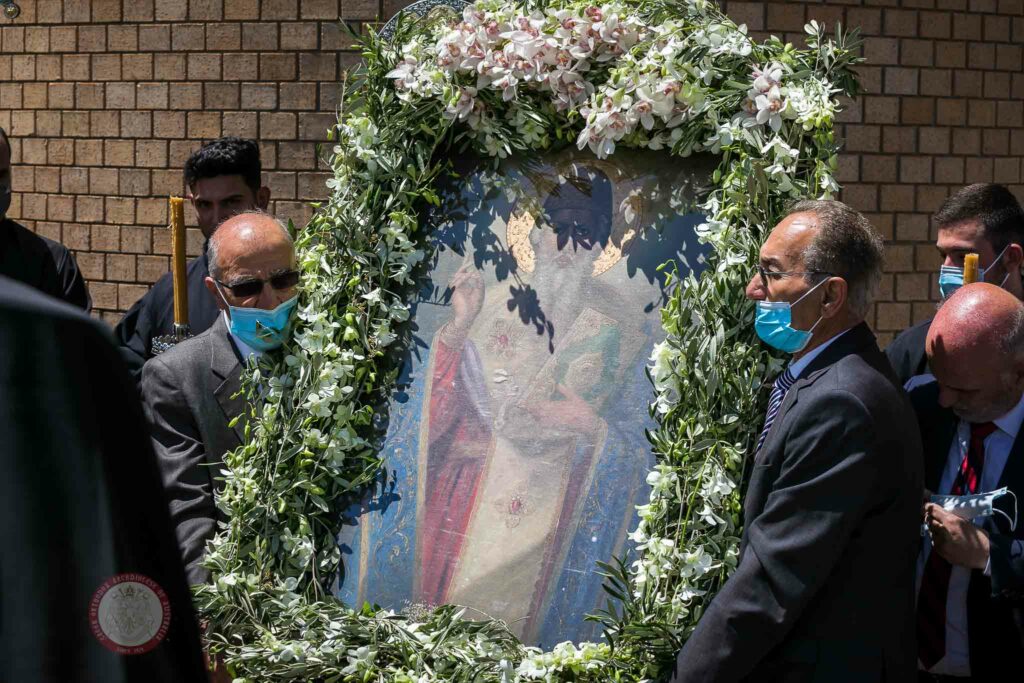 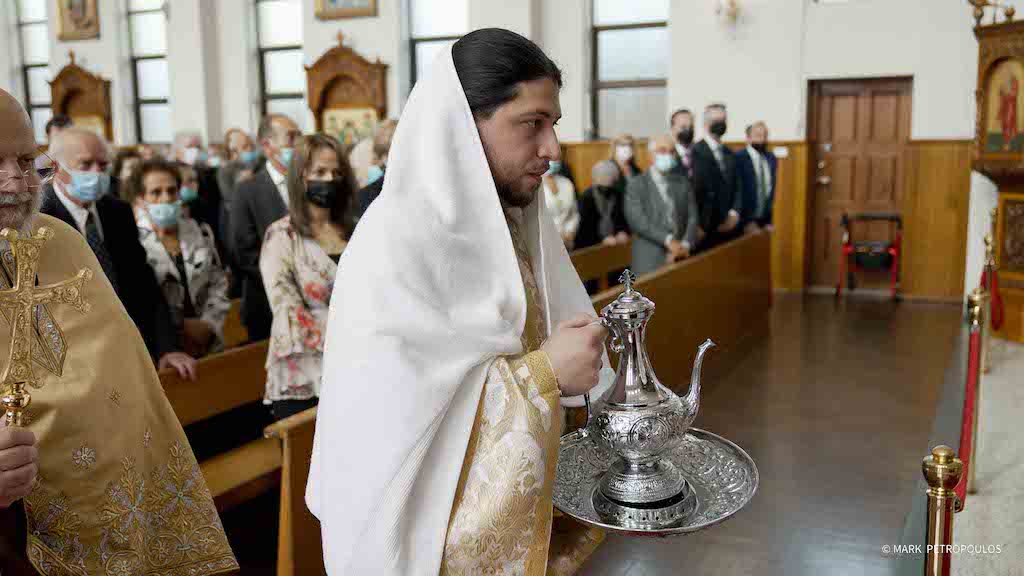 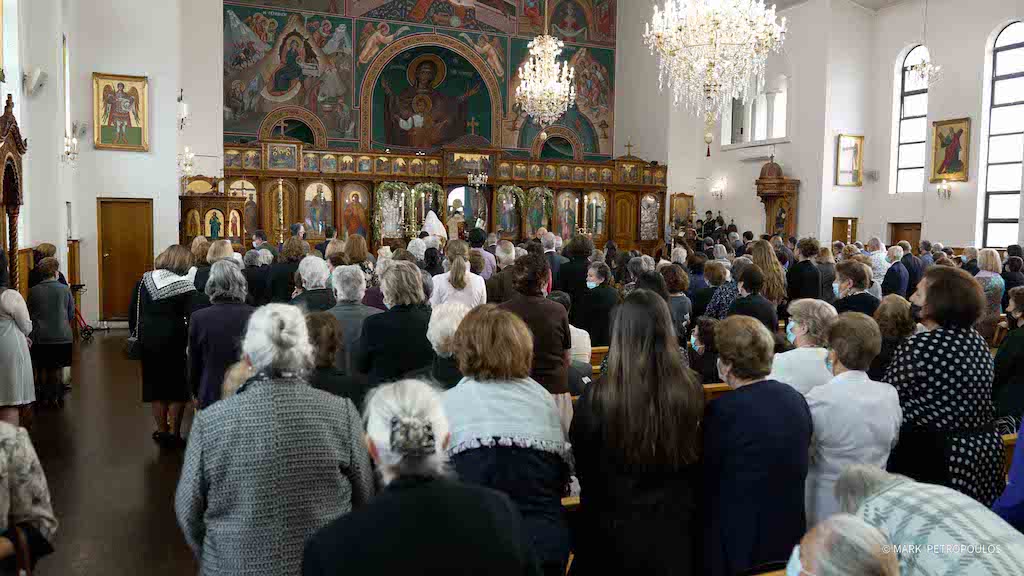 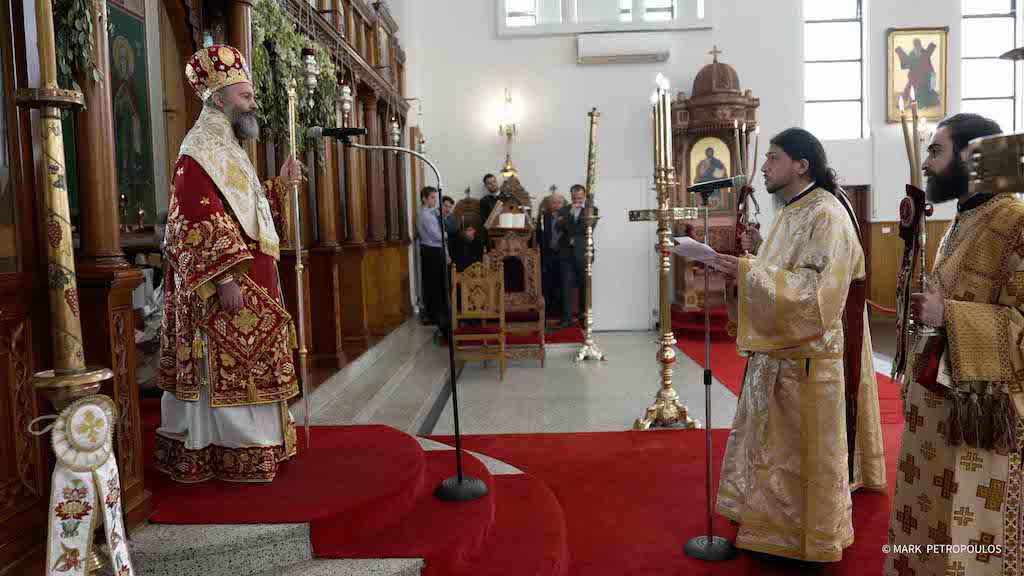 Feast of St. Spyridon was celebrated in Great Yarmouth