Amman: A pan-Orthodox dialogue is necessary for reconciliation in Ukraine

Following the initiative for dialogue and reconciliation announced by the Patriarchate of Jerusalem, and Patriarch Theophilos III in November 2019, the Amman Fraternal Familial Gathering was hosted today in the capital of Jordan, with attendance of Primates and Delegations from various Orthodox churches. The purpose of the gathering was to renew dialogue and promote unity between brothers within the Orthodox Communion.

On the conclusion of the gathering, the Primates and Delegates issued the following statement:

On February 26, 2020, a meeting of Primates and representatives of Local Orthodox Churches was held in Amman, Jordan, with the primary view of unity and reconciliation within Holy Orthodoxy. The participants noted their understanding of the anguish of the Patriarchate of Jerusalem for the imminent danger of schism within our Orthodox Communion.

The participants expressed their gratitude to His Majesty King Abdullah II, King of the Hashemite Kingdom of Jordan and Hashemite Custodian of the Christian and Muslim Holy Places in the Holy Land and to the people of Jordan for facilitating the hosting of this gathering in their capital city, Amman, noting His Majesty’s outstanding work in promoting interfaith dialogue internationally.

The participants also thanked the Patriarchate of Jerusalem and His Beatitude Patriarch Theophilos for all the relentless efforts aimed at paving the way for dialogue and bringing brothers together in the precious spirit of unity, noting that the light that emanates from Jerusalem stands as a witness to that Holy City which continuously proclaims its multi-faith and multicultural tapestry rejoicing in its existence as the warm home for the three Abrahamic faiths, Christianity, Judaism and Islam.

The delegations declared that this gathering was to strengthen the fraternal bonds between brothers and their churches, to promote the bonds of peace in Christ among them, to advocate for the unity of the Orthodox churches, and to renew dialogue in the prayerful hope of bringing reconciliation where there has been discord.

In the atmosphere of fraternal love, those gathered for the meeting agreed that decisions concerning issues of Orthodox-wide importance, including the granting of autocephaly to particular Churches, should be finalised in a spirit of pan-Orthodox dialogue and unity, and with pan-Orthodox consensus.

Concerning the current ecclesiastical situation in the Ukraine the participants also recognised that a pan-Orthodox dialogue is necessary for healing and reconciliation.

In the matter concerning North Macedonia, the delegations stated that this matter is to be solved through dialogue within the Serbian Orthodox Church and with pan-Orthodox support.

Regarding Montenegro, the participating delegations urged the relevant authorities to respect and uphold the fundamental right of ownership of property including that of the Church.

The delegations agreed that they should gather as brothers, preferably before the end of this year, to strengthen the bonds of fellowship through prayer and dialogue. The participants hope that His Holiness the Ecumenical Patriarch Bartholomew with his known seniority of honour (πρεσβεια τιμήs) will join this dialogue along with his brother Primates.

The delegations embraced the call of their brother Patriarch Theophilos III to hold a prayer for the world, for an end to war, sickness and suffering, and for all the Christians as well as for the unity of the Orthodox Church. This prayer is to be held in the Mother Church, the Church of the Resurrection (Holy Sepulchre) in Jerusalem, before the Holy Tomb of Christ, from which He rose and proclaims peace to the world. 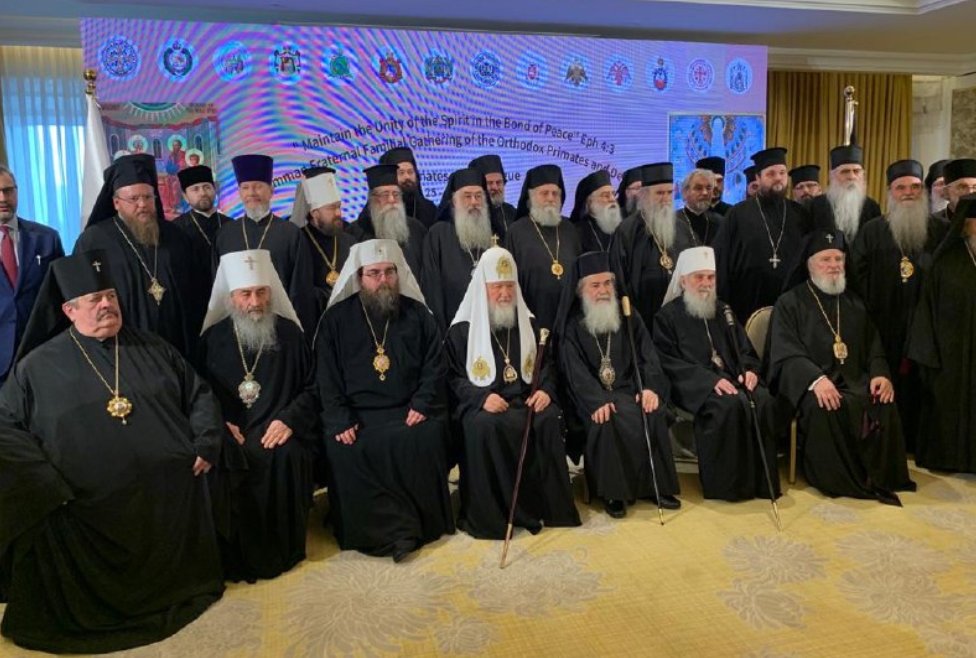 Encyclical of Archbishop of America for Holy and Great Lent 2020