A timeline of the Veneration of the Relic of St. Nectarios’ Right Hand in Scandinavia

The faithful of the Mother Church of Constantinople in Scandinavia welcomed the relic of the right hand of the popular saint Nectarios of Pentapolis the Wonderworker with great joy and religious fervor from Thursday, September 1, 2022, through Sunday, September 4, 2022, amidst services and events that stood out for their ecclesiastical radiance and order.

The venerable relic was transported to the Ecumenical Patriarchate’s northernmost eparchy by Archimandrite Fr. Damaskinos Mourtzis for the spiritual strengthening of the local flock, following the request of Metropolitan Cleopas of Sweden and All Scandinavia to Metropolitan Ephraim of Hydra, Spetses, and Aegina and the Monastic Council of the Holy Trinity Convent in Aegina.

On Thursday, September 1st, Metropolitan Cleopas was on hand for the reception of St. Nectarios’ right hand at the Annunciation of the Theotokos Metropolitan Church in Oslo, where the Divine Liturgy was celebrated, along with a blessing of the water service marking the occasion of the feast of the Indiction and new ecclesiastical year. The Metropolitan presided over the services in chorostasia and was accompanied by the Archimandrites Frs. Damaskinos Mourtzis, Bartholomew Iatridis, and Alexandros Loukatos, as well as Economos Fr. Maxime Lesage.

That same afternoon, the sacrament of Holy Unction was celebrated, along with a supplication service to St. Nectarios, with Fr. Damaskinos Mourtzis delivering the sermon. The services were attended by the Ambassador of Greece to Norway Anna Korka, along with embassy staff members Konstantinos Danassis, Panagiotis Lykoskoufis, and Lambros Kokonos.

During his stay in Oslo, the Metropolitan joined Ambassador Korka and her aides for lunch at her invitation, accompanied by Fr. Alexandros. That evening, he dined with the clergy in his entourage at the home of longtime parishioner Mrs. Angeliki Kruse-Jense, while he also had the opportunity to interact with parishioners from Oslo and parish council members of the aforementioned metropolitan church, to whom he offered heartfelt thanks for their support of the local Church’s ministry.

The next day, Friday, September 2nd, St. Nectarios’ venerable relic was received at the St. Paul the Apostle Church in Uppsala by the faithful of the surrounding area, where the office of Vespers was held for the feast of the translation of the relics of St. Nectarios, with Metropolitan Cleopas presiding in chorostasia and accompanied by the Archimandrites Frs. Sosipatros Stefanoudis, Damaskinos Mourtzis, Bartholomew Iatridis, and Alexandros Loukatos. The sermon for the evening was delivered by Fr. Alexandros.

On Saturday, September 3rd, St. Nectarios’ venerable relic was received at the St. George Cathedral of Stockholm, where the archieratical Divine Liturgy was celebrated and presided over by Metropolitan Cleopas, who was assisted by the aforementioned clergy. Fr. Sosipatros Stefanoudis delivered the day’s sermon.

The Ambassador of Greece to Sweden Andreas Fryganas was in attendance, while the hymns were chanted by Dr. Andreas Selamsis, Dr. Georgios Sidiras, Ilias Gergi, and Eliana Antoniou.

That same afternoon, the sacrament of Holy Unction was celebrated, together with a supplication service to St. Nectarios, with the Metropolitan presiding in chorostasia and assisted by Frs. Bartholomew Iatridis and Alexandros Loukatos.

Afterwards, there was a screening of the film Man of God held on-site at the Cathedral. The film’s director Yelena Popovic, who traveled from Athens to Stockholm together with her husband Mr. Alexandros Potter, delivered opening remarks together with Metropolitan Cleopas.

That evening, a vigil service was held, dedicated to the 69th anniversary of the translation of St. Nectarios’ relics. Metropolitan Cleopas presided over the service in chorostasia and was assisted by Frs. Alexandros and Bartholomew, with the latter delivering the sermon.

In his sermons, the Metropolitan frequently expressed his gratitude to all those who contributed to the successful organization of the holy services honoring St. Nectarios, including the clergy, parish council members, and chanters.

He also conveyed his gratitude to Metropolitan Ephraim of Hydra, Spetses, and Aegina, as well as the Abbess and monastic council of the Holy Trinity Convent in Aegina for granting their permission and so graciously responding to the request of his eparchy regarding the veneration of St. Nectarios’ relic. Additionally, he thanked Archimandrite Fr. Damaskinos Mourtzis for transporting the holy relic, and for ministering to the spiritual and liturgical needs of various parishes in Scandinavia on many occasions in the past.

Metropolitan Cleopas went on to thank Fotini Batsela, President of the Ladies Philoptochos Society of the Cathedral, for the dinner she offered in honor of the visiting clergy and laypersons who accompanied the Metropolitan, as well as local businessman Christos Meletis for sponsoring the luncheons, the ownership of the Cypern Restaurant in Stockholm for providing dinners for the clergy and guests of the Holy Metropolis, and Nikolaos Kitsios for his technical assistance during the presentation of the film Man of God and the live streaming of the holy services and sermons. 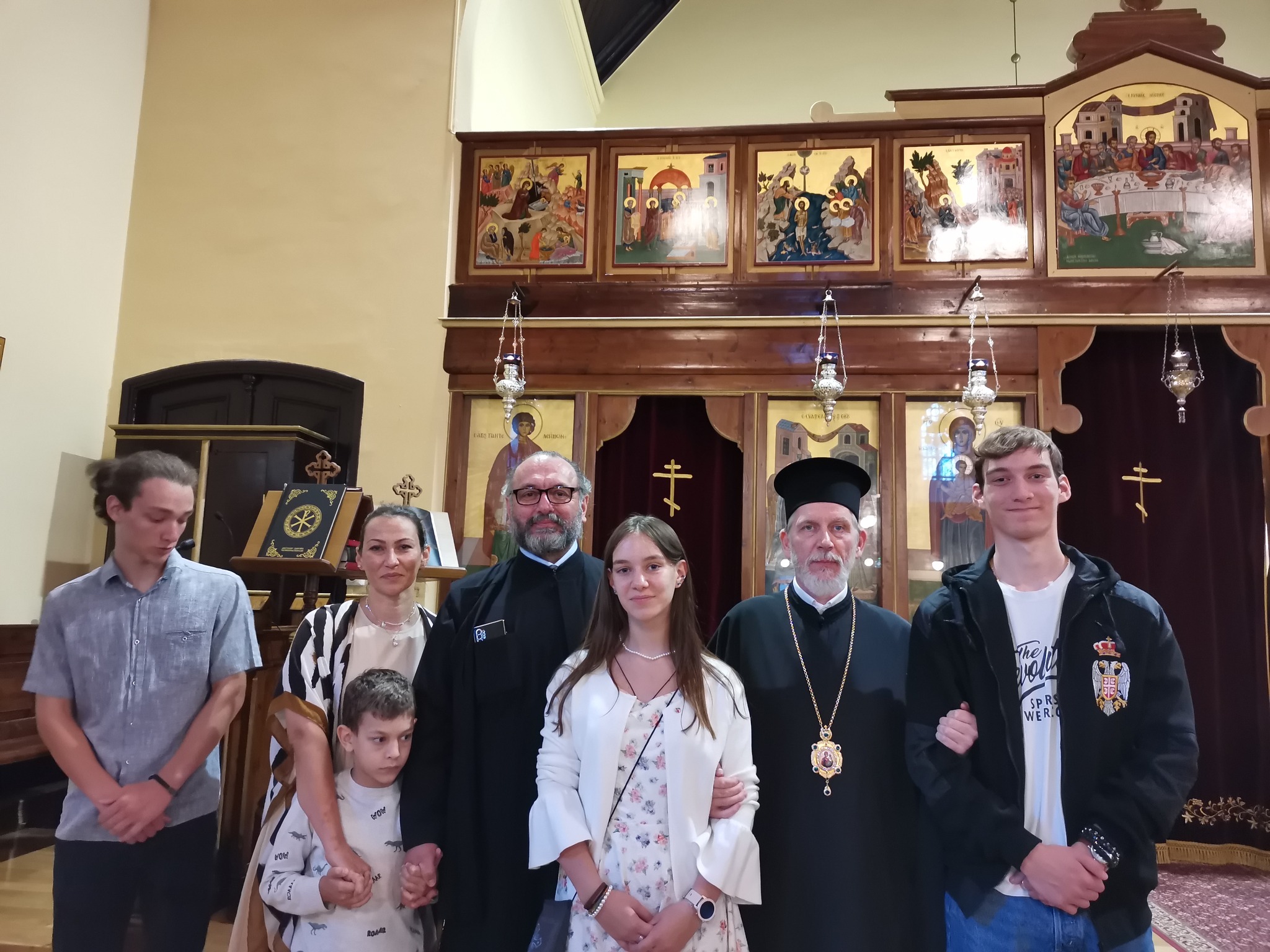 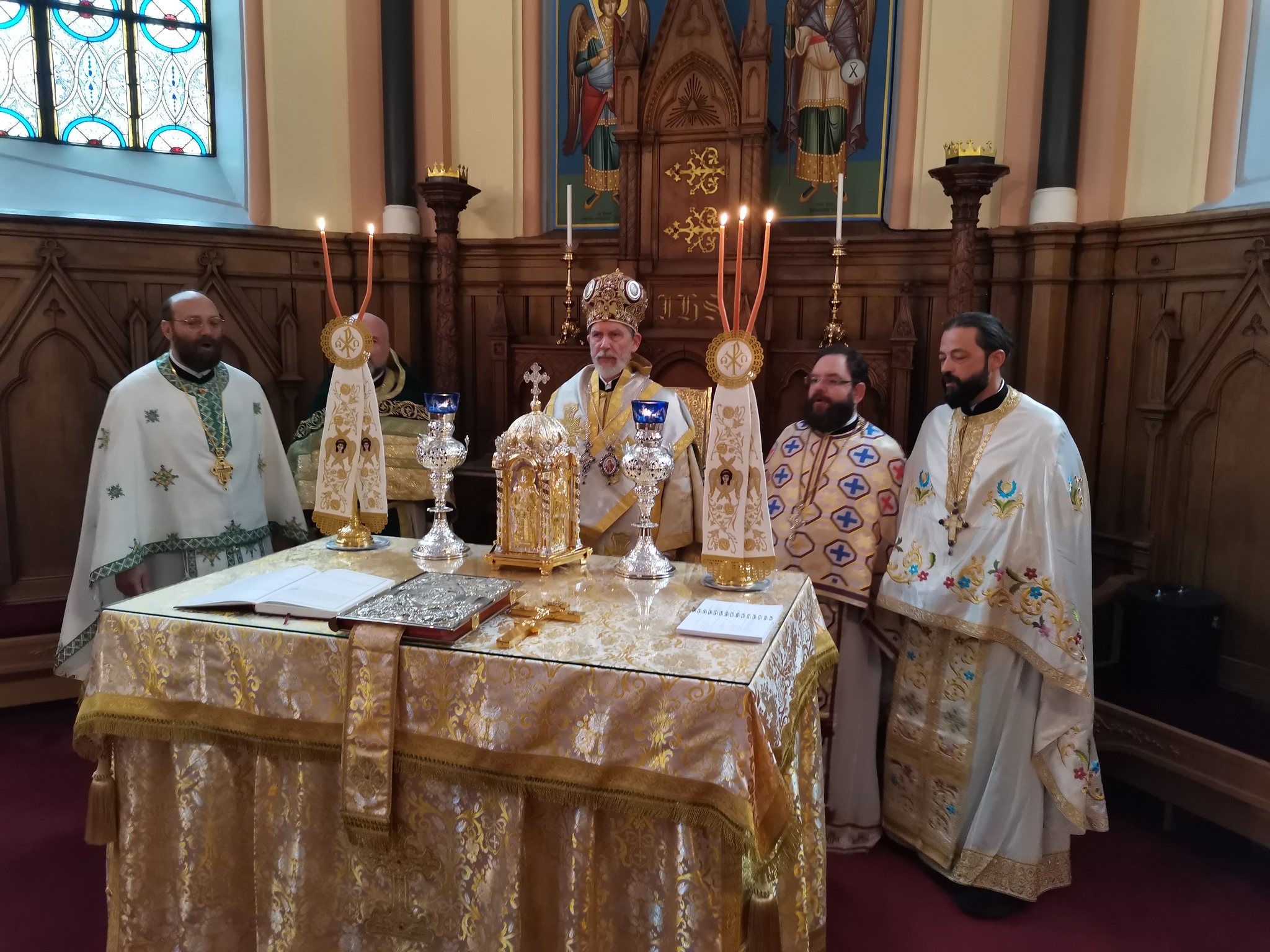 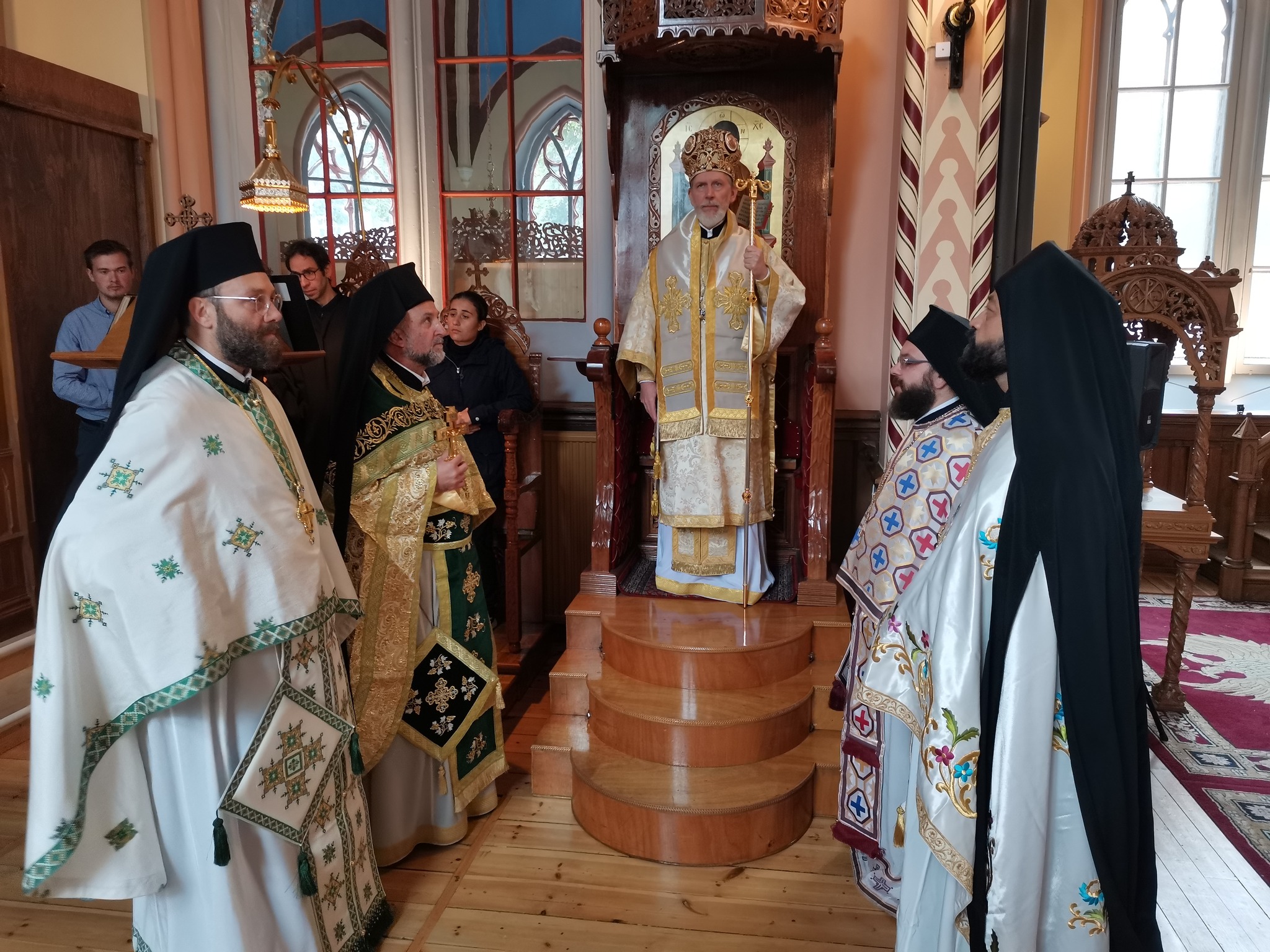 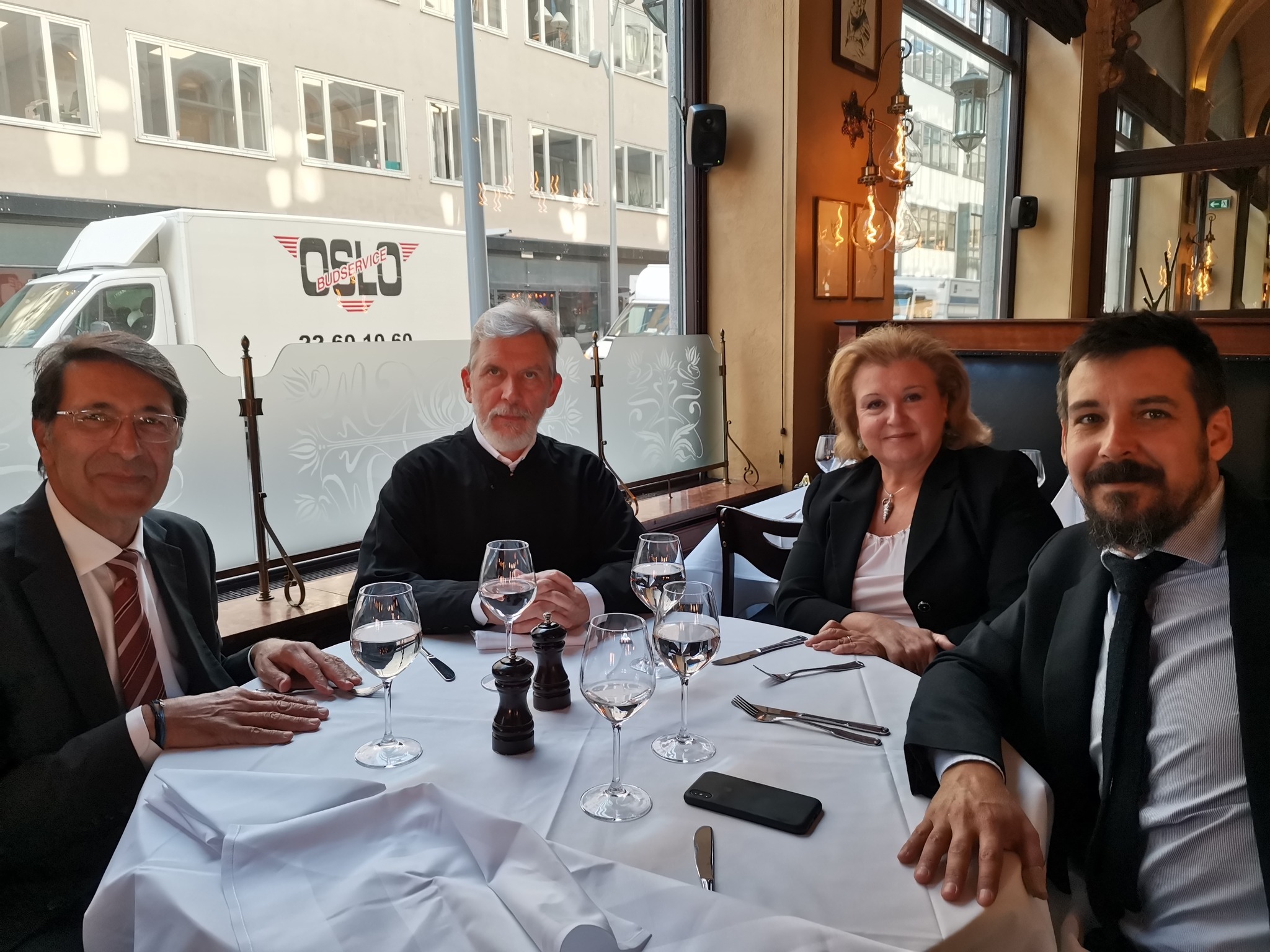 Celebration of Epiphany and Cutting of the Vasilopita in Iceland

Metropolitan of Sweden to make his 7th pastoral visit to Iceland

Metropolitan of Sweden to make pastoral visit to Kalmar

Gerontissa Theodosia of the Monastery of St. Ephraim, Nea Makri, fell asleep in the Lord