In his letter in English in which he avoided using words such as “synaxis” or “synod,” something that would confront him with the holy canons of the Church, the Patriarch of Jerusalem invited Ecumenical Patriarch Bartholomew and the other primates of the Orthodox Churches in Jordan for a “fraternal gathering in love,” a term coined by him.

Following what he stated in Moscow after his meeting with the President of Russia, Vladimir Putin, the Greek Orthodox Patriarch of Jerusalem proceeds with his initiative to “find peace among the Churches,” as he claimed, by sending an invitation to the Orthodox primates for this “fraternal gathering in love” to be held by the end of February.

In his letter brought to light today by orthodoxia.info, after having explained the prominent place of the Patriarchate of Jerusalem in the Holy Land and its historic interventions to maintain peace in the region, Patriarch Theophilos announced that he had decided to build a bridge among the Orthodox Sister Churches so that they can stand together against the trials of our times.

“As it had always played similar roles in the past, and during different tenures through the Church’s history, the Patriarchate of Jerusalem, guardian of the Church of the Resurrection and the Tomb of Our Lord Jesus Christ, is laying a bridge for its sisters Orthodox Churches to walk and stand together in these most testing of times,” wrote in his letter Patriarch Theophilos.

The Patriarch’s attempt is evident in the text, that is, to avoid using words and phrases in respect of which he might be accused of violating the holy canons. For that reason, he used words and phrases which could have led to at least two or more interpretations.

The acts of the Patriarchate of Jerusalem on this issue have so far remained a closely guarded secret. Despite the importance of his initiative, as Patriarch Theophilos himself described it, he has not made any public statements or press release, and when he was asked more the acts of Jerusalem Patriarchate, the Chief Secretary of the Holy Synod, Archbishop Aristarchos of Constantina, said that he could not make further statements without the blessing of his Patriarch.

It is noteworthy for historical reasons that the Patriarch of Jerusalem, who cited unity and love to justify his intervention in the powers of the Ecumenical Throne, has ceased communion with the Patriarch of Antioch over the last six years due to a disagreement over jurisdiction in Qatar where only one parish exists! 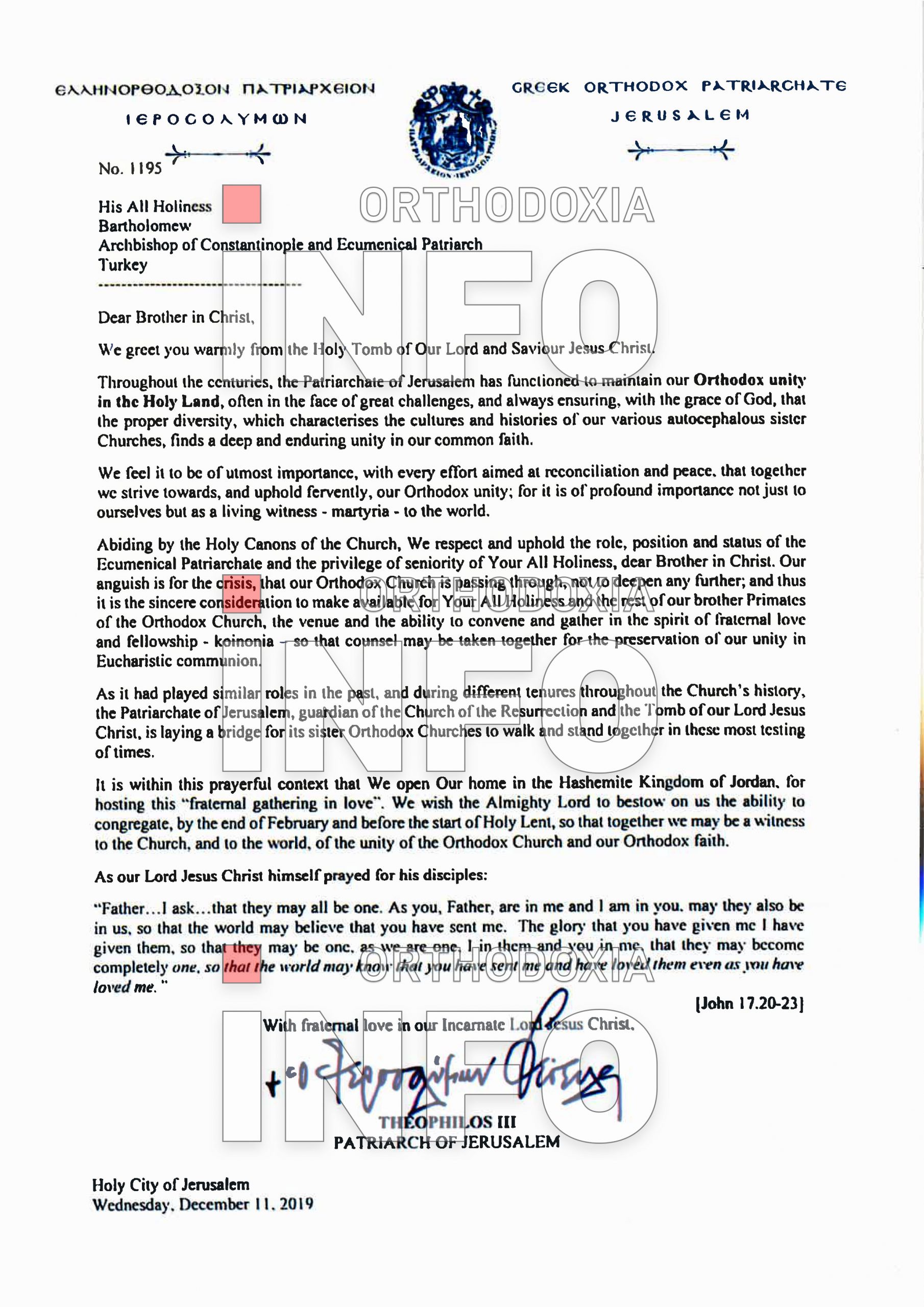