Prof Krastu Banev was ordained to the Holy Diaconate at the Church of St. Demetrios Edmonton

On Saturday, July 23, 2022, Prof Krastu Banev was ordained to the Holy Diaconate and given the name Nikitas at the Church of St. Demetrios in Edmonton, London.

Archbishop Nikitas presided during Matins and concelebrated the Divine Liturgy with Bishop Raphael of Ilion. Among those concelebrating was the Very Revd Archimandrite Nephon Tsimalis, Director of the Office of the Archbishop, Archpriest Alexander Fostiropoulos, Protopresbyter Christos Stephanou, Oeconomos John Hookway, Oeconomos Kristian Akselberg, Fr Trayan Goranov, Archdeacon Dr Georgios Tsourous and the Deacons Gervasios Kazakos, Konstantinos Mamouris and Kenneth Parker among other Clergy of the Holy Archdiocese. The truly joyous day concluded with a hospitable reception honouring the wonderful event in the life of the Church.

The ordination address of Deacon Nikitas follows below:

As I stand on the steps leading to the Holy Altar, I humbly ask for everyone’s ardent prayers. In the Gospel reading for today we heard of the healing of the woman who had been sick for twelve years. The number twelve we can read as a symbol of the totality of the human life. The sickness of the woman had also been one that had affected her whole body, her whole life. A miracle took place, and she was completely healed by touching the garment of Christ. So, in this story, we have an image of totality, of completeness. In another passage, Christ likens the Kingdom to a treasure buried in a field, or to a priceless pearl. When someone finds these treasures, they sell everything, they leave everything and with great joy they possess the treasure they have found, or the pearl they have purchased. We can also imagine the great joy of the woman who returned home completely healed, and the joy of the people who stood around her and witnessed the miracle.

I am currently 47 years old, soon to be 48. The first 24 years of my life I lived in Bulgaria, where I was born in the city of Sofia. When I was 24, I completed my fist degree in Sofia and came to England for further studies. I have now lived here for another 24 years, during which time I completed my doctorate at Cambridge and took up my teaching position at the Department of Theology and Religious Studies at the University of Durham. In the first half of my life, I did not know about the ‘treasure buried in the field’, I had never heard of the ‘pearl beyond all price’ and I had never reflected on the story of the woman that was healed after twelve years of sickness. I grew up in a world where very few of my friends had been baptized. My own baptism took place when I was 19 years old. Prior to this we had never celebrated Easter in my family, except that we had red eggs and we heard the bells ringing in the distance. But the Church, the life of the Church, the Christian tradition was for us something from the pages of history or, at best, part of our culture.

As a child, my father, who taught me languages, had introduced me to many Latin and Greek inscriptions in the museums of our country and in this way inspired in me the love for the ancient world. As a grown up man, I discovered that he had worked as an archaeologist in the ancient city of Kabyle which has one of the largest Christian basilicas in the Balkans (62×28 meters) with foundations going back to the first half of the 4th century. This was discovered by a team of Bulgarian archaeologists in the 1970s, who also found that next to the church there is a large rectangular baptismal pool. When I visited the site two years ago and walked around the foundations of this pool, I wondered how many people were baptized there in the year 343, when the bishop of that city took part in the large council in Serdica (Sofia).

Clearly, at that time baptism as entry into the life of the Church involved not just one person or one family but the whole town, the whole community. The existence of this Christian civilization was something foreign and unknown to me when I was a student at the Faculty of Earth Sciences in Sofia, where I pursued five years of Geology, studying minerals and crystals, rocks and mountains, petrol and fossils. One of my professors there, Zhivko Ivanov, encouraged me when I said to him in the middle of my degree that I was considering enrolling also at the Faculty of Theology: ‘Of course you should go there! I know the people in Theology, we are best friends!’ And so, my journey to the Church set out along the rails of friendship.

I did not complete my theology education in Bulgaria but in England, where I also met my spouse, Esther. In 2004 we were married in Cambridge by the late Archbishop Gregorios, who in 2008 ordained me a reader in the Church in Leeds where Fr Samuel was the parish priest. I returned to Leeds during the COVID years when Fr Stavros was celebrating there. Today I have come from Durham supported by the prayers of our community there and with the blessing and encouragement of Fr Andrew and Fr Justin.

I stand before Your Eminence and, like the woman healed from her sickness, I feel that my entire life is condensed in this moment. The presence of all the people, their friendship and prayers, the presence of my mother, Liliana, of my father Krassimir whose name was mentioned in the canonical testimonial of Fr John from Walsall who sadly could be with us, the presence of my twin brother Iordan and my elder brother Gencho, of my brother-in-law Aelred and his fiancée Nicky, of Frank and Becky, of Costas our most generous host, of Presvytera Vassilia, of Aunty Celia, Edward, Nelly and my extended English family, of my Bulgarian and my Greek relatives, of Fr Dobromir, Ivelina and Ralitsa, Fr Trayan and his family, of Fr Christos, Gregory, Silouani and Eva, of Fr Nephon, and of friends from far and near – remind me of the Kabyle basilica and its baptismal pool, which was so large that we could perhaps all jump in! And of course, out of the pool one comes out a new person, dressed in a new white garment, with a new name as a Christian facing East when saying prayers in Church. I am very conscious that I now face East and that everyone is behind me. I am conscious of their prayers, and I know that when the vestments are put on me I will remember them because all the tassels and decorations on the vestments of the clergy will remind me of all the people and of their love, or, where no love was shown, of the humility and the experience of growth that came through adversity.

My standing here today came as a result of the two years of COVID isolation, during which time we could not celebrate our feasts, we could not be in church. For Easter 2020, when our parish churches were closed, we went with my family to a ruined monastery in the northeast of England. We got up early and went to see the rising sun, to sing ‘Christ is Risen’ and the Easter songs that we knew. But I missed the Church. Standing at an archaeological site no longer spoke to me or appealed to me. The Church had become alive. It had come out of the archaeological ruins and with it the ancient languages which I had studied had also become alive.”

Archbishop’s response was as follows:

“[…] As you know, Saint Nikitas was a Goth, he preached the word of Christ and because of that he was taken captive and eventually was burned alive, but he gave witness not only through his martyrdom but though his words and his love, through the simplicity of his life. And I pray that you will continue to give witness to all people because we live in a time when the world needs the true witness of Christ and you will do so not only as an educator and a family man, a husband and a father, and still even a son, you will do so by living Christ and walking with him in the most difficult places in life. Do not worry so much about the ways of the world. Worry only about the ways and the path of Jesus Christ! Because he has taken you from the godless stages in life to the days of grace and anointed you with his message, and his truth and his priesthood.” 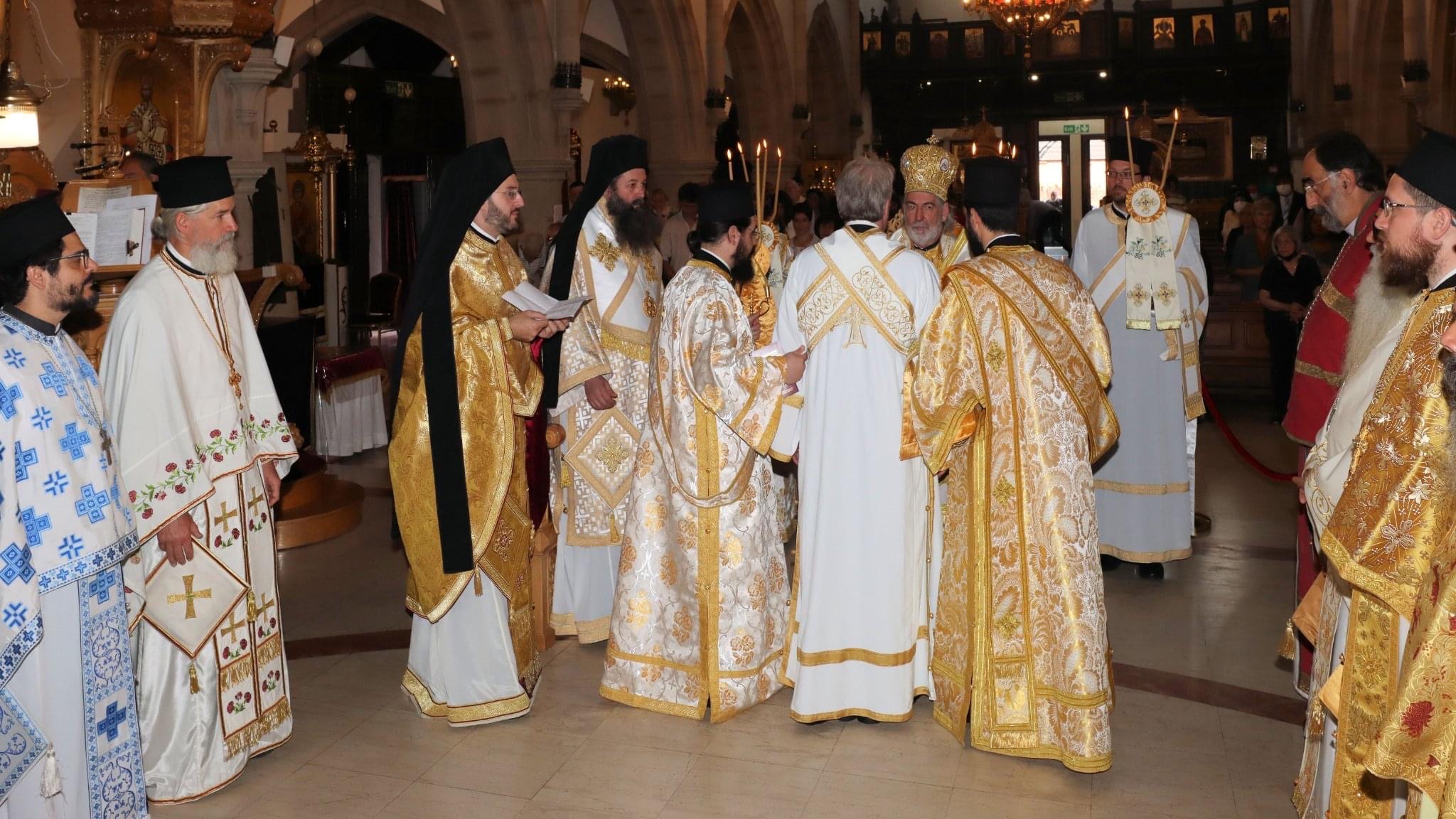 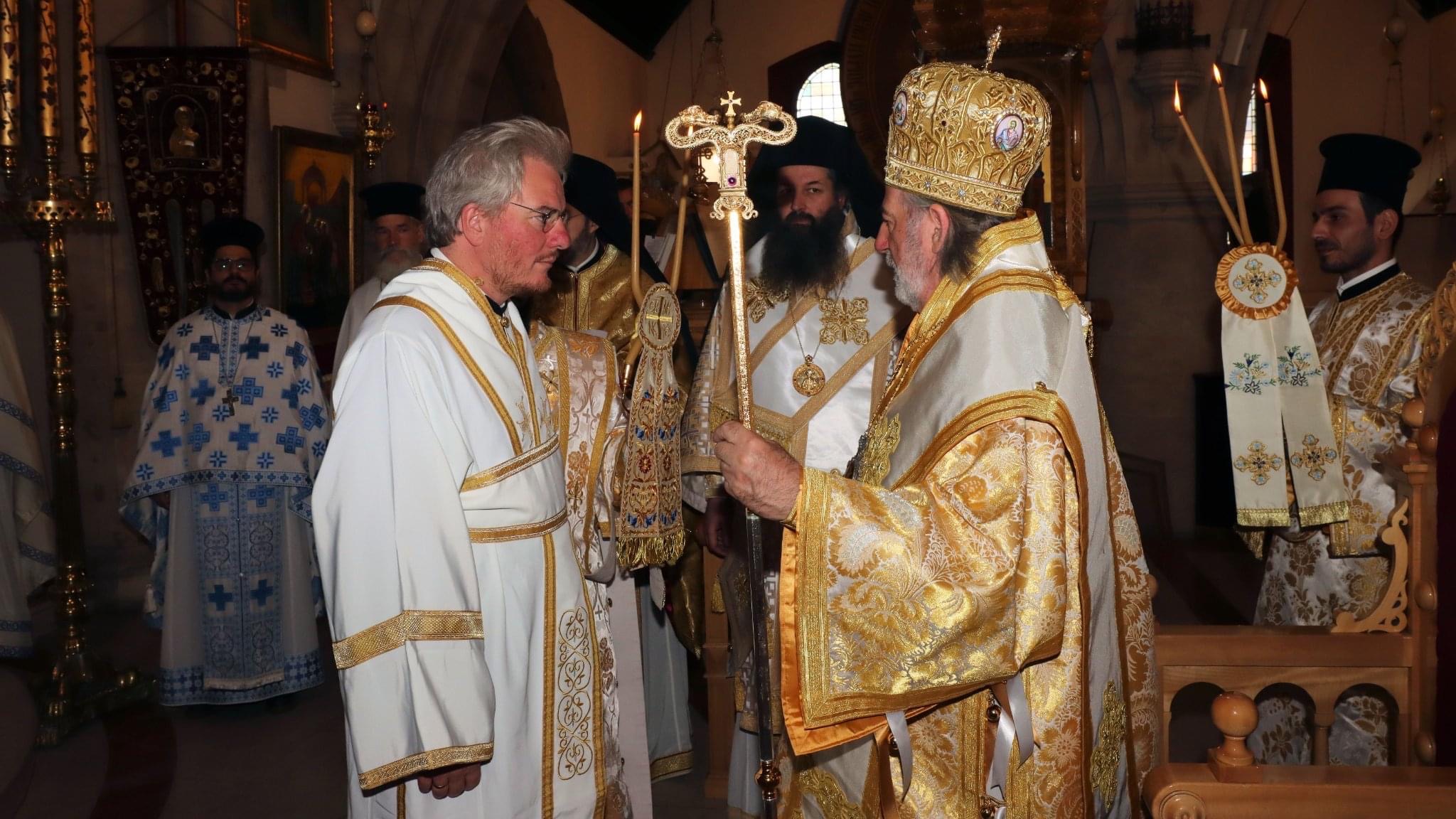 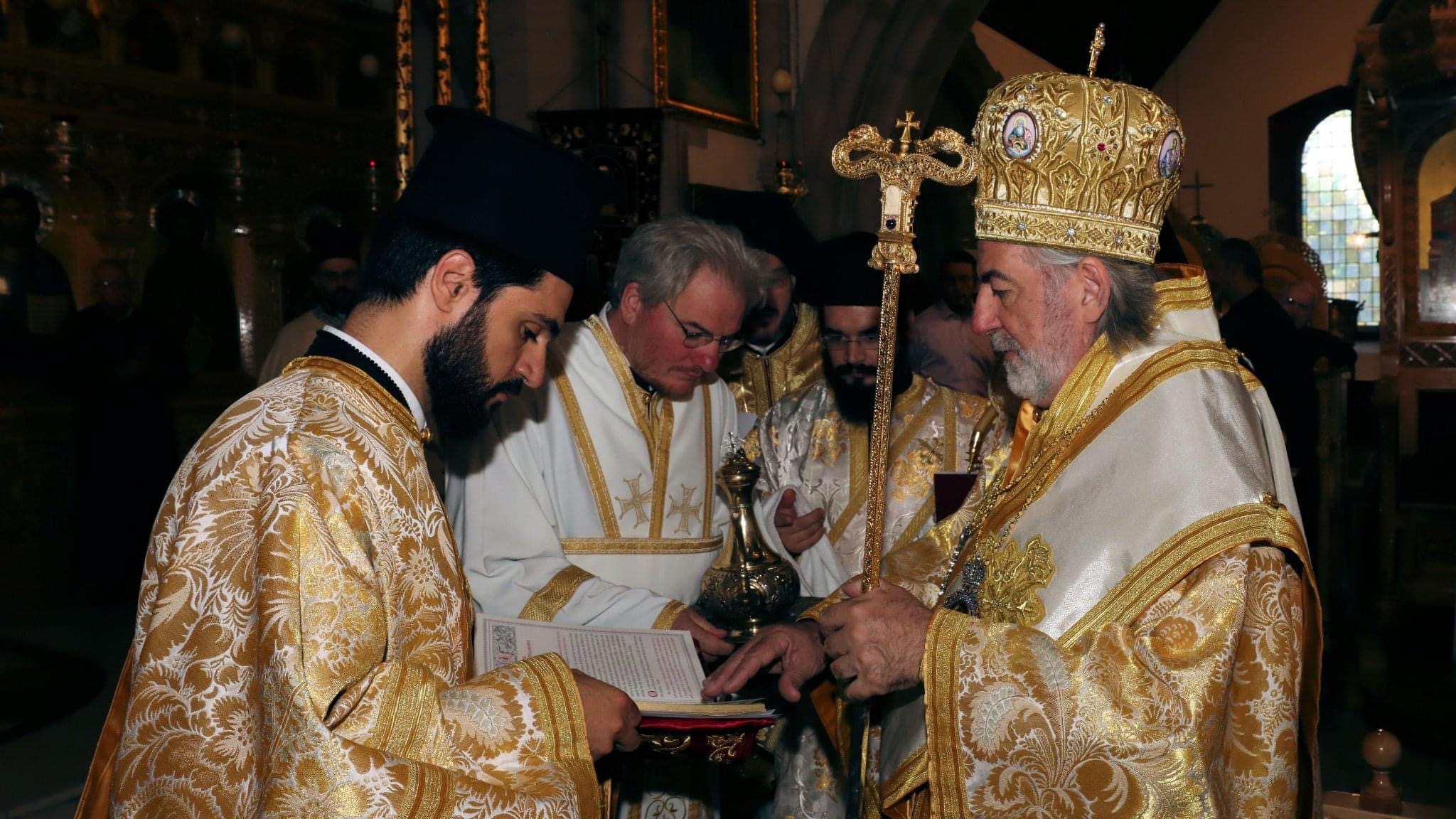 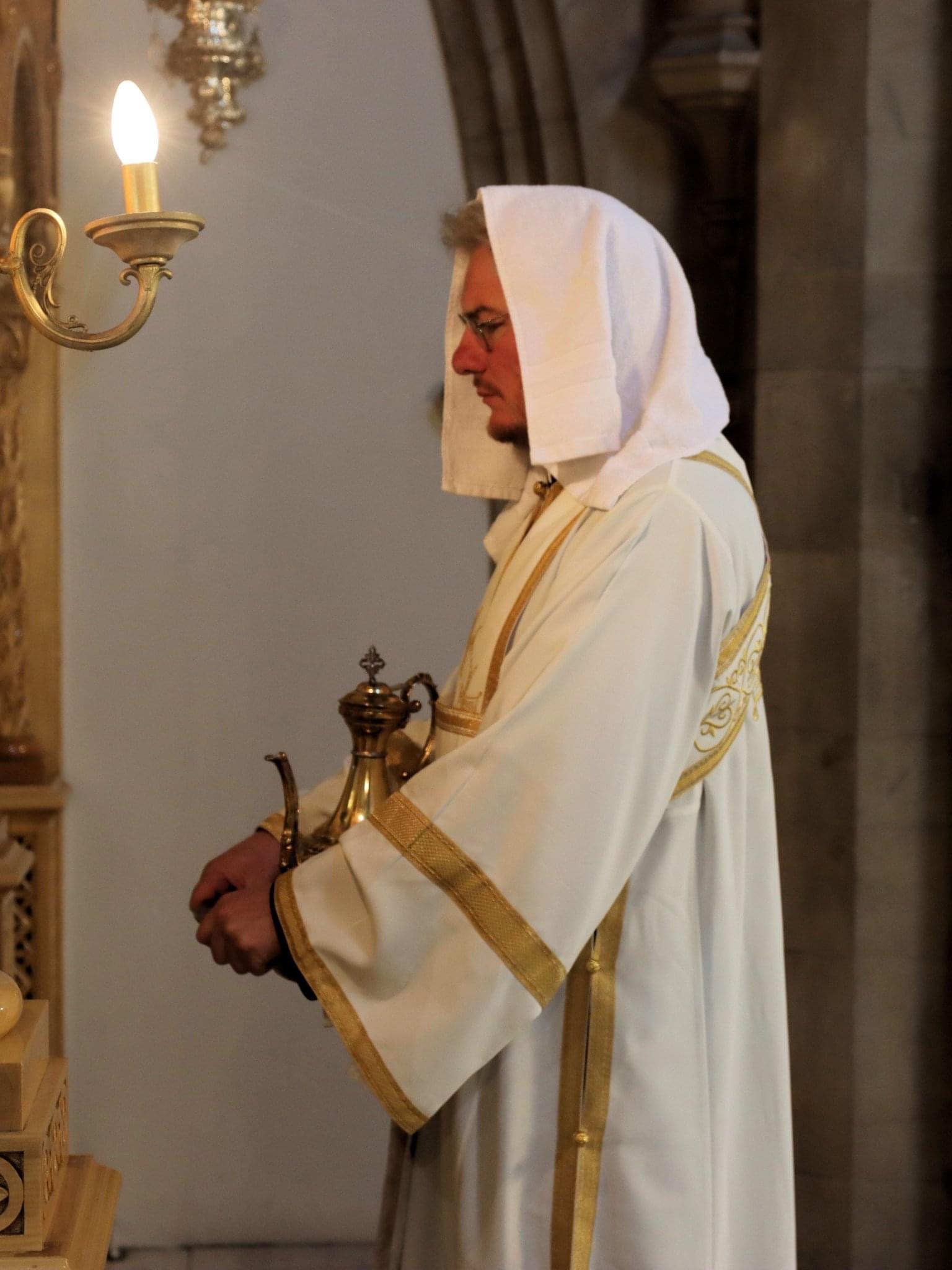 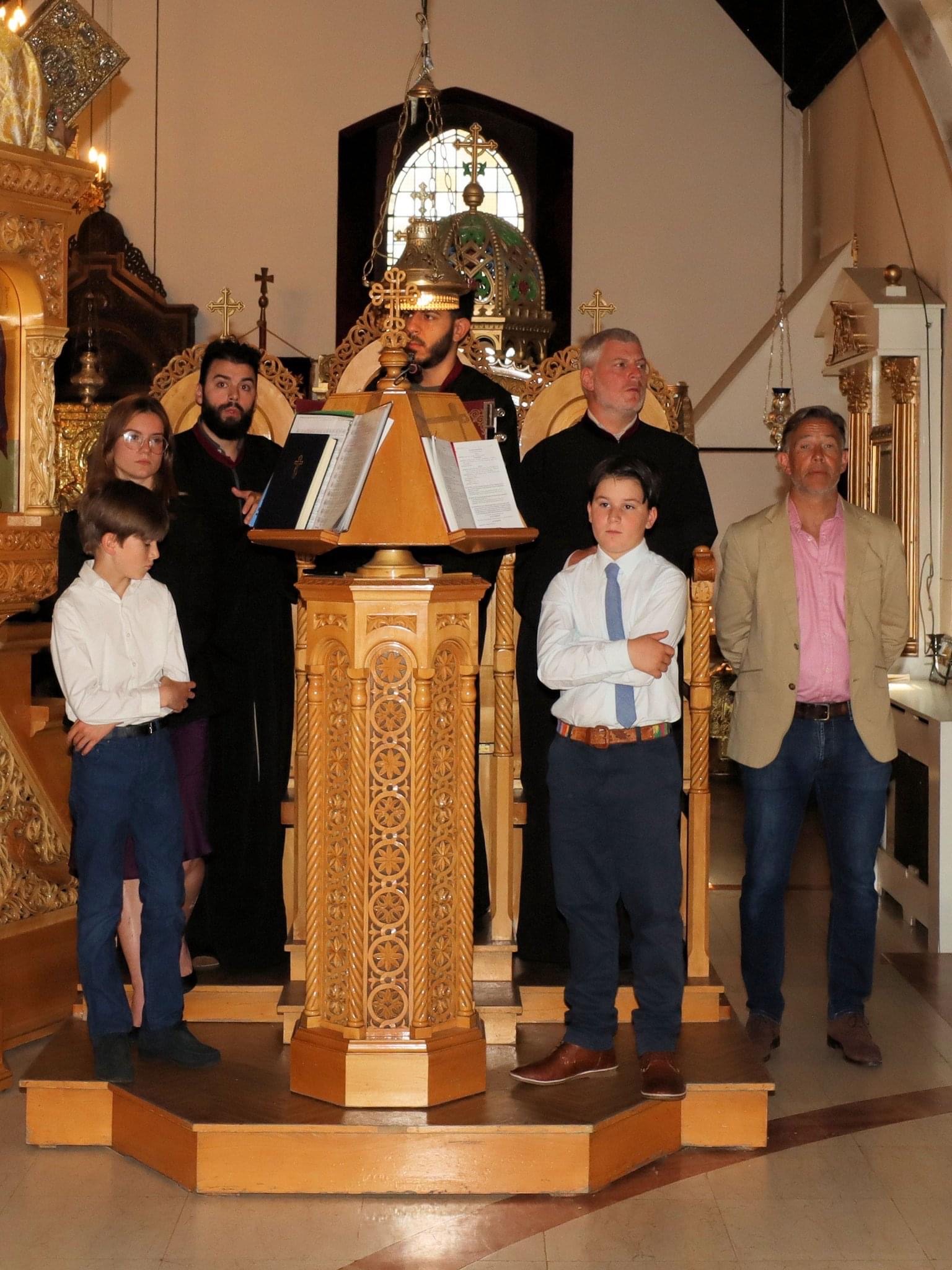 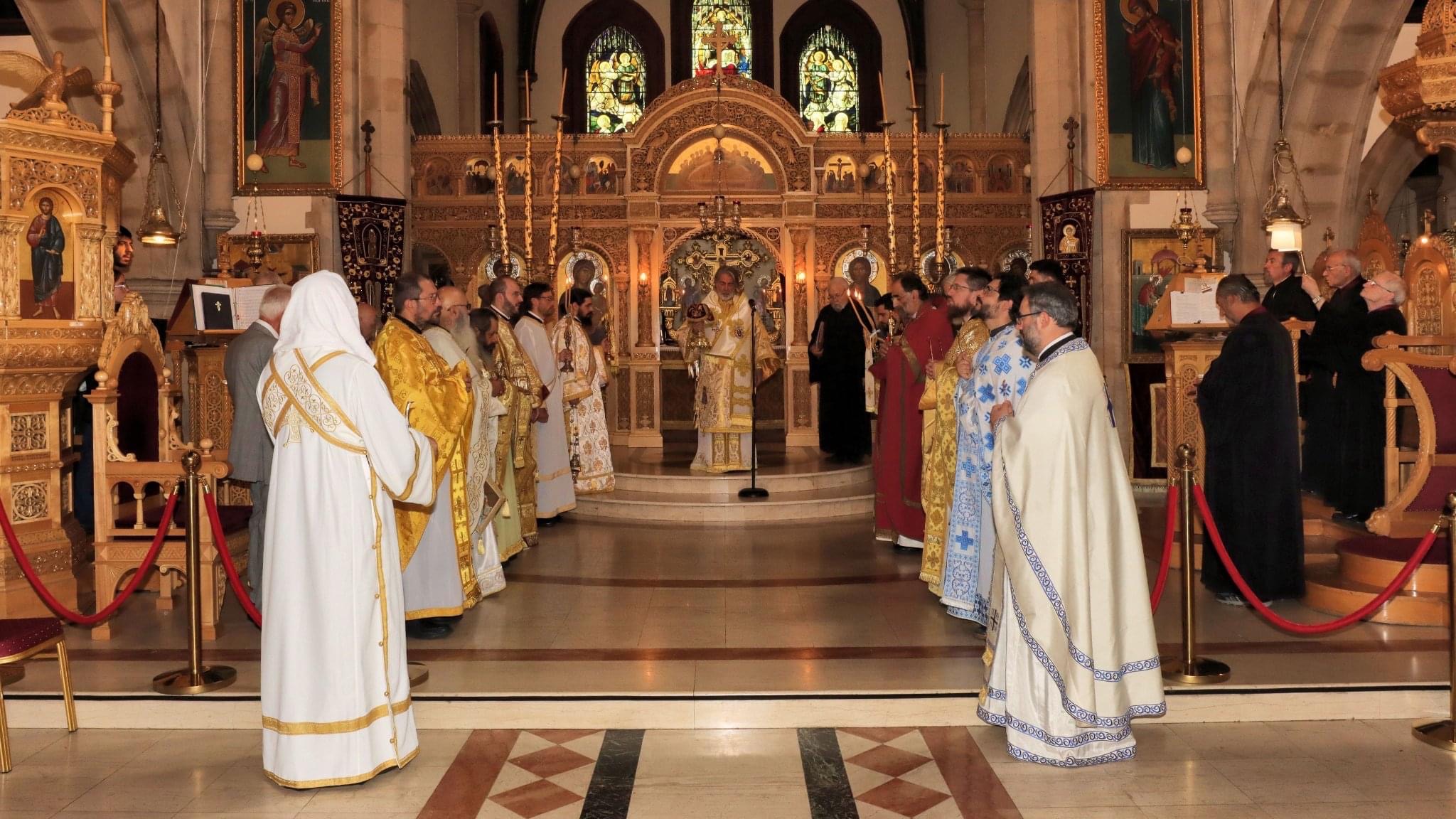 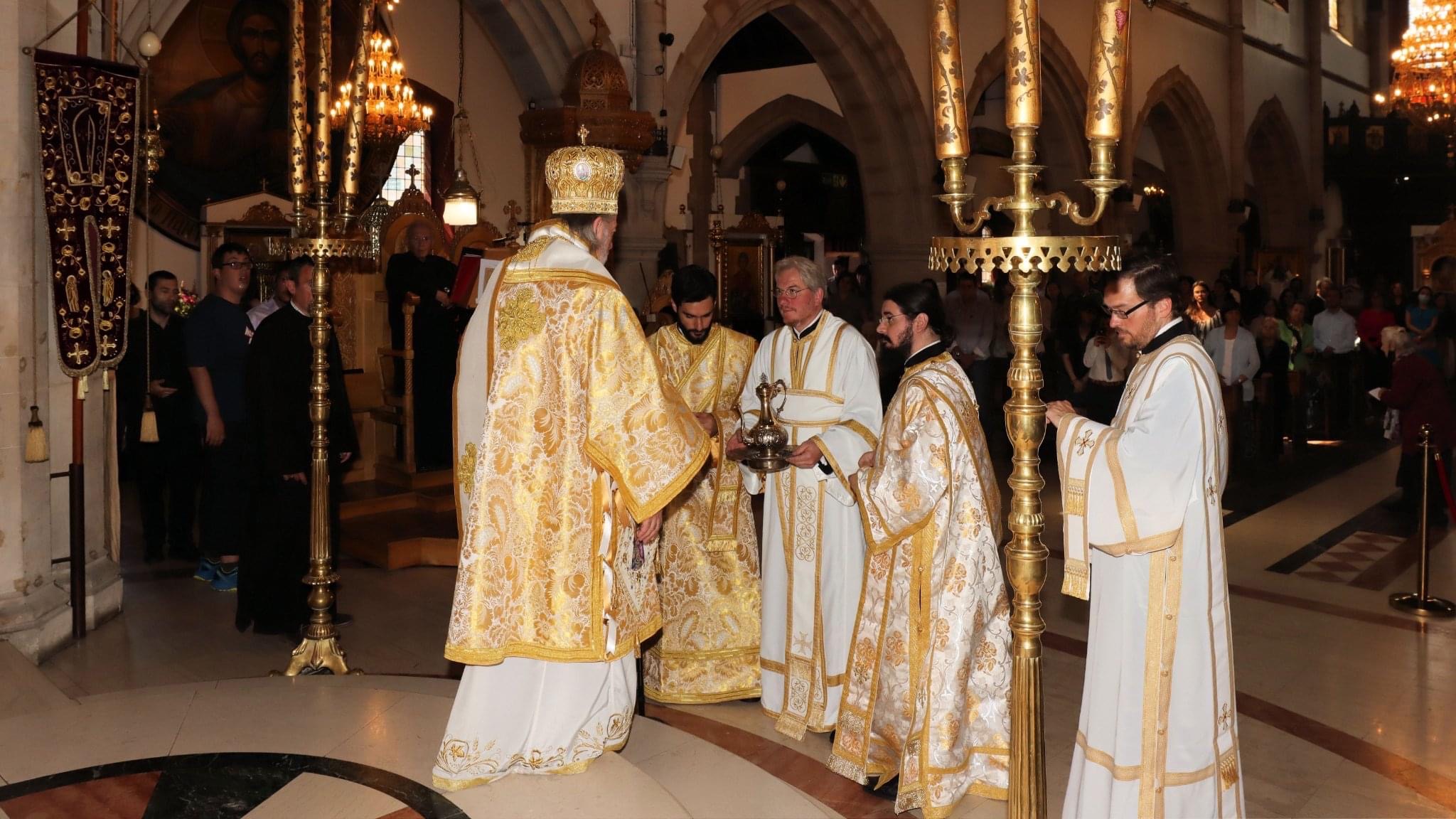 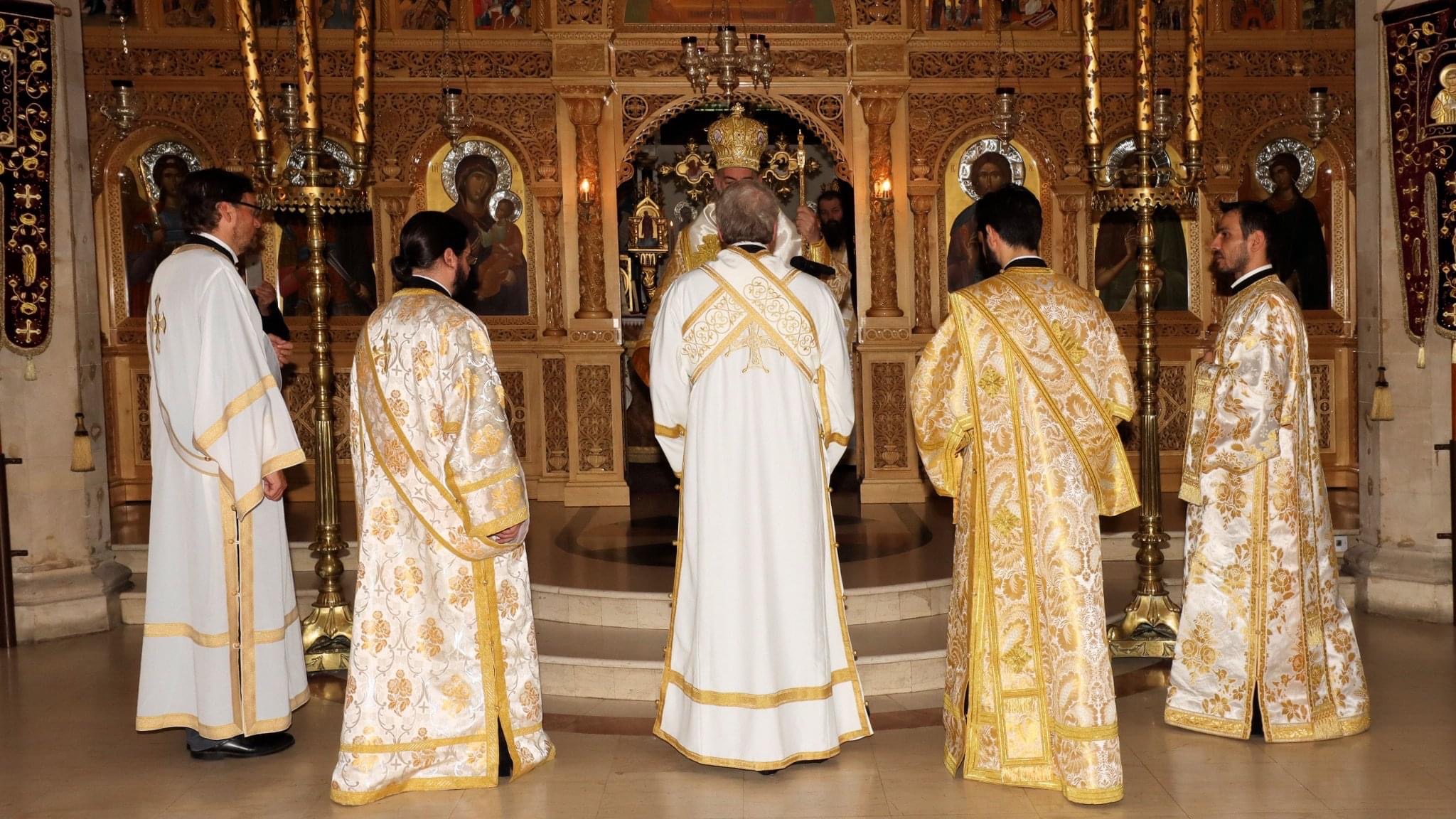 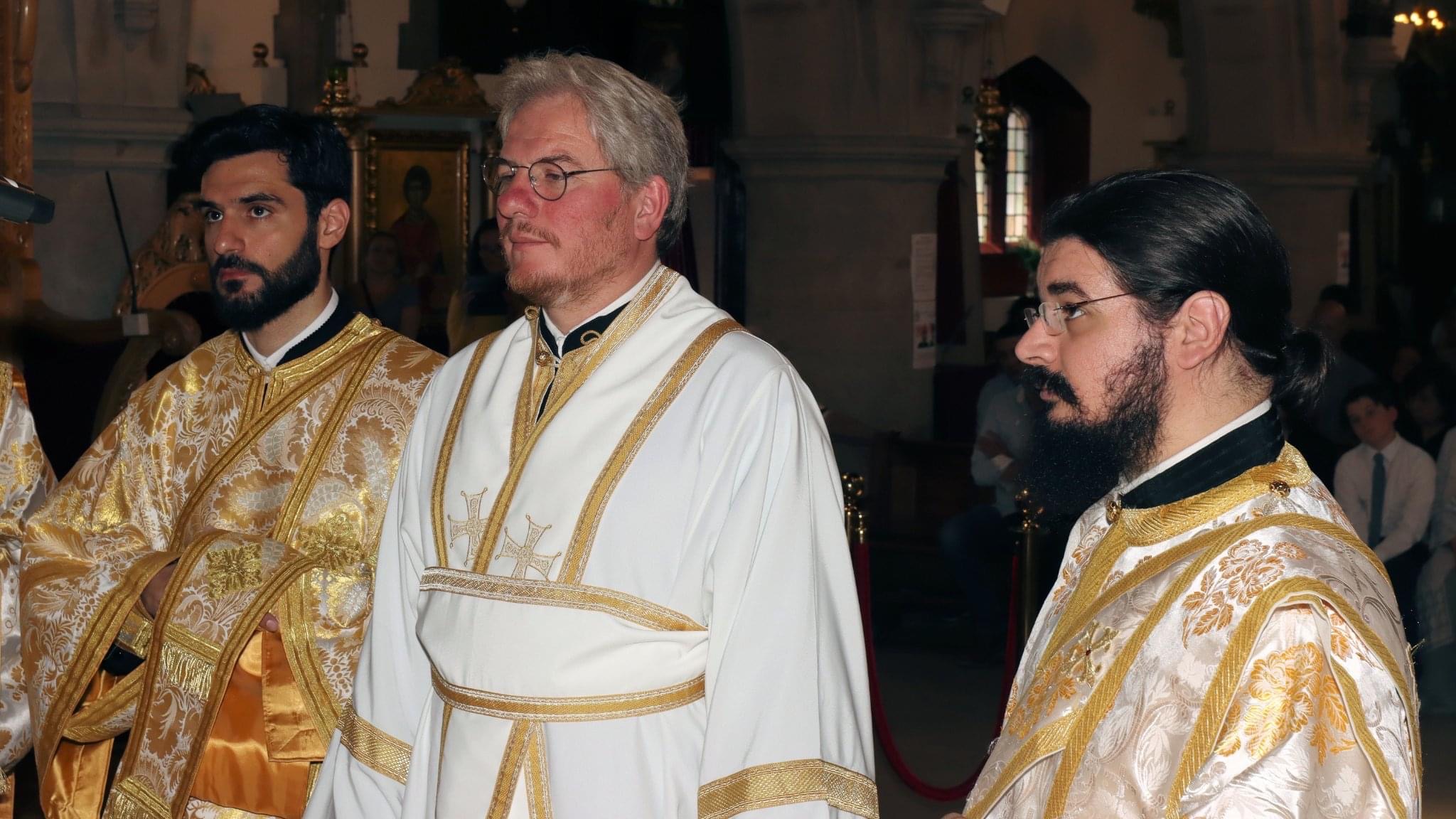 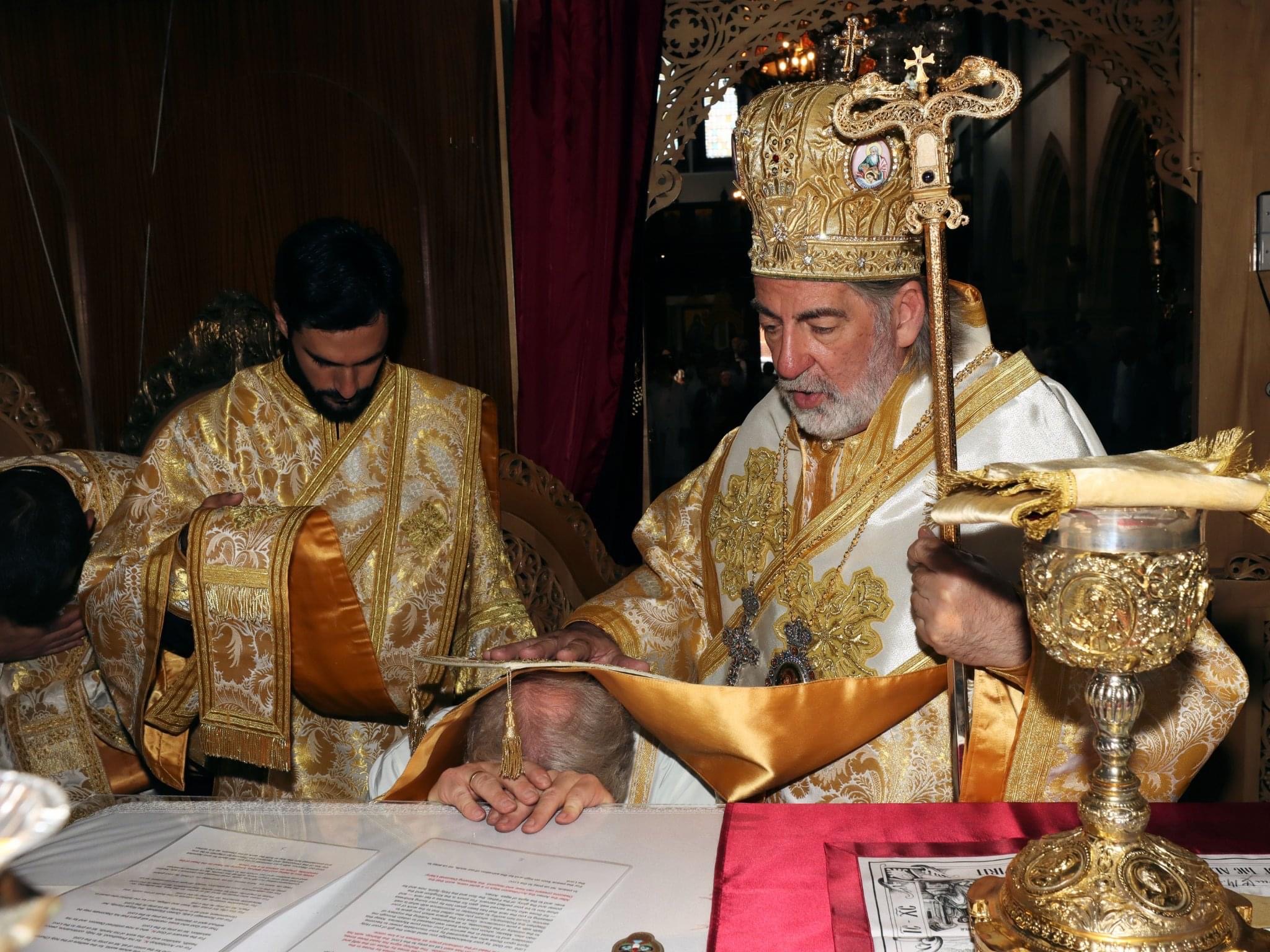 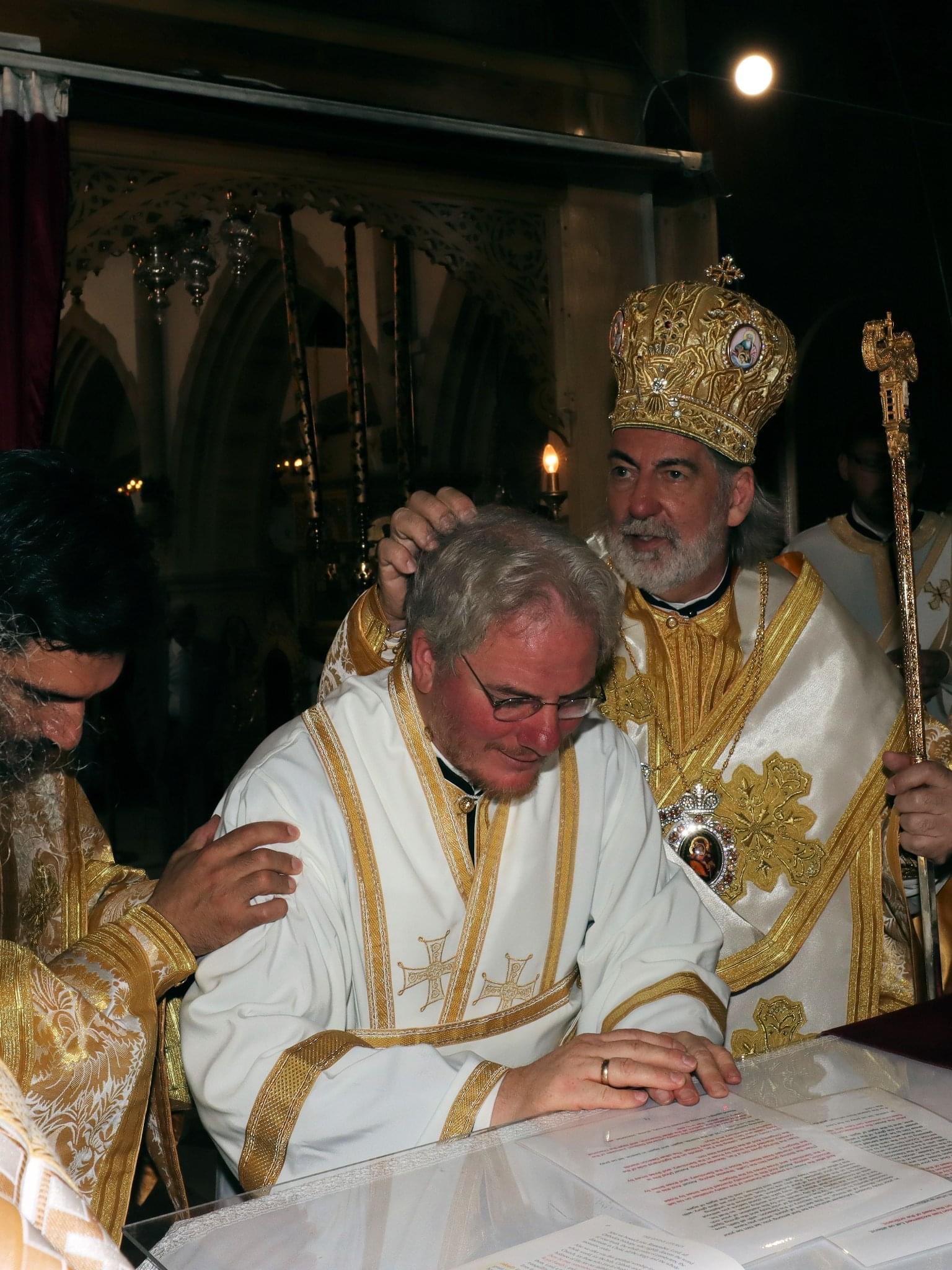 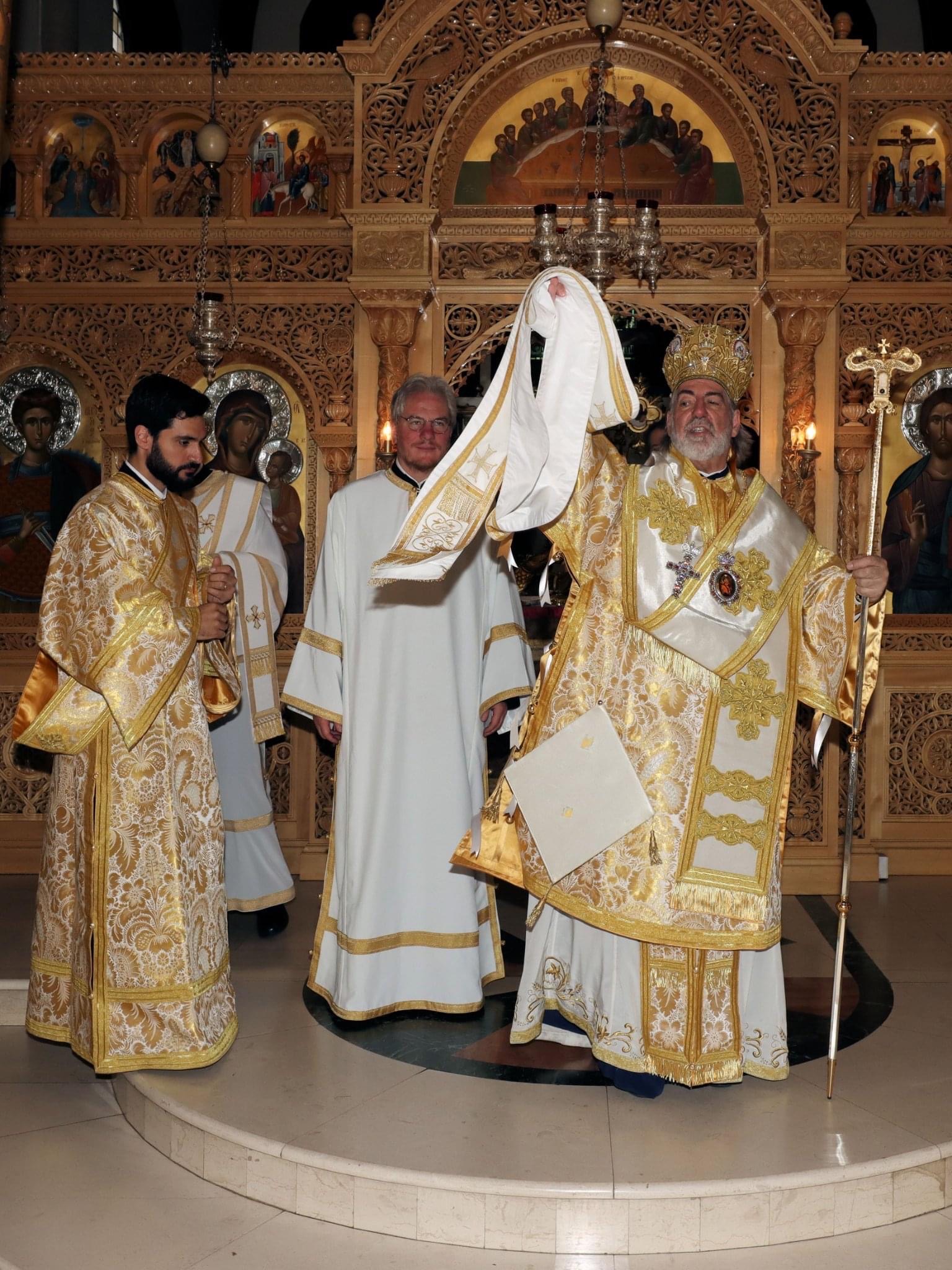 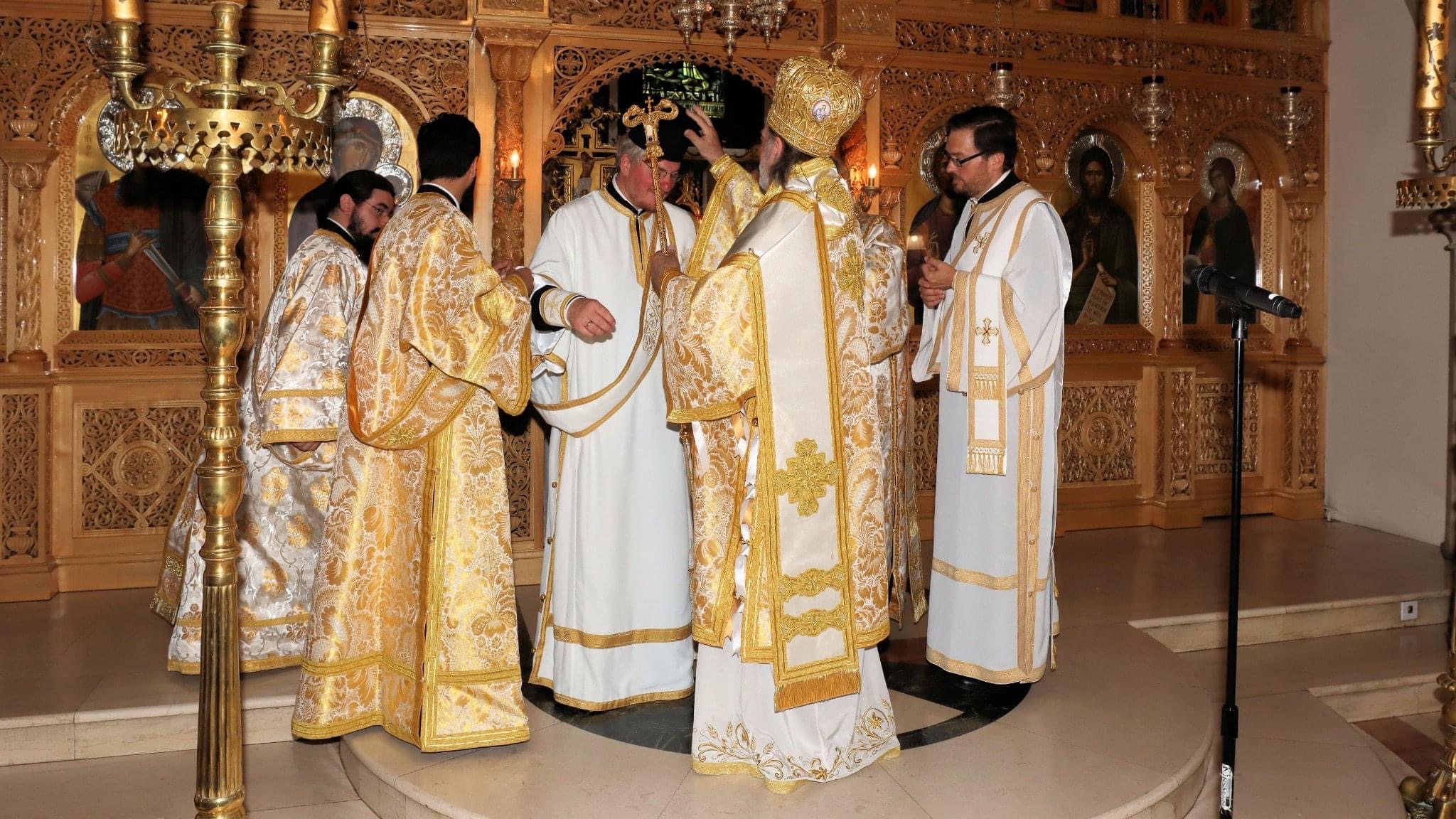 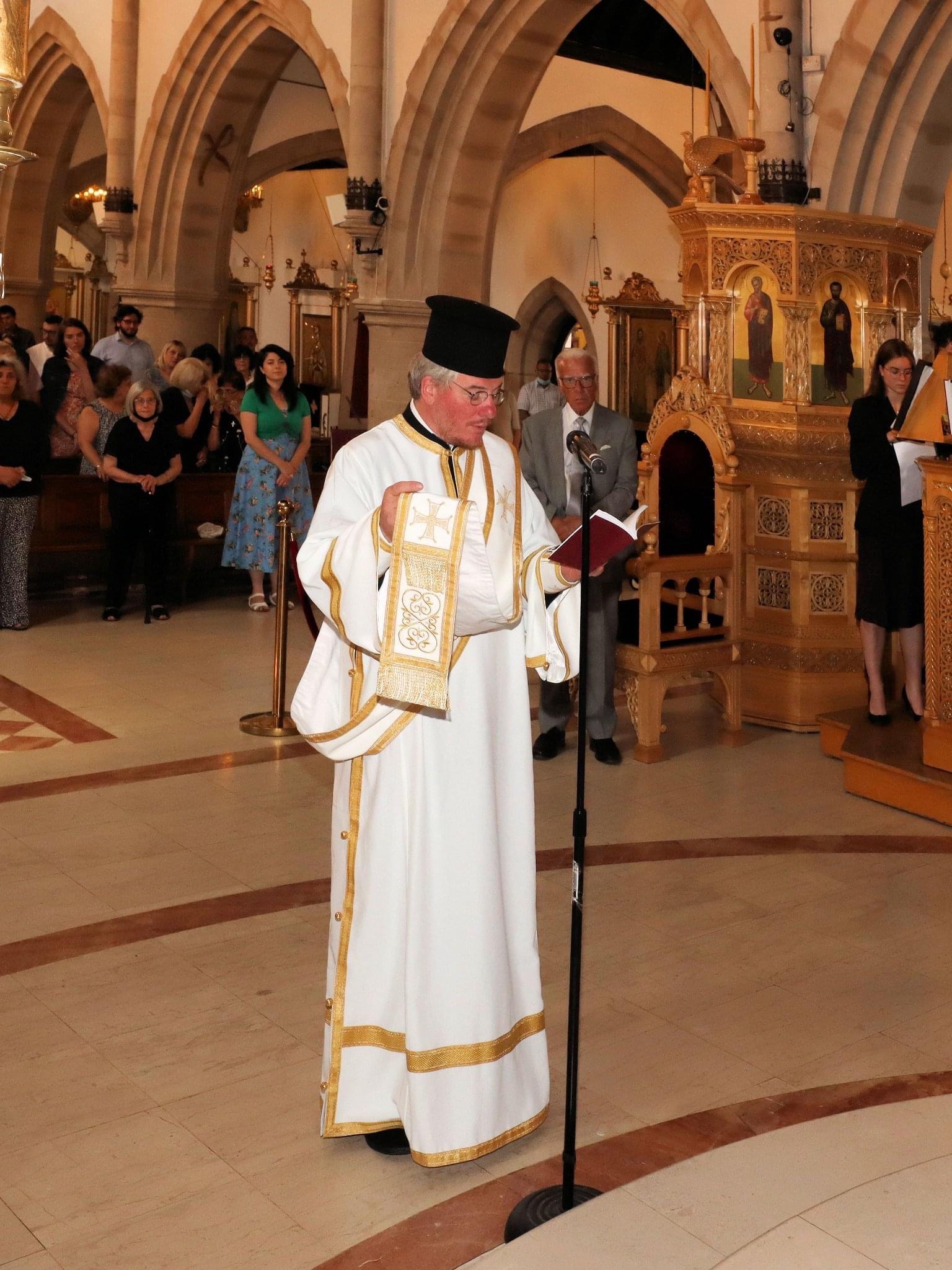 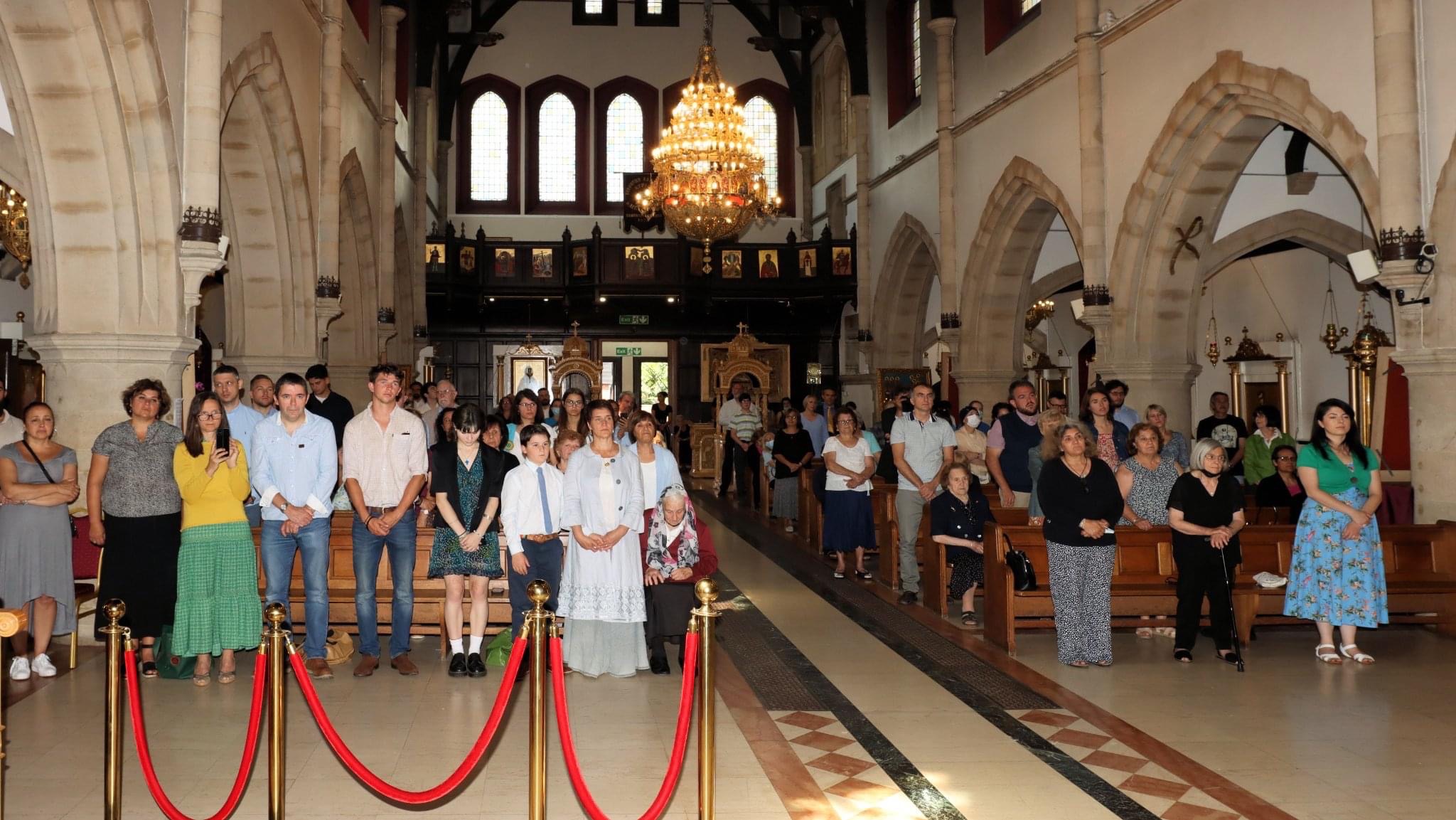 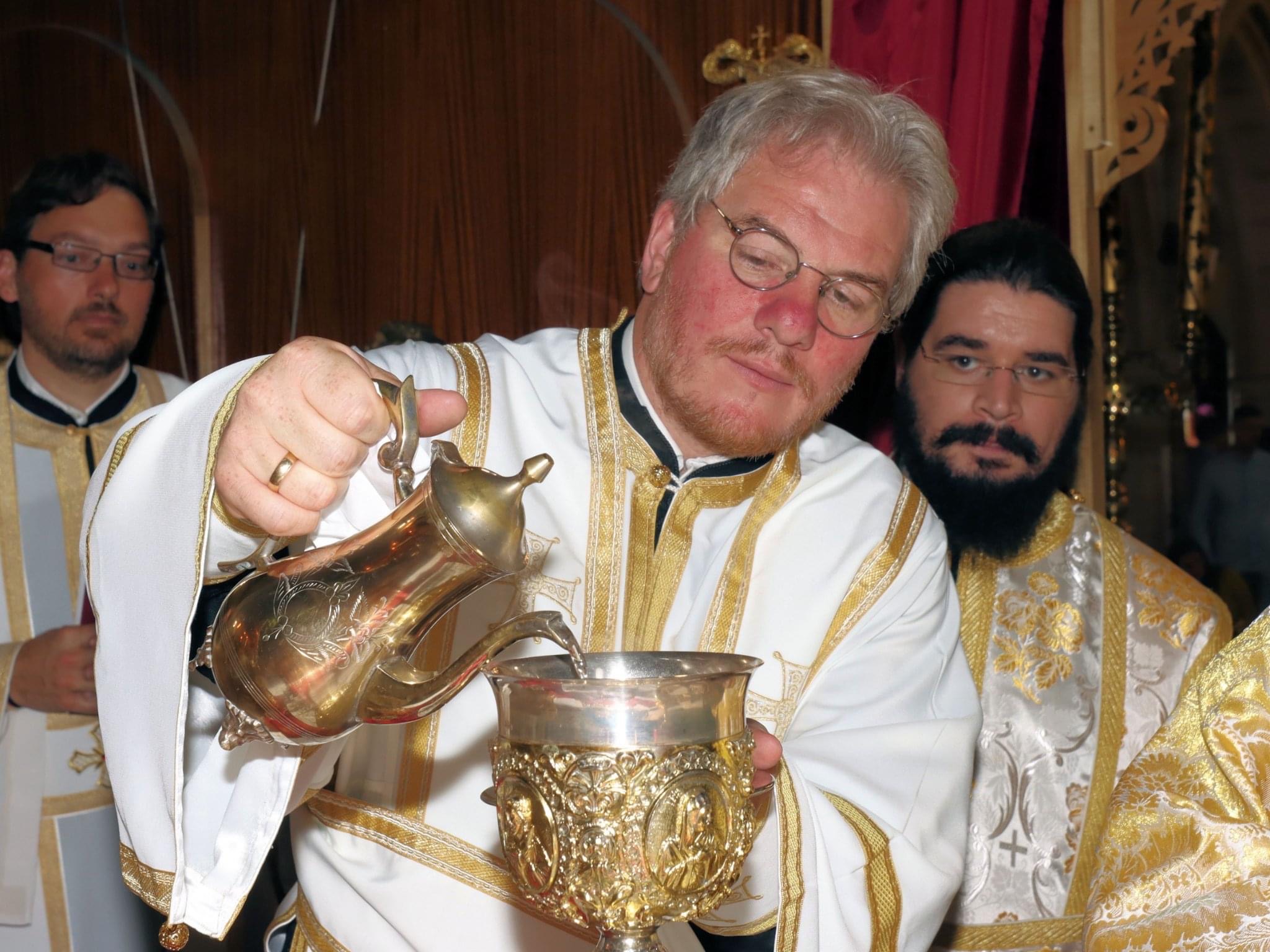 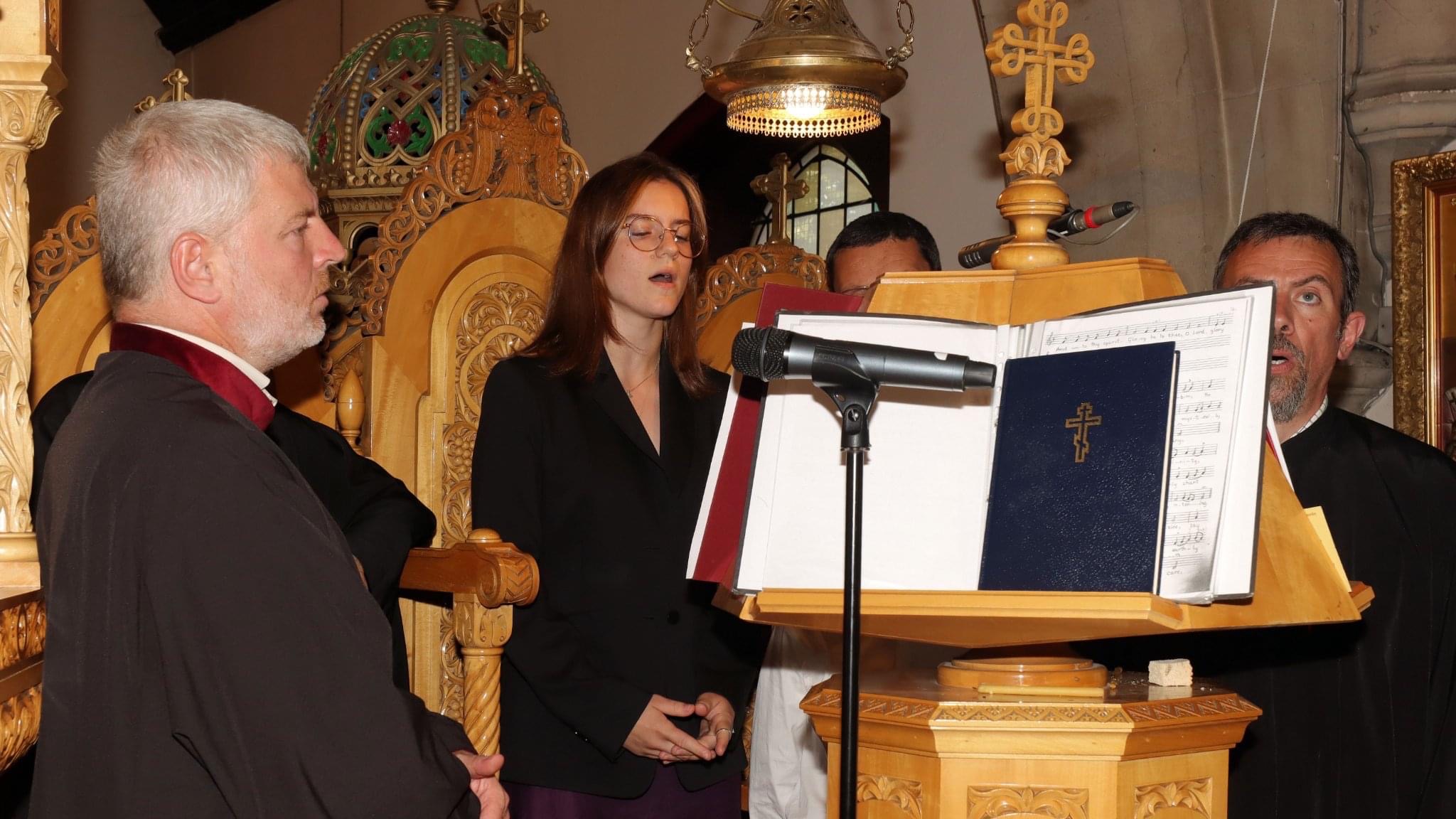 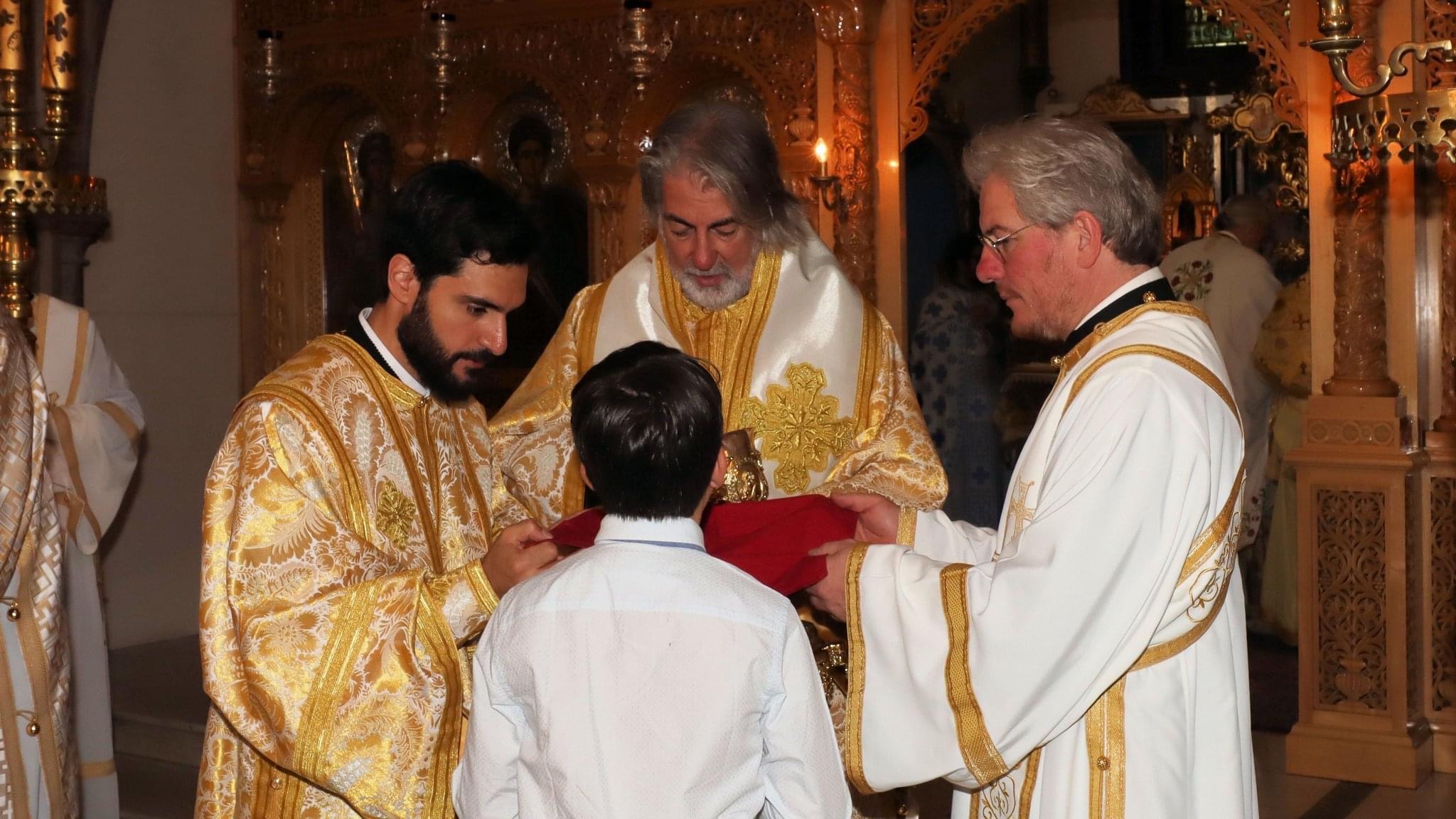 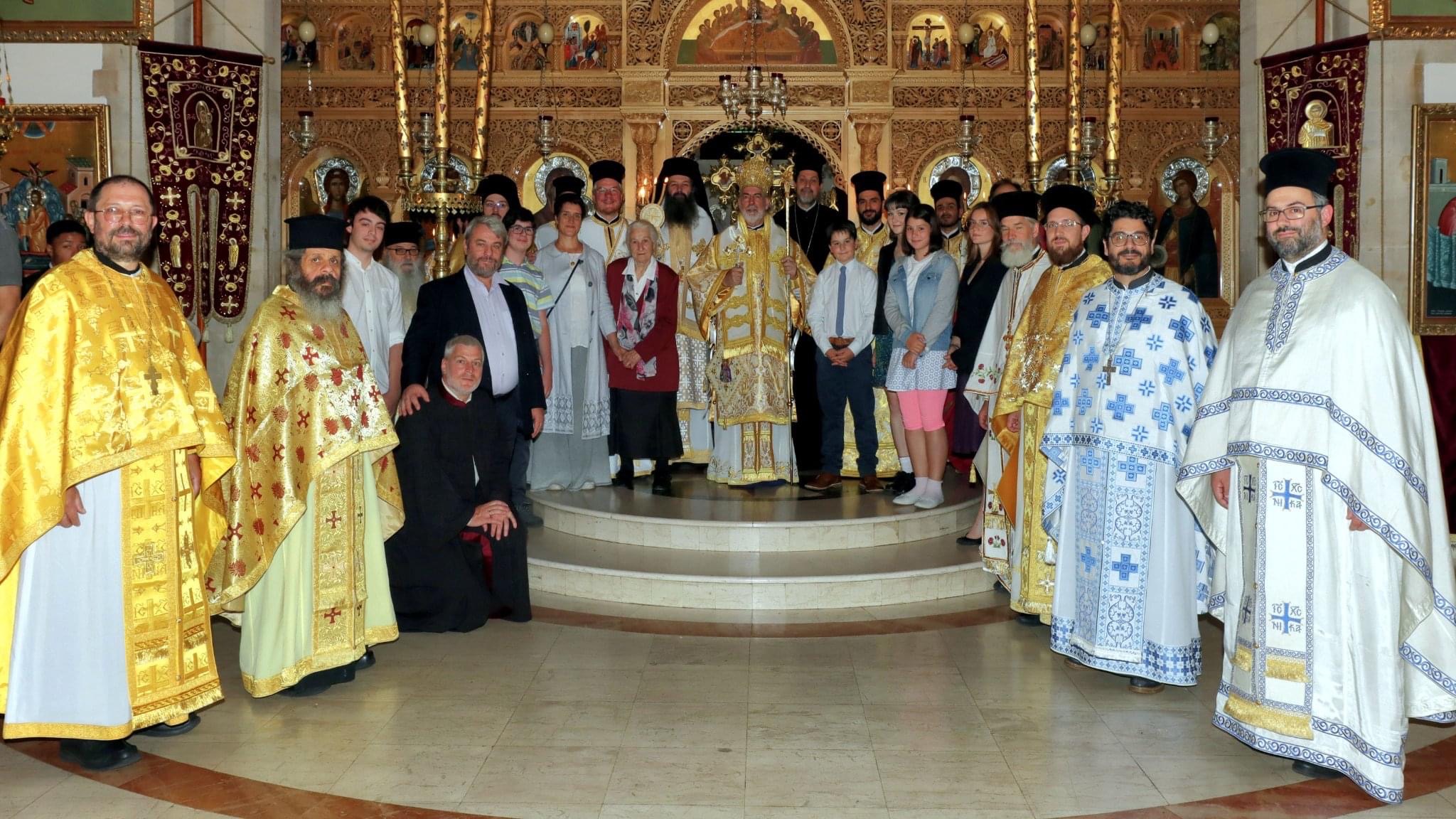 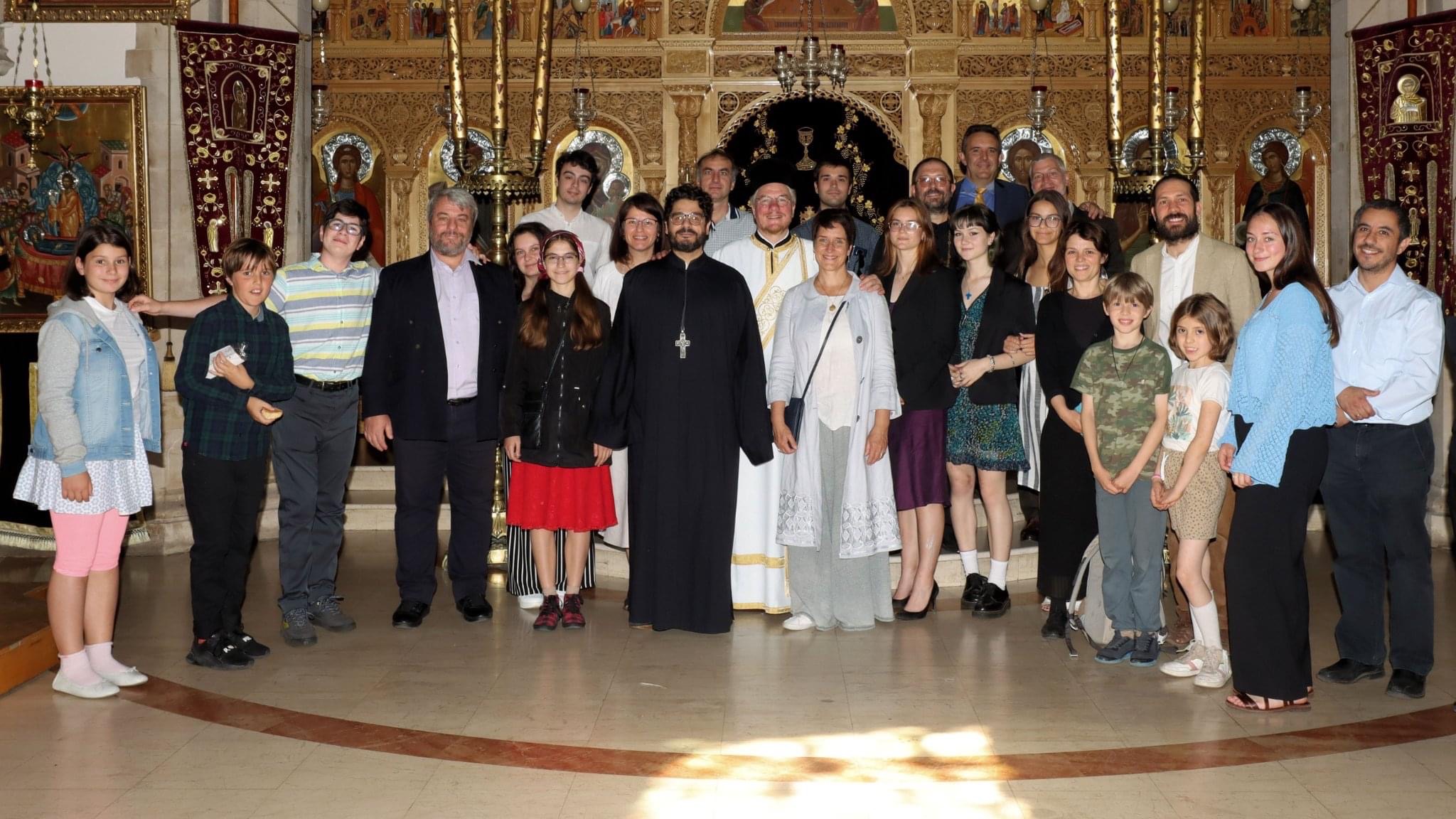 The Feast of the Transfiguration of the Lord in Woolwich

The Feast of the Transfiguration of the Lord in Coventry

Archbishop of Thyateira: As Church leaders, we are those in high places of responsibility for the caring of souls

Be very careful how you speak