Metropolitan of Sweden: Chrismation brings the communion of the Holy Spirit

“Two young persons standing before us today have received the truth and enlightenment” stressed Metropolitan Cleopas of Sweden in his speech on the Two Young Swedish Converts’ Chrismation which took place in St. George Cathedral of Stockholm, on Sunday, July 17, 2022.

Metropolitan Cleopas welcomed the two newest members of the Orthodox Church of the missionary Metropolis of Sweden and wished that they may multiply the talents that they received through the Sacrament of Chrismation and show themselves to be righteous vessels who will pass along the light of Christ and Orthodoxy “unto the measure of the stature of the fulness of Christ”.

Read below the speech of Metropolitan Cleopas of Sweden

Beloved Brothers and Sisters in Christ,

At the conclusion of today’s Divine Liturgy, we shall be called to bear witness and join the sacred author of the Holy Psalter of the Church in crying out: “we have seen the true light, we have received the heavenly Spirit, we have found the true faith, worshipping the indivisible Trinity, which has saved us”.

And, most assuredly, it could be no other way, for just a short while ago we saw the Only Begotten Son and Logos of God present among us and interacting with us out of extreme condescension, we heard Him preach to us about the truths of the Kingdom of Heaven, and afterwards, offer Himself as “a ransom for many”, granting to all those who partake of Him through the Sacrament of Holy Communion “forgiveness of sins and eternal life”.

This truth – or rather, this reality experienced by the Church – was passed down to us by the Holy Fathers of the 4th Ecumenical Council, whom we commemorate today, and who formulated Church doctrine regarding the person of our Lord and left it as a sacred legacy to the Body of Christ – the Church – so that we might know the manner in which the pre-eternal Logos took on human flesh and shared in our common passions, although He Himself was sinless by nature.

In today’s Gospel reading, we heard the Lord call His disciples, and by extension, all those of us who have been baptized in His name, “the light of the world”. In other words, He Himself grants to each one of us one of His traits, as we confess in the Nicene Creed. There, we acknowledge that Christ is “light of light”. And so, our Lord calls us “children of light”, while according to St. Paul the Apostle we are “children of the Church who are illuminated”.

These references speak about the light that illuminates every person who enters into this world. This is not the visible light, but the light of the soul. It is the light that leads to the recognition of truth. For Christians, truth is not an idea or a philosophical theory, but a person. It is Christ Himself.

Two young persons standing before us today have received the truth and enlightenment. They are two native Swedes, who belonged to another Christian denomination, however, each of them heard a calling – an invitation extended to them by the Lord. After transforming their soul into fertile land, the word of God blossomed, bore fruit, and today, they will receive the seal of the Holy Spirit through the holy Sacrament of Chrismation, so that they may become illuminated bearers of the Holy Spirit, and preachers of the true faith.

Baptism carries with it the power of the cross and Christ’s death, while Chrismation brings the communion of the Holy Spirit.

These two young persons share something in common, aside from their good intentions to learn about the Orthodox Christian faith and life.

The mother of one of them – Clint – speaks Greek, even though she belongs to the Lutheran Church of Sweden.

The other, William, speaks Greek as well. His decision sprung from deep within his heart, and came along with his decision to study Orthodox Christian theology.

Clint has the inclination and calling to “join the priesthood”, become a preacher of truth, and serve God and man, after first gaining the corresponding academic training, while leading an Orthodox Christian life.

And so, these two inspirational young people accepted the good alteration brought about by the Holy Spirit. Regarding them, we can readily say: “This is the change of the right hand of the Most High!” We often hear people refer to the concept of change in a satirical manner, suggesting that sometimes, due to certain actions or missteps by responsible members of the Church, an alteration in character is attempted or brought about, that ultimately leads to degradation, or some action is taken that transforms or changes someone for the worse.

This, however, is a corruption of the good alteration which takes place in the Church, since the Church itself is the Body of Christ, which has “neither blemish nor stain nor anything of the sort”, but rather, is “holy and immaculate,” as is its head, its founder Jesus Christ. And we must certainly never forget that everything that takes place here in the Church is not the achievement of one person or even many, but the result of the God’s bountiful mercy.

It is God Himself Who gave to the Church “first Apostles, then Prophets, and then teachers” (1 Cor. 12:27), and continues to grant various gifts to each of us until the end of the ages.

Therefore, I welcome the two newest members of the Orthodox Church of the missionary Metropolis of Sweden on behalf of all of you, with the wish that they may multiply the talents that they received today through the Sacrament of Chrismation and show themselves to be righteous vessels who will pass along the light of Christ and Orthodoxy “unto the measure of the stature of the fulness of Christ”, as the Holy Fathers whom we honor today also did. Amen! 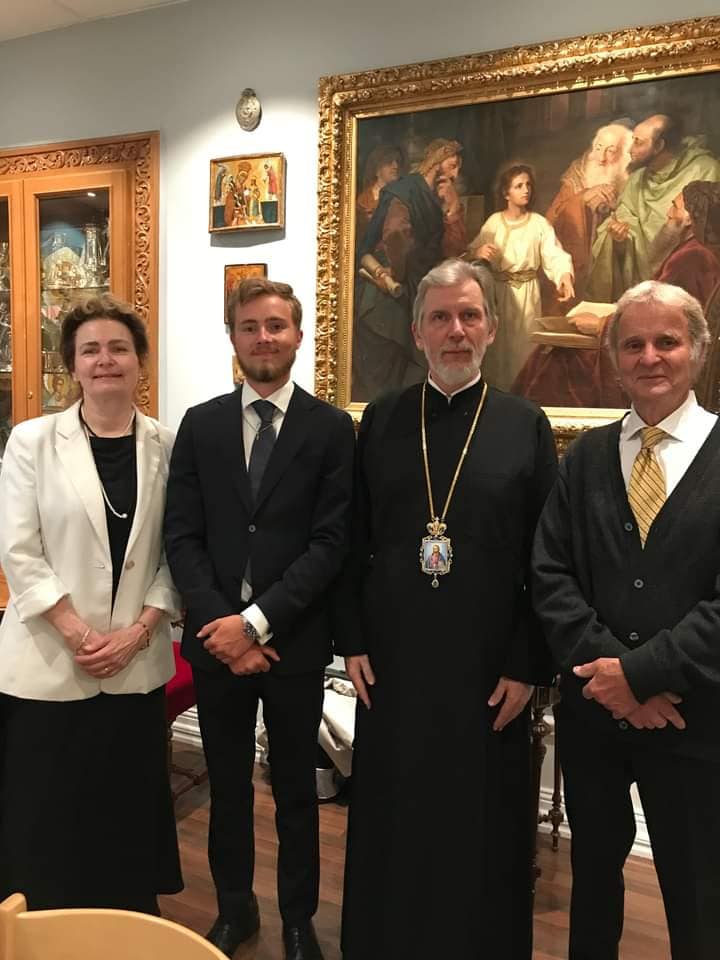 Metropolitan of Sweden: Our Savior Jesus Christ Himself, Who went up on the Cross, calls us to a life and freedom and love

A timeline of the Veneration of the Relic of St. Nectarios’ Right Hand in Scandinavia

Congratulations of the Metropolitan of Sweden to the “silver” Laocratis Kesidis

New publication by Apostoliki Diakonia on the Patriarchal visit to Stockholm