Metropolitan Kallistos Ware, Metropolitan of Diokleia and hierarch of the Ecumenical Throne, has fallen asleep in the Lord today, August 24th (1934-2022) as reported by the Archdiocese of Thyateira and Great Britain.

The Holy Archdiocese of Thyateira and Great Britain, “sadly announces the falling asleep of His Excellency Metropolitan Kallistos of Diokleia on Wednesday 24th August 2022.

A noted scholar, lecturer and author, and devout and faithful clergyman, a beloved spiritual father, His Excellency served Christ and His Church for many years. His words, spoken and written, made Orthodoxy known to the entire world, especially to his native land.

The clergy are asked to offer the appropriate memorial services and the faithful are asked to pray that God will receive his soul in His Kingdom and number him among the just.

When funeral arrangements are finalised, they will be made known to the public.

May his memory be eternal.”

It should be reminded that on August 14 there were reports that Bishop of Diokleia, Kallistos Ware, has reposed in the Lord. Later it was clarified that he is in critical condition.

The Metropolitan of Belgium via a post on his social media accounts said about the late hierarch: “We thank God for who he was and what he meant to the Orthodox Church worldwide and to humanity.

I myself was blessed to meet him from childhood, when my father regularly invited him to give lectures in Ghent (Belgium). I was also blessed to succeed him in the international dialogue between the Orthodox and Anglican Churches.

May his memory be eternal!”. 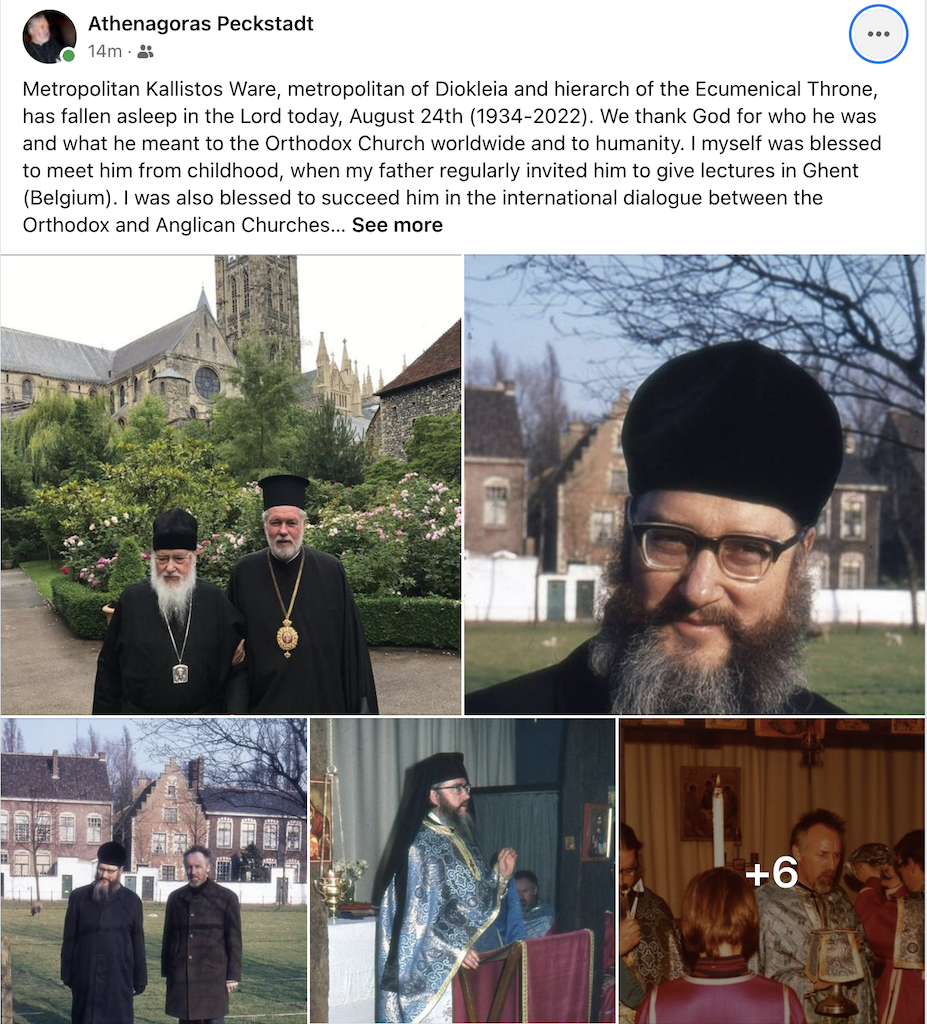 Kallistos Ware was an English bishop and theologian of the Eastern Orthodox Church. From 1982, he held the titular bishopric of Diokleia in Phrygia, later made a titular metropolitan bishopric in 2007, under the Ecumenical Patriarchate of Constantinople.

Born Timothy Richard Ware in 1934 to an Anglican family in Bath, Somerset, England, he was educated at Westminster School in London (to which he had won a King’s Scholarship) and Magdalen College, Oxford, where he took a double first in classics as well as reading theology.

Thoroughly conversant in modern Greek, Ware became an Orthodox monk at the Monastery of Saint John the Theologian in Patmos, Greece. He also frequented other major centres of Orthodoxy such as Jerusalem and Mount Athos. In 1966 he was ordained to the priesthood within the Ecumenical Patriarchate and was tonsured as a monk, receiving the name “Kállistos”

In 1966, Ware became Spalding Lecturer at the University of Oxford in Eastern Orthodox studies, a position he held for 35 years until his retirement. In 1970, he was appointed to a fellowship at Pembroke College, Oxford.

In 1982 he was consecrated to the episcopate as an auxiliary bishop with the title Bishop of Diokleia (in Phrygia) in the Archdiocese of Thyateira and Great Britain of the Ecumenical Patriarchate. Following his consecration, Ware continued to teach at the University of Oxford and served in the Greek Orthodox parish in Oxford.

On 30 March 2007, the Holy Synod of the Ecumenical Patriarchate elevated the Diocese of Diokleia in Phrygia to a titular metropolitan diocese and Ware to the rank of metropolitan.

In 2017, Ware was awarded the Lambeth Cross for Ecumenism by the Archbishop of Canterbury “for his outstanding contribution to Anglican-Orthodox theological dialogue”.

Ware is a prolific author and lecturer. He has authored or edited over a dozen books, numerous articles in a wide range of periodicals, essays in books on many subjects, as well as providing prefaces, forwards or introductions to many other books. He is perhaps best known as the author of the book The Orthodox Church, published when he was a layman in 1963 and subsequently revised several times.

In 1979 he produced a companion volume, The Orthodox Way. He has collaborated in the translation and publication of major Orthodox ascetic and liturgical texts. Together with G. E. H. Palmer and Philip Sherrard, he translated the Philokalia (four volumes of five published as of 2018); and with Mother Mary he produced the Lenten Triodion and Festal Menaion.

Northcote: The Apodosis of the Dormition of the Theotokos in the town of Bendigo