Ecumenical Patriarch Bartholomew and Metropolitan Epiphaniy of Kyiv honorary citizens of the Municipality of Nestos, Kavala

Ecumenical Patriarch Bartholomew referred to the common values and memories that he shares with the majority of residents of the Municipality of Nestos, who come from the unforgettable homelands, during the official ceremony of declaring him an honorary citizen of the Municipality of Nestos, together with Metropolitan Epiphaniy of Kyiv and all Ukraine.

Ecumenical Patriarch Bartholomew and his entourage arrived on Monday morning at the seat of the Municipality of Nestos, Chrysoupolis, being their first stop of their visit to the Regional Council of Kavala, after the completion of their two-day visit to the island of Thassos.

The Ecumenical Patriarch in his speech underlined – among other things – that the common values he shares with the inhabitants who come from the unforgettable homelands are “the culture and spiritual legacy of our fathers”. “It is these values that saved our identity,” he said characteristically.

On the occasion of the presentation of the particularly elegant photo album, entitled “Theological School of Halki – 50 years of silence, anticipation and hope”, published by the Municipality of Nestos under the care and supervision of Mr. Themis Fasoulas, the Ecumenical Patriarch made a special reference to the “pained school” (Halki), as he described it, which constitutes a “a piece of our heart and its doors closed for fifty years causes a great trauma”.

The Ecumenical Patriarch announced that very soon the building reconstruction of the school will begin from the ground up with the assistance of businessman and Archon of the Ecumenical Patriarchate, Mr. Thanasis Martinou. He also thanked the current abbot of the Holy Monastery of the Holy Trinity at the Theological School of Halki, Bishop Kassianos of Aravissos, for his “moving and special care” for the school.

Before the start of the event, the Mayor of Nestos, Mr. Savvas Michaelidis, guided the hierarchs through the town hall and presented them with a detailed explanation of the frescoes and the painted decoration created by the painter Mr. Dimitris Nalbantis.

At the event, Archbishop Ieronymos of Athens and all Greece, was represented by Metropolitan Damaskinos of Didymoteicho, Orestiada and Soufli.

The moving speech of Metropolitan Epiphaniy of Kyiv

With moving words and always speaking in Greek, Metropolitan Epiphaniy of Kyiv and all Ukraine, heartily thanked the Mayor of Nestos, Mr. Savvas Michailidis, and the municipal council for the special honour of declaring him an honorary citizen together with the Ecumenical Patriarch.

Metropolitan Epiphaniy emphasised – among other things – that we always need the support and help of friends and added that hospitality is love to and for strangers “and we today, but also all these days of our stay in Greece, we felt this love”.

The Primate of the Ukrainian Church also thanked for the expression of love towards him, towards the suffering people of Ukraine and their Church. 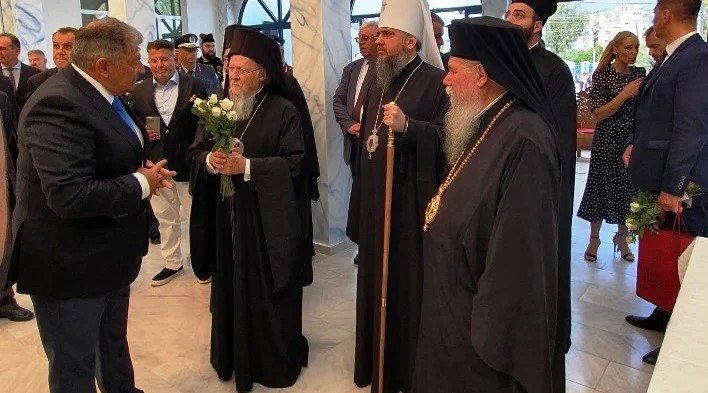 Ecumenical Patriarch in Kavala, Greece – Doxology at the Church of St. Paul the Apostle