Double spiritual joy for the Greek Orthodox Church of Australia

On the great feastday of the Entrance of the Theotokos to the Temple, the episcopal ordination of the Archiepiscopal Vicar of Canberra, Bishop-elect Prochoros of Charioupolis took place with ecclesiastical splendour at the Holy Parish of St Nicholas, in Marrickville, Sydney.

The new Bishop was counted worthy to receive the grace of the episcopy from the hands of His Eminence Archbishop Makarios of Australia and was renamed Bartholomew, in honour of His All-Holiness Ecumenical Patriarch Bartholomew and for the completion of thirty glorious and fruitful years as Patriarch.

Prior to his ordination, and standing before his Archbishop, the Bishop-elect declared his devotion to the venerable centre of Orthodoxy and to His All-Holiness Ecumenical Patriarch Bartholomew.

He also expressed his gratitude to the Synodal Hierarchs for his promotion, while mentioning and thanking the people who greatly helped him in the course of his life.

He mentioned by name, among others, His Eminence Metropolitan Seraphim of Sevasteia, from whom he received the first two degrees of priesthood, his fellow bishops and all those who are in the Holy Archdiocese of Australia, the Very Reverend Archimandrite Nektarios Zorbalas, who baptized him, his teachers at St Andrew’s Greek Orthodox Theological College, the late Fathers Panagiotis Baskoutas, George Koukoulas, Konstantinos Mavridis and Michael Apostolopoulos, his grandfather, the late Fr Philip Moraitis, and his uncle, Iakovos, from the Holy Monastery of Dionysiou on Mount Athos.

In addition, he made special mention of Archbishop Stylianos of Australia, of blessed memory, from whose hands he received the rank of Archimandrite and, as he pointed out, he learned a lot from his great experience and wisdom.

The Bishop of Charioupolis was particularly moved at the mention of his late parents, Vasilis and Lygeris. “I thank them from the bottom of my heart for their labours. They raised me with love, faith, humility, meekness and the fear of God. They sealed my life with their instructive guidance,” the emotionally charged bishop noted, praying that God grant them rest in the land of the living and where the righteous rest.

Concluding his address, and having mentioned and thanked for their cooperation the people from the parishes of Saints Raphael, Nicholas and Irene in Liverpool, and The Resurrection of our Lord, Kogarah, as well as the holy Clergy and Christ-loving people of Canberra and Tasmania, the soon to be ordained Bishop addressed with deep filial love His Eminence Archbishop Makarios, thanking him for the paternal affection with which he has embraced him from the moment they met.

“I am grateful to God that you exist in my life, and in the life of our local Church,” he stressed and promised to honour the episcopal office and make every effort to be found worthy of the expectations of the Church.

With the conviction that the new Bishop has what is required to truly live up to the expectations of the Church, the Archbishop of Australia addressed paternal advice and guidance for his further progress, beginning with today’s feastday and noting the theological and spiritual symbolism of the entry of Mariam, the God-child, in the Temple.

“The complete dedication of Panagia to God reminds us that no one belongs to himself,” he pointed out among other things and emphasized that, “we belong to Christ, in both body and soul.”

Referring to the highest honour that the Bishop of Charioupolis was receiving, that is, to hereafter be named Bartholomew, His Eminence pointed out that this honour constitutes, at the same time, the greatest responsibility, as he should aim to be as similar as possible to the person who held Orthodoxy on his shoulders for thirty whole years.

Speaking from the heart about the Patriarch of our people, the Archbishop spoke of the greatest spiritual person of contemporary society, “on the one hand, because in his person, a high and spiritual institution is embodied and, on the other hand, because as a person, he has a vigour for life, grace, and a wealth of divine and strong prayer.”

“Our Patriarch is an exceptional hierarchical figure of the Church, an enlightened minister of the Sacraments of God and a proponent of high values,” he stressed elsewhere and added, “A whole world of spiritual values, virtues and gifts are distilled in his person. It reflects a type of beauty and excellence, rendering a picture of completeness.”

Thenceforth, His Eminence conveyed to the new Bishop an excerpt from the speech of the late Metropolitan Elder Meliton of Chalcedon, from the time when he ordained the Ecumenical Patriarch, who was then Deacon Bartholomew to the priesthood.

“You are coming to receive grace. This is the most important. This is the deciding factor to the end. But for this to happen, you must empty yourself in order to make space for the grace”, were the paternal words of advice of the late Hierarch Meliton, which Archbishop Makarios repeated before the soon to be ordained Bishop, urging him not to be content with his gifts and not to rely on his own strength, but to make space for the grace of God, so that it becomes active in your life.

Finally, His Eminence stated with confidence that His Grace Bishop Bartholomew will have a beautiful, modest, humble, and blessed hierarchical ministry since he is distinguished for his hard work and organisational capabilities, for his ecclesiastical mindset and ethos, for his education and philanthropic sensitivity, as well as for his devotion to the Ecumenical Patriarchate and for his unifying vision for the Holy Archdiocese of Australia.

In closing, he mentioned the parents of His Grace, noting that after not being able to bear children for 16 whole years, “Panagia sent you to them as an answer to their many and fervent prayers. I dare to testify, today, before this full Church, that you are a child of our Panagia,” he pointed out, “and, therefore, it is no coincidence that you are being ordained on the day we commemorate her Entry to the Temple.”

It is noted that during the ordination service of the Bishop of Charioupolis, also present with the Archbishop of Australia were His Eminence Metropolitan Ezekiel of Dervis, their Graces Bishop Iakovos of Miletoupolis, Emilianos of Meloa, Elpidios of Kyaneon, Silouan of Sinope, Kyriakos of Sozopolis, Chistodoulos of Magnesia, and Evmenios of Kerasounta.

Among the congregation, which together with the Clergy loudly shouted, “Worthy” to the new Bishop were, among others, the High Commissioner for the Republic of Cyprus, Her Excellency Martha Mavromatis, the Consul General of Greece in Sydney, Mr Christos Karras, the NSW Senators, The Hon. Peter Poulos and Courtney Houssos, the President of the Inter-communities Council of Victoria, Mr Tony Tsourdalakis and the President of the Greek Community of Canberra, Mr John Loukadellis.

The service was also honoured by the presence of the Right Reverend Bishop Malcolm Richards of the Anglican Church and Bishop Robert Rabbat of the Melkite Church. 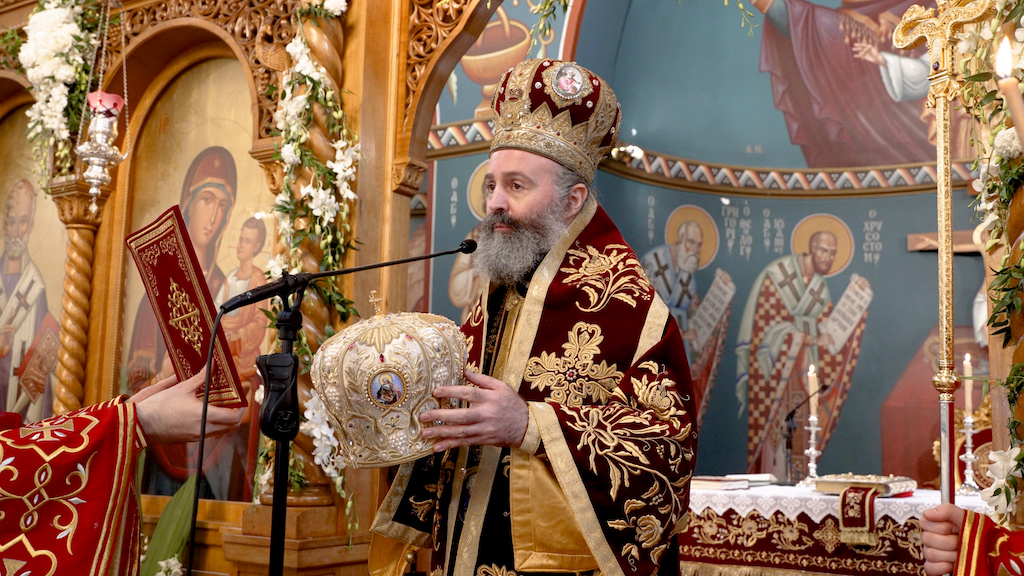 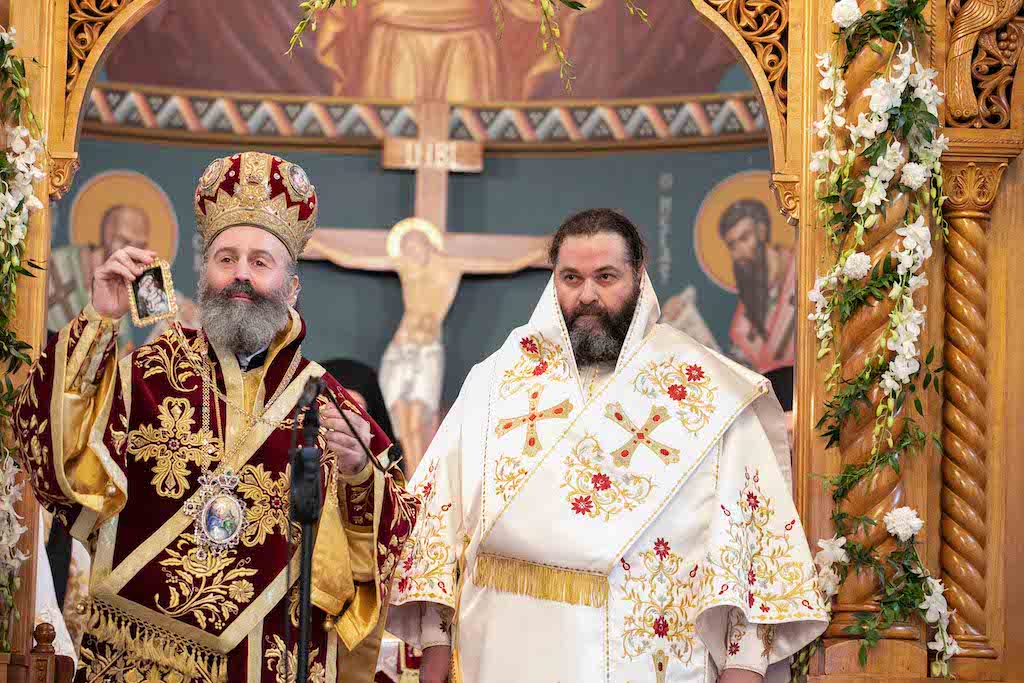 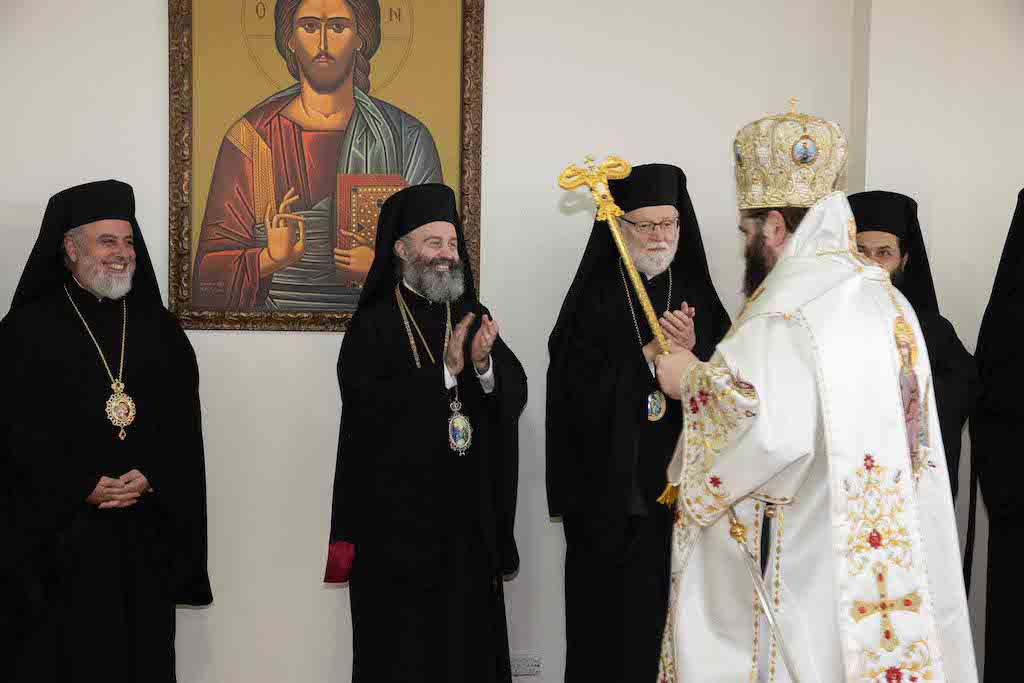 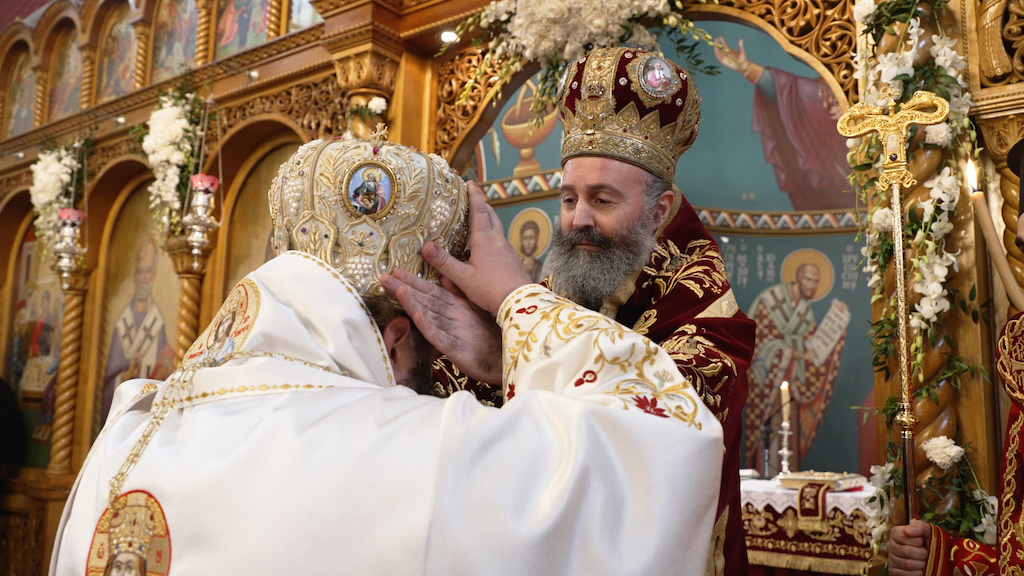 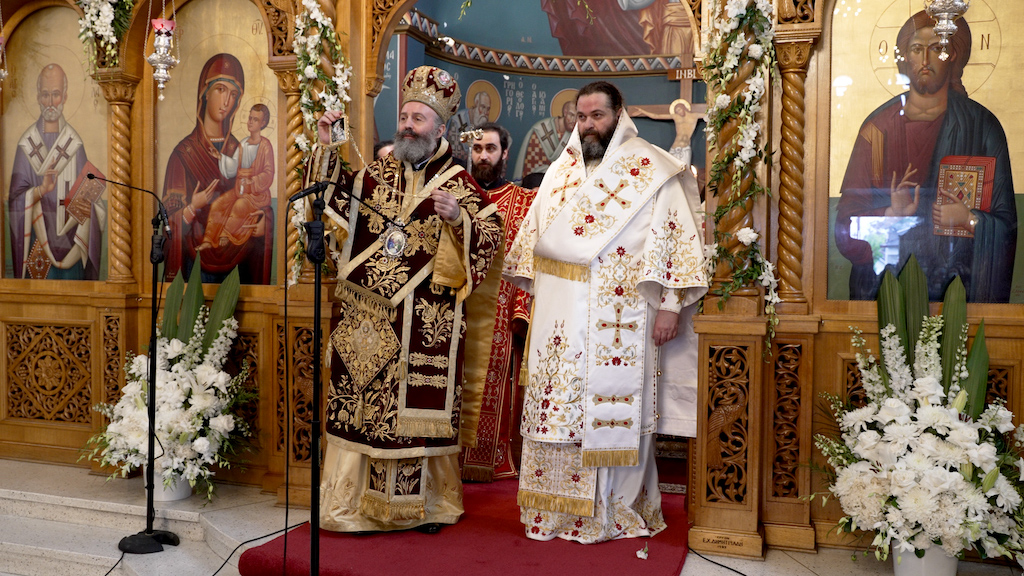 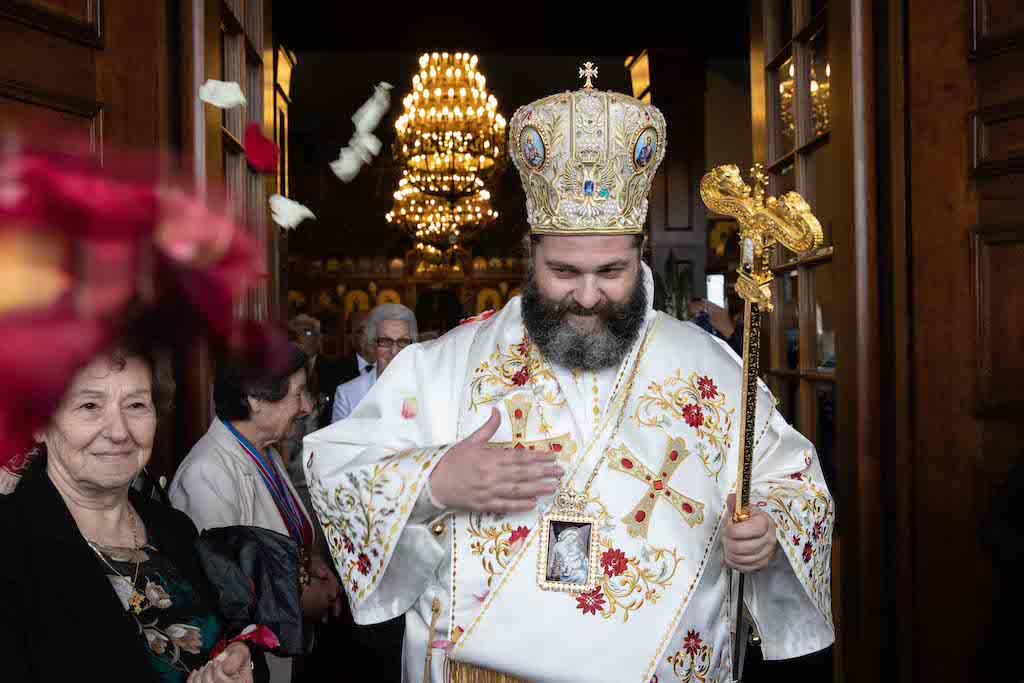 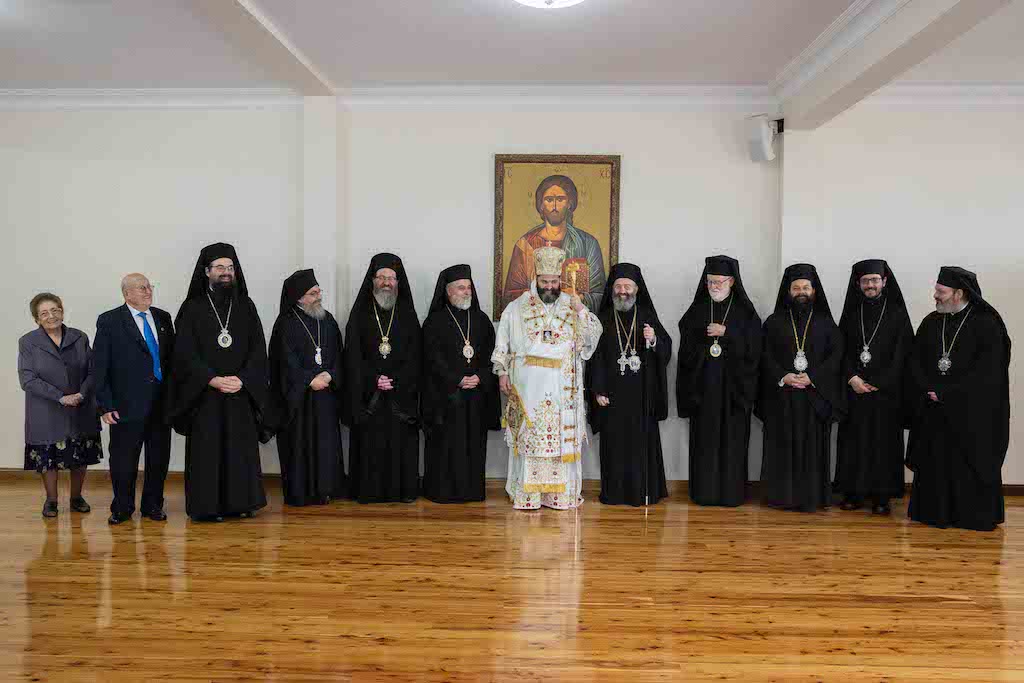 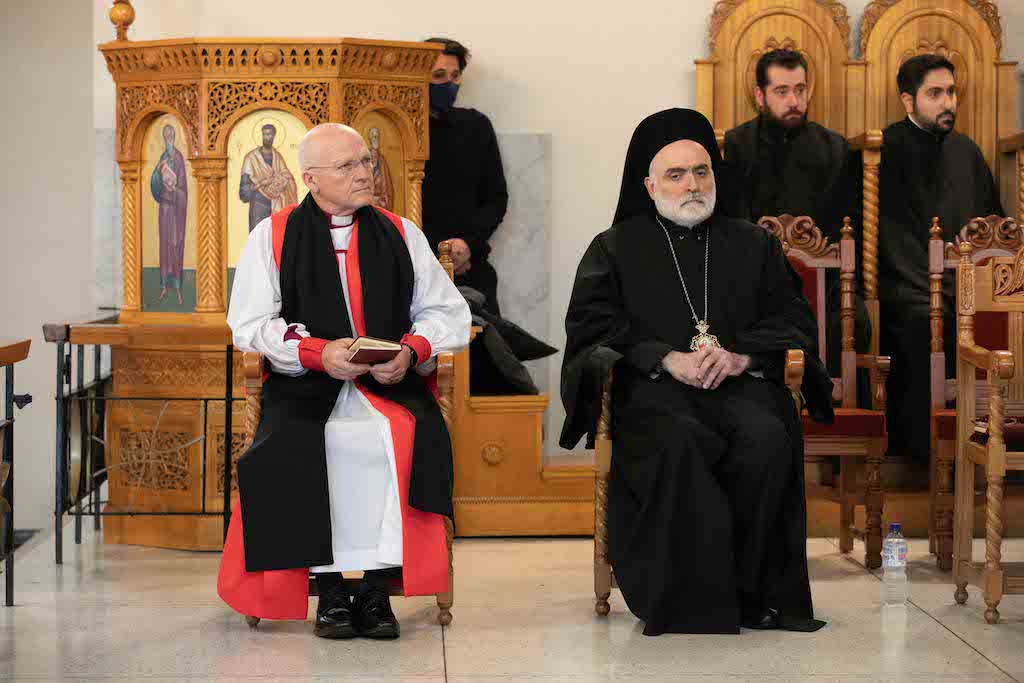 Visit of the General Consuls of Greece, Croatia, and Malta at the Archdiocese of Australia

"Your All-Holiness, we welcome you as Patriarch of the Orthodox Nation" (PHOTO)