The blessing and presence of the Ecumenical Patriarch is a spiritual milestone for the Shrine leading to the complete opening of the re-built Church in April of 2022.

Remarks of His All Holiness Ecumenical Patriarch Bartholomew

Your Eminence Archbishop Elpidophoros of America,
Most Reverend Metropolitans and Bishops,
Esteemed Members of the Friends of Saint Nicholas,
Honorable Archons of the Ecumenical Throne,
Beloved Children in the Lord,

We stand here today, on this Hallowed Ground at the World Trade Center, where the world changed in a cruel and terrible moment twenty years ago.

We stand here, before the Church and National Shrine of Saint Nicholas, the Wonder-worker Archbishop of Myra in Lycia, whose historical See in Asia Minor is an integral part of the Holy Mother and Great Church of Christ: our Ecumenical Patriarchate of Constantinople.

We stand here today, before a holy temple resurrected by faith and devotion, and extraordinary toil and labor.

We stand here today, as we celebrate the Thirtieth Anniversary of our Enthronement as the Successor to the Holy Apostle Andrew, the First-Called Disciple of the Lord Jesus Christ.

And we stand here today, celebrating the Patronal Feast of our spiritual son, His Eminence Elpidophoros, to whom we have entrusted the hopes for this Eparchy of the Ecumenical Throne in this Great Nation, the Holy Archdiocese of America.

This Sacred Ground of the American experience is where the Orthodox Christian Faith will take the lead in manifesting to the world that good is mightier than evil, that there is life beyond death, and that love will always triumph over hatred.

We have come to this place to open Doors on Greek Orthodoxy to the American Consciousness of what the best in religion can be.

We have come to this place to open Doors on the Ecumenical Patriarchate, its history, tradition, and spiritual mission.

We have come to this place to open Doors on the story of the Immigrants who came to these shores in the shadow of Lady Liberty, searching for a new life and new opportunities.

We have come to this place to open Doors to promote inclusion, tolerance, and mutual understanding among all peoples of faith and good will.

We have come to this place to open Doors of Saint Nicholas the patron of all sojourners – from those who died on 9/11, to those who mourn their loss, to the pilgrims who will enter this National Shrine.

From the Lands of the Seven Ecumenical Councils, that established the Christian Faith throughout the Oikoumene,

From the Queen of Cities – Constantinople, which preserves the authentic Traditions of Scripture, Monasticism, and is the guardian of the Holy Mountain Athos,

From the Domain of Saint Nicholas the Worker of Miracles himself, we bring his physical and spiritual presence, in the Sacred Relic of his Holy Hand, which will find an eternal resting place within this National Shrine.

And we bring our paternal and Patriarchal Blessing to this Special Opening of the Doors, that inaugurates the countdown to the day when the Shrine will be fully open to all people, and for all people.

A short time ago, we blessed and raised Cross of Christ to be permanently affixed atop the dome.

This crowning of the Church by the Exaltation of the Holy Cross is our sign and symbol of victory, for Νικόλαος means: “Victory of the People, Νίκη του Λαού.” The cowardly attack that wrought so much death in this place does not have the final word.

He ascended the Cross on Golgotha to create a ladder to Heaven for all humanity. The brave souls who ascended the stairs of the Towers that day, created, by their love and by their sacrifice, numberless ladders to heaven. The Angels carried their precious souls to the heights, even as their bodies were lost among the ruination of that fateful day.

Today, the Cross of our Lord reminds each and every one of us that through death, He has conquered death. And the resurrection of the Saint Nicholas Church as this Shrine for the Nation is an affirmation of our Hope of the Resurrection and life Eternal through Jesus Christ, our Lord.

We bestow our sincere thanks and abundant blessings upon the Friends of Saint Nicholas, who have come together with our dear friends and spiritual sons, Archbishop Elpidophoros and Father Alexander Karloutsos, to make possible this resurrection of Saint Nicholas at Ground Zero.

We give thanks to all civil authorities, and especially former Governors Pataki and Cuomo, and our dear friends of the Port Authority of New York and New Jersey, who made the path clear for this rebuilding effort that we celebrate today.

And we give thanks to all of you – the faithful of the Parish, and those from around the country and the globe who have given of themselves in prayer and fasting, in gifts both great and small, to make this dream of Saint Nicholas a reality.

May His precious Relic, his miracle-working hand extend over you all and grant you health, prosperity, and every spiritual blessing.

And May this resurrected Saint Nicholas Greek Orthodox Church and National Shrine, eternally shine the light of Christ throughout this City of New York and around the world, as a beacon of Faith, of Hope, of Love – the salvific Gospel of our Lord Jesus Christ!

Your All-Holiness,
Your Eminences and Graces,
Dear Brothers and Sisters in Christ,

Today, on the thirtieth anniversary of the enthronement of His All-Holiness as the longest-serving Archbishop of Constantinople-New Rome and Ecumenical Patriarch in history, we receive the great grace and blessing of his paternal and Patriarchal love in this special opening of the doors of our National Shrine.

His All-Holiness, as the global Patron of Orthodoxy, brings to us the gift of Saint Nicholas himself, who is the Heavenly Patron of this Shrine. The venerable presence of the Ecumenical Patriarch bestows an added ecumenicity to the mission of the Shrine, as well as a dimension of interreligious and intercultural values that comprise the vision and love of His All-Holiness for all humankind.

In Constantinople, the Mother Church occupies a sacred τόπος, which is known as the Phanar – the “Lighthouse.” From that beacon of love, peace and reconciliation, His All-Holiness has come to Ground Zero today, in order to add his brilliance and the radiance of the Holy Great Church of Christ to the illumination of Saint Nicholas.

This day will long be remembered as the commencement of a mission that extends well beyond the confines of the parish of Saint Nicholas, the Archdiocese and, indeed, the American Nation. This is the beginning of a ministry and a mission to the entire oikoumene — signaling, of course, a new era for Orthodoxy in this hemisphere and around the world.

Naturally, though, a mission of this magnitude can only be launched and made possible by the Ecumenical Patriarch himself.

Therefore, with much eagerness of heart and soul, let us listen closely to his Apostolic message — the word of the 270th Successor to the See of the First-Called Apostle Andrew, His All-Holiness Ecumenical Patriarch Bartholomew.

After the completion of the opening of Saint Nicholas Shrine at Ground Zero by the Ecumenical Patriarch Bartholomew, Archbishop Elpidophoros of America highlighted the significance of this event, which “signals a historic renewal of our faith in the US and globally.”

The landmark opening today of St Nicholas Shrine at Ground Zero by Ecumenical Patriarch Bartholomew — on the 30th anniversary of his enthronement — signals a historic renewal of our faith in the US and globally. pic.twitter.com/sqZe4P04EE

Rebuilt as a National Shrine, it was designed by the world-renowned architect Santiago Calatrava and sits atop Liberty Park overlooking the Memorial Pools and the 9/11 Museum.

When complete, it will welcome people of all faiths and denominations to remembrance and contemplation, as the only symbol of faith at the World Trade Center.

The blessing, elevation, and permanent installation of the Cross that will sit atop the dome of the church, and a special service in which his the Ecumenical Patriarch opened the doors of the Shrine in order to present a special blessing, a relic of Saint Nicholas the Wonderworker himself, which has been brought from the Holy Mountain of Athos, took place on Tuesday morning, at 11:00 am.

Ecumenical Patriarch Bartholomew, Metropolitan Emmanuel of Chalcedon, Archbishop Elpidophoros of America, members of the Holy Eparchial Synod of America, the leadership of the Friends of Saint Nicholas, officials of the Port Authority of New York and New Jersey, and Federal, State, and Local Government Officials, were present. 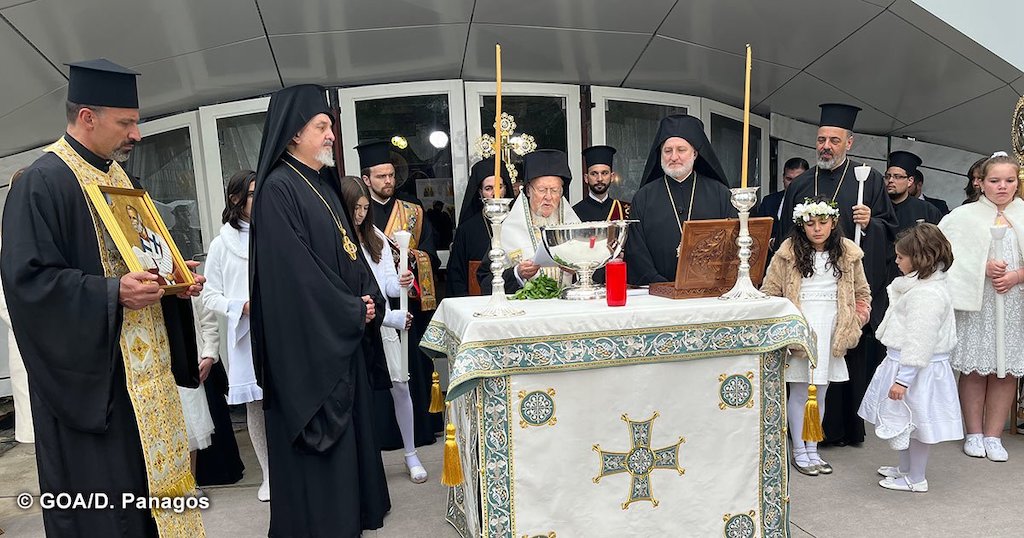 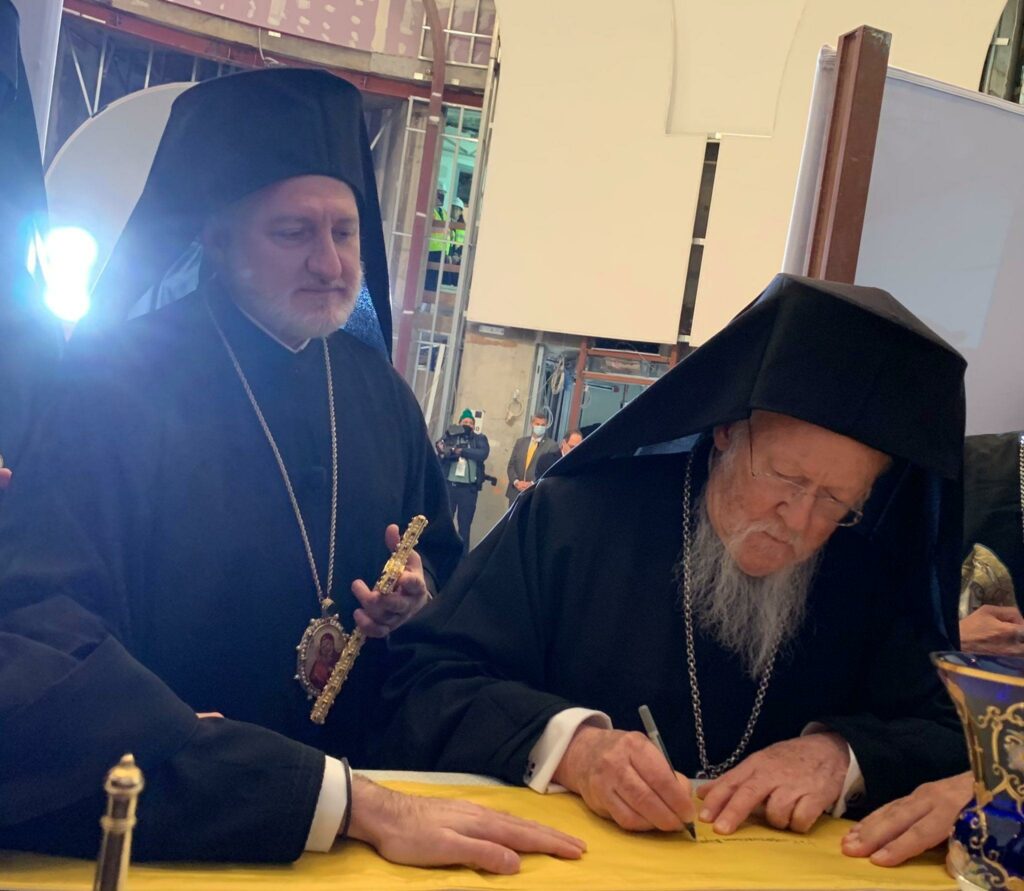 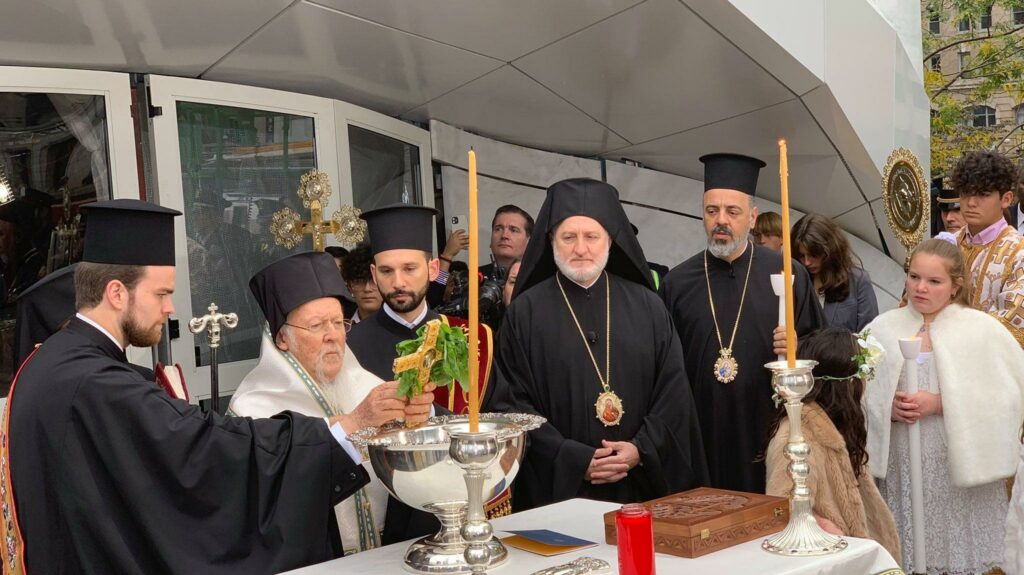 Archdiocese of America: The National Philoptochos stands ready to assist in any way to address the damage that occurred in Balukli

Elpidophoros on the fire in Greek Hospital in Constantinople: Today, our Church is shaken by a catastrophe

Thirty years since the enthronement of the Ecumenical Patriarch (VIDEO)