Archdiocese of Australia: Do not trust “clergy” who do not have a canonical priesthood 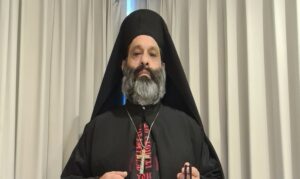 This gentleman had previously entered the Dioceses of the Church of Greece to join some of them, but, as expected, he failed to be recognized by any canonical Diocese of the Church.

Archbishop Makarios of Australia received Alexandratos in a special hearing. The Archbishop boldly and lovingly pointed out his mistakes and delusions and pointed out to him the proper way of joining the only universally recognized Orthodox Archdiocese of Australia, which is under the jurisdiction of the Ecumenical Patriarchate.

However, from information that reaches the Holy Archdiocese, Alexandratos continues to pretend to be a clergyman, without showing signs of repentance.

“We call on the Orthodox people of Australia to be vigilant and not to trust “clergy” who do not have a canonical priesthood or do not belong to the Archdiocese of Australia.

All rituals and sacraments performed by illegal clergy are invalid and are not recognized by any Orthodox Patriarchate or Autocephalous Church worldwide”.

Service of the Bridegroom at the historic church of St. Nicholas in Hypsomatheia