1,485 years since the consecration of Hagia Sophia

Yesterday, 27 December 2022, 1485 years ago, in 537 AD, the grand Hagia Sophia Cathedral in Constantinople was solemnly consecrated.

According to Emperor Justinian I’s design, the church was to become the jewel of the capital city of the Byzantine Empire and serve as an expression of the empire’s greatness.

Up to 10,000 people worked on its construction daily.

“Solomon, I have outdone thee!” St. Justinian declared, according to tradition, upon entering the newly-built cathedral, referencing the great ancient temple built by King Solomon in Israel.

Hagia Sophia remained the largest church in Christendom for more than 1,000 years, until the construction of St. Peter’s in Rome. On May 29, 1453, the great church was captured by Turks and later converted into a mosque. In 1935, the church was turned into a museum, according to the decree of Ataturk.

A legend has survived about the fate of the holy altar of Hagia Sophia, as reported by Mystagogy:

According to legend, after the fall of Constantinople to the Ottomans in 1453, three Venetian ships fled the city filled with various relics to avoid their capture by the Turks, but the third which carried the Holy Altar of Hagia Sophia sank into the waters of the Bosphorus in the Marmara region. Since then, in the exact area of the sinking, the sea is always calm and serene, no matter what weather conditions are prevailing in the area. This phenomenon is testified by modern Turkish scientists, who have attempted at various times to discover the cause of this strange phenomenon, but due to the muddy composition of the seabed, their efforts have been fruitless.

Borrowing from several earlier architectural styles, Anthemius of Tralles and Isidorus of Miletus created the masterpiece of sixth-century Byzantium. Although they were not professional architects, Emperor Justinian chose them, presumably because they had helped construct some of his military works. At any rate, they applied mathematics to the structure in a manner new to architectural design. The result was a work of grace and beauty.

Because its dome was set upon a ring of closely spaced windows, the Hagia Sophia (Church of the Holy Wisdom) was so “… full of light and sunshine; you would declare that the place is not lighted by the sun from without, but that the rays are produced within itself, such an abundance of light is poured into this church….” wrote a contemporary. Some described the space within as seeming infinite.

Emperor Justinian had spared no expense to erect this masterpiece, which went up in the astonishing span of just five years. This was possible because Justinian lavished money on the enterprise. One source estimates he spent as much as 23 million gold solidi on the building (the equivalent of $25 billion dollars* in today’s purchasing power). 40,000 pounds of silver were used in the decor alone.

When the emperor inspected the largely-completed work shortly before its consecration, he was silent for a long time. His eyes scanned its contrasts of gold with blue, the alternation of vertical and horizontal marble slabs, and the opposition of carven columns to curved arches. These created an interior beauty that made space seem to melt into space so that it was hard for the eye to gauge distances. “Solomon, I have surpassed you!” he exclaimed at last.

And in truth, no temple of antiquity had ever come close to the originality and magnificence of this. It had been made possible only by Justinian’s zeal. At first, it was simply called the “Great Church,” but later the name “Holy Wisdom” was applied to it.

On this day, December 27, 537, Patriarch Menas of Constantinople consecrated the architectural masterpiece. Eventually, a bridge linked the church directly to the nearby imperial palace. Six hundred religious workers served the building, in which important religious functions of the empire took place. According to the Patriarchate of Constantinople, these workers included 80 priests, 150 deacons, 40 deaconesses, 60 subdeacons, 160 readers, 25 chanters, and 75 doorkeepers. 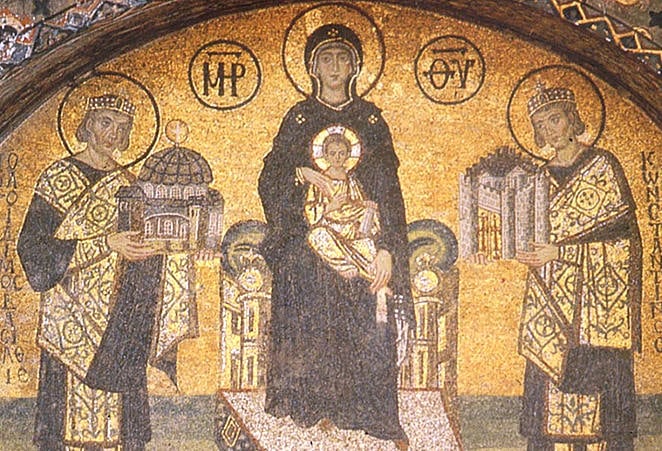 WCC call for respect for international law in the Holy Land

Memory of 20,000 Martyrs of Nicomedia