Why Saint Sisoes is at the tomb of Alexander the Great

A saint of the Orthodox Christian Church, the ascetic Sisoes, has been depicted for hundreds of years in hagiographies at the tomb of Alexander the Great as reported by protothema.gr.

Saint Sisoes is an enigma for both classical and Byzantine archeology. Qualified scientists try to decipher the symbolism of the relevant hagiographies, the first of which dates back to the 14th century AD.

They also want to answer convincingly the question: Did Saint Sisoes really see the tomb of Alexander the Great?

Sotiris Athanaselis, professor of Toxicology at the Medical School of the University of Athens, talked about Saint Sisoes.

Specifically, in his letter entitled “The Tomb of Alexander the Great in Christian Hagiography,” the professor writes: “I had the opportunity to visit many times the Church of the Dominion of the Virgin Mary in the village of Koukouli in Epirus.

When I first visited this church and saw the amazing hagiography, I was struck by a mural-hagiography of Saint Sisoes at the open tomb of Alexander the Great (!) who exclaims:

‘Seeing you in a grave, I am timid and frightened at your sight and I shed tears from my heart, bringing to my mind the debt that all people have to pay (that is, death), so I will suffer such an end. Ah, ah death, who is the one who can avoid you?’

This scene, as depicted in the above mural, in addition to the impression it caused me, also created reasonable questions for me which I tried to investigate with relative success since I am not specialized in this issue.

The disciples of Saint Sisoes, who are considered to be the first to depict the relevant scene, describe it as follows: ‘Sisoes the Great at the tomb of the glorious King of the Greeks, Alexander, is terrified and expresses his sorrow over the ephemeral glory so he weeps.’

Saint Sisoes was born in 367 and died in AD 429. He became an ascetic in the desert of Thebes in Egypt. His memory is celebrated on July 6 and belongs to the first generation of great ascetics who followed Antonios the Great.

The monastery of Abba Sisoes, located in the valley of Nitria in the region of Wadi el Natroun in Egypt, is one of the ancient monasteries of the Skete, the cradle of Christian monasticism, which has been operating since the 4th century AD.

The monastery contains the relic of Saint Sisoes which is said to be perfectly preserved on a red cloth.

The monks claim that it is common for Saint Sisoes to perform miracles for the true believers and is also considered one of the most important saints of the Coptic Christians in Egypt.

His first depictions, in the 16th century, represent him as a respected elder. Saint Sisoes is always depicted next to the tomb of Alexander the Great, pondering over the futility of life and the inevitability of death. But why Alexander the Great and not someone else?

It should be noted that similar hagiographies to that of Koukouli have been found in Great Lavra and Xiropotamos Monastery on Mount Athos, the Monastery of Barlaam in Meteora (1566) and the Monastery of Megisti in Kastelorizo.

Similiar hagiographies can be found in churches of Kastoria, such as in the chapel of Saint Ioannis the Theologian in the Monastery of Panagia Mavriotissa (1552), in Saint Nikolaos Theologinas (1662) and in the Church of John the Forerunner in the Apozari district (1727).

A similar depiction exists in the Monastery of the Holy Archangels in Milies, Pilion (1774). To all of this should be added the relatively later depiction of the Dormition of the Virgin in Koukouli, Zagori (1788).

Of particular importance is the hagiography of Saint Ioannis the Theologian in the Monastery of Panagia Mavriotissa in which Saint Sisoes is depicted in front of an open tomb where, along with the skeleton of Alexander the Great, two other skeletons are depicted.

According to one version, this shows the posthumous equality of kings and non-kings. But does this depiction indicate the burial of Alexander the Great in a communal tomb?

What makes the hagiography of Koukouli different (and unique in relation to the other hagiographies) is that on the head of the skeleton of Alexander the Great there is a golden crown.

I do not know if similar depictions exist in other churches throughout Greece besides the aforementioned. Relevant information from more experts on the subject would be particularly useful and informative.

If the exact routes of Saint Sisoes are to be found and located, will the legendary tomb of Alexander the Great be traced? “These are definitely very interesting questions that others, more specialized than me, could or will be able to answer.”

The question posed by the case of Saint Sisoes is whether his depiction should be taken as a literal fact or as a symbol.

In the first version, the historical data about a visit of Saint Sisoes to the tomb of Alexander the Great are investigated.

In the second, however, archaeologists emphasize how the hagiography reflects “the fear of death of the entire Byzantine world that has seen an empire collapse and ponder over the futility of the world,” as one can read in a related article of archaiologia.gr.

Moreover, it seems that the depictions of Saint Sisoes at the tomb of Alexander the Great is a later addition, probably made by Georgios Frangos, who painted the Monastery of Barlaam in Meteora in 1556.

Until then, while the saint was presented at an open tomb of a stranger, it was Georgios Frangos the one who painted him near the sarcophagus of Alexander the Great precisely to emphasize even more the futility of the mundane things. 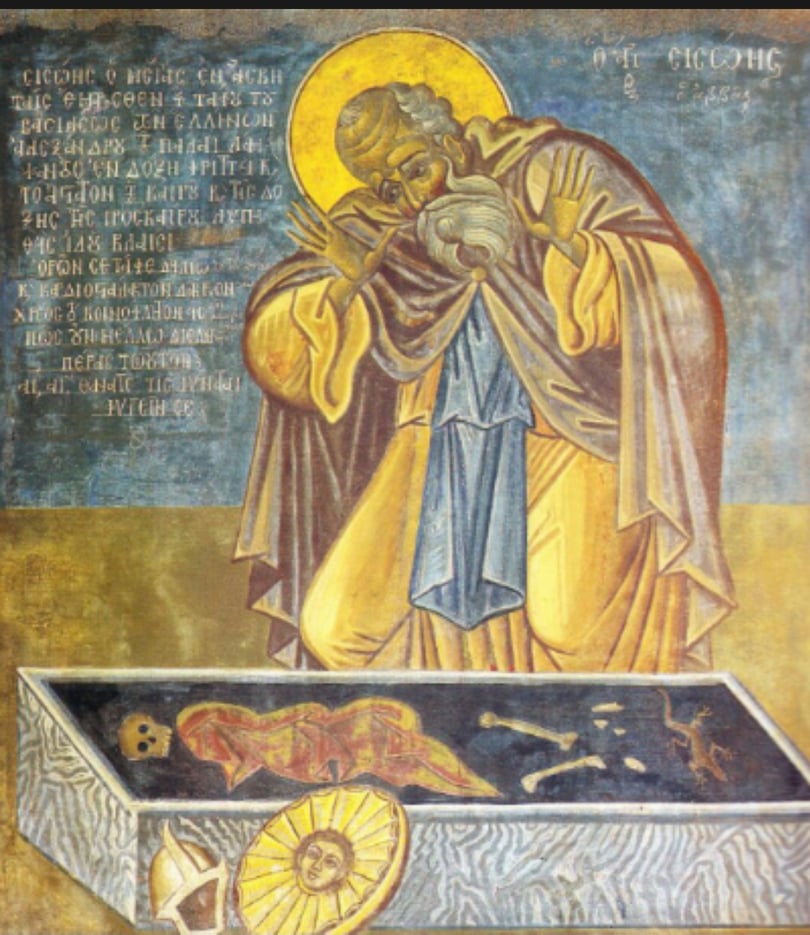 Celebration of Synaxis of All Saints in France