The aim of the conference is to further explore issues concerning the post-Byzantine Orthodox painting of the 18th, 19th and early 20th century until the liberation in the Ottoman-occupied Greek territory and especially in Macedonia, Thessaloniki and Mount Athos. Issues related to the art, technique and style of icons and monumental paintings, workshops and individual anonymous painters based or operating in these areas, the movements of painters and workshops and communication networks will be examined.
As Agathokiniki Tsilipakou, the curator of the museum, notes, “the number of painters, anonymous and well-known, most of whom came from Macedonia and Epirus, multiplied at an impressive rate, especially after the middle of the 18th century, as due to the high demand with repair and reconstruction or construction of churches in the Ottoman-occupied areas, and many of them were introduced into the profession. They moved to the then known orthodox world as well as to the prosperous Greek communities-parishes in search of work or at the invitation of lay or church leaders.” A decisive role, especially in the 19th century, is played by Mount Athos as a center of Orthodoxy and religious Orthodox art, and by Thessaloniki with its special artistic tradition from Byzantine times, as a place of education and work. 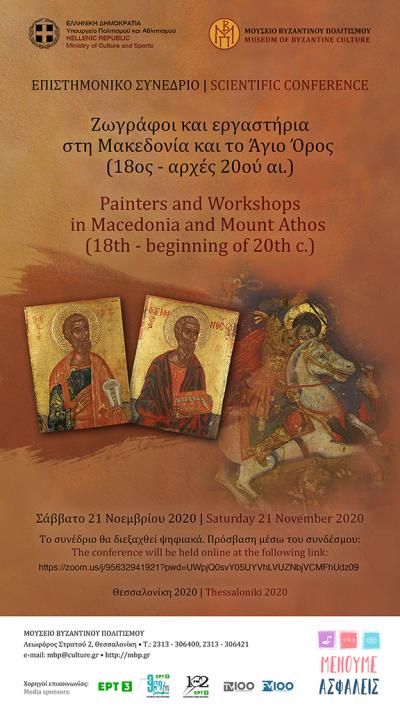 Virtual meeting on ‘Church in a Period of Pandemic,’ 9 months later (video)

Prayer of the week by the Archdiocese of Thyateira

Lebanon returned to Greece two 18th-century icons depicting Jesus and the Virgin Mary, which were seized during an auction...

Students at Holy Cross Greek Orthodox School of Theology have several new opportunities to broaden their intellectual and spiritual...

Metropolitan of Sweden met the Ambassador of Cyprus in Stockholm

The Ambassador of Cyprus in Stockholm Sotos Liasidis visited on January 19, 2021 the recently renovated Cathedral of St....