The funeral service of the blessed Metropolitan Ambrosios of Nablus and Samaria, who slept in the Lord yesterday, was held on Thursday, May 12, 2022, at the Holy Church of Saint Basil in Tripolis at 12 noon.

The service was officiated by Metropolitan Isychios of Kapitolias, who represented Patriarch Theophilos of Jerusalem. The Patriarch delivered the following obituary for the departed:

“Your Eminence, Metropolitan Alexandros of Mantineia and Kynouria,

Christian congregation of the Church

After much sorrow, we were informed of the departure to Christ of our beloved brother in Christ and co-celebrant, Metropolitan of Nablus, Ambrosios.

We mourn today before his corpse, sorrow not for death, as “those who have no hope”, but the sorrow, which our Lord Jesus Christ cried in tears at the tomb of his four-day-dead friend Lazarus.

In the hope of eternal life, therefore, brethren, we remember the loving brother of ours, and we are referring to him, that since his early youth he came to the Holy Land from his hometown Pireaus, he studied at the Patriarchal School of Saint Demetrios and after his graduation, he joined the Hagiotaphite Brotherhood and was ordained a Deacon and Priest.

He studied theology at the University of Athens and served in various posts of the Patriarchate, as the Master of Ceremonies, bookkeeper, Archivist, Teacher at the Patriarchal School, Hegoumen of the Theotokos’ Tomb in Gethsemane, Patriarchal Representative in Acre. In 1981 he was elected and ordained Archbishop of Nablus and in 1999 he was named Metropolitan.

In the last years of his life, he became ill and was accepted and hosted, given the care and attention of your very dear to us Eminence, to the Old-people’s Home, at your Metropolis of Mantineia and Kynouria. Formerly he had received the brotherly hospitality from the Holy Metropolis of Veria, Naoussa and Campania.

The Hagiotaphite Brotherhood, which I represent along with the Exarch in Athens of the Holy Sepulchre, His Grace Archimandrite Raphael, after the order of H.H. Beatitude our Father and Patriarch of Jerusalem Theophilos III, expresses its deepest thanks to your Eminence and the tireless working, willing and polite staff of the Old-people’s Home.

Escorting today with this service our departed brother to his last residence on earth and the permanent heavenly one, we entreat the Lord of life to forsake every voluntary or involuntary sin of his and deem him worthy of the eternal beatitude of the Resurrection and the community along with the just and the righteous.

May his memory be everlasting!”

Metropolitan Isychios of Kapitolias was accompanied by the Exarch of the Holy Sepulchre in Greece, Archimandrite Raphael.

The departed Metropolitan Ambrosios of Nablus was honored by the presence of Bishop Theoklitos of Tegea, Metropolitan George of Kitro, Katerini, and Platamona, and many clergymen and faithful Christians from the Holy Metropolis of Mantineia and Kynouria. The departed was buried at the cemetery of Tripolis.

The Hagiotaphite Brotherhood prays for the repose of his soul in the land of the living with the just and the righteous. 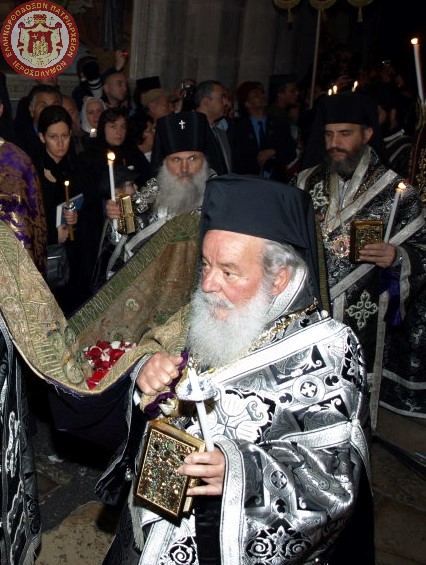 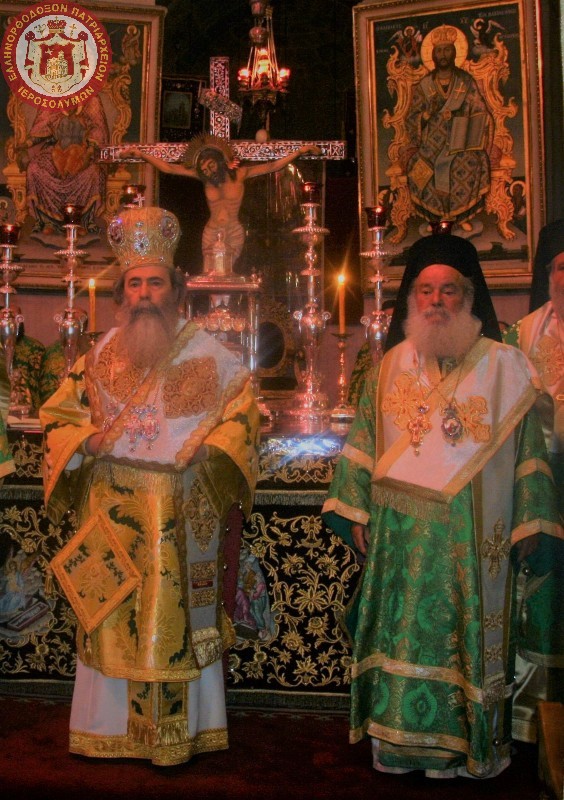 The Cardinal Fernando Filoni visited the Patriarchate of Jerusalem