Father Daniel Ene, Eparchy Secretary and Dean of New York, New England, and US East Coast, visited Colombia at the beginning of the month. It was the first visit of a Romanian Orthodox priest in this country. On this occasion, Romanians from Bogota heard for the first time the Divine Liturgy in their native language.

Father Daniel Ene traveled to Colombia between March 25 and April 9, invited by HE Claudia Tușa, Chargée d’Affairs of Romania to the Republic of Colombia.

The priest offered blessings and gifts from His Eminence Nicolae, the Romanian Orthodox Metropolitan of the Two Americas, and had multiple meetings with Romanians and other Orthodox communities from this country.

After a talk with important members of the Romanian community from Bogota, the cleric traveled to the city of Cali, where he prayed with young Constantin Cătălin Botezat, checked in the local hospital for more than a month.

On Sunday, March 28, the Romanian Dean of New York celebrated the first-ever Romanian-language Divine Liturgy at the “Dormition of the Mother of God” Greek Cathedral in Bogota.

He was joined in celebration by HE Timoteo Luis Antonio Torres Esquivel, Bishop of Assos – Auxiliary for Colombia and Venezuela of the Greek Orthodox Metropolis of Mexico, Central America, Colombia, Venezuela, and the Caribbean Islands (Ecumenical Patriarchate).

For the first time in decades, Romanians from Bogota could hear a liturgical prayer in the Romanian language.

“It was the most beautiful Easter gift,” said Scripcariu Mani Monica, owner of a small Romanian restaurant from the Colombian capital city.

Father Daniel Ene met afterwards the Romanians from Barranquilla and Cartagena, where he discussed the opportunity of creating a Romanian Orthodox community at Barranquilla, where there are many Antiochian Orthodox faithful, but no Orthodox church.

Together with Ambassador Claudia Tușa and HE Timoteo of Assos, Father Daniel Ene also visited the city of Cucuta, by the border with Venezuela, where there is the greatest migrant crisis in the world, with almost 5,000 Venezuelans entering daily in Columbia in search of a better life.

In a former Catholic nunnery from Cucuta, the Diocese of Assos will soon establish the first Theological Seminary and the first Orthodox nunnery in South America. 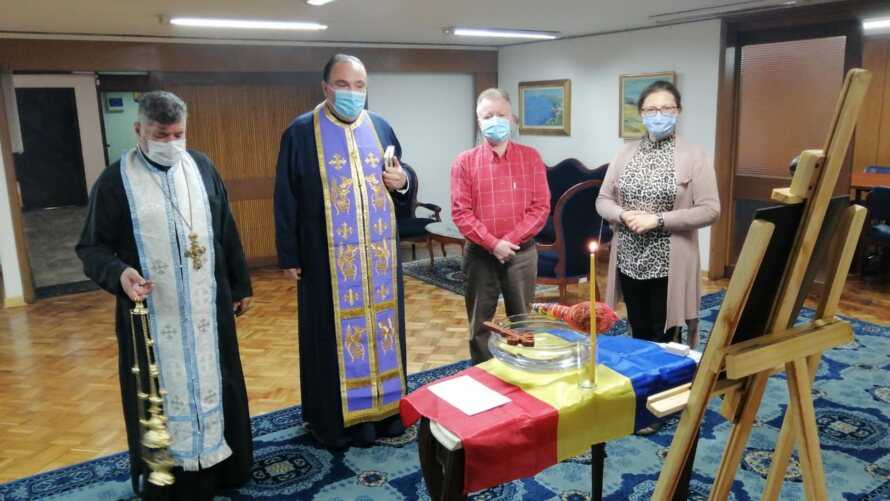 According to the Romanian Embassy, there are approximately 400 Romanians living in Colombia and other 250 in Panama and the Dominican Republic.

Some of them are there for over 40 years. The most numerous community is grouped in the metropolitan area of Bogota. There are also three Romanian honorary consulates in Medellin, Cali, and Barranquilla.

Father Daniel Ene’s visit to Venezuela, at the Romanian “Holy Emperors Constantine and Helen” Church in Caracas, was postponed, because the border between Venezuela and Columbia was closed by the order of the President of Venezuela.

Assistant Bishop of Prahova: Saint Ephraim is a son of the Resurrection

Bishop of Sinaia: The construction of the National Cathedral is a call and a still breeze of resurrection for our nation

Archbishop of Australia: Let us turn our strength to love