On Monday, November 21, 2022, the Patriarchate of Jerusalem celebrated the feast of the Synaxis of the Holy Archangels Michael and Gabriel and all the Bodiless Hosts.

By the term “Synaxis”, the Church means the assembly – gathering of its members, in order to give thanks and praise the Archangels and especially the Archangel Michael, because he resisted the rebellion of Lucifer against God saying: “Let us stand firm, let us stand in fear » and he was assembled as the archangel in the name of the Highest God.

This feast was celebrated:

1. In Yaffo, at the Holy Church of the Archangels, which was constructed by the Hegoumen, Archbishop Damascene of Yaffo, after the total destruction of the old Church due to a fire.

The Divine Liturgy was officiated by Patriarch Theophilos of Jerusalem with the co-celebration of Metropolitan Kyriakos of Nazareth, the visiting from Greece, Metropolitan Ioustinos of Nea Krini and Kalamaria, the Hegoumen Archbishop Damascene of Yaffo, Archbishop Aristarchos Theophilos of Constantina, the Hieromonks and Archimandrites, Nectarios, Ieronymos, and Nifon, Arab-speaking Priests, Priests visiting from Greece, among whom the Archimandrite Timotheos from the Holy Metropolis of Florina, Archdeacon Mark, and Hierodeacons Eulogios and Dositheos. The chanting was delivered by a Byzantine singer from Greece on the right and the Community of Yaffo Choir in Arabic on the left. The Liturgy was attended by the Ambassador of Greece to Tel Aviv Mr. Kyriakos Loukakis and military attaché, the Yaffo congregation, and members of the Russian-speaking and Romanian-speaking community of the Patriarchate.

Before the Holy Communion, Patriarch Theophilos of Jerusalem delivered the following Sermon:

“Bless the Lord, ye his angels, that excel in strength, that do his commandments, hearkening unto the voice of his word. Bless ye the Lord, all ye his hosts; ye ministers of his, that do his pleasure” (Psalm 102: 20-21) the psalmist proclaims.

The noetic hosts of the bodiless angelic forces have gathered us all in this Church which bears their name, in your biblical and historical town of Yaffo, to celebrate in worship the Synaxis of the Supreme Commanders of the Angels, Michael and Gabriel, and the rest of the holy bodiless heavenly hosts.

These heavenly bodiless hosts who are commemorated in both the Old and the New Testament belong to nine orders, distinguished by their names: Seraphim, Cherubim, Thrones, Dominions, Virtues, Powers, Principalities, Archangels, Angels. Their primary and main duty is the unceasing doxology of the Holy Triune God, according to the testimony of the Prophet Isaiah: “In the year that king Uzziah died I saw also the Lord sitting upon a throne, high and lifted up, and his train filled the temple. Above it stood the seraphims: each one had six wings; with twain he covered his face, and with twain he covered his feet, and with twain he did fly. And one cried unto another, and said, Holy, holy, holy, is the Lord of hosts: the whole earth is full of his glory” (Isaiah 6:1-3).

Moreover, the Evangelist Luke mentions the joyful message of the angel to the shepherds: “For unto you is born this day in the city of David a Saviour, which is Christ the Lord. And suddenly there was with the angel a multitude of the heavenly host praising God, and saying, Glory to God in the highest, and on earth peace, goodwill toward men” (Luke 2:11, 13-14).

As far as the nature and the property of the angels, Saint Paul says that they are “ministering spirits, sent forth to minister for them who shall be heirs of salvation” (Hebrews 1:14). Interpreting these words, Saint Theophylaktos says: “it stimulates the minds of the hearers by showing the great guardianship of God towards us, that even the angels who are superior in relation to us have been ordered to minister to our salvation”. This, after all, is confirmed by the Lord’s words: “Take heed that ye despise not one of these little ones; for I say unto you, that in heaven their angels do always behold the face of my Father which is in heaven” (Matt. 18:10). For this, Zigavinos says: “that the angels have so much boldness before God that they forever behold God in the heavens”.

Indeed, the angels exist in the heavens where they see God the Father. And this is because, as the psalmist says, “The Lord hath prepared his throne in the heavens; and his kingdom ruleth over all” (Psalm 103:19). And the Kingdom of God which dominates or rather is extended to the whole creation, is no other than the creation of the whole world, both visible and invisible, and man is its crown, who has been created according to the image and likeness of God (cf. Gen. 1:2).

It is noteworthy that the “image” refers to the soul of man, while the “likeness” to his will is man’s free will to reach perfection. Let us hear Saint Basil the Great: “The image is given to us by nature, while the likeness we acquire later in accordance and by one’s own judgment”.

In other words, the likeness begins in our earthly life and reaches its peak in the heavenly life, where “we shall be like him [God]; for we shall see him as he is” (1 John 3:2). And it is true, as Saint Paul says, that as long as we are in this corrupt body we sigh because it is with much desire that we long to put on us, like another garment, the permanent dwelling place which will be given to us in heaven. “For in this we groan, earnestly desiring to be clothed upon with our house which is from heaven” (2 Cor. 5:2).

From the abiding abode in the heavens emanates the joy of incorruption. And this, because all who dwell in the heavenly city, I mean the orders of the Holy Angels, have incorruptible bodies, says Saint Cyril of Alexandria.

Our Holy Church honours and venerates the synaxis of the holy bodiless and heavenly hosts, and especially their Supreme Commanders Gabriel and the most distinguished Michael the Commander because they have displayed many offers and benefits to our human race. Moreover, the Commander of the angels Michael is the one who gathered all the angelic orders and said “Pay heed” when he saw the apostate angels, namely the proud satan falling down from heaven, as we heard in today’s Gospel narrative when the Lord said to His Disciples “I beheld Satan as lightning fall from heaven” (Luke 10:18).

Interpreting these words of the Lord, Saint Basil the Great says that satan fell from the power he once possessed: “namely from his own power and fell down so that he may be stepped upon by those who hope in Christ”.

The “pay heed” of Archangel Michael on the one hand, and the command of our Saviour Jesus Christ “Notwithstanding in this rejoice not, that the spirits are subject unto you; but rather rejoice, because your names are written in heaven” (Luke 10:20) on the other, are addressed to us who have been renewed and hope in Christ crucified and resurrected, as Saint Peter preaches: “Blessed be the God and Father of our Lord Jesus Christ, which according to his abundant mercy hath begotten us again unto a lively hope by the resurrection of Jesus Christ from the dead” (1 Peter 1:3).

Therefore, let us say along with the hymnographer: “Wherever thy grace casteth its shadow, O Archangel, thence is the power of the devil driven away, for fallen Lucifer cannot bear to stand before thy light. Wherefore, we implore thee to extinguish his fiery darts cast against us, and by thy mediation deliver us from his stumbling blocks, O praiseworthy Archangel Michael” (Glory of praises). Amen. Many happy returns and blessed Christmas!”

At noon Archbishop Damascene hosted a reception and a meal.

2. In the Old City of Jerusalem, at the Holy Monastery of the Archangels, Vespers on Sunday afternoon was led by the Hegoumen and renovator of the Church, Archbishop Demetrios of Lydda, with the co-celebration of the Elder Dragoman Archimandrite Mattheos, Archimandrite Ieronymos, Arab-speaking Priests and Hierodeacon Simeon. The chanting was delivered by Vasilios Gotsopoulos and the students of the Patriarchal School of Zion, with the participation in prayer of Greeks and other faithful Christians and nuns. On Monday morning the Divine Liturgy was officiated by Archbishop Aristovoulos of Madaba, with the co-celebration of Archimandrite Dionysios, Fr Nectarios, and Hierodeacons Simeon and Patrikios, at the presence of the Consul General of Greece in Jerusalem Mr. Evangelos Vlioras.

The Episcopal Entourage and the congregation were offered a reception by the Hegoumen of the Monastery, Archbishop Demetrios of Lydda. 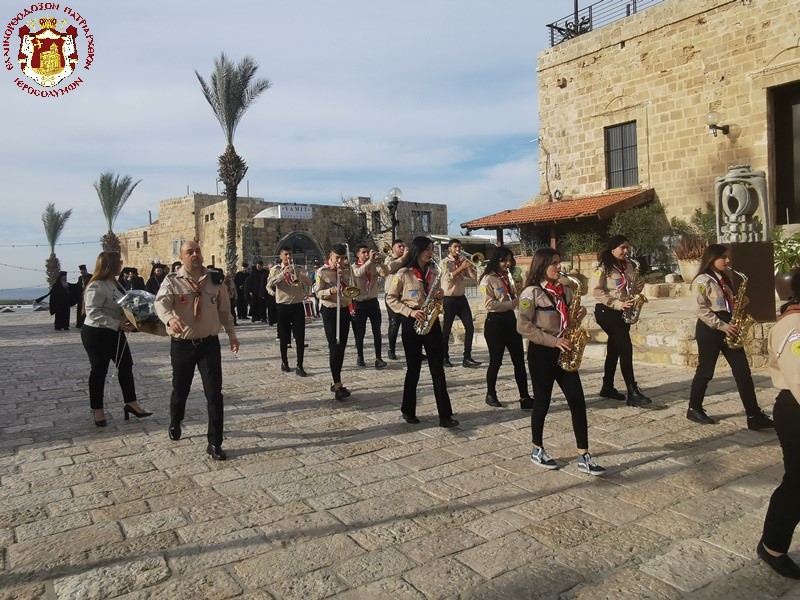 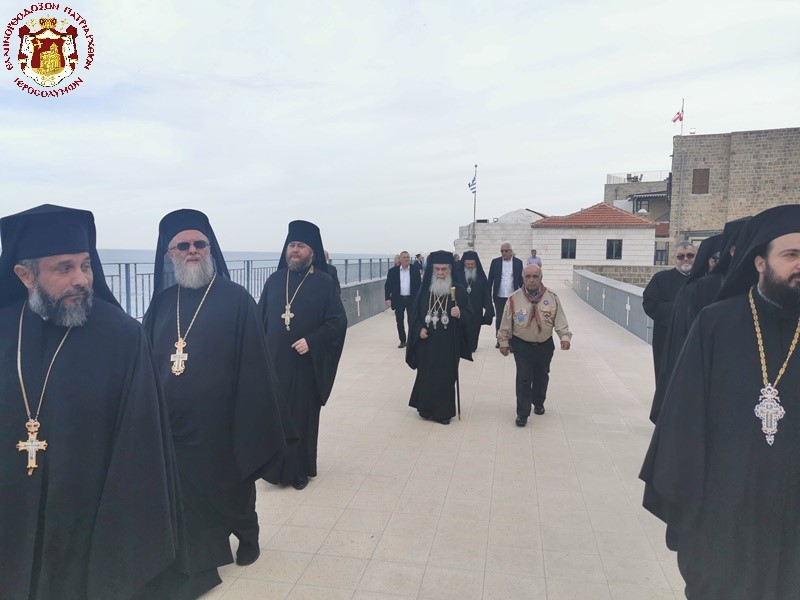 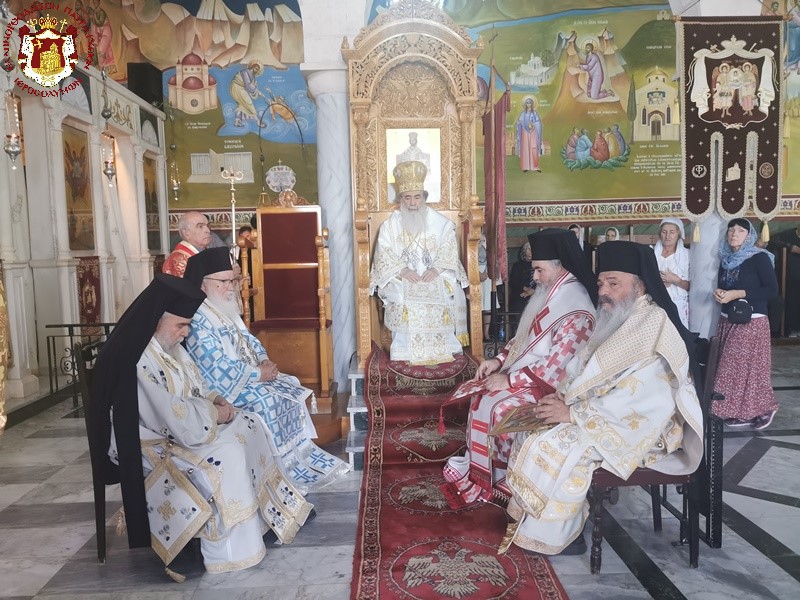 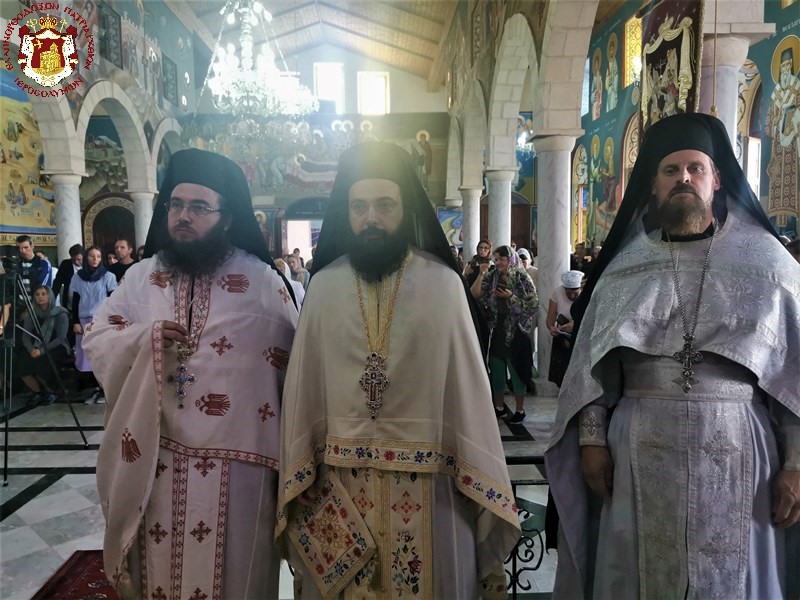 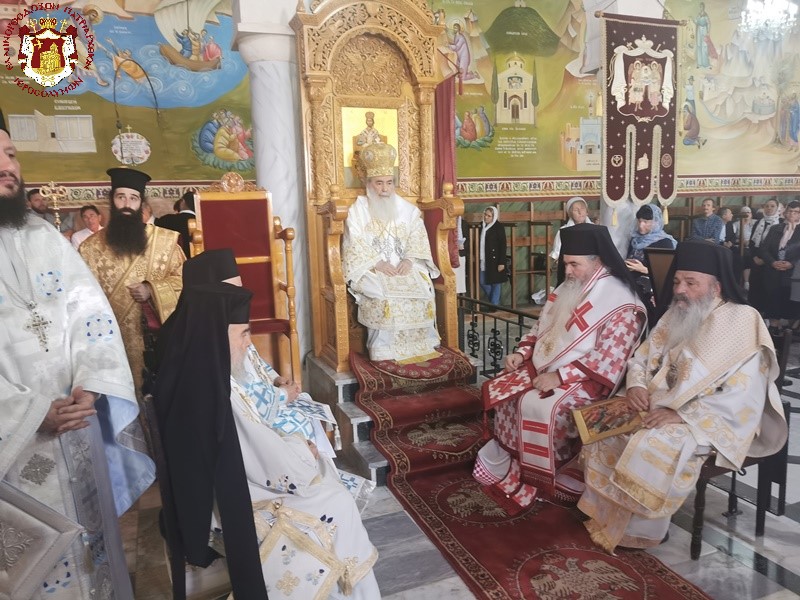 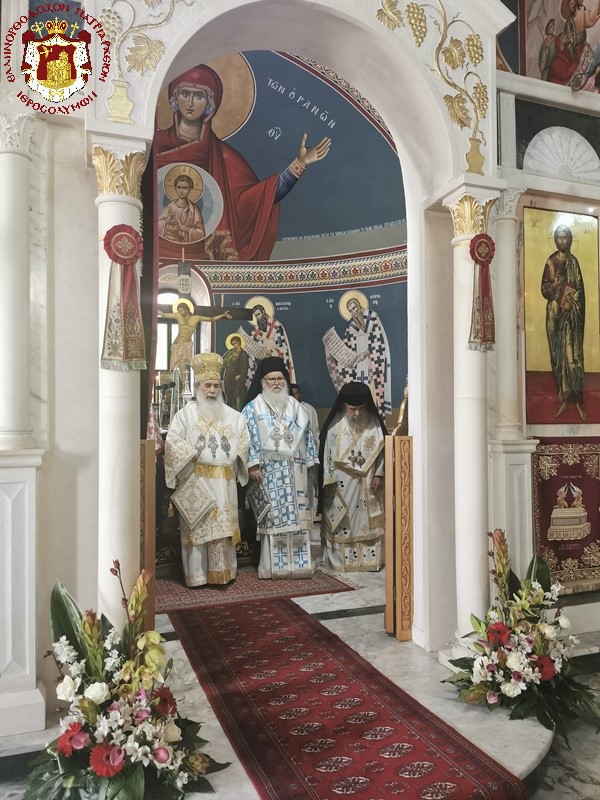 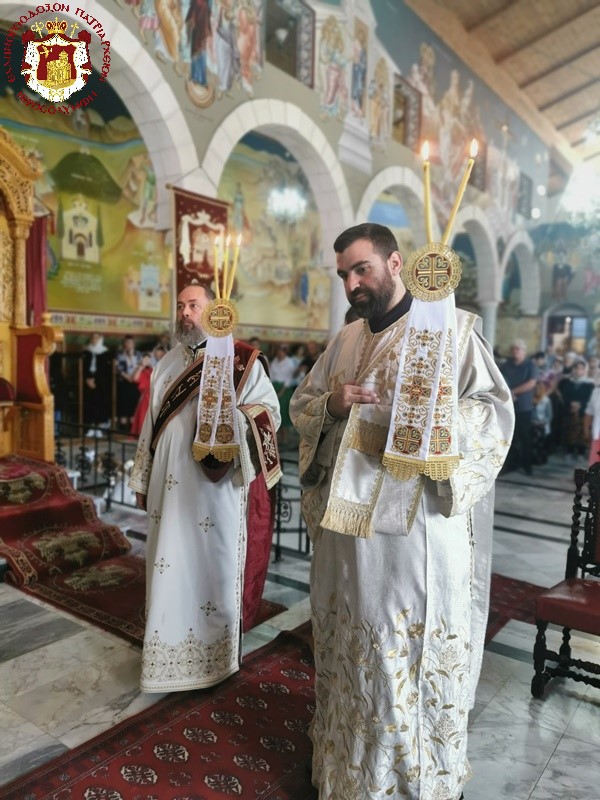 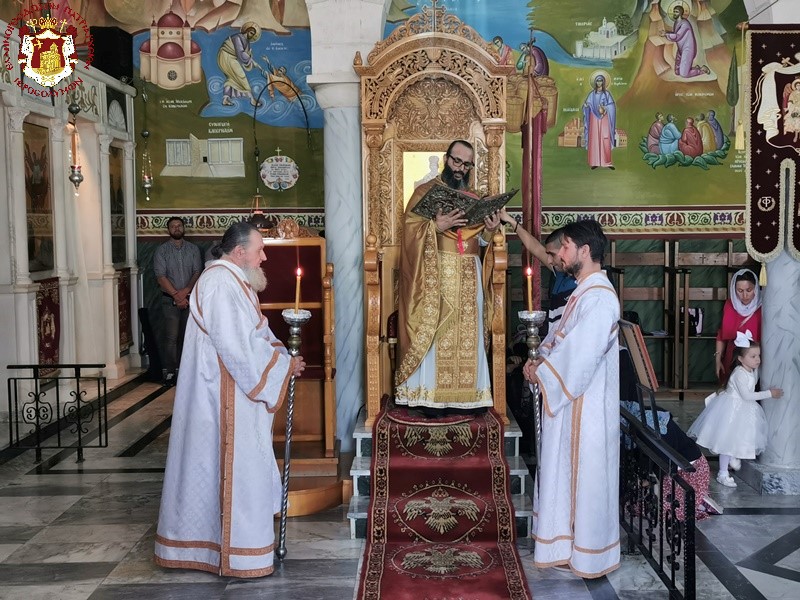 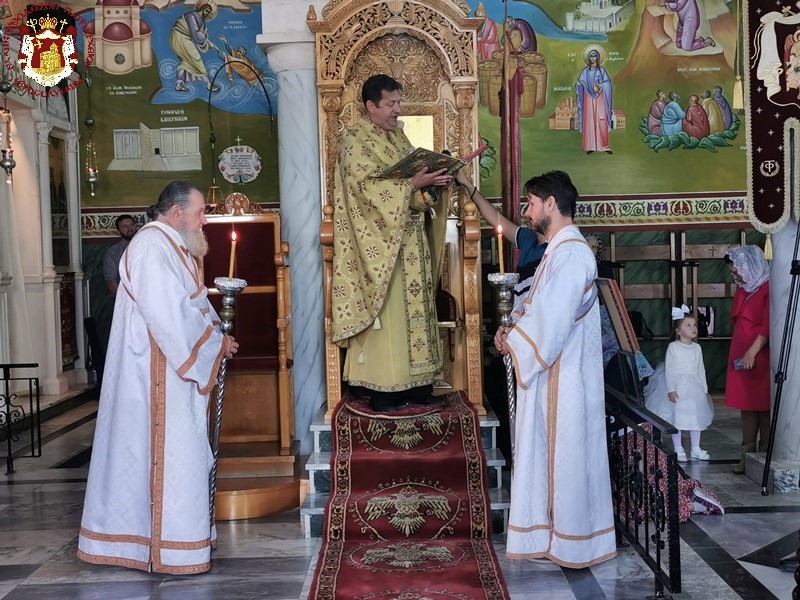 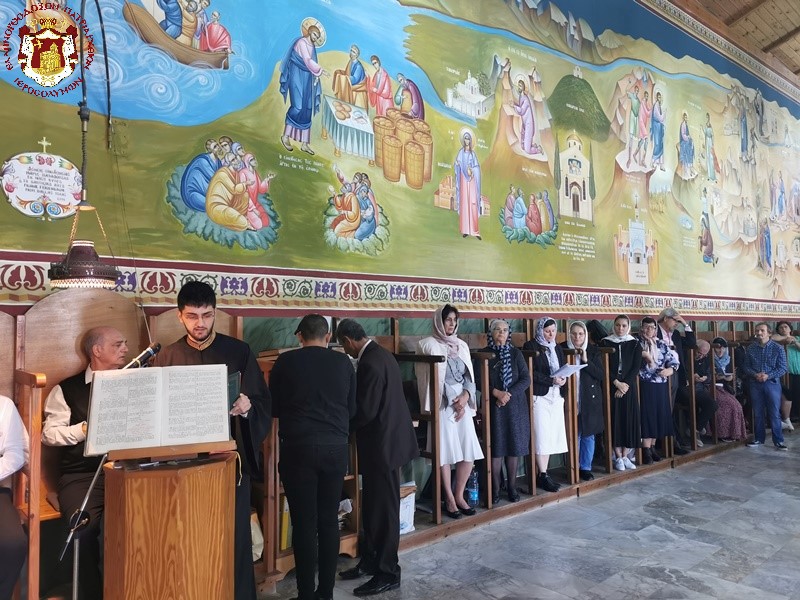 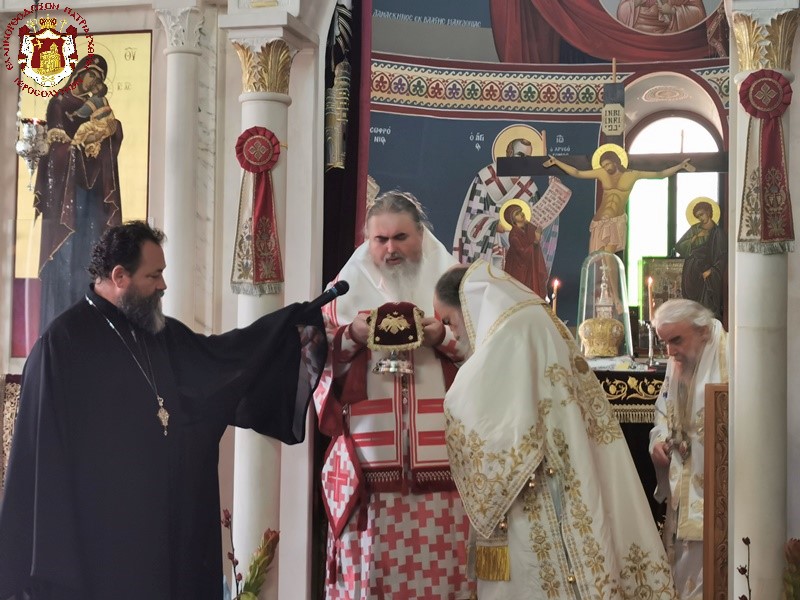 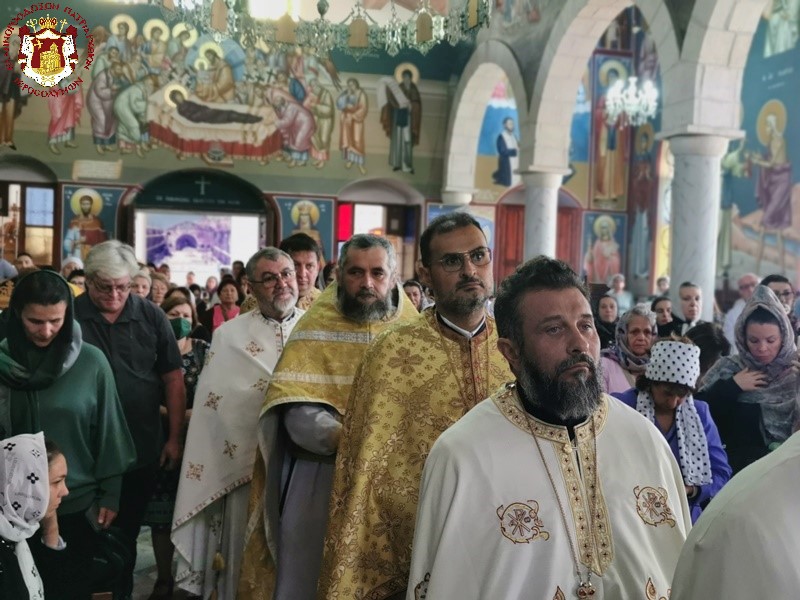 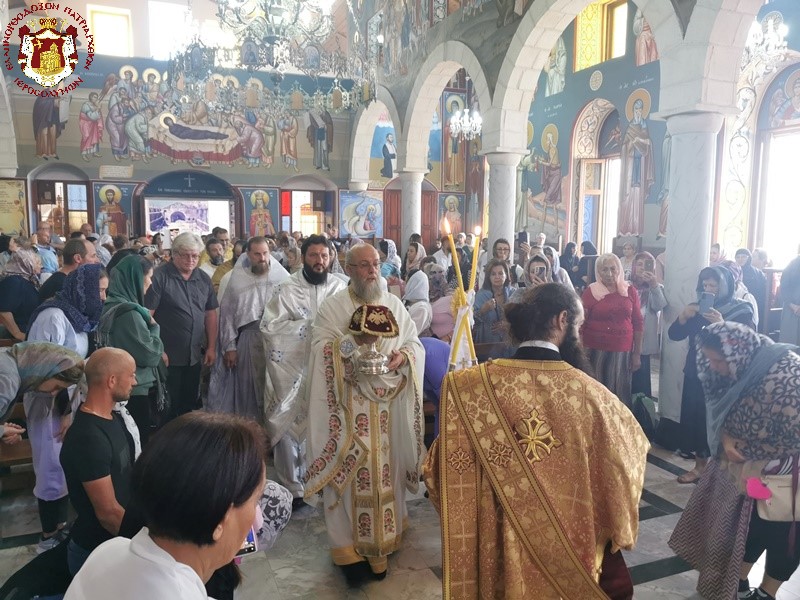 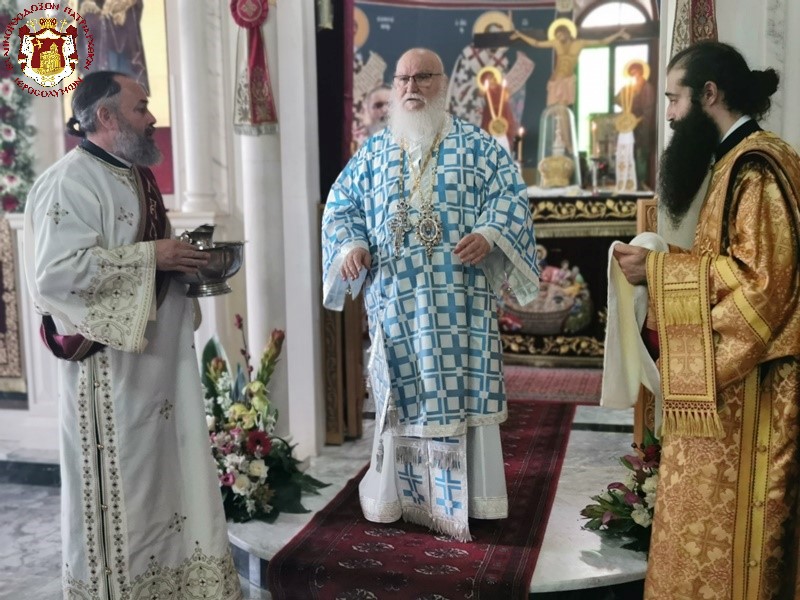 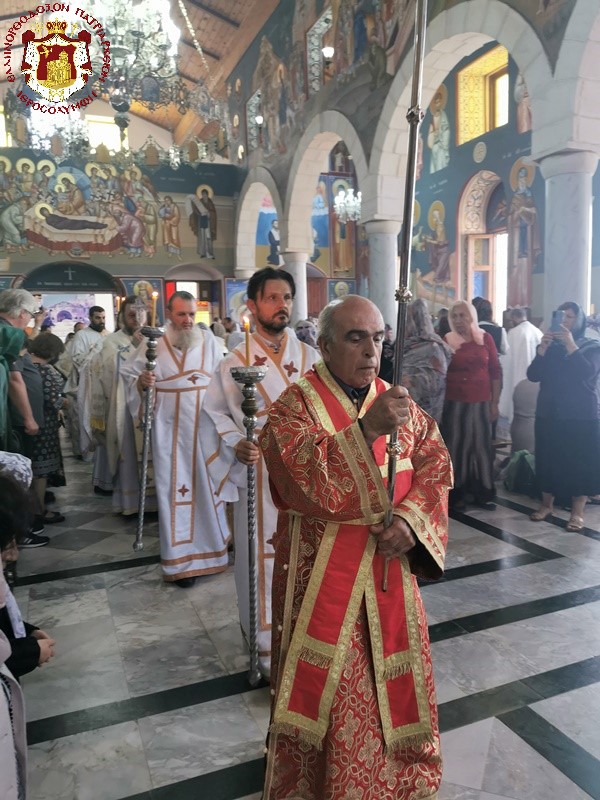 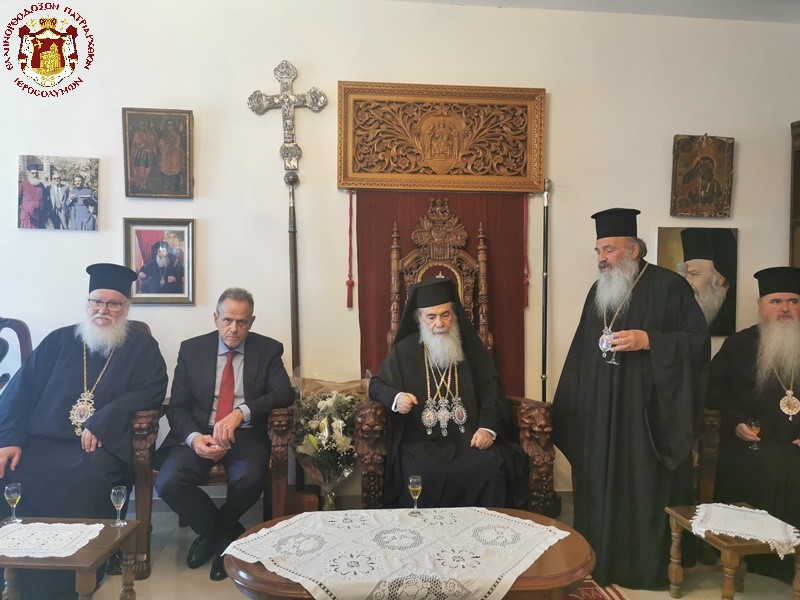