On Saturday, June 25, 2022, the Patriarchate of Jerusalem celebrated the feast of Saint Onuphrius the Egyptian.

On this day the Church commemorates that Saint Onuphrius lived initially in a Coenobitic Monastery in Hermoupolis. Then, imitating the Prophet Elijah and Saint John the Baptist, he retreated to the deepest desert and lived in strict ascesis for sixty years (without seeing any other man). At the end of his life, he met with Saint Pafnutios. When the Saint slept in the Lord, “his shed collapsed, the palm tree withered and the spring of water from which he used to drink dried up”.

The commemoration of Saint Onuphrius was celebrated at the Holy Monastery dedicated to him near Siloan’s pool, at the Potter’s field which the Pharisees bought with the thirty silver coins Judas returned to them, “to bury the foreigners”.

In this ancient Monastery which was renovated by Hagiotaphite Fathers in the 19th and 20th centuries, the Service of Vespers was held by Metropolitan Isychios of Kapitolias, and the Divine Liturgy was officiated by Patriarch Thephilos of Jerusalem, with the co-celebration of Metropolitan Isychios of Kapitolias Archbishop Aristarchos of Constantina, Hagiotaphite Hieromonks and Hieromonks from the Monastery Oblous from the Metropolis of Patra. The chanting was delivered by Hierodeacons Simeon and Dositheos. The service was attended by monks, nuns, and faithful Christians from Jerusalem, along with pilgrims from Greece.

The Patriarch of Jerusalem delivered the following sermon before the Holy Communion:

“But the righteous live forever, and their reward is with the Lord; the Most High takes care of them. Therefore, they will receive a glorious crown and a beautiful diadem from the hand of the Lord, because with his right hand he will cover them, and with his arm, he will shield them” (Wisdom of Solomon, 5:15-16), the wise Solomon says.

The grace of the Holy Spirit has gathered us today in this historic and biblical place, “the potter’s field…[which is known as ]the field of blood, unto this day” (Matt. 27:7-8), where the Monastery of Saint Onuphrius lies, so that we may celebrate his holy commemoration in reverence.

Our Holy Father Onuphrius came from Egypt. When he heard about the ascetic manner of living in the desert that the Prophet Elijah had kept, as well as that of Saint John the Baptist, he retreated to the desert and remained there for sixty years, without seeing any person at all during this time, as his Synaxarist writes, referring to the witness of Saint Pafnutius, who met Saint Onuphrius in the deepest desert.

Our Holy Father Onuphrius belongs to the chorea of the holy and righteous who dwell in the kingdom of heaven, as the wise Solomon says: “But the righteous live forever, and their reward is with the Lord; the Most High takes care of them” (Wisdom of Solomon, 5:15). Moreover, this is also claimed by his hymnographer; “wholly mingled with God through love, thou becamest a partaker of His Kingdom; and thou hast received the enjoyment of its delight the torrent of life, the choir of them that keep festival, and the joy that ageth not, O thrice-blessed Onuphrius” (Matins, Ode 9, Troparion 2).

Referring to the leader and integrator of our faith Jesus Christ (cf. Hebrews 12:2) and paying heed to the Lord’s advice, “But seek ye first the kingdom of God, and his righteousness; and all these things shall be added unto you” (Matt. 6:33), our father Onuphrius set his heart in seeking the kingdom of God with all his mind and might. “Commit thy way unto the Lord; trust also in him, and he shall bring it to pass. And he shall bring forth thy righteousness as the light, and thy judgment as the noonday” (Psalm 37:5-6).

Indeed, the application of the Lord’s commandments in both words and actions, made Saint Onuphrius prominent, while his righteousness, namely his holiness, became a shining ray of light, as Saint Athanasius says. By the enlightening power of the Holy Spirit, the knowledge of God made our Father Onuphrius holy and reverend, as Saint Clement of Alexandria says: “The one who is known to God is righteous and holy”.

In other words, Saint Onuphrius “put off concerning the former conversation the old man, which is corrupt according to the deceitful lusts; and [he was] renewed in the spirit of [his] mind” (cf. Eph. 4:22-23), according to Saint Paul’s advice. That is why his hymnographer says, “O Love, thou transcendently shining light! O sum of all the virtues, whoever fillest the heavenly orders with gladness and grace, and hast made thy dwelling in the Saints, the Patriarchs, Prophets and Apostles: by their prayers dwell also in us, that with them we may sing to God: Alleluia” (Matins, Oikos).

Referring to the holy and righteous man of God, Saint Clement of Alexandria says: “The whole life of the holy and righteous is a holy feast. For example, his sacrifices are prayers and praises and before his meals, his studies are those of the scriptures, psalms and praises, during the meals and before his sleep and during the night, again prayers. Through them he unites himself with the divine chorea, unceasingly keeping his mind attached to the divine vision”.

Through his ascetic striving in the desert, namely the continuous commemoration of the divine name and the unceasing prayer and worship, according to the words, to “serve God without fear, in holiness and righteousness before him, all the days of our life” (Luke 1:74-75). Our Father Onuphrius attained the continuous vision of God’s glory, just like the Holy Apostles on Mount Tabor on the day of the Transfiguration of our Lord.

In other words, blessed Onuphrius united himself with the “divine chorea”, becoming a fellow citizen of the Angels and of the righteous and the Saints, but also a communicant and co-inheritor of the divine glory.

My dear brethren, we who celebrate the holy commemoration of our Holy Father Onuphrius are called to study thoroughly his virtues, because in this Saint, as well as in all other Saints, the true light was revealed, that is, the redeeming truth of our God and Saviour Jesus Christ.

Let us entreat our Holy Father Onuphrius who has boldness before the Lord, so that along with the intercessions of our Most-Blessed Lady Theotokos and Ever-Virgin Mary, may pray for the salvation of our souls. Amen! Many happy returns!”

The Divine Liturgy was followed by a procession to the tomb of Saint Iouvenalios, the first Patriarch of Jerusalem, the tomb of the renovator of the Monastery Hieromonk Cyril, and then a Trisagion was read for the repose of the souls of the Founders of the Monastery and of Nun Seraphima. The precession concluded with the prayer for the fruit.

At the end of the Liturgy, the renovator of the Monastery Reverend Nun Paisia hosted a reception for the Patriarch of Jerusalem at the Hegoumeneion. 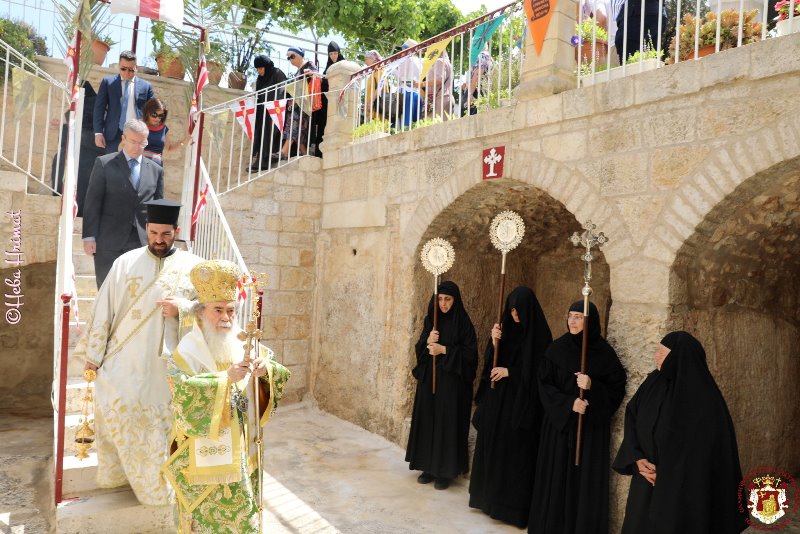 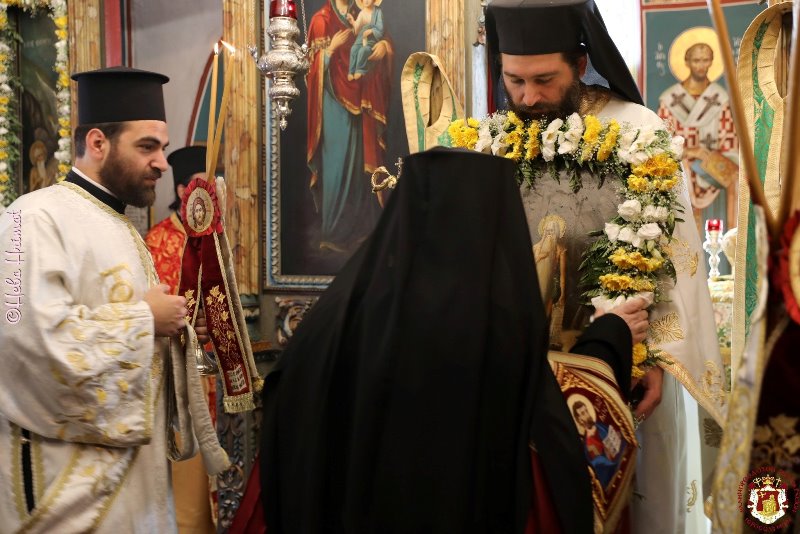 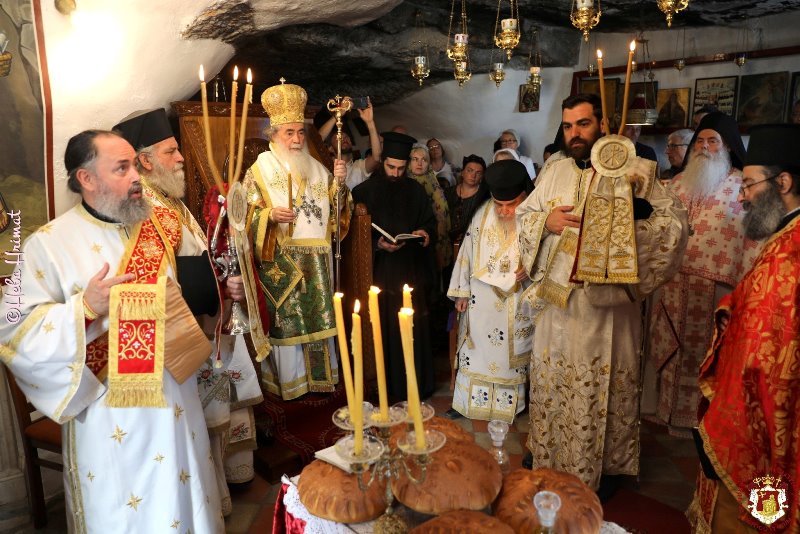 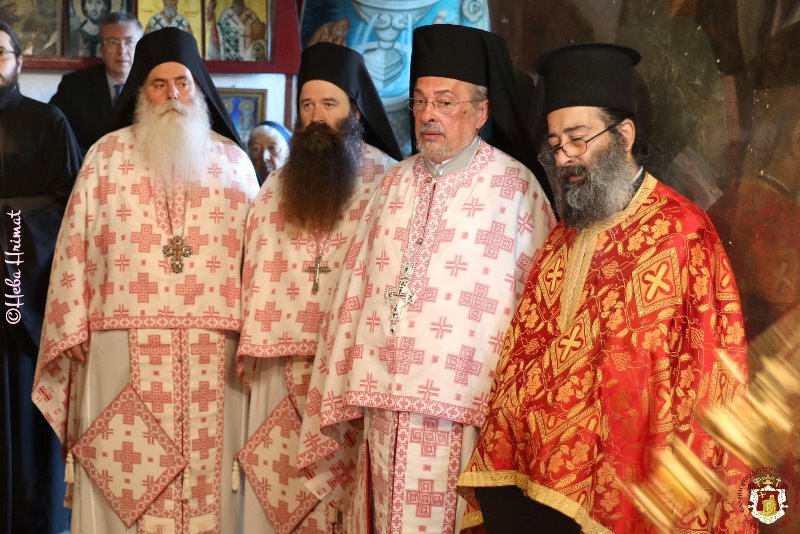 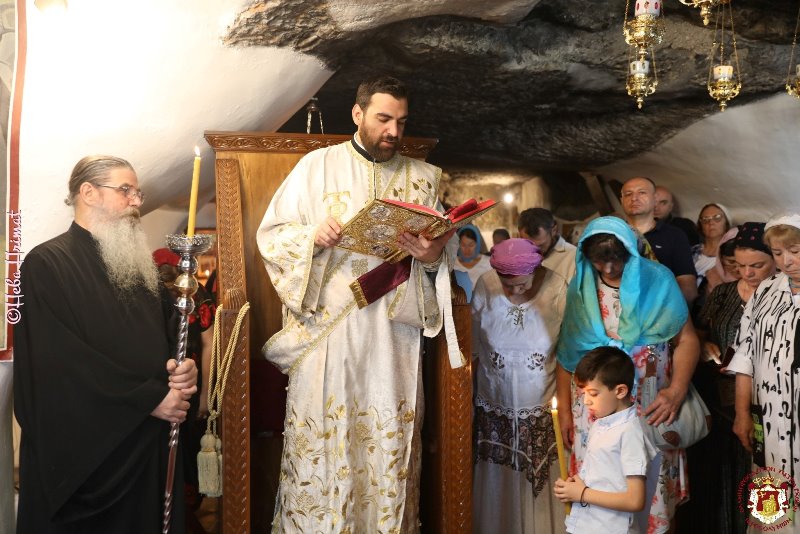 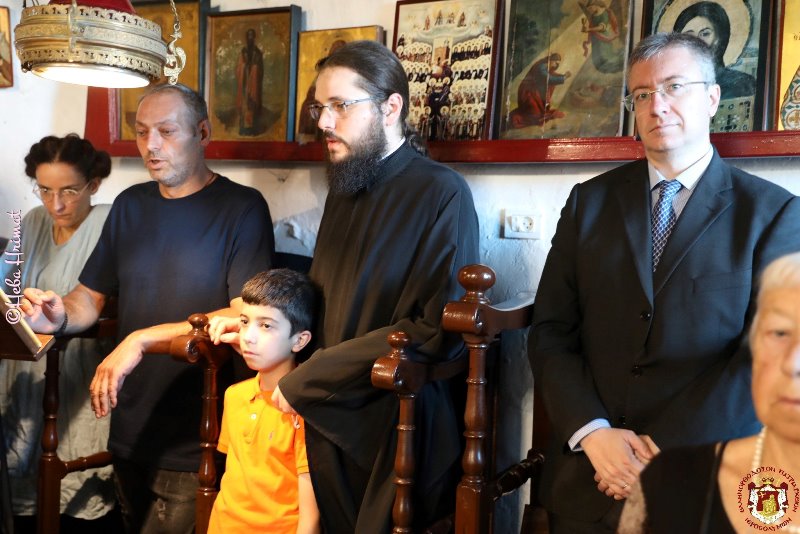 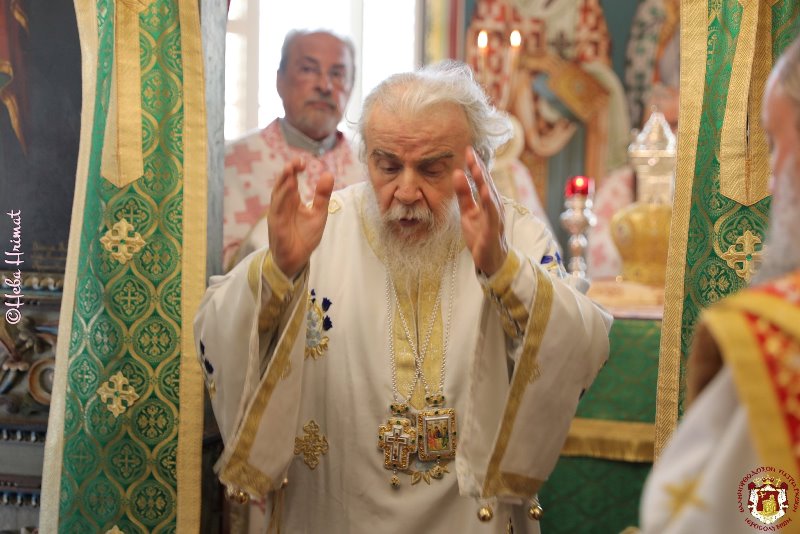 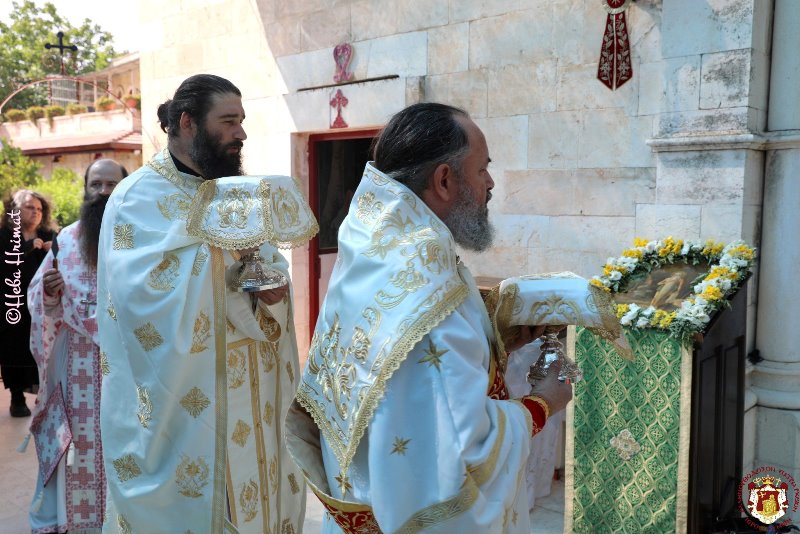 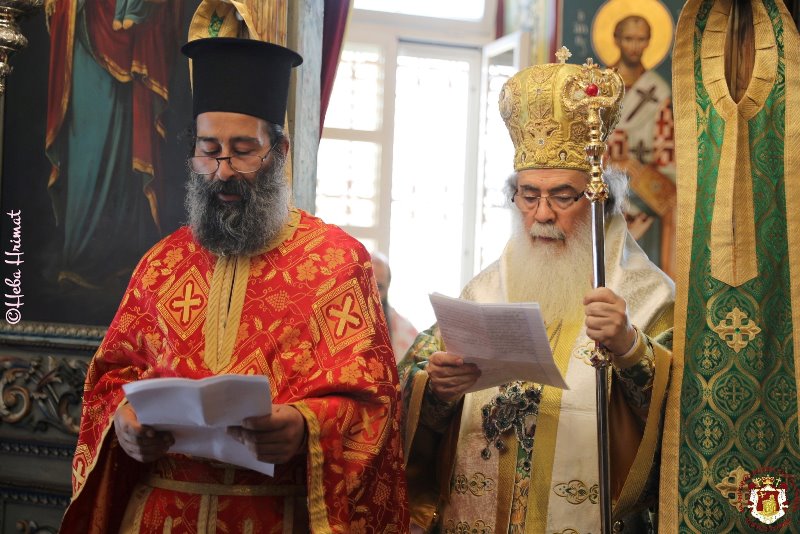 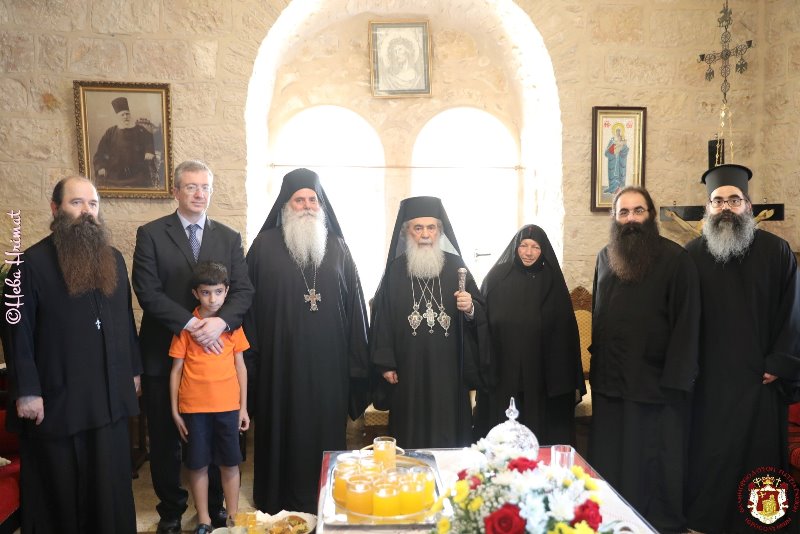 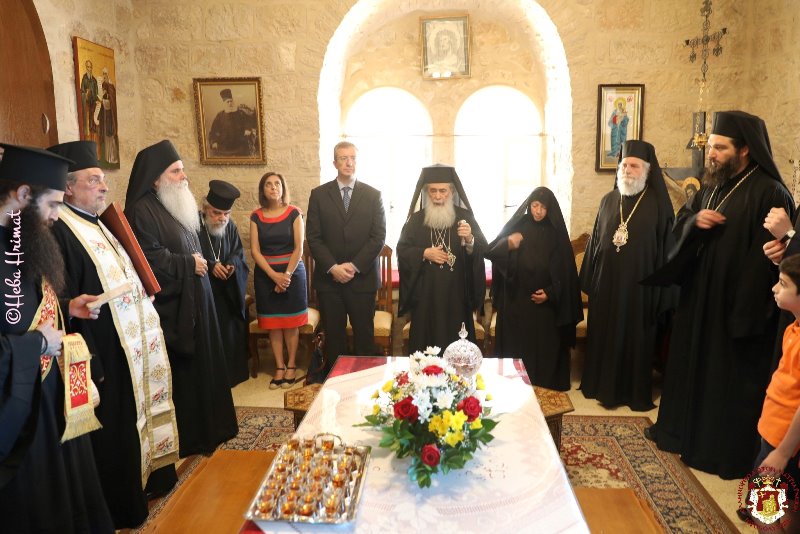 Archbishop of America: Peter demonstrates the “ups and downs” that are part of the spiritual life