With Patriarchal splendor, the Greek Community of Cairo celebrated once again the commemoration of the Day of Pentecost at the Greek Orthodox Patriarchal Church of St. Nicholas in Hamzawi.

Fifty days after Christ’s Resurrection, the promise of the epiphany of the Holy Spirit from the God-Man to his disciples and to the Apostles remains active to all, waiting for the open souls and the long prepared hearts to be instilled.

On such a day, Pope and Patriarch Theodore II of Alexandria decided to stand as a dynamic intermediary and distribute to all according to the Church’s rite the Divine Grace of Pentecost. He presided over the Liturgy and co-officiated the Vespers of the Genuflection with the Patriarchal Commissioner and Metropolitan Nicodemus of Memphis, but also with all the members of the clergy contributing to the culmination of the Divine Mystagogy. The Hymns were sung by the new Cantor of the Greek Community of Cairo, Mr. Alexandros Rigakis and the Arabic-speaking Cantors Mr. Tony Atala and Paisios Bishoi.

After the end of the Liturgy, the Patriarch directed the soul vibration in the Holy Church by kneeling down and with raised hands he let himself be in the bliss of the moment, body and soul.

“Blessed are You, O Christ our God. You made the fishermen all-wise by sending down upon them the Holy Spirit and through them You drew the world into Your net O Lover of mankind, glory to You.”

At that moment they all bowed, knelt and let themselves go, but above all they trusted in the Divine Providence.

In his speech the Patriarch opened his heart and shared with everyone his profound experience from the center of Africa saying: “I experienced this mystery of Pentecost ten days ago in Arusha. When two hundred and fifty children from the forests were baptized in the name of the Father and the Son and the Holy Spirit. When five hundred and fifty children in the school sang and glorified the name of God. And upon leaving when I saw fifty-five children sick with AIDS being given medicine bed and roof” And he went on to say “This, my children, is the Church and this is the Church that the Apostles established. They were illiterate. They were humble fishermen. But the Holy Spirit came to enlighten them and since then the Word of God has been preached.” He also wished in his speech that God give enlightenment to the belligerents and that peace and love prevail.

Particularly touching was the moment when the Patriarch welcomed with tender and loving words the new Cantor of the Greek Community of Cairo, Mr. Alexandros Rigakis, to whom he wished him good luck for his new duties and reminded him with love that all, the Clergymen and the Greek Community, will be by his side in every moment of his ministry in Cairo.

Then all were led by the Patriarch to the Throne Hall where they enjoyed the rich treat of the Patriarchal Committee as well as the pleasant social intercourse. 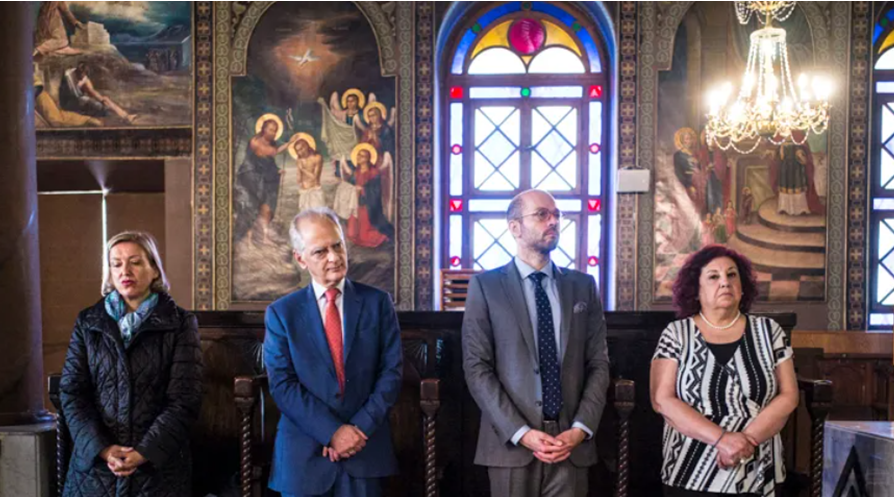 Congo: Laying of the Foundation Stone of the church of the Virgin Mary "Axion Esti"