Archimandrite Nikodemos Angnostopoulos, Chancellor of the Greek Orthodox Archdiocese of Thyateira and Great Britain and Assistant Professor at the University of Notre Dame in England, contributed with a book chapter entitled “Eastern Orthodox Perspectives on Nostra Aetate and Muslim–Christian Relations” to the volume Nostra Aetate, Non-Christian Religions, and Interfaith Relations published by Villanova University. 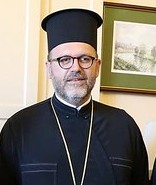 In the light of the ongoing development of the relations and the cooperation between the Roman Catholic and the Orthodox Churches through the initiatives of the primates of the two Churches Pope Francis and the Ecumenical Patriarch Bartholomew, Archimandrite Nikodemos Angnostopoulos analyzes the Ecumenical significance of the Second Vatican Council under an Orthodox perspective.

It should be noted that the convocation of Vatican II was not only a significant religious internal event for the Catholic Church. The Council and especially the “Decree on Ecumenism” and the “Declaration on Religious Freedom” placed the foundation for the beginning of the dialogue between the Catholic Church and the other Christian denominations and religious communities.

The analysis of the contribution is based on these two important documents for two reasons.

First, the “Decree on Ecumenism” makes a special consideration to the relations and the dialogue between the Catholic and the Eastern Churches, acknowledging that from the beginning, the Churches of the East have had a treasury from which the Western Church has drawn, and the fact that the Ecumenical Councils, which held in the East, defined the basic Doctrines of the Christian faith.

Secondly, the “Declaration on Religious Freedom” is directly related to the challenging circumstances that the Ecumenical Patriarchate of Constantinople is still facing in terms of Church administration and religious freedom based on the legislation of the Turkish Republic.

Greek Govt: The implementation of preventive measures is an act of social solidarity