The “Patriarchate of Kiev” includes those parishes (religious communities) that have joined the “Autocephalous Orthodox Church of Ukraine” according to the United State Register of Ukraine, said Priest Alexander Blahov, head of the Moscow Patriarchate of the Ukrainian Church.

As he pointed out, “it is obvious that parishes can not come to this Church, but they have to “move” somewhere.

He underlined that after a research he found out that “the presidents of the Community Councils are holding public meetings in which, with the slogan of joining the Ukrainian Orthodox Church, they changed the jurisdiction of a religious community of the Ukrainian Orthodox Church of the Patriarchate of Moscow while actually it is a “transition” to the Patriarchate of Kiev.”

Father Alexandros illustrated his argument with a recent example of the community of the village Vorsovka (Zitomir region). On January 11, the community voted for the accession to the Autocephalous Orthodox Church of Ukraine, but for some reason, from January 20, 2019, it was found out that it was under the supervision of the “Ukrainian Autocephalous Church – Patriarchate of Kiev”.

On the official site of the United State Register of Ukraine, where the former religious community of the Ukrainian Orthodox Church of the Patriarchate of Moscow is registered in the “Patriarchate of Kiev” (see the photo below). 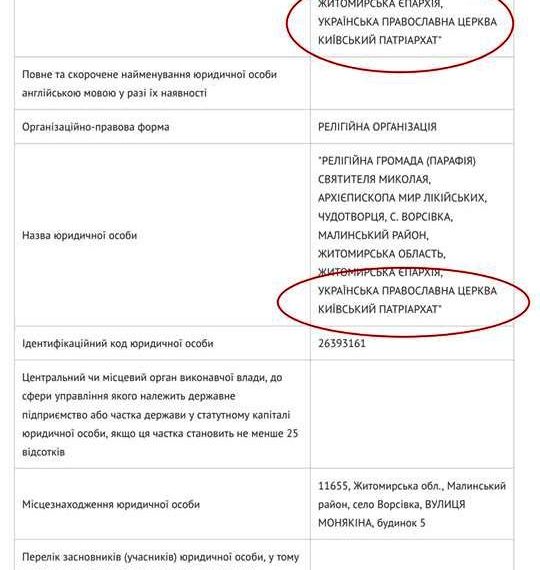 The President of Ukraine visited the Church of the Holy Sepulchre