Synaxis of Holy Archangels was celebrated in Dacher, Cairo

On Friday, November 5, 2021, the Synaxis of the Holy Archangels Michael and Gabriel was celebrated with great brilliance and with the participation of a large number of believers, in the homonymous Arabic-speaking parish of Dacher in Cairo, which this year celebrates its 90th anniversary.

On Thursday, November 4, 2021, Patriarch Theodore II of Alexandria and All Africa officiated the Great Festive Vespers, accompanied by Metropolitan Theodosios of Kananga and the clergy of the Alexandrian Throne in Cairo.

In his speech, the Patriarch referred to the 90th anniversary of the parish of Dacher.

On Friday, November 5, 2021, the Patriarch of Alexandria presided over the festal Divine Liturgy, accompanied by Metropolitans Georgios of Guinea, Nikolaos Ermoupolis, the Patriarchal Vicar on the Arab-speaking faithful, and Theodosios of Kananga.

They were also accompanied by the Great Ecclesiarch of the Patriarchate of Alexandria Archim. Stephanos Soulimiotis, the Abbot of the Holy Patriarchal Monastery of Saint Georgios in Cairo, Archim. Damaskinos Alazrai, and many clerics of Cairo.

In his speech, the Patriarch expressed his joy that he is again with the Arabic-speaking flock to celebrate this time with them a double feast, that of the Synaxis of the Holy Archangels and the 90th anniversary of the cathedral in Dacher.

In addition, the Patriarch offered the patriarchal kritaton to the Parish, saying: “I want to give something small, something of my own to your Church. I want to leave my kritaton and when you see it, my president, remember that Patriarch Theodore still loves Dacher.”

Prior to the dismissal, the Patriarch awarded the Golden Lion of the Order of the Lion of Alexandria to Camel Hanna, a member of the Ecclesiastical Council of the Dacher Parish, thus honoring his many years of service to the Cathedral of the Holy Archangels and the Patriarchate.

Addressing Camel Hanna, the Patriarch said: “Dear Camel, I want to honor you with the Golden Lion of the Order of the Lion of Alexandria, thus thanking you for your contribution to Dacher Church.

But I thank you personally for your good and beautiful family and your reverent children. Our Egypt is based on good families, on children who have been raised properly. If we want good societies, we must have good families.”

Finally, it is worth noting that for the sake of sanctification and blessing of the faithful, the Abbot of the Holy Patriarchal Monastery of Saint Georgios in Cairo brought the Holy Relics of the Holy New Martyrs Gabriel and Kyrmidolis in the celebrating church. 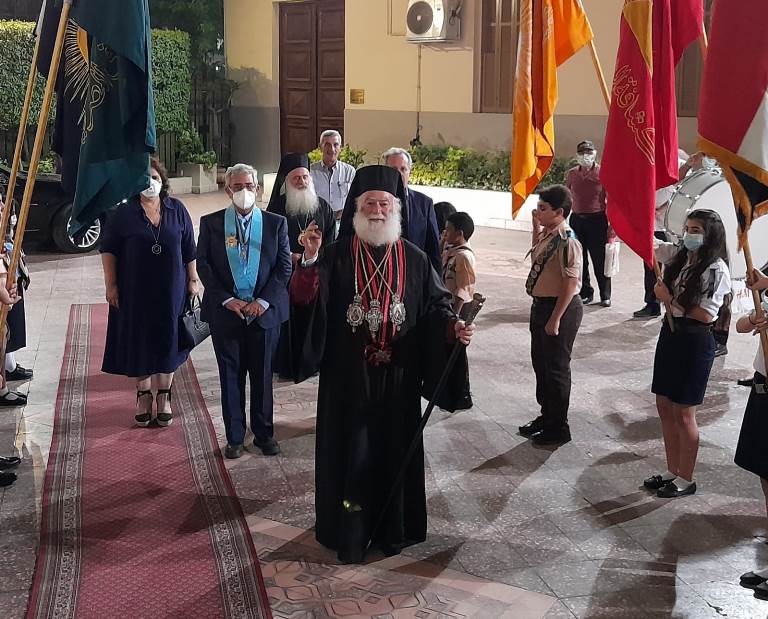